Let the windy weather begin… this group was here at the start of our 2 weeks of wind, wind wind. They were limited to certain parts of the lake, but found multiple locations where they could catch large Walleyes in good numbers. They said Dobie has great fishing and lots of water to explore. Their biggest Walleye was 23 inches and their biggest Northern was 38 inches. They caught a few in the 36-38 inch range. The best bait for Walleye was yellow twister tails with white jig heads and their biggest Northern were caught on the same! The best spots were drop-offs and edges of weedbeds in 8-15 feet of water.

Despite the poor weather, this group still caught lots of Walleye and Pike. Their biggest Walleye was 26.5 inches and their biggest Pike was 36 inches. The best bait was pink, orange, and yellow jigs with minnows. They fished the points in 12-20 feet of water when they were able to get out on the water.

In 30 years of fishing in Canada, this was the worst weather this group has ever had! They experienced a couple days of excellent fishing, but once the wind started things went down hill. The days of rain, wind and cold were really poor. They still caught fish into the hundreds, but not what they are used to at McVicar Lake! Their biggest Walleye was 22 inches and biggest Pike was 27 inches. They found jigs and minnows to be best for Walleye fishing and Rattle Traps best for Pike. The Walleye were in deep holes, 30-35 feet down. The Northern were along shorelines in 10-15 feet of water.

This group writes “Despite 5 days of rain and wind, we had a great trip!” Unfortunately we cannot control the weather so it’s whatever you make of it! They still caught enough fish to be satisfied including a big 25 inch Walleye and a nice 37 inch Northern. Minnows and jigs worked best for Walleye and Spoons for Northerns. The best Walleye spots were in moving water in 6-8 feet and the best Pike spots were in the weeds in 4-6 feet of water.

These two had a short trip to Richardson and of course lost 1.5 days of fishing due to high winds and storms. They caught a few Walleye, the biggest being 26 inches and some Northern including a 31-incher. Any colour of 1/8 oz jigs worked with minnows. They had some luck with 8” Jake Crank and Spinners for Northern. The best spot for them was the reefs off the small island (directly Southeast) in 3-20 feet of water.

These three had a great time at Una Lake. They said it was an excellent Outpost with great fishing! They mainly fished mid-morning to early evening and at first had a hard time finding fish under 18” to eat! They managed to get enough “eating-sized ones” for dinner each night. Their biggest Walleye was just shy of 22 inches. They had best luck with orange/green jigs with minnows and they fished reefs in 5-14 feet of water. 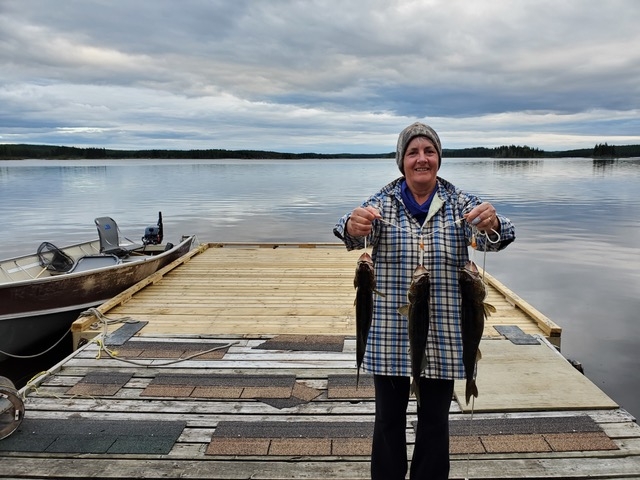 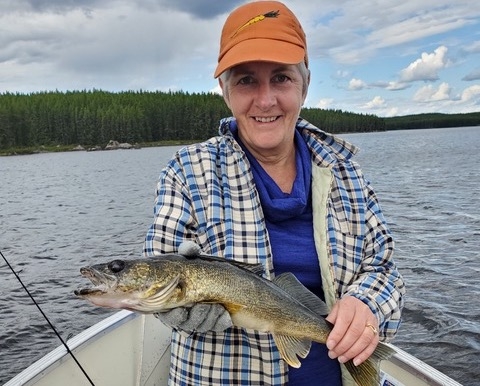 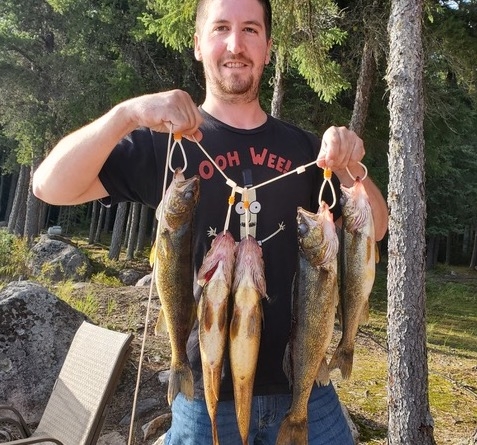 These 5 guys caught about 300 Walleye each and a bunch of Northern during their stay at Kapikik. Their biggest Walleye was 26 inches their biggest Pike was 35 inches. The best bait for Walleye was jigs with crawlers or minnows and the best baits for Northern were gold spoons, or jigs with live bait. They found Walleye and Northern in similar spots… mainly deeper holes, points, and in current, anywhere from 5-25 feet deep. They said the accommodations were great, service was great, and it was an awesome week of fishing!

This group was new to Kam and thought it was a great lake! They said they will be back. They caught “many Walleye” and about 50 Northern. Their biggest Walleye was 22 inches and their biggest Pike was 31 inches. They fished with jigs and minnows or crawlers for Walleye and Silver Minnows worked well for Northern. The Walleye were on reefs and weedbeds in deep water up to 30 feet. The Northern were on weedbeds and quite shallow.

Although the weather was starting to look up at this point, it still wasn’t great! This group of guys are no strangers to Fawcett and they struggled a little with the fishing mainly due to the poor weather. For Walleye they fished with jigs and minnows, swimbaits, and crankbaits along shores, points, and drop-offs in 8-20 feet of water. They managed to catch some nice ones including a 25-inch Walleye. For Northern they fished with swimbaits in all the same places as Walleye and they boated a nice 42-incher! They commented on our quick and efficient check-in process, which allowed them to quickly get on the plane and get to their favourite fishing spots!

As the winds died down, the cold and rainy weather set in. The surface water temperature on Snelgrove was 55 degrees and below 10 feet it dropped to 48, which made for some sluggish fish. The air temperature hovered around 50 degrees with very little sun. These folks were targeting Walleye with minnows and Mepps French spinners. They found them on the reefs and points and in the rocks, 11-16 feet deep. Their biggest Walleye was 22 inches and their biggest Northern was 31 inches. All Northern were caught while Walleye fishing.

We had a crew from the “All Canada Show” stay at Okanse this week… although, I’m sure they used the minnows that were sent in, they wrote the best bait for Walleye and Pike were the 2019 All Canada Spoons! They had some great fishing with about 750 Walleye caught and 70 Pike. Their biggest Walleyes were 21 and 22 inches and their biggest Pike was 39 inches. They fished all over the lake at all different times of day and found fish in mainly 10-15 feet of water. They said it was a great cabin, great lake, and they had a great time!

The bad weather affected the fishing for a couple of days with high winds and waves. Overall, this couple managed to caught about 145 Walleye and 77 Pike. They did well jigging and trolling for Walleye and the best spot was the reefs at the North end of the lake. They used minnows and jigs and also did well along shorelines and weedbeds in 10-12 feet of water. The Northern fishing was best at the South end while trolling with spoons and minnow lures. They caught a couple 40 inch Pike! The Northern were in 4-12 feet of water. They saw some wildlife including bears, otters, moose, mink, and rabbits! They had a great time and said the fishing was good and so was the staff.

These two booked VERY last-minute and headed up to Anishinabi for some adventure. They went around to a bunch of the portage lakes and targeted Walleye, Northern, and Trout. They caught about 50 Walleye with the biggest being 21 inches. The best bait for Walleye was minnows and jigs and they were about 16-19 feet deep along shorelines and channels. They used spoons for Northern fishing and caught about 100 between the various lakes. Their biggest Northern was 38.5 inches long. They caught about 40 Trout and the biggest was 25.5 inches long.

This couple had a great trip and really hooked into some big Pike! They got two 40-inchers, a couple 38’s and a 35 inch. The weather affected the fishing from day to day… on the nicer days, the fishing certainly improved. Their biggest Walleye was 18 inches. When Walleye fishing, they used jigs and minnows and had the best luck on the Northwest shoreline along rocks and away from weeds. The Walleye were about 6 feet deep and the time of day didn’t matter. For Northern they used crank baits, rattle traps, and minnows and fished the same spots as Walleye. They lost a lure to one big fish and managed to catch the same one 2 hours later and retrieved their lure! That doesn’t happen very often. 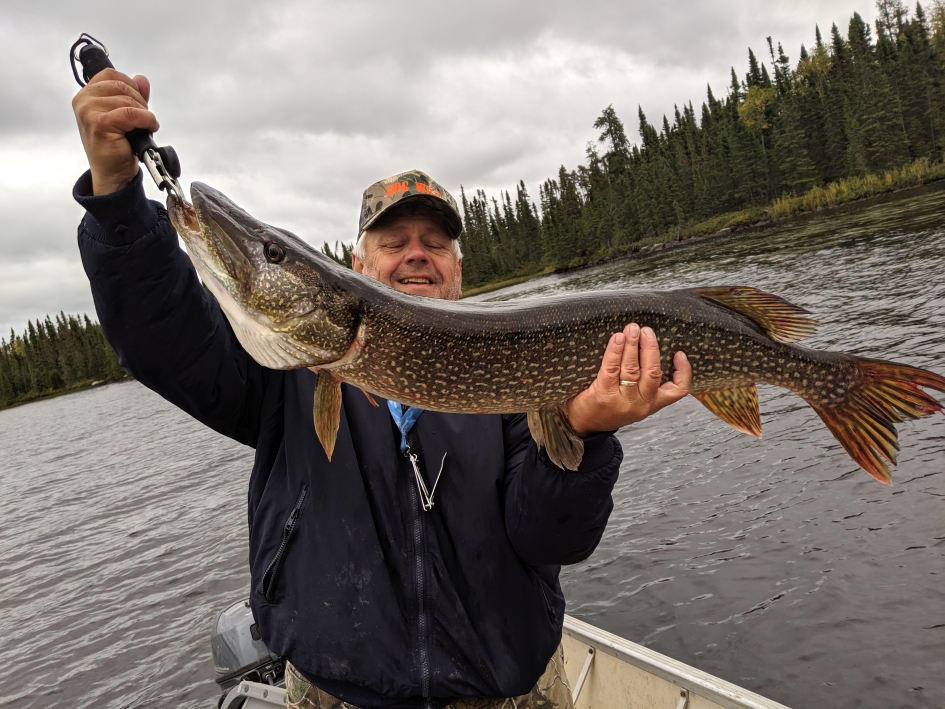 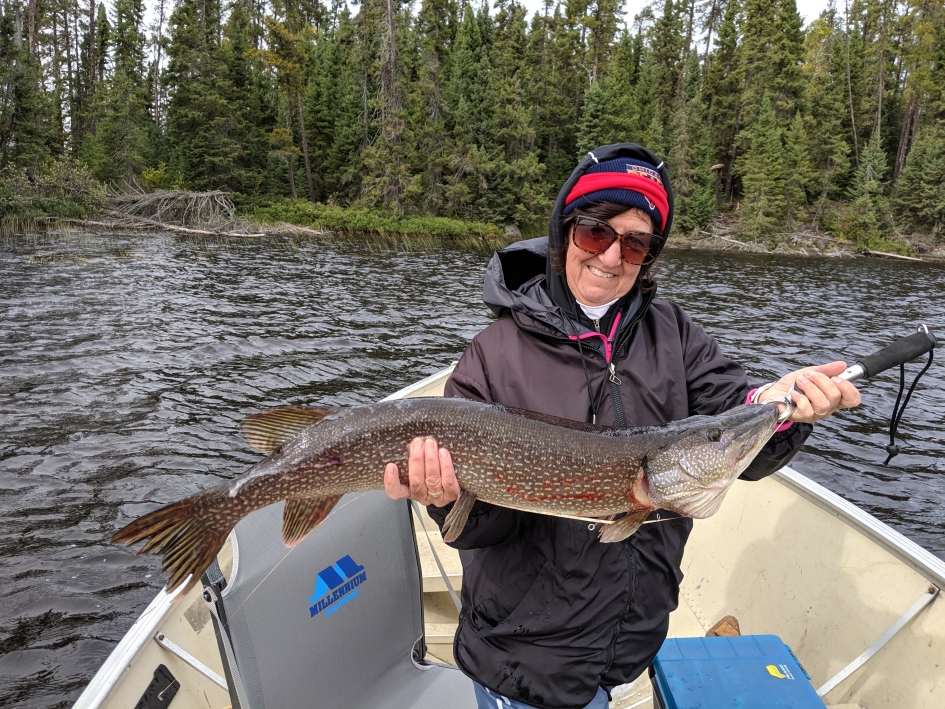 Our last group at Bertrand had a good trip. They caught over 600 Walleye and the biggest was 25 inches.They used jigs and minnows. In one stretch of 165 minutes, they caught 100 Walleyes and 6 Northerns! They didn't share the hot spot... they said it's a big secret, but it's somewhere with 12 feet of water. They caught about 80 Northerns including one huge on off of Wayne's dock!

These guys had a good trip, as always... They had the best luck at the spots marked on the map and around the dock. Their biggest Walleye was 22 inches and their biggest Pike was 32 inches, although they did not fish for Pike. The best bait was jigs and minnows and the best time of day was mid-morning and late afternoon. The Walleye were in 6-10 feet of water.