Our guests did fantastic with the Walleye fishing, but those chasing Muskies had a harder time. This cold weather made the Muskie go into hiding. They weren’t nearly as active as weeks before. The Crappies were back in action this week so between those and the Walleye, everyone caught plenty to eat every day.

It was a slower week on the Chain and the weather didn’t help. In between thunderstorms and high winds, everyone caught a good amount of fish. Everyone ate Walleye everyday and they had a fair bit of Muskie action. All in all everyone caught fish and had a good time.

Despite the cold, windy, and rainy weather this group caught about 1,500 Walleye. They fished using ¼ oz jigs with live minnows. The fishing was best around reefs, points, and islands in 9-14 feet of water. The largest Walleye caught was 29¼ inches. They did not fish for Northern, but had a 32-inch try to swallow their Walleye. That was the biggest Northern caught. They enjoyed the accommodations and new 15 HP motors. They said that the minnow supply made all the difference.

This group figures they caught 50 Walleye per man per day. They fished with minnows and crawlers on fuzzy grub jigs or phelps floaters. They fished in 18-feet of water. The best spots were the Lang gap, and the 3rd small island on Northeast McVicar. Even though they had a little sunburn on their faces, this group saw A LOT of rain over the week! All in all they had a great time and will be back next year.

This group caught 997 Walleye on Bertrand Lake. They fished using Lindy rigs and minnows in 8-13 feet of water around humps and points. The largest Walleye caught was 22-inches. They did not fish for Northern, but caught a few by accident – the biggest being 48-inches! The weather was cloudy, cold, and rainy. They only seen the sun for a couple of hours the whole week

This couple caught lots of Walleye. They explored the entire lake. The biggest Walleye caught was 21-inches. The biggest Northern was 35-inches. They had rain every day that they were there, but still had a fabulous time.

This group caught about 150 Walleye per day per boat. They had the best fishing on the last day; each person caught about 100 Walleye. They found Walleye in 15-20 feet of water, mostly on reefs and fished with jigs with twister tails or minnows. The biggest Walleye was 23-inches. They caught about 10 Northern per day per boat and the biggest was 32-inches. They caught them by accident while fishing for Walleye. They said the weather was odd for early August. The wind switched several times with temperature changes.

They caught too many Walleye to count. They fished using minnows in anywhere from 8-22 feet of water. They caught some Walleye over 25-inches. The best spots were drop-offs and reefs. They caught a 40-inch Northern while Walleye fishing on a jig and minnow. They had cold and rainy weather, but outstanding fishing both in number and size. They wrote more about their trip, but I have to figure out the puzzle first to get the rest of the story. 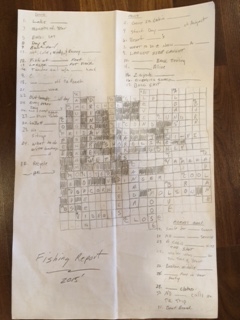