The Walleyes are still not concentrated on the rock piles like normal… Everything is about two weeks late. Fish are still being caught, however, some days they are in the weeds, some days in 20-feet of water, and some days in 10 feet. We finally had some hot summer weather so things seemed to start picking up towards the end of the week. Another plus is that the May fly hatch is finally over!! Next week’s report should be about normal for July.

Fishing on the Chain was about the same as on Cedar. They never knew from one day to the next where the Walleyes would be or what they would bite on. One day they were bunched up on the rock piles and the next day they were in the sticks. It made the fishing fun and interesting! The Lake Trout were very lazy, still feeding on the remaining May flies. This should turn around for us next week. The Muskies are very active, even biting on Walleyes being reeled in!

The weather was perfect with light winds, temps in the 70’s and partly cloudy each day. This group found hundreds of fish on their fish finders suspended in deep water (25-45 feet). There were fish at all depths, but they threw everything at them with very little luck! They had more success in shallow water on the large reef South of the cabin in only 2.5-6 feet of water. They caught Walleye of all sizes from 12-22 inches. They also made the trip to the North inlet and caught fish in the 15-20-inch range. They also had luck right off the dock! The Walleye became more aggressive towards the end of the week… maybe because of the nice stretch of hot weather or maybe because of the May fly hatch finally being over! Their biggest Northern was 42 inches and their biggest Walleye was 22.75 inches. They also caught a good number of Saugers and a few Perch. They enjoyed watching the 6 mature Bald Eagles visiting their gut pile each day. 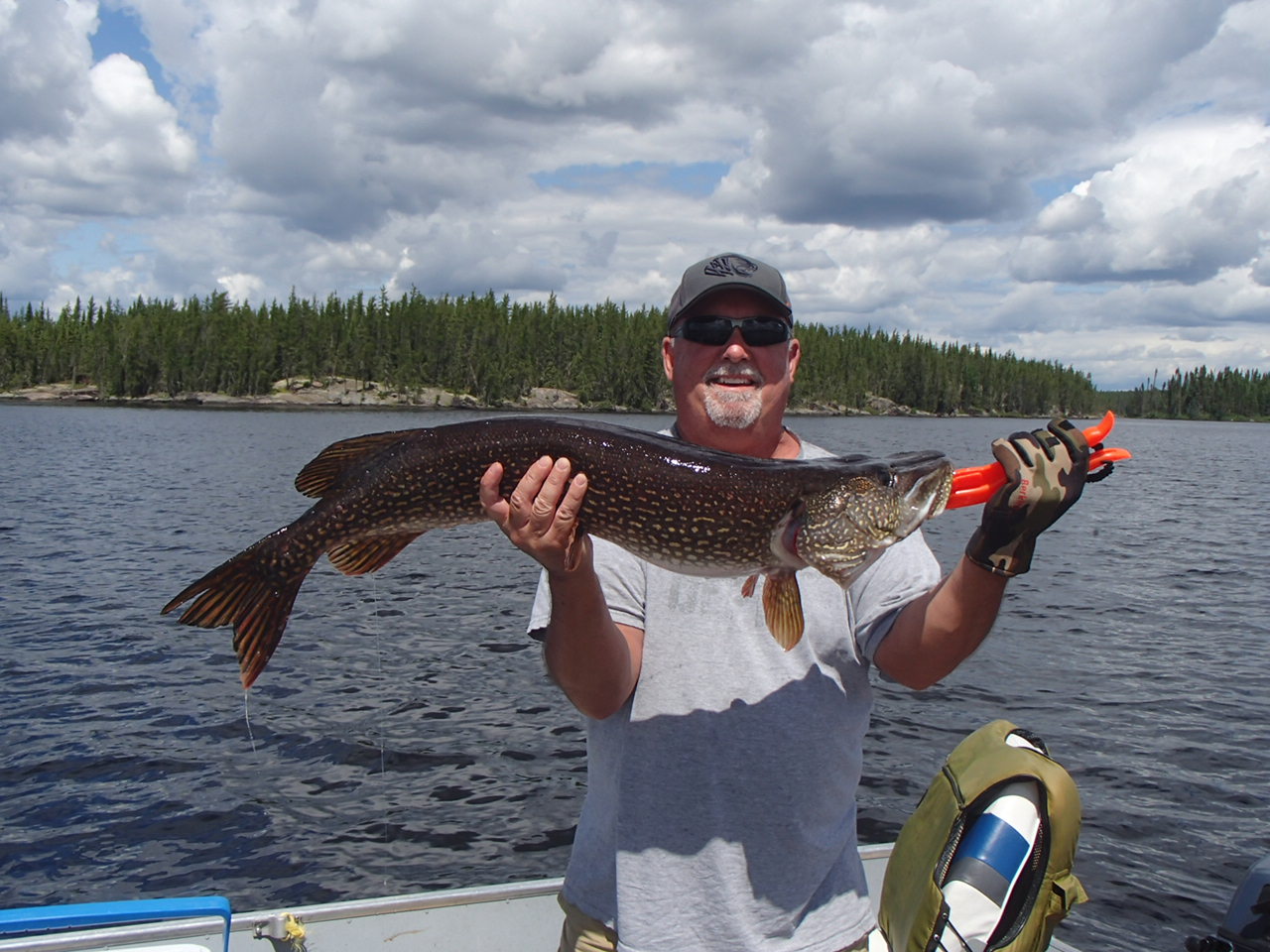 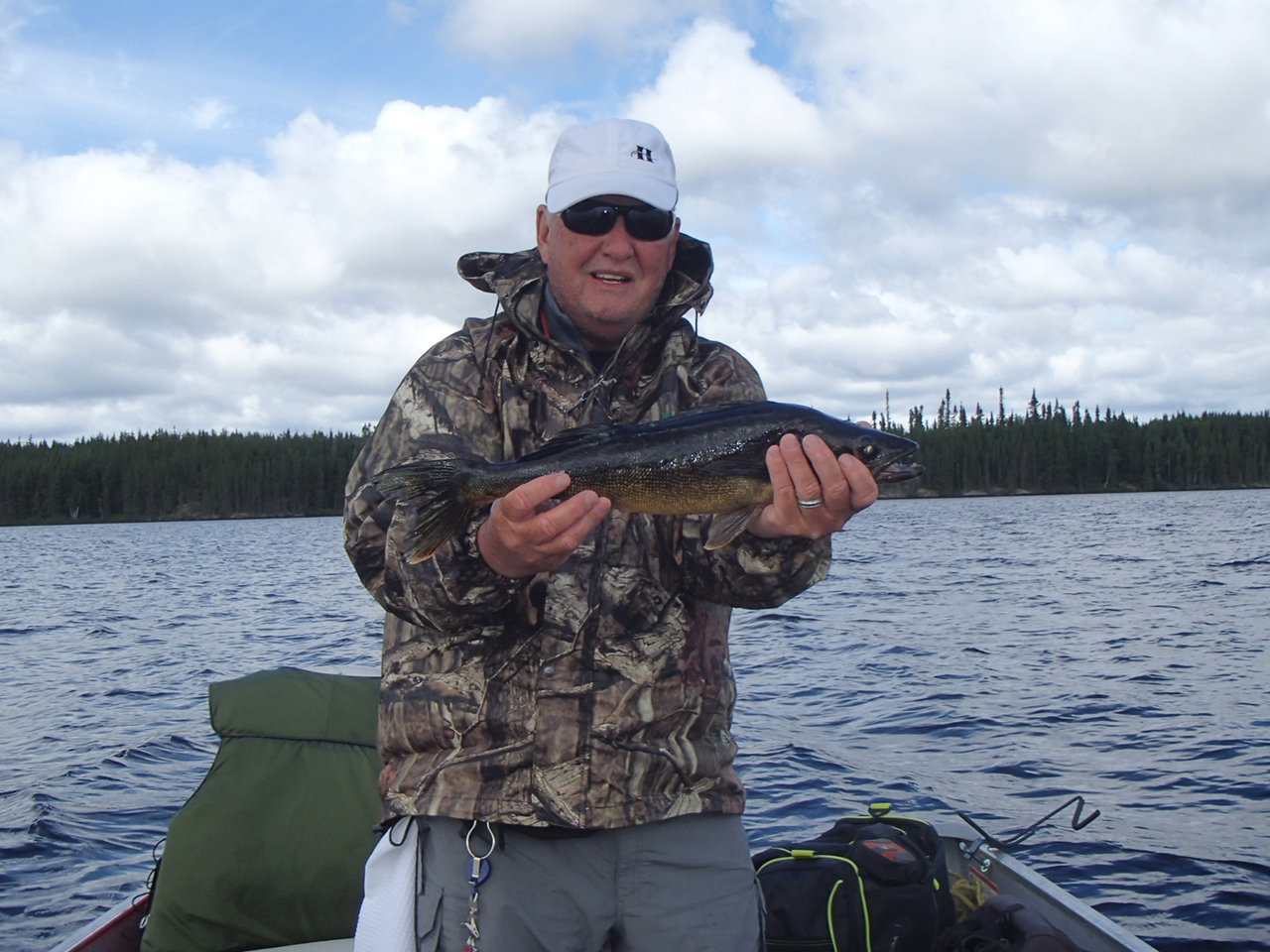 These four guys had phenomenal fishing on Snelgrove this week… they caught over 1,400 Walleye and 139 Northern. Their biggest Walleye was 25.5 inches and biggest Northern was 36 inches. They fished Walleye with jigs tipped with minnows, twister tails, or Gulp. The Walleye were on the shorelines, on the reefs, and in the weeds. They were in 3-11 feet of water and the best bite was from noon until dark. The Northerns were caught while Walleye fishing. They found most of their “eater”-sized Walleye in the bay to the left of the cabin. On Friday evening, two people caught about 100 fish in 2 hours on a reef that was marked on the map. They said this was one of the best outposts they have ever been to and were very impressed by the size of the fish and the fight that each one put up! They also saw 3 caribou, 1 bull moose, 2 calf moose, and had 6 bear sightings! 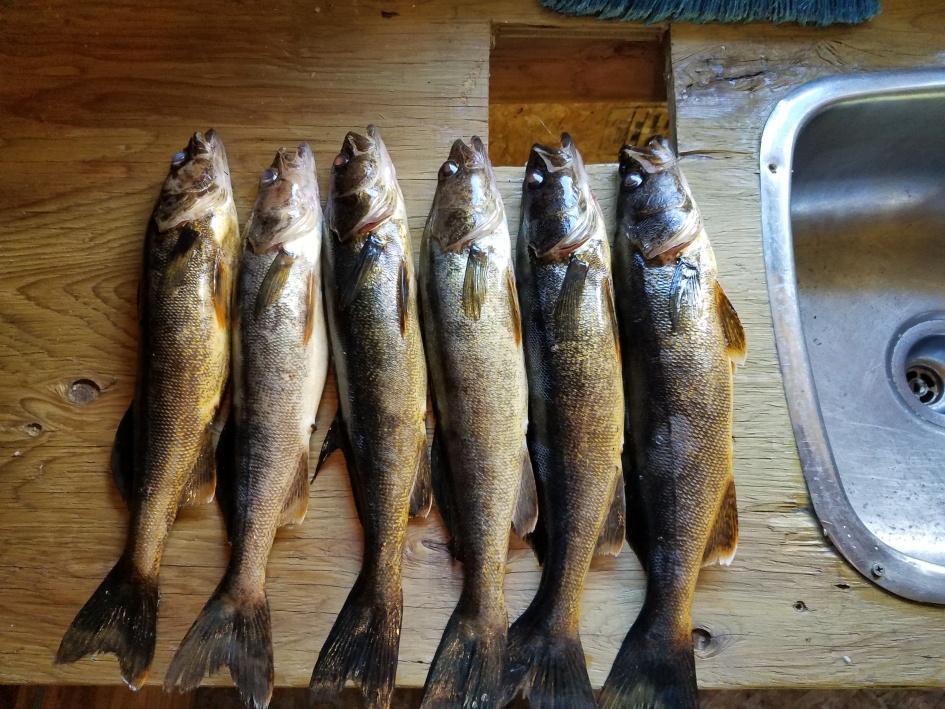 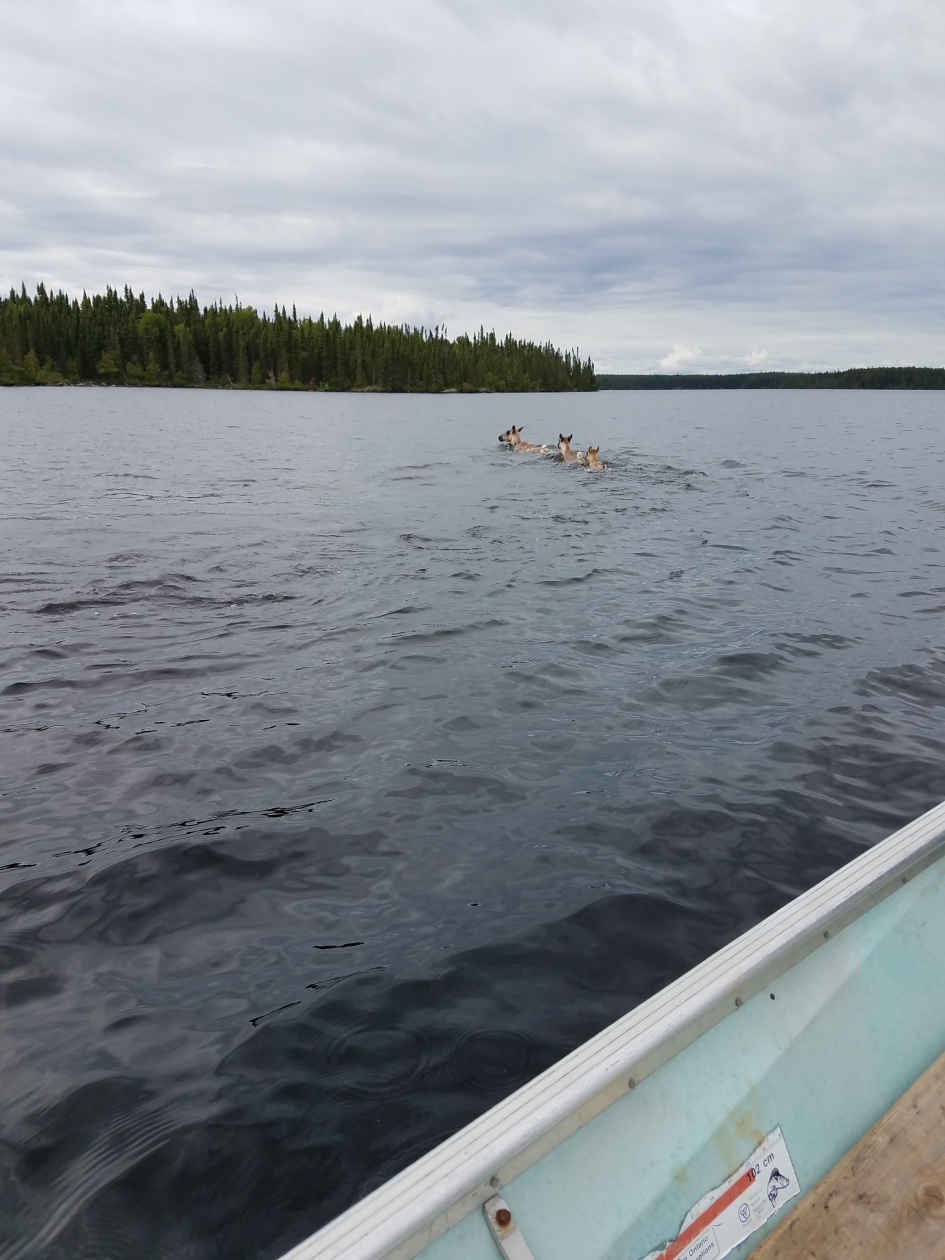 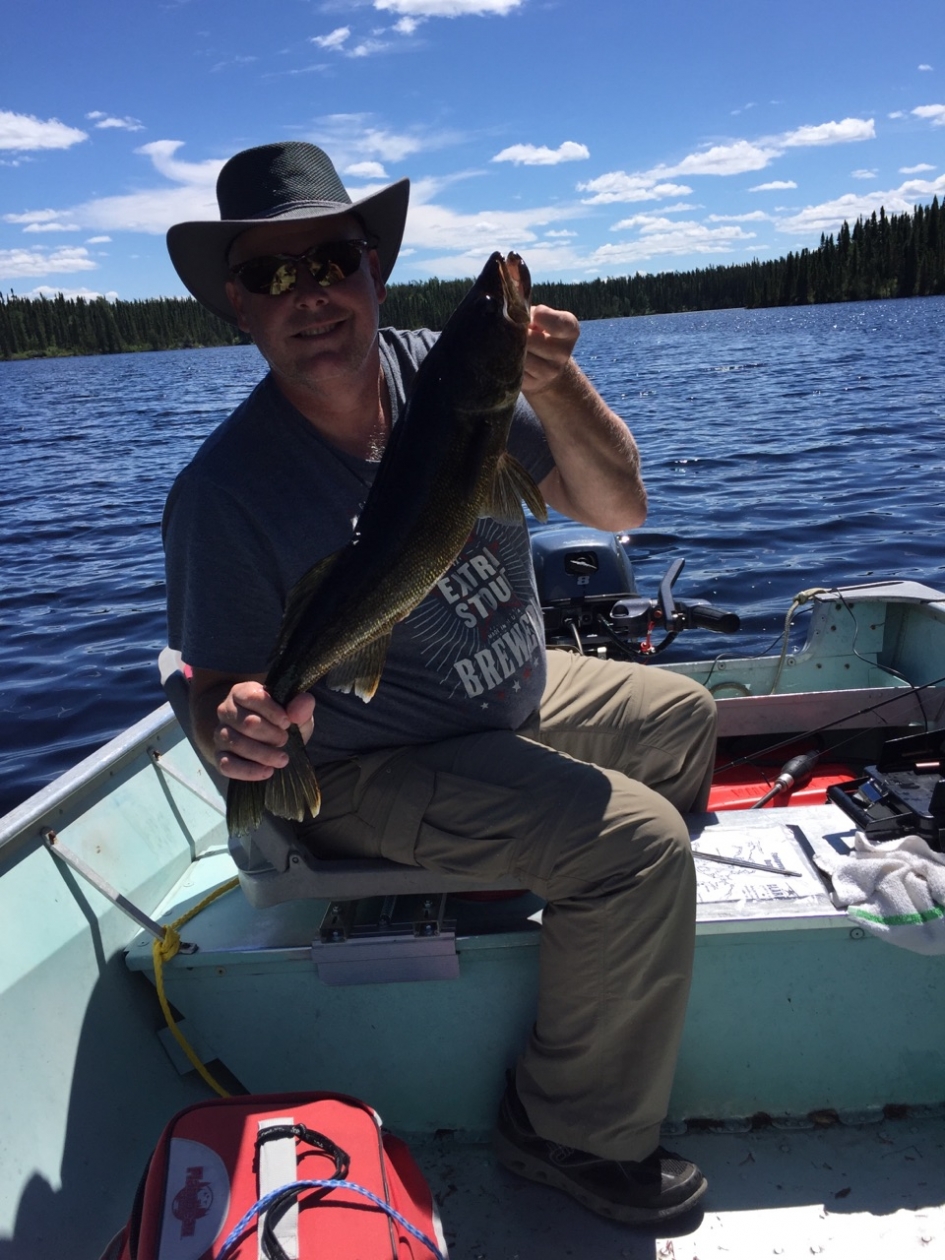 This father and son duo caught hundreds of Walleye and a few Northern. Their biggest Walleye was 20 inches and their biggest Northern was 30 inches. The Walleye and Northern were biting along the shorelines and on the points. The rock structure on the Northeast point was the “honey hole”. Another good spot was straight off the dock across to the weedbed. The Northwest shoreline was the best. Walleye were biting on spinners and jigs with minnows. Northern were biting on spinners and crankbaits. All fish were in 8-12 feet of water.

840 Walleye were caught and the biggest was 27 inches! The best bait was jig heads with twister tails of any colour. The best spots were the North East river, the island points, and the South end of McVicar. The Walleye were in 12-15 feet of water. They caught 340 Northern and the biggest was 35 inches. The Northern were in the weedbeds, along island points, and around rock piles all in 15-20 feet of water.

This group of only 3 caught 535 Walleye, three of which were 25-inches! They mainly used jigs and minnows. The Walleye were on the reefs from 3-20 feet of water. The best bite was from 10 am to 3 pm. They caught a few Northern while fishing for Walleye and the biggest was 35 inches. On the last day they caught one Walleye ever 72 seconds from 10 am until 3 pm! 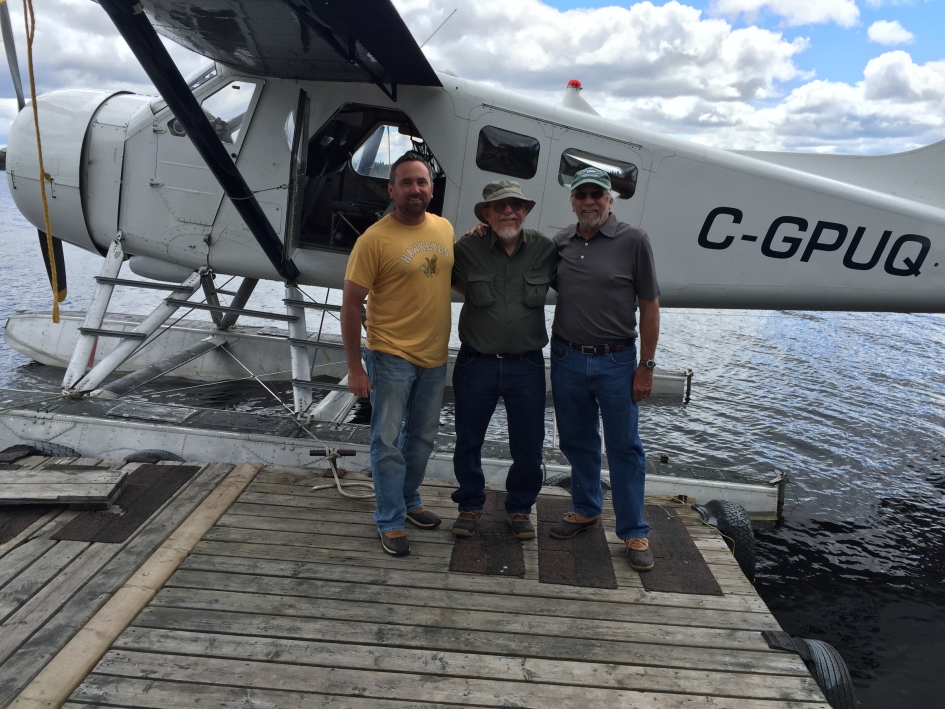 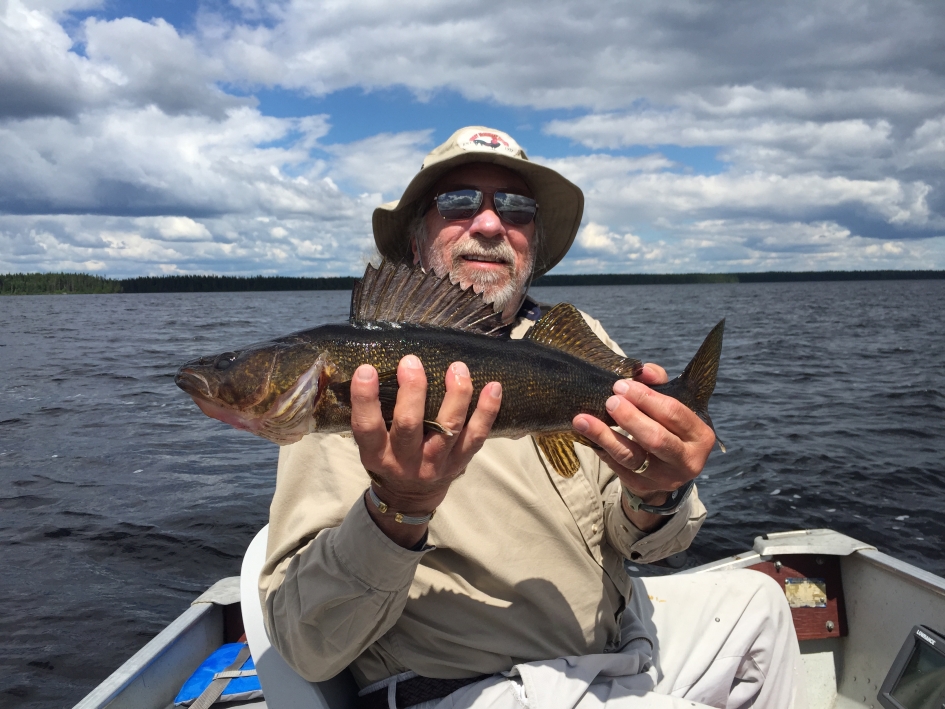 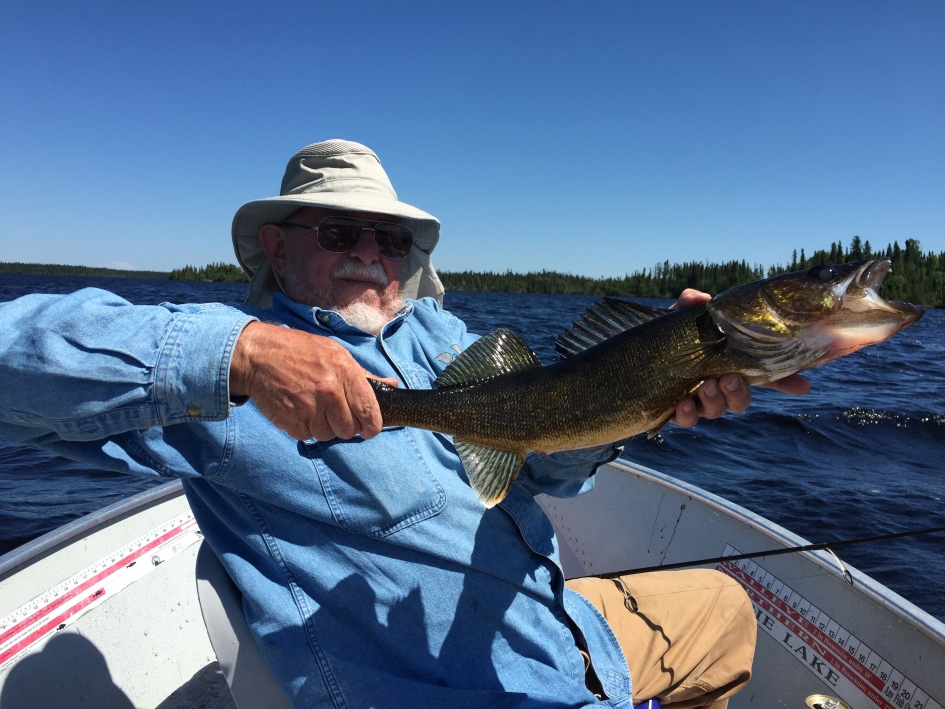 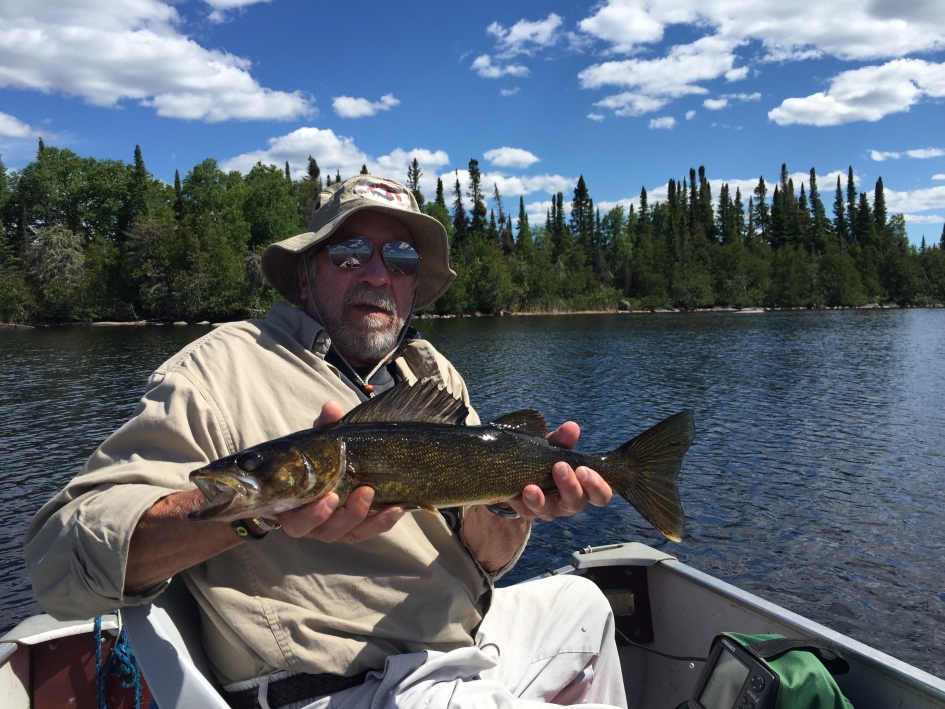 This crew caught about 1,000 Walleye and 100 Northern. They said the fishing was slow due to two large May fly hatches, 85 degree days, and strong winds. They still had a great stay and commented on the great facilities and service. They used minnows and split tail grubs for Walleye. They found them along shorelines, on the reefs, and in the weedbeds in 4.5-7 feet of water. The biggest Walleye was 21.5 inches. The Northern were in the same places and the biggest one caught was 35 inches.

This group caught 100’s of Walleyes and over 30 Northern. Their biggest Walleye was 26 inches and their biggest Northern was 36 inches. They fished for Walleye with minnows and jigs, also spoons and some other various lures. The best spots were the root river, and the main spots on the lake in 10-20 feet of water. The Northern were biting on spoons along the rocky shorelines and points. They were also biting good by windy banks. The fishing was good all day long.