The hot weather made fishing on the Chain slower this week than usual. The Musky action was still really good and everyone got enough Walleye to eat. We heard of a “hot spot” on Edward Lake however that did not slow down one bit… one Walleye after another. Below are some pictures of some really nice fish caught… a 20-inch smallmouth, a 26-inch walleye and a 46-inch musky… all caught on the Chain this week. 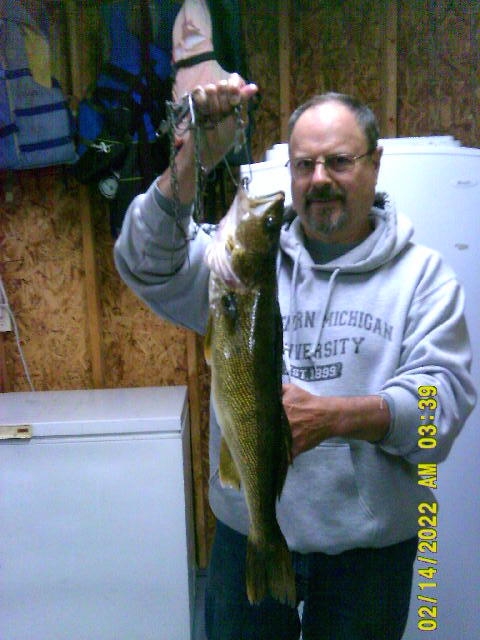 Depending on who you talked to, the beginning of the week was a little slow for Walleye, however some people were still finding them with no issues. They may have been harder to find as the extreme hot temperatures played a factor for sure. The weather was all over the map with some very hot and humid days and lots of rain. The fishing really picked up towards the end of the week though. Lots of Muskies were seen again this week. The hot weather is making them really active.

This group caught lots of Walleye despite the cool, wet, and windy weather. The best bait was jigs with leeches. They fished in 9-15 feet of water all over the lake, but the best spots were around islands and off of points. The largest Walleye was 25 inches. They caught “too many” Northern while Walleye fishing. They had a few grab their Walleyes as they were netting them at the boat. The largest Northern was 35 inches.

In spite of the poor weather (heavy downpours and strong winds), this group caught 1,133 fish for the week. They noted that the wind would change directions at least 3 times a day! The best bait for Walleye was minnows and the best depth was 11-15 feet of water. They also caught them as shallow as 8-feet and as deep as 20-feet. Most of their big Northerns were caught in 16-20 feet of water while fishing for Walleye. The biggest Walleye was 25 inches (of which they caught 5) and the biggest Pike was 39 inches. They also caught a 38-inch Northern, two 37-inch, two 36-inch, and two 34-inch. The best time of day for fishing was between 8 and 10 a.m. and from 4 to 6:30 p.m. The best spots were the “Southern Hump”, the island to the East of the cabin, and behind the island across from the cabin. They were very impressed with the recent upgrades to the cabin and they had a great week.

This group caught 100’s of Walleye. They fished with white jig heads with either white twister tails or minnows. They found Walleye in 10-14 feet of water along shorelines and reefs. The best time of day was mid-morning and the largest Walleye was 23.5 inches. They also caught 100’s of Northern. The best lure for Northern was Dare Devils. They found Northern in 8-10 feet of water along weedbeds and the best time of day was afternoon in the bright sun. The largest Northern caught was 42 inches

We had a group of 13 people go to Kam this week – a mix of kids and adults – all family. They had a great time getting away together away from technology. Lots of quality time spent as a family and of course, lots of fish caught! Their biggest Walleye was 22 inches and their biggest Northern was 45 inches. They witnessed two moose crossing the lake, which is an incredible sight to see.