The Musky action on the chain was great this week.They were hanging out in all our good walleye holes making the walleye fishing a bit like the old story go's (if you want to catch musky, go walleye fishing!) But still plenty of Walleyes caught.The early morning and evening bite was the best. Edward, Indian, and Forest Lakes were the best producers of Walleyes. Northern Pike are still in the reeds and Lilly pads. The river had lots of pike action as usual. Lakers are active on Boulder and Augite... always fun to portage into Augite and have the lake to yourself!

The West end of Cedar was good this week. The Walleye were biting close to camp, which is always nice. The evening bite was best. You could actually go across the bay and catch your limit right in front of camp! The Perch have also been biting really good with a few nice sized-ones too. The Smallmouth fishing was hot! The Musky on the other hand... lots of sightings, but they are too lazy to bite on anything!

These guys had a BLAST at Antenna Lake! They mainly targeted Northern and they caught tons in the high 30-inch range. Their biggest Northern was 41 inches and it was caught right off the dock! They also caught a 39.5 inch and a 38-inch. They couldn’t believe the fight that these Northern put up. Their biggest Walleye was 23-inches and it sounded like they mostly used live minnows for Walleye fishing… until they left the lid off the minnow bucket then that was the end of that! They used a variety of lures for Northern including Mepps, Rapalas, Daredevils… anything brightly coloured. For a couple of days in the morning, surface jerk baits worked good… the Northern hitting those were smaller, but the action was fun. 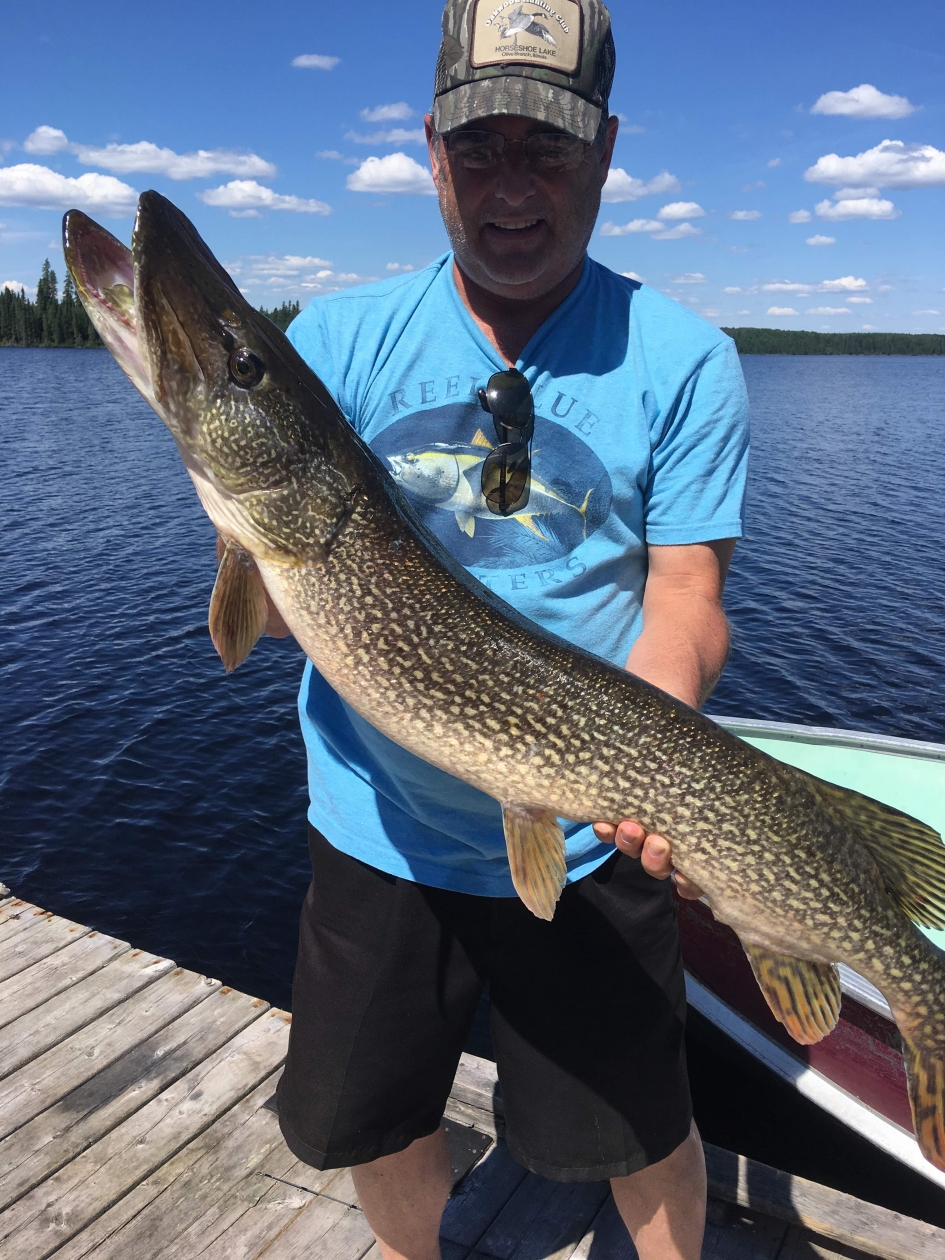 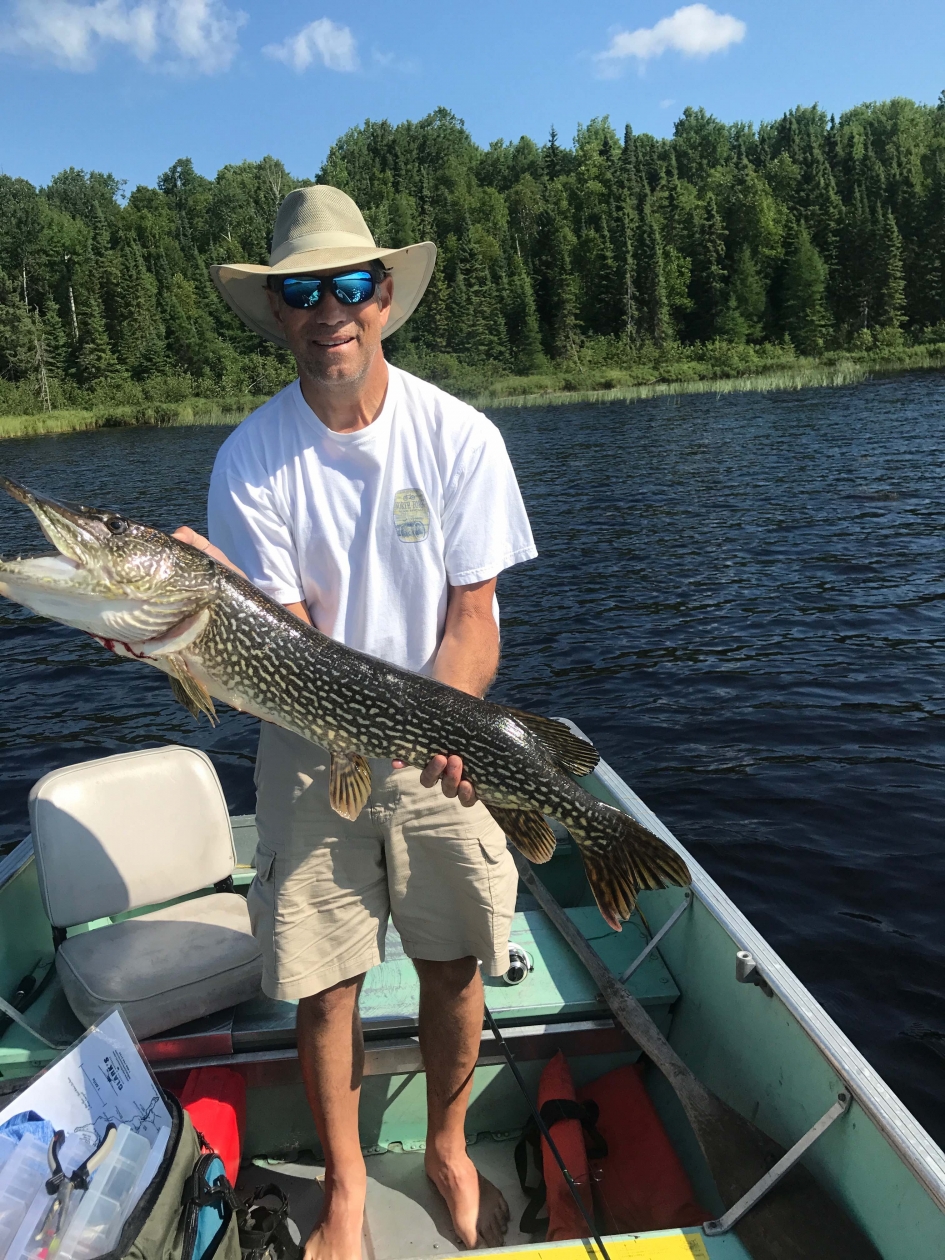 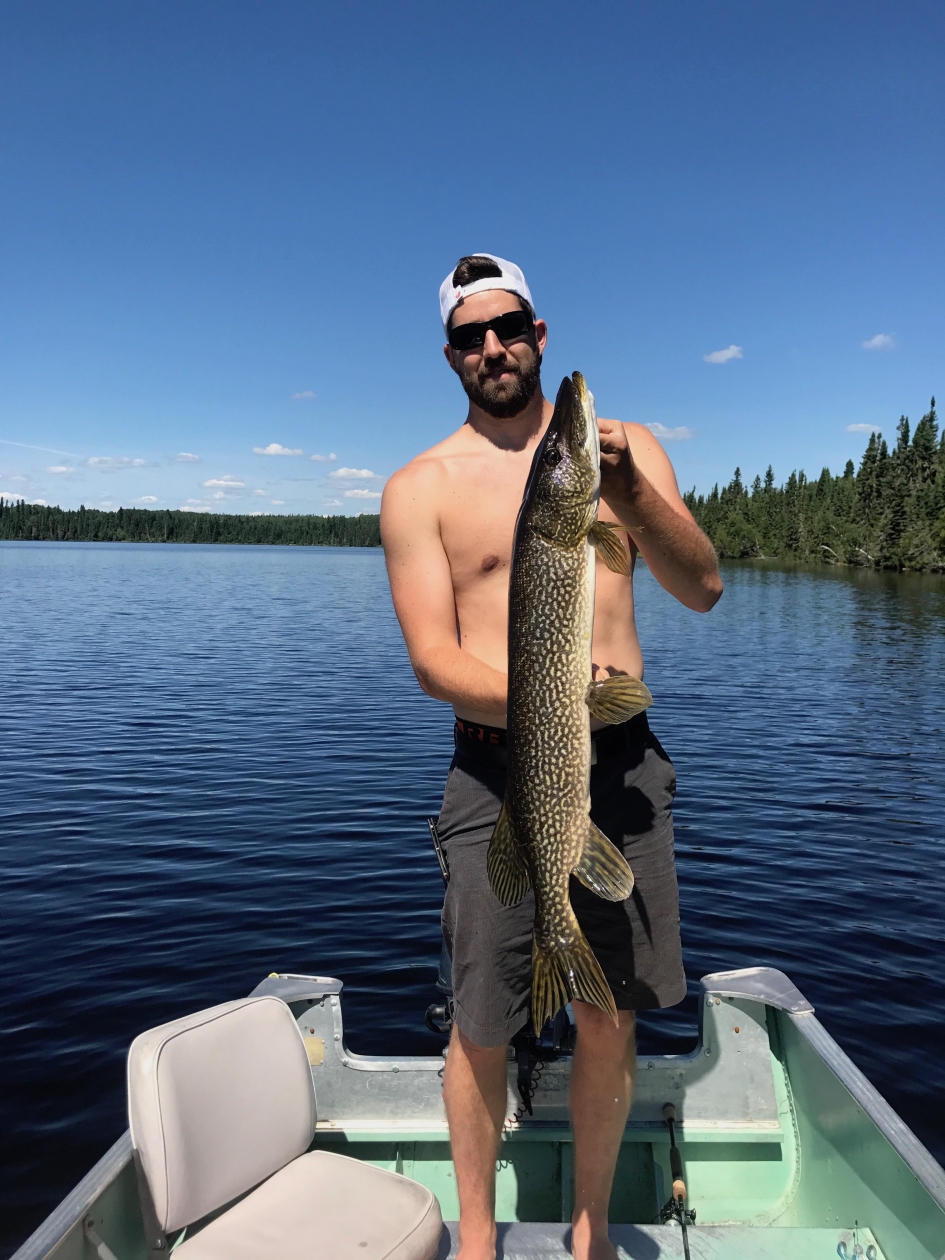 This group hit great weather on their vacation! The caught 1000 walleye with the longest reaching to 25 “. The walters bit on jigs, crawlers and minnows, any time of day, usually in deep water. The northerns were also biting on almost anything. The group said that they used all different sorts of bait and it all worked. They ended up catching 121 northern this week with the longest reaching about 29” long.

This group of 6 had a busy week on Fawcett. The walleye fishing was great, each person catching anywhere from 50-75 walleye per day with the biggest walleye reaching 25”. They used white and chartruse jigs with minnows and found them all day in 10-15 feet of water. I quote that “the walleye were BIG, THICK and PLENTIFUL”. While searching the lake for walleye and using the same bait, this group found some northerns as well. Each person caught about 15 northern everyday, in 10-15 feet of water. The trophy Northern of the week came to 34 inches long!

This party of four were able to find some fish! They caught 1080 walleye with the largest being 28.5” long. They also said they caught 4 walleyes over 25” throughout the trip. They mainly used jigs and Wayne’s minnows and caught them while trolling islands and reefs. The best time of day for them to catch walleye was 6:00 pm- 9:00 pm in about 10-20 feet of H2O. This group brought in 36 northerns, 4 of which were over 34 inches, and the largest reaching 38 inches. They used mepps and syclops as bait and found them on shorelines in 6 feet of water. The best northern fishing was in the evenings in and around 7:00pm-9:00pm.

“Flip the jig, set the hook, reel em’ in, repeat” was the slogan of the week for this crew. The walleye bit best at night off of the reeds in 3-5 feet of water, using a jig and minnow. They caught 500 walleye total, and on average, this group brought in 50-60 walleye the last hour of daylight every night. The largest walleye came to 24 inches. The northerns were also plentiful, catching 250 of them with the largest reaching 34 inches. They were caught on 7 inch rapala’s everywhere on the lake. They were caught in 3-10 feet of water and best in the morning.

A whopping 750 walleyes were caught by this group, this week with the largest reaching to 20 inches. They used spoons and jigs and found them in around 6 feet of water by trolling the shorelines. They said evenings were best for walleye fishing. They also caught about 70 northern on their trip with the largest reaching 33 inches long. They used spoons as lures and casted in weedbeds in about 6 feet of water to find northerns.

A total of 972 fish were caught this week on Upper Wapesi by this group. They caught 853 walleye, 117 northern and perch and 1 rock bass. The largest walleye came to 23 and a quarter inches long, weighing 4.16 lbs. The best time of day for walleye was early mornings and afternoons using jigs and minnows, trolling in 8-10 feet of water on shorelines and reefs. The largest northern they caught came to 40 inches and they used spoons and rat-l-traps as lures. They found them in water anywhere from surface to 5 feet, on shorelines and weedbeds, usually during the evenings.

These are amongst some of the biggest numbers we’ve seen in a while. This crew were mainly fishing for walleye but also happened to catch some northerns. They caught 2512 walleye on their trip with the biggest reaching 26 and a quarter inches long. They used Jigs and minnows in 8-12 feet of water. They caught them all day with some periods of heavy action. They mainly trolled around reefs and in moving water. The caught the 30 northenrs in the same conditions with the same lures with the largest reaching to 34 inches long. They noted that they had steady action and were surprised by the multiple times northern attacked walleye on the retrieve. 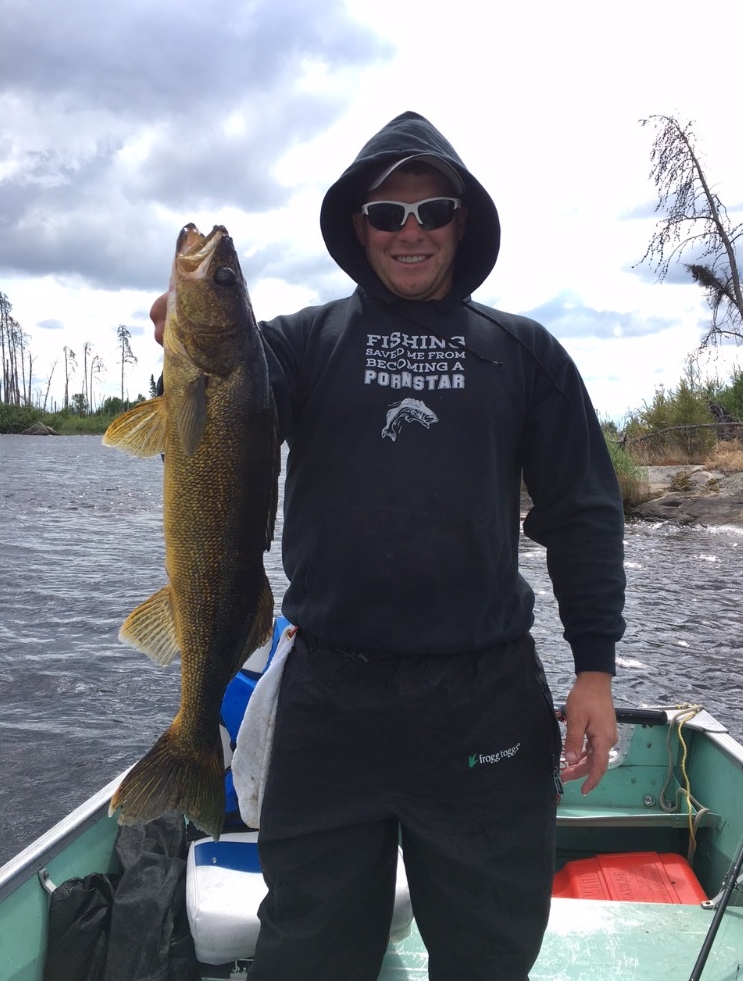 This crew got great numbers this week of both walleye and northern during their stay. The biggest walleye came to 24 inches and was caught using white tail jigs, yellow perch scatter raps trolled with minnows. They were caught in the morning in 6-12 feet of water on shorelines, reefs and weedbeds. The biggest northern northern caught came to 26 inches. They were caught along shorelines and weedbeds using 5 of diamonds spoons, walleye and scatter raps in anywhere from 6-12 feet of water. Northern bit better in the afternoon. Trolling and jigging worked well for this group, bringing in lots of northern near the waterfall and most walleye in the waterfall pool. Best fishing was at the south end of the lake past the other cabin. Lots of fish off of the points in 10-14 feet of water.

The Croft group had excellent luck fishing Una and Curie lake during their stay in July. Between 8 and 10 PM the father and son found that they could catch 2-3 fish per minute in certain spots on Una. They pulled in over 1000 walleye during the week, with the largest fish measuring 26” and more than 100 Northern, the largest at 40”. Most fish were caught in relatively shallow water (6-8’ deep) and on an assortment of jigs & minnows, crankbaits and chatterbaits. In addition to Walleye and Northern, the Crofts discovered that Curie lake was also excellent for catching Smallmouth Bass. The pair found that they had their best luck bringing in Bass while trolling crankbaits.

This group caught a good mix of northen and walleye. They brought in about 40-50 walleye everyday with the largest reaching 21 inches long. They used jig heads and minnows and found them on all areas pointed out on the map and at the dock. They were biting better in the early mornings and late afternoons. Northern were caught when fishing for walleye, but didn’t bite when fishing for northern. They brought in 3-5 northern a day with the largest reaching 22 inches. They were in anywhere from 5-15 feet of water.

This group had great fishing on Grace Lake with approximately 1,100 walleye caught. The fishing was good all day long. They fished with jigs and minnows and some Cabaela's "crap" ... the fish were hitting anything. The biggest walleye was 26 inches! They didn't really fish for northern, but caught about 50 of them. The biggest was 35 inches. They fished in 7-15 feet of water depending on the time of day. Rock piles and points were best. They said they really appreciated our fine hospitality and first class operation! 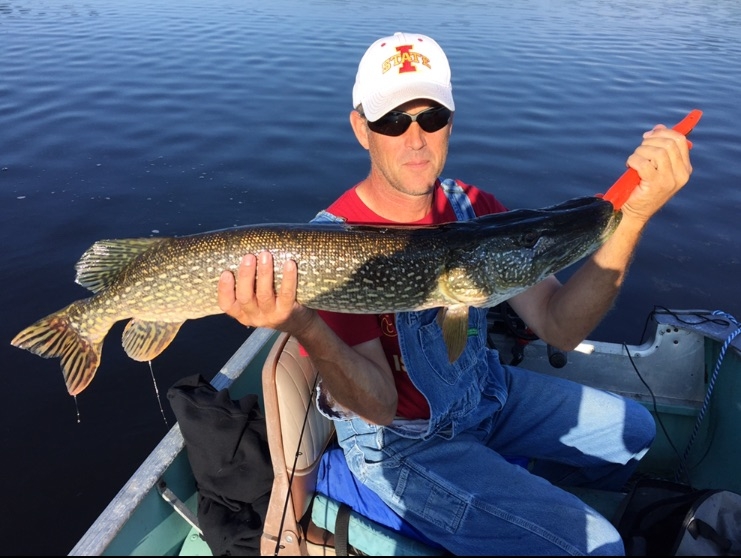 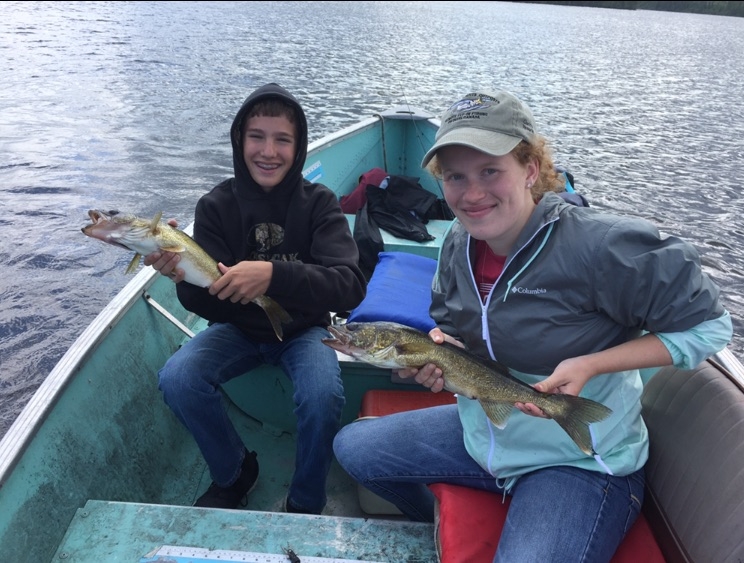 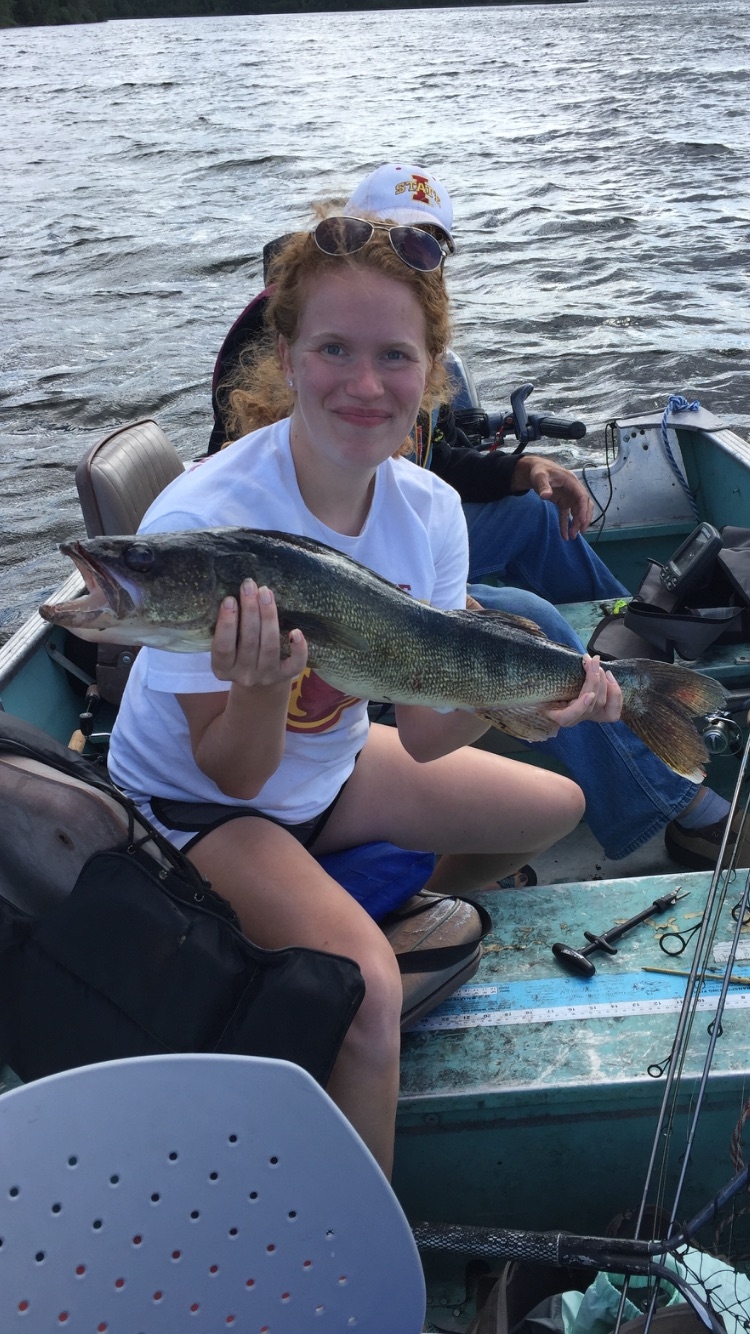