What a fantastic week on Cedar! Tons of Walleye were caught this week. The first few days our guests had a hard time catching any that were under 20-inches! They had at least 30 20+ inches in one day, including a 29-incher. Our Muskie fishermen raised a lot of big fish, but only boated 5 big ones (Muskie). They caught two big Northern as well. There was even a 47-inch Muskie caught off the dock! Talk about an exciting week!

This week started a little slow on the Chain, but it picked up to where it should be at this time of year. The Walleye have finally moved onto the reefs. The Musky were a little sluggish this week, maybe due to the colder temperatures. The excitement was in the Trout fishing. It is really coming alive, especially on Augite (a portage lake off of the Chain). It always makes for a fun day to go up there and catch some big Lakers. Some nice ones were caught on Boulder this week as well.

We had just two people at Kapikik this week. They caught hundreds of fish. For Walleye, the best bait was jigs with minnows and for Northern they used spinner baits. For Walleye they fished in 9-12 feet of water in rocky areas and areas where there was current. Their biggest Walleye was 22 inches. They found Northern in 5-8 feet of water in the weedbeds and the biggest was 36 inches. The weather was up and down all week. They had 3 days of high winds and storms, but still managed to fish a little in between waiting out the weather on the shore. They had a very relaxing week and thoroughly enjoyed the cabin, fish-cleaning house, & amenities. Oh, and they enjoyed “Bob the Caribou”. He was around to visit quite a lot over the week.

We had another couple stay at McVicar Lake. They had awesome fishing – averaging about 20 fish an hour, so about 720 for the week. They fished with minnows in 5-6 feet of water and the biggest Walleye was almost 26-inches! The biggest Northern caught was 35 inches.

It must have been couple’s week because we had another couple at Antenna Lake. They had excellent fishing and their best luck was with minnows & lead head jigs and also a floating florescent orange jig. The biggest Walleye caught was 22-inches. They found Walleye in about 8-12 feet of water. For Northern they used silver minnows and the biggest they caught was 42-inches. They also caught a couple of 3-inchers. The Northern were in real shallow water.

Our group at Bertrand caught lots of Walleye. Their biggest one was 23.5 inches and it was caught right off the dock! They caught a 50+ inch Northern, but weren’t able to get it in the boat. It came up along side the boat and they were able to get a rough measurement. Apparently we need bigger nets at Bertrand! They boated a 43.5-inch Northern and two 37-inchers, two 36-inchers, and lots under 30. The best lures for Northern  were Meps spinners and 7” Rapalas. They also noted that they caught two Blue Walleye; apparently very rare. They also saw two caribou swimming! Sounds like it was a pretty great week.

For the first two days they had hot and sunny weather and then some bad storms overnight lead to chilly mornings, rain off and on, and wind for the rest of the week. The group caught well over 1,000 Walleye. The lost count on the first day, except for the youngest (8 years old) who caught nearly 200 Walleye. The fish scattered a little after the storms came through. They checked a lot of structure on the lake and at times they all had the best fishing they’ve ever had in their lives (going back 40+ years). They caught a few 21 and 22 inch Walleyes everyday and the biggest Walleye was 23 inches. They didn’t fish much for Pike, but the largest caught while jigging for Walleye was 38 inches. The boys (4 young ones) had great fishing off of the dock including several nice Walleye and a 10 lb Pike. They enjoyed watching a family of bald eagles near the cabin that would gather in the evenings – as many as eight. They were very impressed with the cabin, generator, water, ice, and minnows. They said they really enjoyed Wayne’s camp checks and looked forward to chatting with him when he flew in. They had an excellent trip and hope to be back in the future. 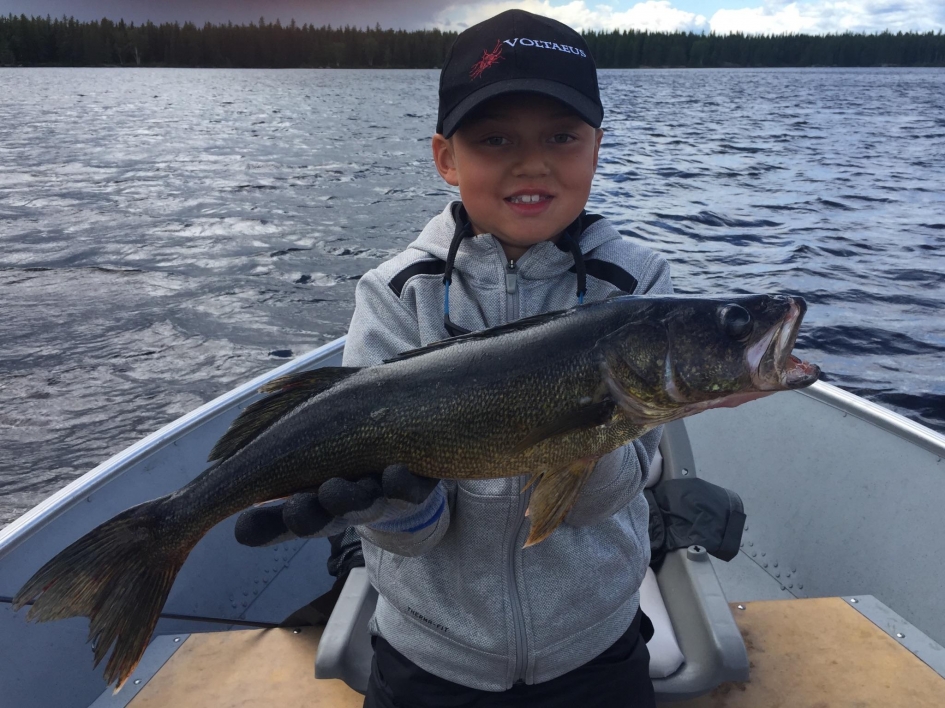 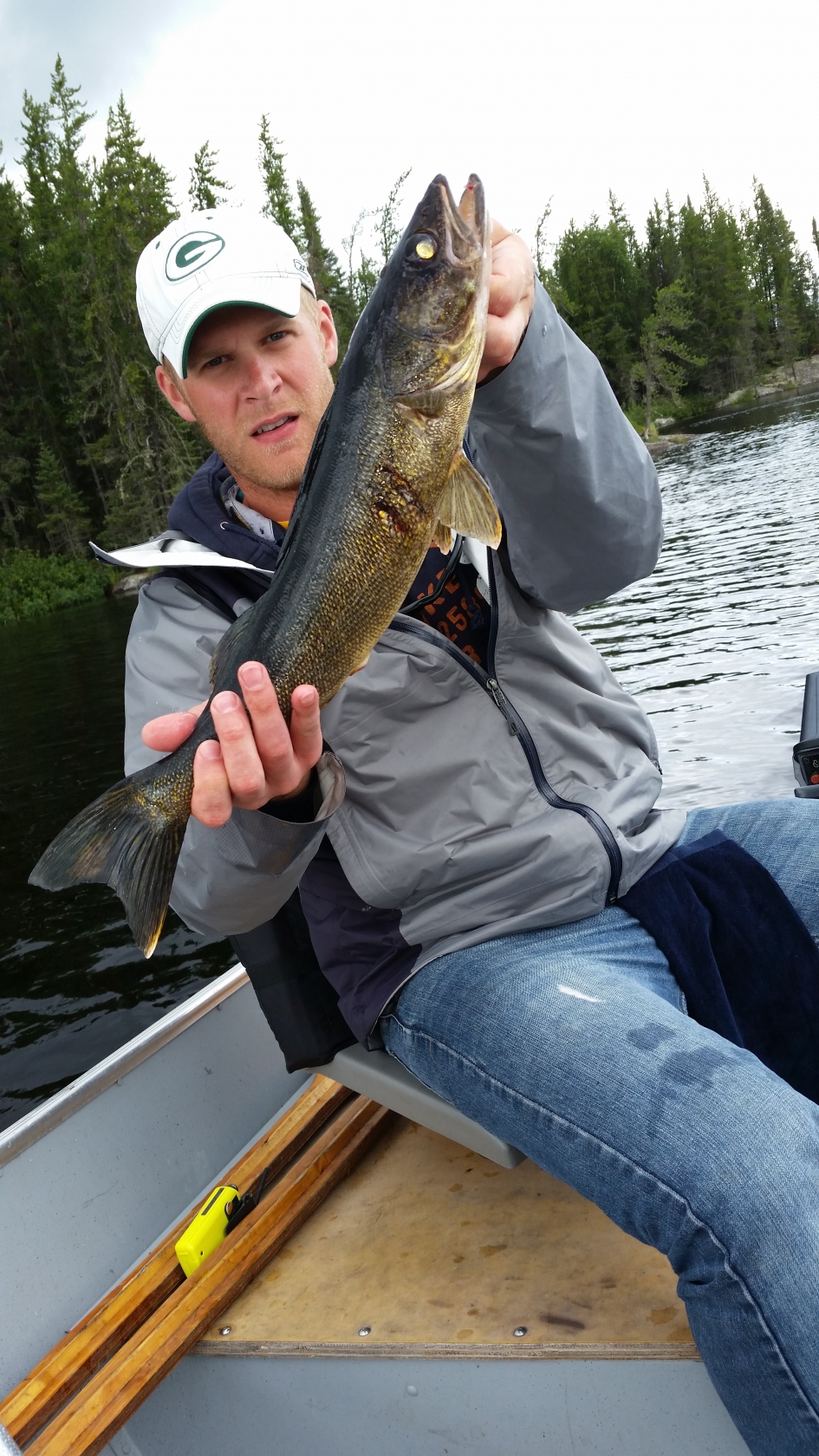 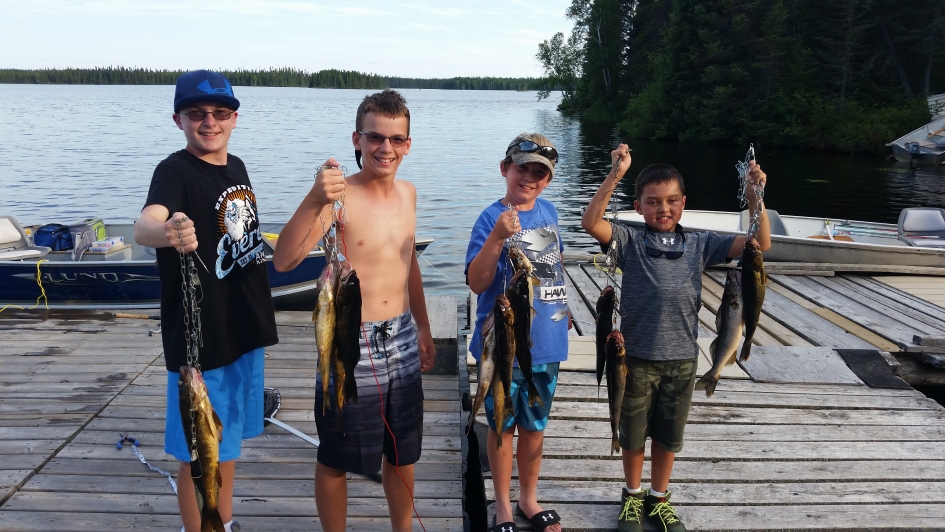