Fun week for our group of 5, 3 Canada vets and 2 first timer's to Canada. First timer's were my daughter and grandson age 12. Having not been to the chain in the last 12+/- years, we started fishing my memories and old waypoints. Over 90% of my spots still had fish on them! Walleye Fishing was very good for the first and last 2 hours of the day, using 1/4 to 3/8 ounce jig spinners with 3 to 5" twister tail grubs and paddle tails. White, black, and chartreuse tails were best, jig and minnow also got a few, mostly smaller ones.

During the day both boats in our group mostly trolled crankbaits, catching Walleye, Pike, and Musky. Trolling produced 4 of the 5 Musky, with Flickr shads #7 the best for all species, mouse, silver/black, and purple couger were the best colors. The fish mostly ignored live bait, even when jigging directly over them, or using Lindy rigs during mid day. Trolling just worked better to get the more active biters.

Weather was very nice with only one day of cool, wet rain. The beach and water toys got used every day by the young ones, and the palapas daily for happy hour by the adults. 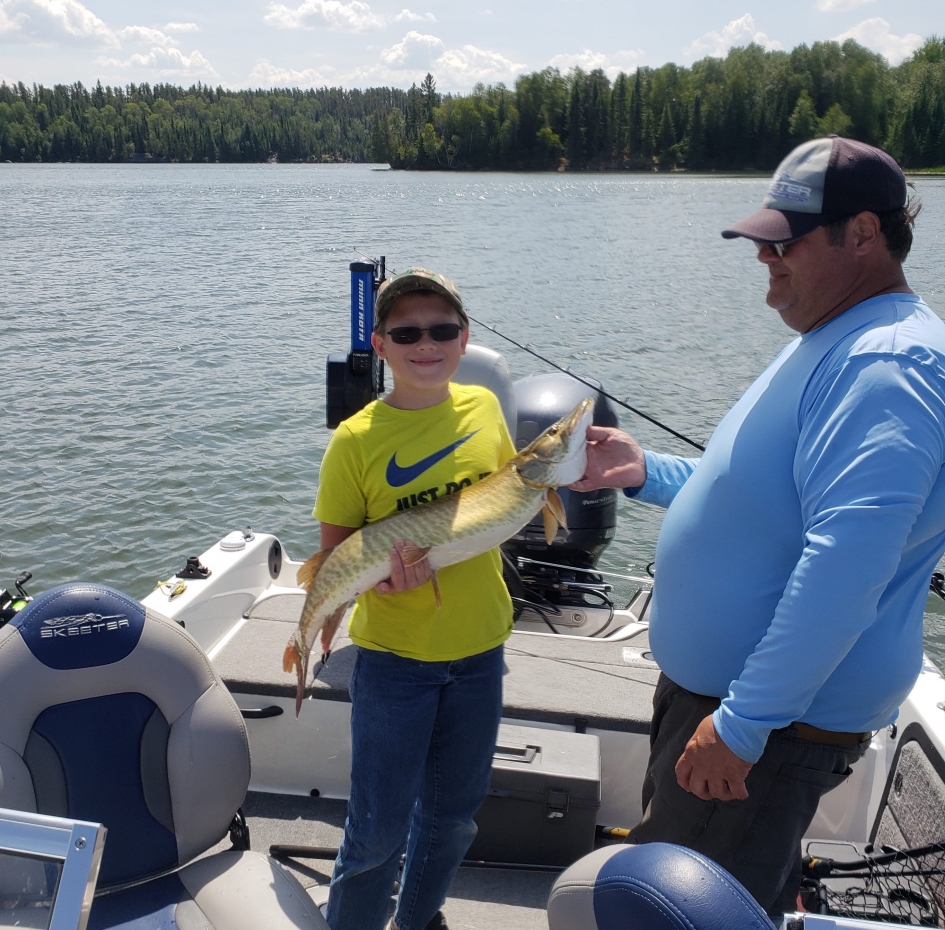 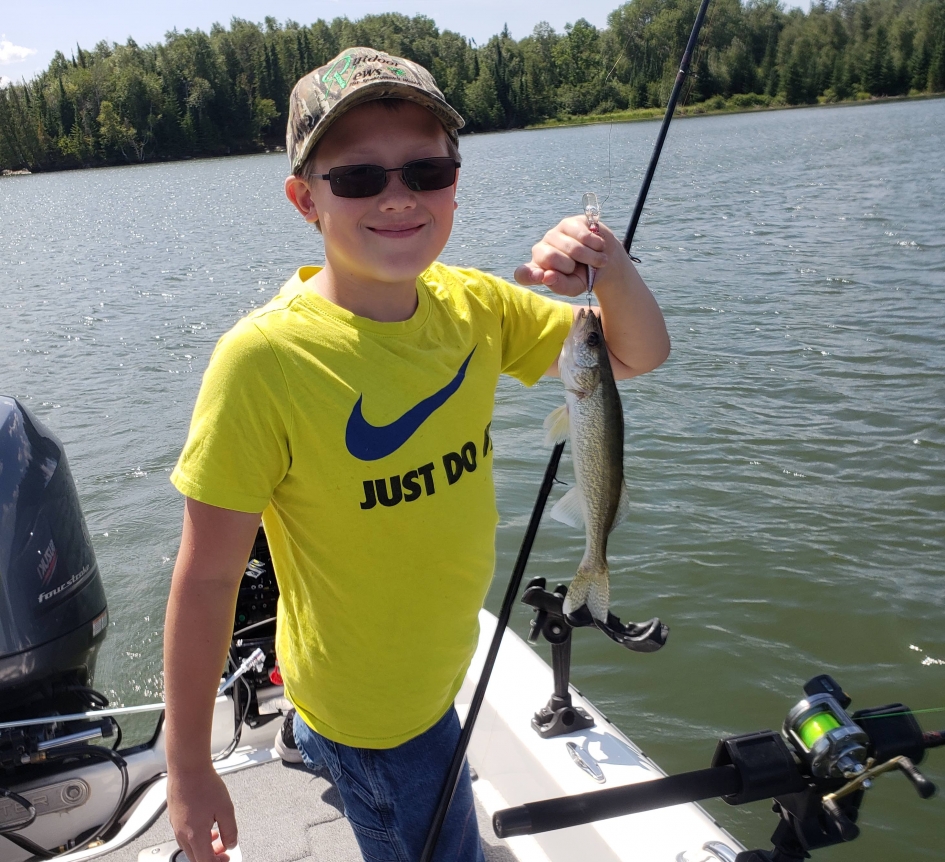 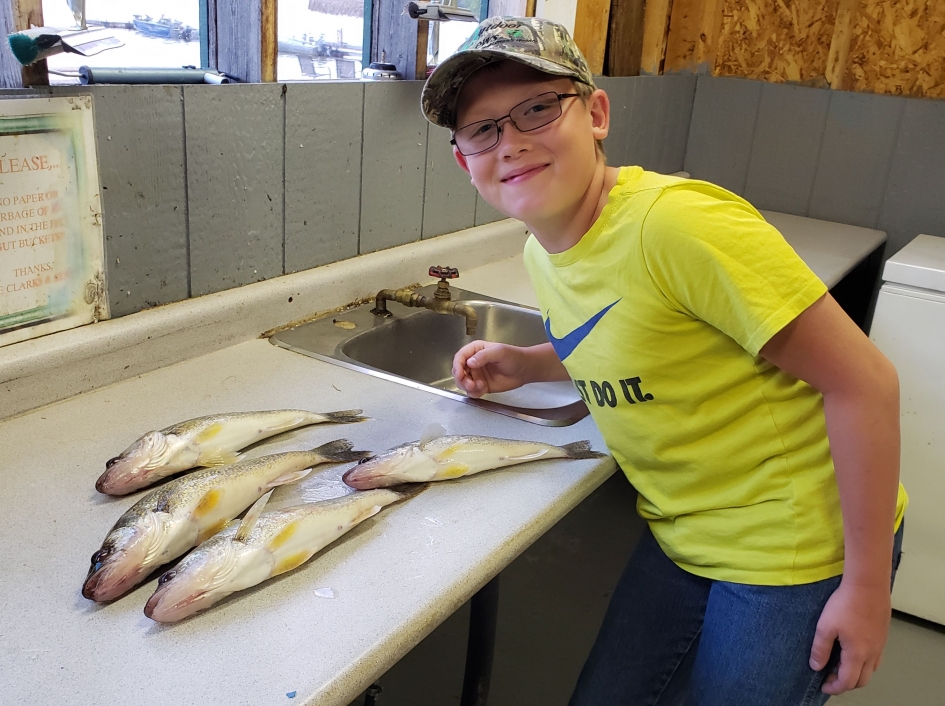 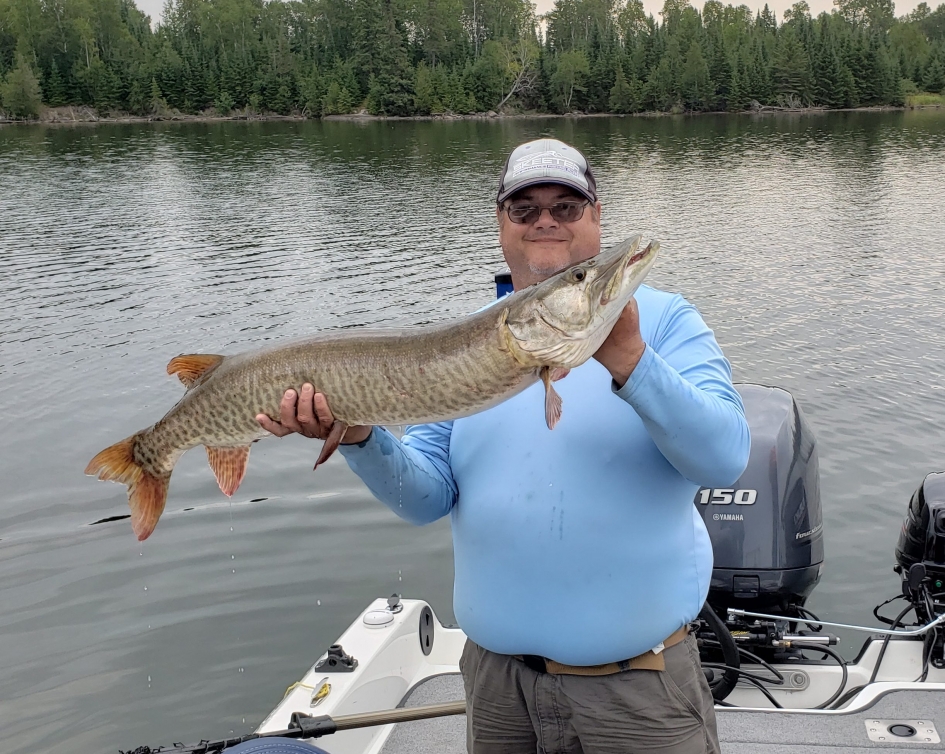 Sounds like hundreds of fish were caught and lots of fun was had. This group loved the lake, cabin, and equipment at Dobie and even made use of the beautiful yard with a broomstick wiffle ball tournament. They said the fishing was good any time of day, they had great weather, and shorelunches every day. Lots of Walleye over 19 inches were caught and released including a 22-incher. They ALMOST landed a 36-inch Northern (the one that got away). For Walleye and Northern both, they had the best luck with jigs and minnows and deep diving Rapalas. The fish were all in 10-30 feet of water on the points and the deeper water on the North part of the lake.

For some this was a first-time outpost trip and they caught more fish in a week than they did in their entire lifetime! The biggest Walleye for the group was 21 inches and the biggest Northern was 36 inches. The best bait for Walleye were jigs and minnows and fishing was best along shorelines, points, and islands in 5-16 feet of water. The best lure for Northern was a vibrex blue fox (silver) #4. The Northern were found trolling shorelines, points, and islands.

This group of first-timers to Bertrand said it was a fun lake to fish. They caught 1,341 Walleye and 51 Northern. The biggest Walleye was 22 inches and the biggest Northern was just shy of 30 inches. Northern were mainly caught while Walleye fishing using jigs and minnows. They found the fish on reefs and humps anywhere from 6-30 feet deep.

Even with a few slower days of fishing and shorter days due to weather, this group still pulled in about 1,000 Walleye. The biggest Walleye was 26 inches. They had the best luck with jigs and minnows. Walleye were on the reefs and around the points in 8-12 feet of water.

This couple had a great stay on Pusher lake and caught lots of fish. The average Walleyes were 17-20 inches in size and the biggest was 21-inches. They used jigs and minnows and also Daredevil lures for Walleye fishing. The Walleye were on reefs and also caught while trolling the South and North shores. The biggest Northern they caught was 40 inches! For Northern they trolled the entire lake with Daredevil lures and the green and orange coloured ones worked best.

Despite some rough water and cold weather due to fronts that came through, they caught fish every day. They thought Otatakan was a beautiful lake. Their biggest Walleye was 24 inches long. They fished with jigs and minnows or leeches around rocky points and reefs in 15-20 feet of water. Northern were mainly caught while Walleye fishing.

This couple had a fantastic week at Snelgrove Lake. Aside from amazing fishing, they enjoyed the wildlife (caribous and bears), they loved sitting with a cup of coffee and enjoying the peacefulness of the lake, they picked blueberries, and enjoyed the cabin and scenery very much. They noted how the Blue Walleyes fought hard and were beautiful to see. They caught three 24 inch (plus) Walleyes and a 33-inch Northern. They used jigs and minnows and also spinners for Walleye and spoons for Northern. The shorelines, reefs, and weedbeds were where the fish were at!

This family had a good week at Meen and said the dock fishing was great! Their biggest Walleye was 19 inches. They used live minnows, road runners, and spoons and found the Walleye in the deeper parts of the lake. They caught Northern on rattle traps, rapalas, and jigs with grub tails. The Northern were along shady banks and by the dock. They said the fishing in the coves on the far East side of the lake was exceptional. You can drag your boats over the sand bar and catch fish for hours! I don’t think we knew about these coves! They also saw a wolf pup on the South end of the lake… neat!

These two had a great time on Cook Lake and really found a couple of “hot spots” where they could catch 100 Walleye in an evening. They did well with jigs and minnows and also caught several on small spoons. Their biggest Walleye in Cook was 17 inches and the biggest Walleye in Bumpy was 21 inches. The Walleye were mainly along shorelines and off of points in 5-10 feet of water. They also caught lots of Northern including a 36 incher on Bumpy and a 38 incher on Cook. The best lures for Northern were 5 of Diamonds and yellow and pink Cyclops. The smaller Northern were in the reeds and the bigger ones were off rock points.

They found they had to work a little for the Walleye, but they said they had a great time and will be back. They caught 3 Pike over 40 inches, which is awesome and their biggest Walleye was 23 inches. They used crank baits and tinsel tailed jigs for Walleye and for Northern they used spinner baits, crank baits, and rattle traps. Deep shorelines and reefs were best. 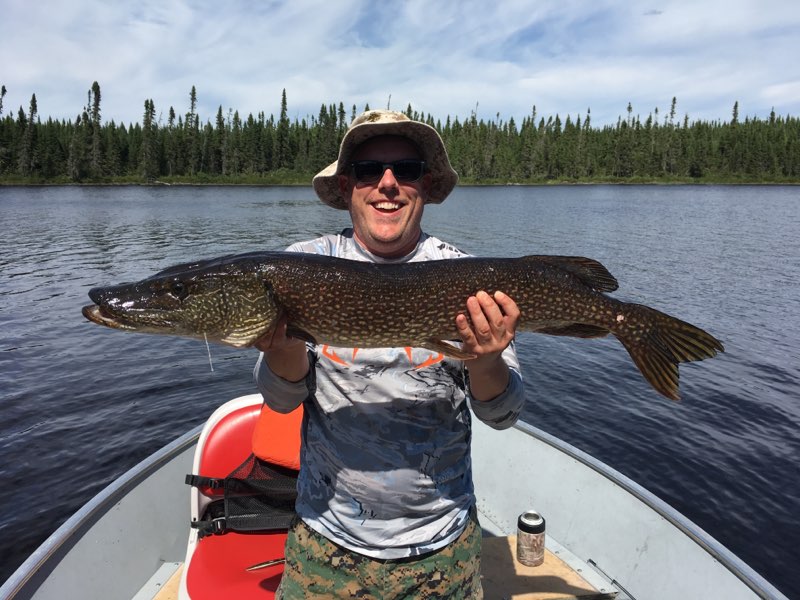 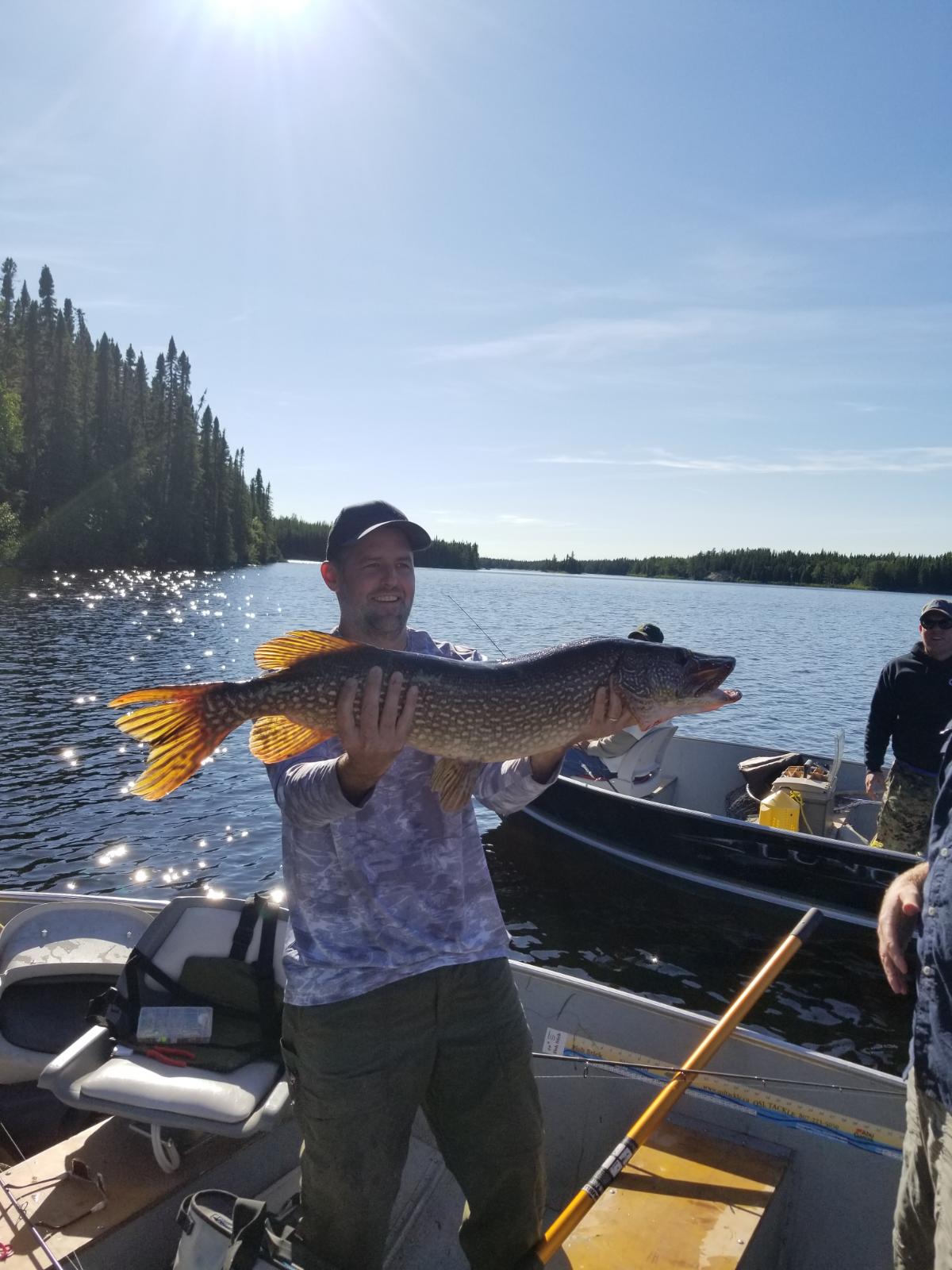 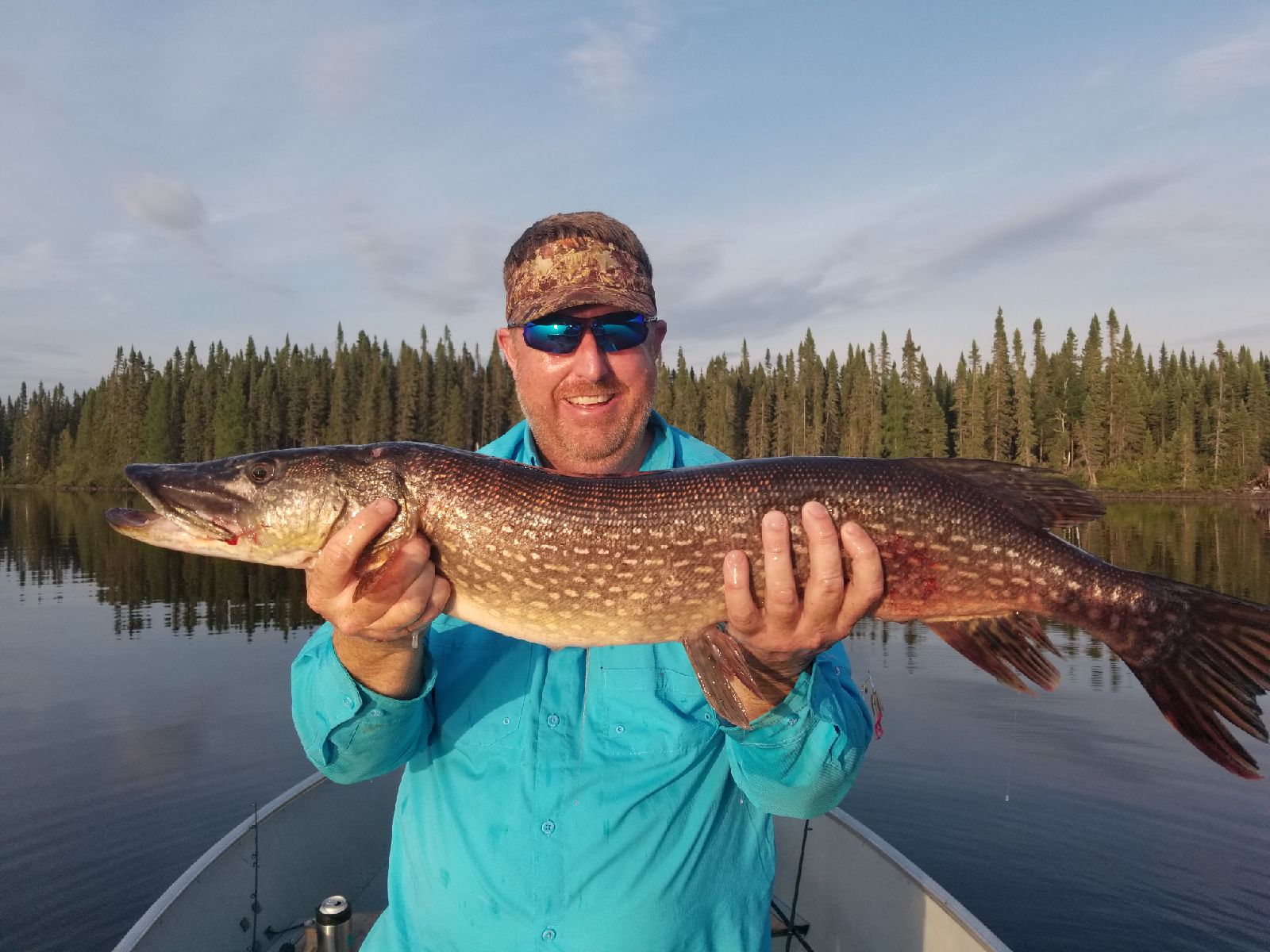 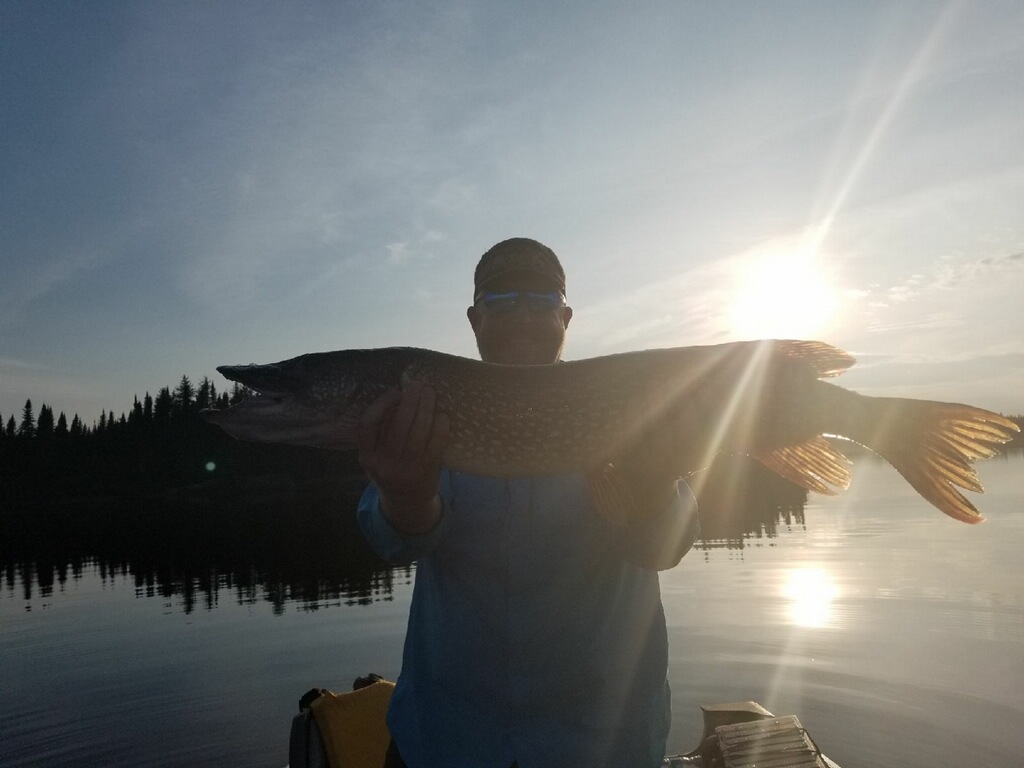 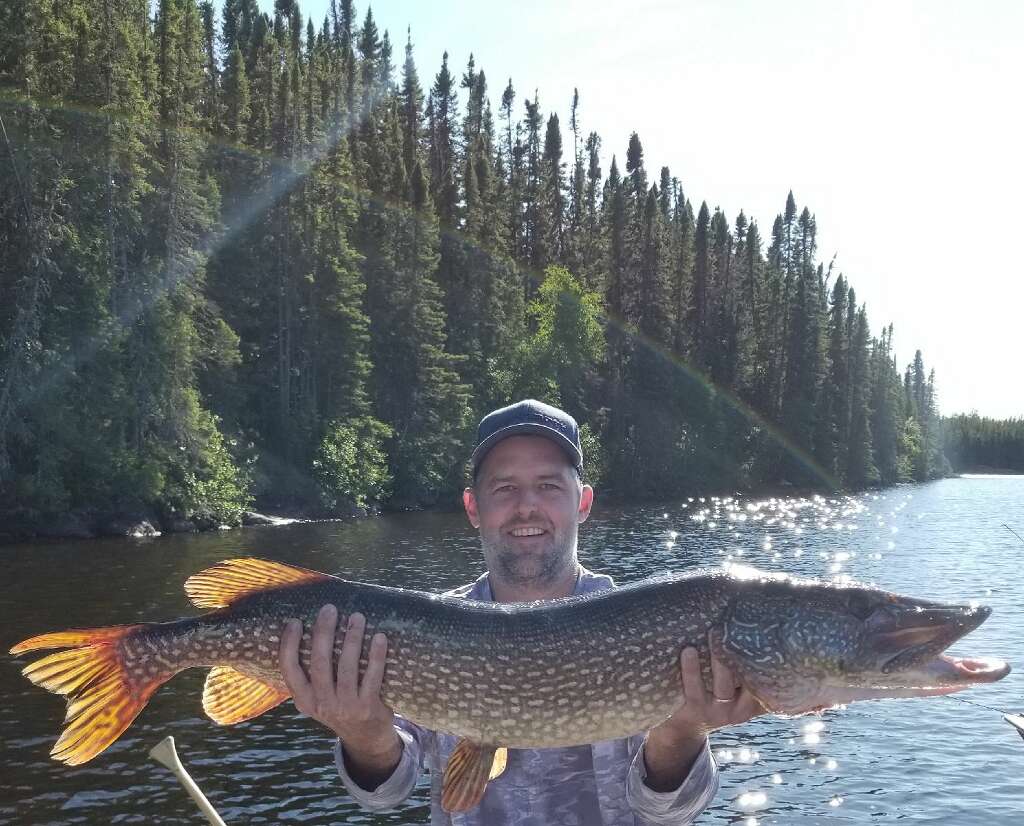