Wright Lake got hit especially hard with high winds this week including a storm that took out LOTS of trees. Needless to say, it made the fishing a little tough. They mainly targeted Northern and the biggest caught was 37.5 inches. The best lure for Northern was a Gold Doctor Spoon. They were in weedbeds about 30-40 feet from the shore in about 5-8 feet of water. They only caught enough Walleye to eat and the biggest was 22 inches. For Walleye they used jigs and minnows and fished the reefs and weedbeds. Walleye were in 7-8 feet of water.

This group caught as many Walleye as they could have ever wanted using jigs and minnows. The biggest one was 21 inches. The Walleye were along the shorelines in 10-15 feet of water. Northern were caught while Walleye fishing and the biggest was 29 inches.

These two found all the big fish in Antenna Lake this week! Although the Pike fishing started out slow, it picked up towards the end of the week and they boated a 35.5”, 37”, 40”, and a 43”. Best lures for Pike were Perch imitation baits. The Northern were on rock humps and around points in 10-13 feet of water. They caught as many Walleye as they could have wanted ending the week with over 250 in one day. The biggest Walleyes were 22.25”, 26”, 27”, and 27.5”. The Walleye were caught on jigs and minnows on rock humps and points in 10-13 feet of water as well. Sounded like a great trip! Check out their awesome pictures below. 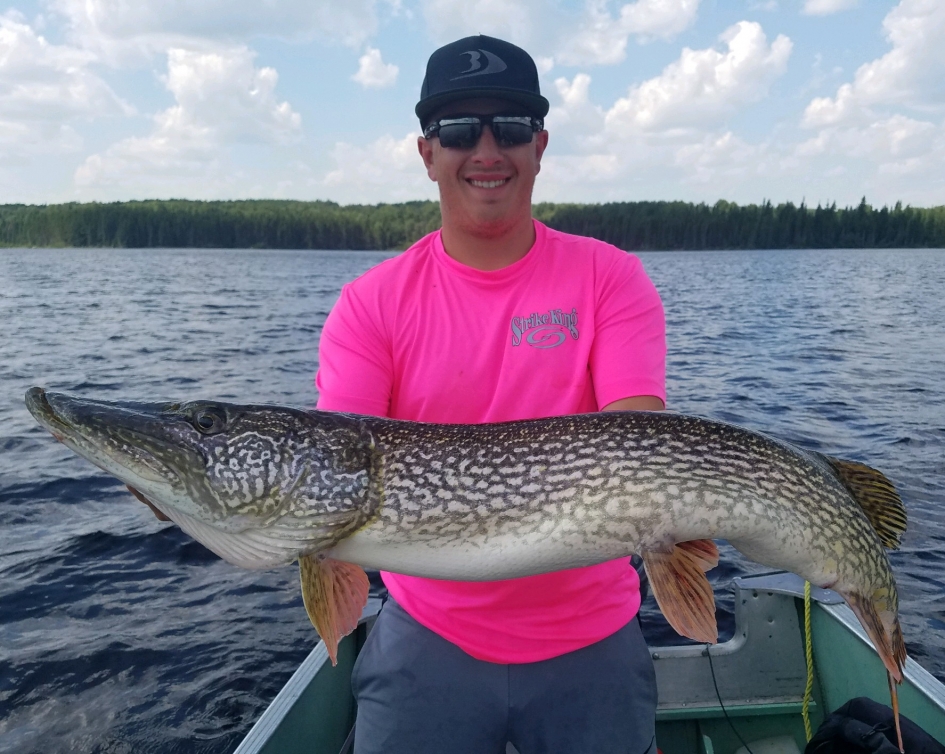 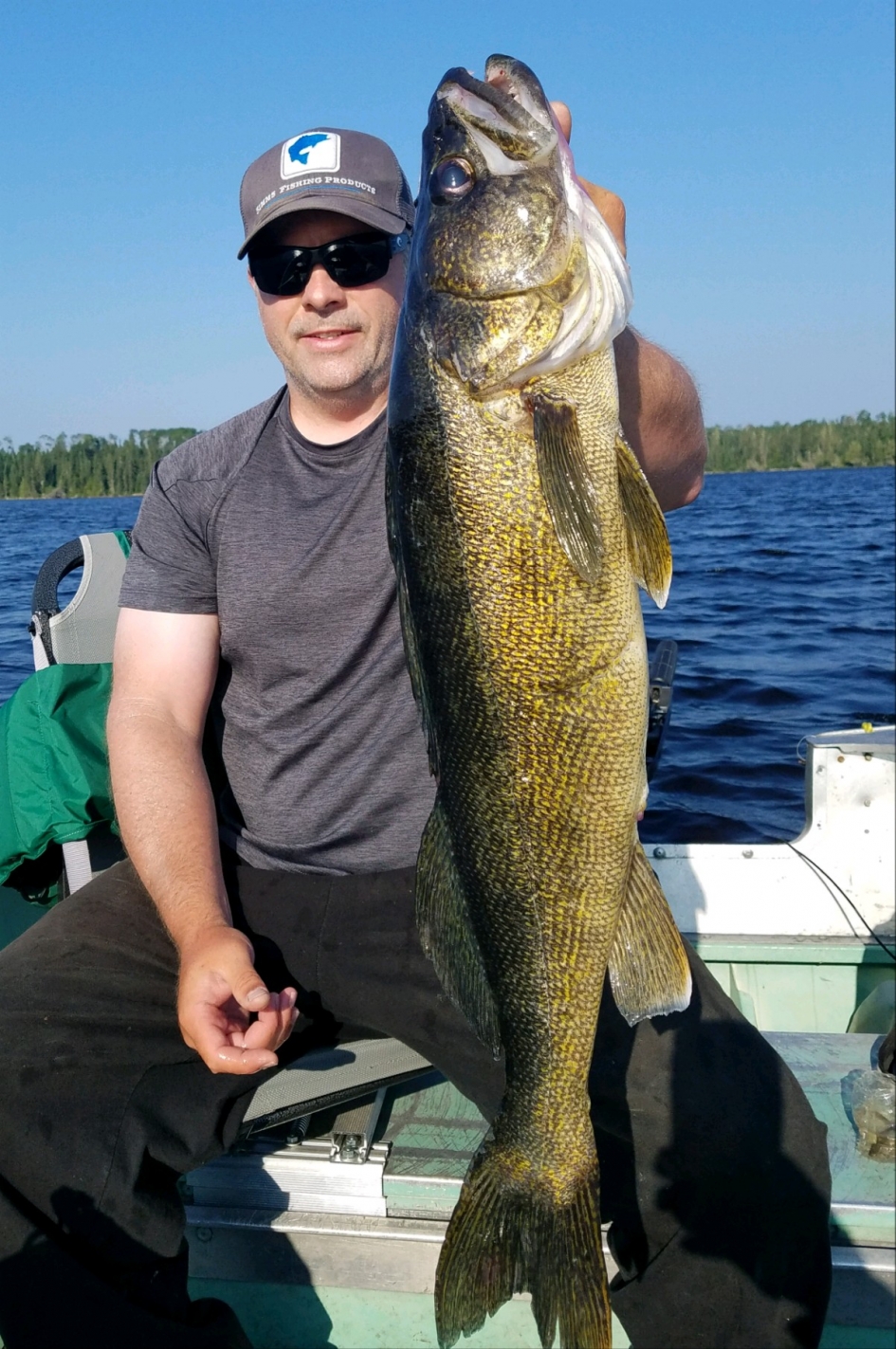 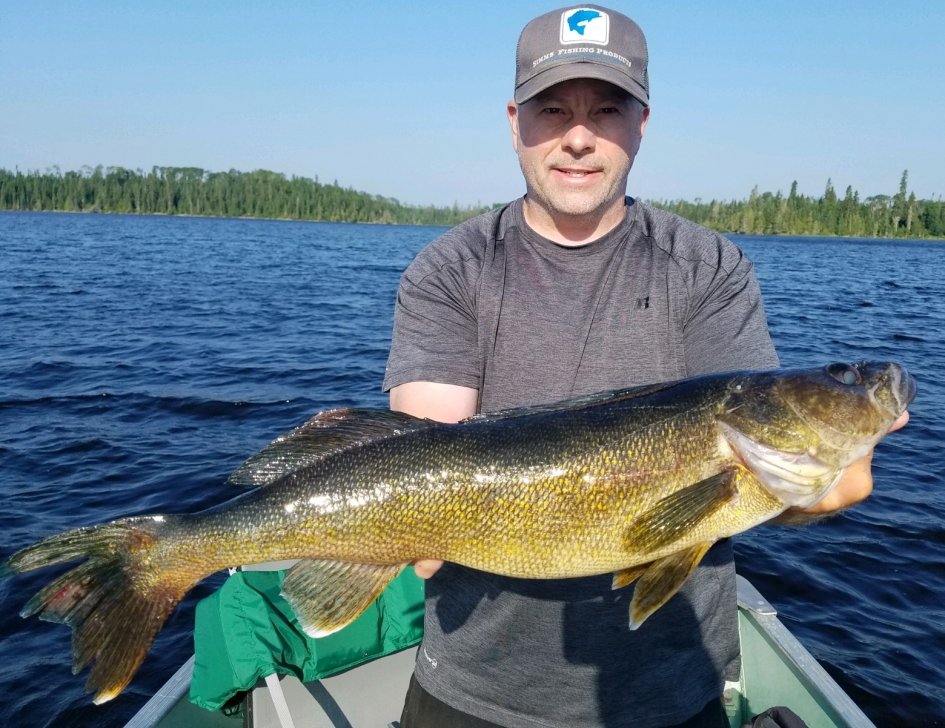 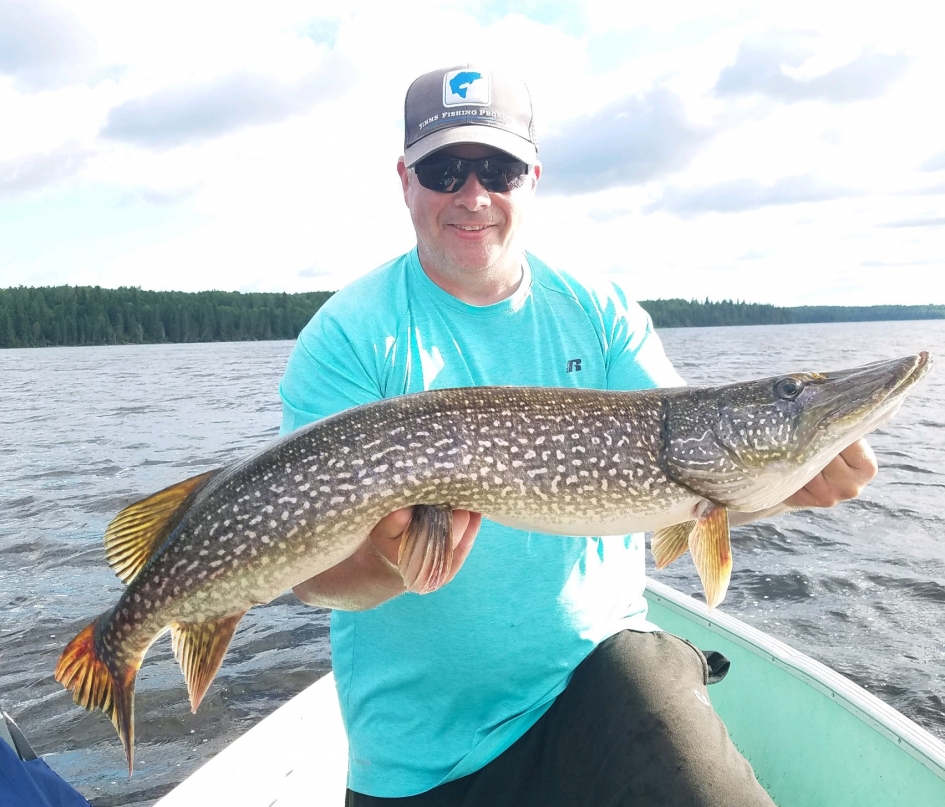 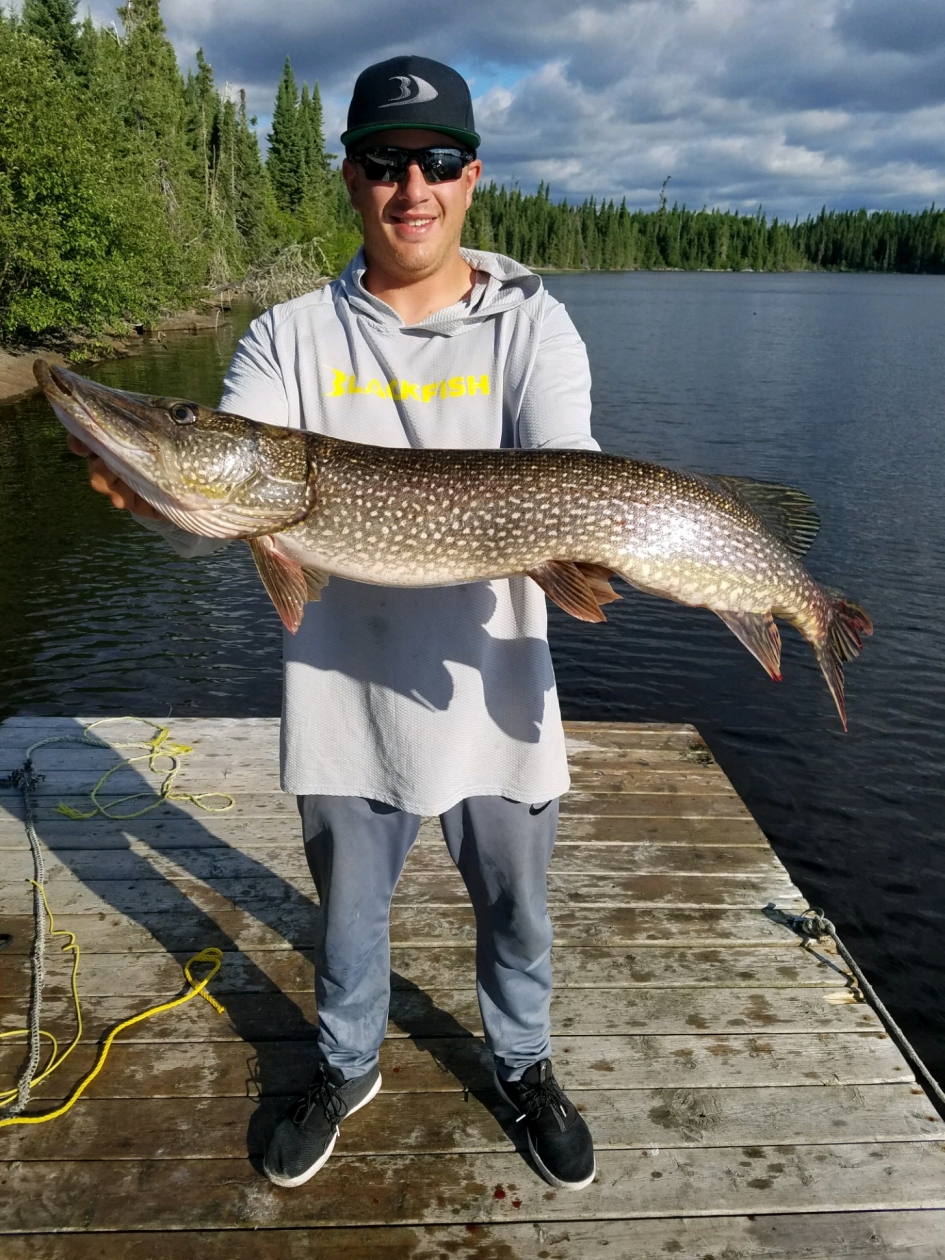 Walleye fishing was good on Bertrand this week with the biggest one being 25 inches! The Walleye were on reefs and points in 10 feet of water. They also caught a fair share of Northern with the biggest being 37 inches. The Northern were in the weeds and on the points.

Looks like this group mainly targeted Walleyes. Their bait of choice was crank baits and jigs with minnows. The Walleye were mainly on rock reefs anywhere from 3-17 feet deep. The biggest Walleye was 23 inches and the biggest Northern was 39 inches.

This group had fun exploring all there is to see on Richardson Lake including abandoned gold mine sites! They also enjoyed fishing off the dock in the evenings for Walleye and Northern. They caught some nice Walleye including a 23 and 24 inch. They also caught a 38 inch Northern. They used crank baits and jigs/minnows for Walleye and deep water crank baits for Northern. They found Walleye along shorelines and on reefs anywhere from 3-20 feet deep. The Northern were along shorelines and in the deeper channels in 15-20 feet of water.

Wind blown shorelines and weed lines seemed to produce the most fish. This group mainly targeted Walleye. With the dark water, the time of day/amount of sunlight didn’t seem to make a difference in the fishing. They found that jigs with minnows and jigs with tails produced equally well. They caught about 50 Walleye per day and the biggest was 21 inches. Orange and yellow jigs with spinner blades worked well as well as royal blue 1/8 oz jigs. They mainly stuck to the shorelines on both Bumpy and Cook Lake.

This group had a great time on Snelgrove and said they never went hungry. They fished all over, including the portage lakes and caught over 350 Walleye and over 400 Northern. They found fish on shorelines, reefs, and weedbeds. Walleye were about 10 feet deep and Northern were 2-5 feet deep. They fished with various lures, spoons, and minnows.

Otatakan Lake Outpost hosted a large crew this week! They thought the cabin was excellent and the boats were in great shape and ran well. The fish were very plentiful, but the average sizes caught were on the small side. The biggest Walleye was 23 inches, with many in the 15-20 inch range. The biggest Northern was 29.5 inches and many in the 20-24 inch range. For Walleye fishing they used minnows and jigs and also rapalas and spinner baits. They fished deeper shorelines and rocky points. The Walleye were just off the bottom in 12-15 feet of water. For Northern they used Rapalas, top water baits, and spinner baits. They trolled the shallows and fished weedbeds and reefs. Northern were in 6-8 feet of water.

1,020 Walleye were caught this week and over 600 Northern! They enjoyed exploring McVicar and the portage lakes. They caught 201 Walleye on Lang Lake between 3 people in just 4 hours. Their biggest Walleye was 26 inches and they caught a pair of 41-inch Northerns! For Walleye the best bait was jigs and minnows. The best spots were the narrow sections of Lang & McVicar and on the rocky points in 20-25 feet of water. The best lures for Northern were spoons and spinner baits and they found them in shallow bays in only 4 feet of water. 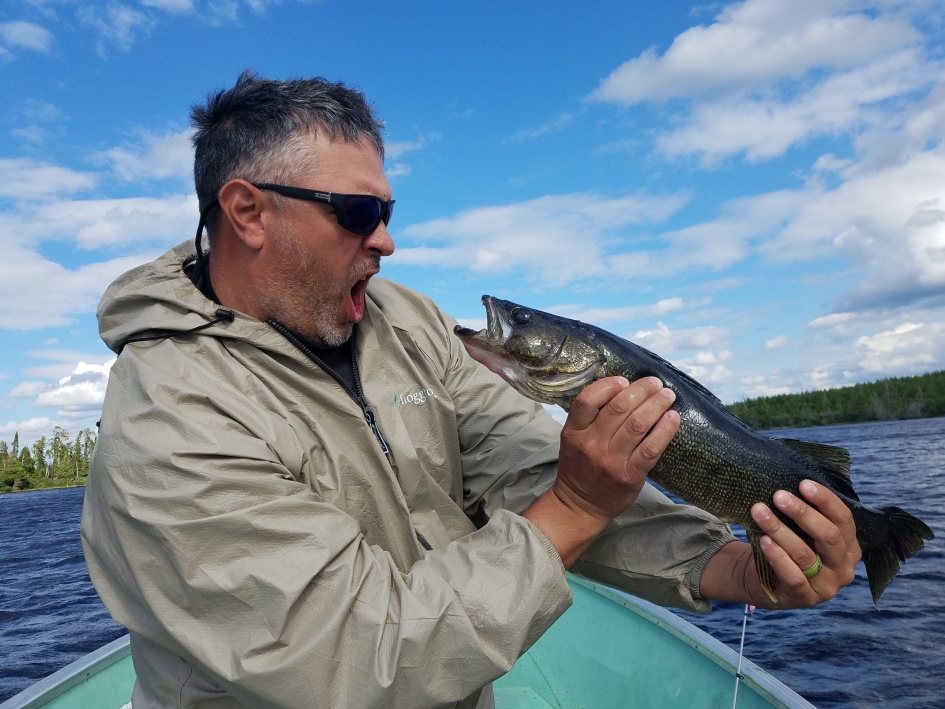 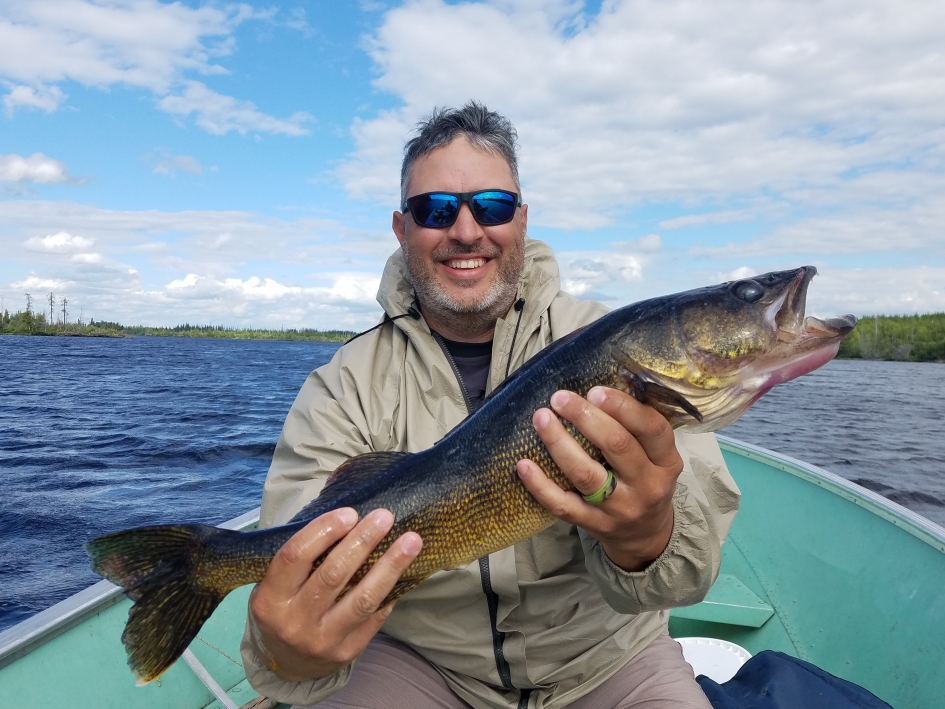 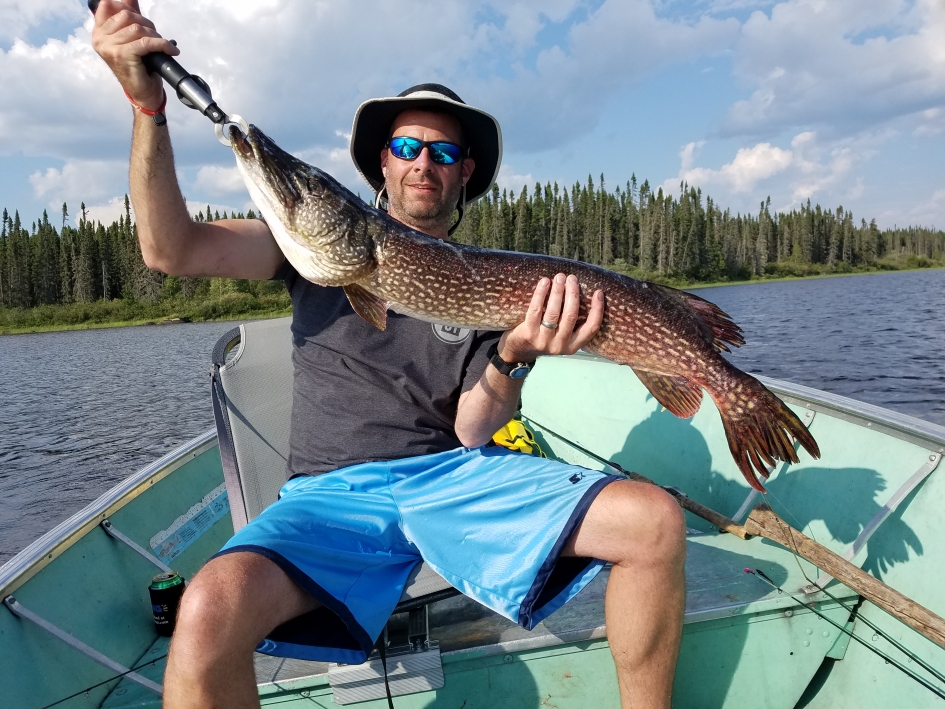