Our guests had to “work” a little for their fish this week…. Fairly typical for July. There were, however, a lot of respectable Walleyes caught and released and the guests were able to enter their name in our 22” and over catch and release contest! The fish cookers were blazing every evening with fresh fish! The Northern Pike were active, especially in the river. The Muskie were also very active… lots caught in the mid 40’s. The Lake Trout were still on the slow side.

This was a great week for both Walleye and Muskie fishermen!! The Walleye fishing was easy and the Muskie fishing was EXCITING! It was easy to catch your limit of Walleye this week and there were some good sizes caught as well. The Muskie were on fire… when they weren’t attacking the Walleye being reeled in, they were attacking boat motors! My Grandfather has a 2HP Yamaha on his boat as an extra motor in case of emergencies. The prop was hovering on the surface of the water and turning slowly in the wind… a HUGE Muskie came up and clamped its teeth on that prop and would NOT let go!! He had to hold his motor to keep it from coming off the boat and the Muskie fought with it for some time before finally letting go. That same Muskie jumped out of the water trying to steal my Grandpa’s last Walleye he wanted to keep for dinner. We also had a guest who saw a 50+ inch Muskie attack a 28” Northern. Not to mention, the Muskie fishermen were raising 20+ per day and boated a few over 40 inches including a 46”. What a great week… the dock fishing was pretty good too! 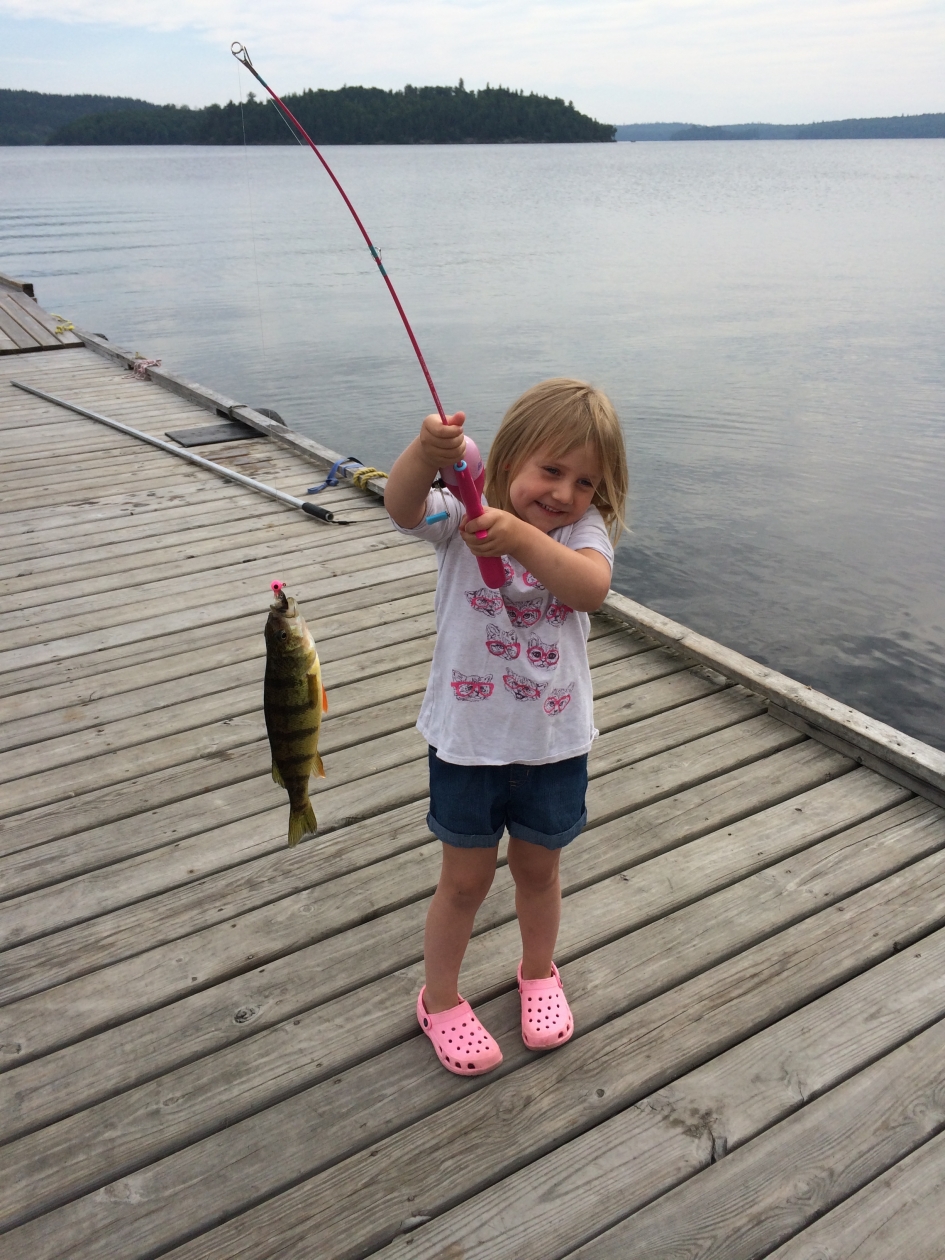 This was their 4th trip to Una Lake and they said they caught more fish in this single trip than the last 3 combined! The fish were also much bigger! They said the Walleye were biting on absolutely anything… jigs with minnows, crawlers, plastics, they threw crank baits… anything!! The biggest Walleye was 24 inches and the biggest Northern was 38 inches. They had great Smallmouth fishing in Currie with the biggest Bass being 18 inches! They said they caught lots of Bass in the 13-15” range. Most Walleyes caught in Una were around 18-inches… it was often hard to find something small enough to eat. The best Walleye fishing was in 6 feet of water around the mouth of the river running in. The bigger Northern were found in Currie. These guys had an awesome trip!

These 4 guys have been to Dobie about 15 times… this year did NOT disappoint! They caught anywhere from 200-400 Walleye per day and the biggest was 24 inches. They said at least 20% of the Walleye were over 20-inches long. The East side of the lake was best as well as the sandy points. They caught their bigger Walleye in the “bunny ears”. They mainly fished with jigs and minnows and did not target Northern.

Walleyes were biting this week at Otakakan. These guys caught 806 fish 90% of them being walleye. The biggest walleye brought in this week was 21 inches and the biggest pike was 27 inches. They used minnows on a gold jig for the most part while trolling the shorelines in about 10-12 feet of water. They found that the best time of day to fish was as long as there was light out.

This was a very successful trip to Pusher lake. Walleye fishing was great with boatloads caught everyday. Orange ¼ ounce jigs, plastic pearl trailer and bottom bouncers with minnows were what worked for this group in 6-12 feet of water around rocks and reefs. Northern weren’t tough to find on this lake either, by using ½ ounce rattle traps, Johnson spoons and walleye jigs also in 6-12 feet of water around rocks and reefs. This group caught a good feed the first night they got there using jigs and plastic trailers. On day two they fished the underwater bar just out from the cabin which was on fire. They caught several 20-22 inch walleyes in a couple of hours. They also found the rocky point between the cabin and the island to be another hot spot. After some pretty steady rain, the next day the fishing was tremendous, catching hundreds of fish, most fish being in 4-9 feet of water. The last couple of days were spent fishing the west bank. They used live bait and said they haven’t drowned that many minnows in the last 15 years. The west bank was hot, hot, hot and they spent the entire day in only two spots. Here they caught a nice 26-inch and 22-inch walleye in and around 4-12 feet of water.

This group of three caught a total of 827 fish with the majority being walleye and the remainder being northern and a few jumbo perch. Biggest walleye was 23 inches and biggest northern was 38 inches. This group caught a 37 inch northern right off of their dock just using a net as it was trying to eat their shore lunch. Wind and rain made for best fishing, and the bite slowed a bit when it got hot/ np wind. They found that jigs and minnows worked well for walleye any time of day all over the lake. Blue fox, mepps and syclops worked for northern any time of day in and around weeds, grass and cabbage and also along the shorelines.

This week on Cook, the fish were biting on 3/8 ounce jigs in 4-5 feet of water. The shoreline was where this group caught the majority of their walleye. Northern were caught right off the dock throughout the day.  This group finished the trip catching 176 walleyes this week with the biggest being 20 ½ inches and 16 northern with the biggest being 30 ½ inches. Remember to bring bug spray to Cook, because the portage to Bumpy lake could get a little buggy.

This group spent a week out at Shabumeni lake and caught over 1400 walleye! Their secret was a simple jig and minnow combination and found that the fish were biting on shorelines, off the points and around the reefs. The best time of day varied but the depth they found them in was anywhere between 12-14 feet. Northern were also biting this week! This group caught 60 plus northern with the biggest sitting at 25 inches. Spoons were the hot pick for northern for these guys usually trolling around the weed beds and shorelines.

This family trip looked like a successful one. They spent 5 days trolling the shorelines for walleye and northern. They caught 260 walleyes with the biggest reaching 25 inches. Jigs and minnows is what worked for them in anywhere between 5-22 feet of water. They brought 9 Northern into the boat using Rappla for bait with the biggest reaching 31 inches. Getting up early and fishing in the morning was the best time to catch northern, trolling the shorelines in 15 feet of water.

Kamungishkamo was hot this week. This group brought in 1,364 walleyes with the biggest fish being 21 ½ inches long. They used 1/8-1/4-ounce jig heads with minnows. They bit best in 4-20 feet of water trolling around reefs and shorelines and the best time of day was the evenings. Northern were also biting during their stay. The caught 132 northern with the biggest reaching to 35 inches. This group used crank baits and spinners in about 3-15 feet of water also trolling the shorelines and reefs. Northern were caught all day long, no matter the time of day or weather conditions. They even caught Walleye while taking a little swim! 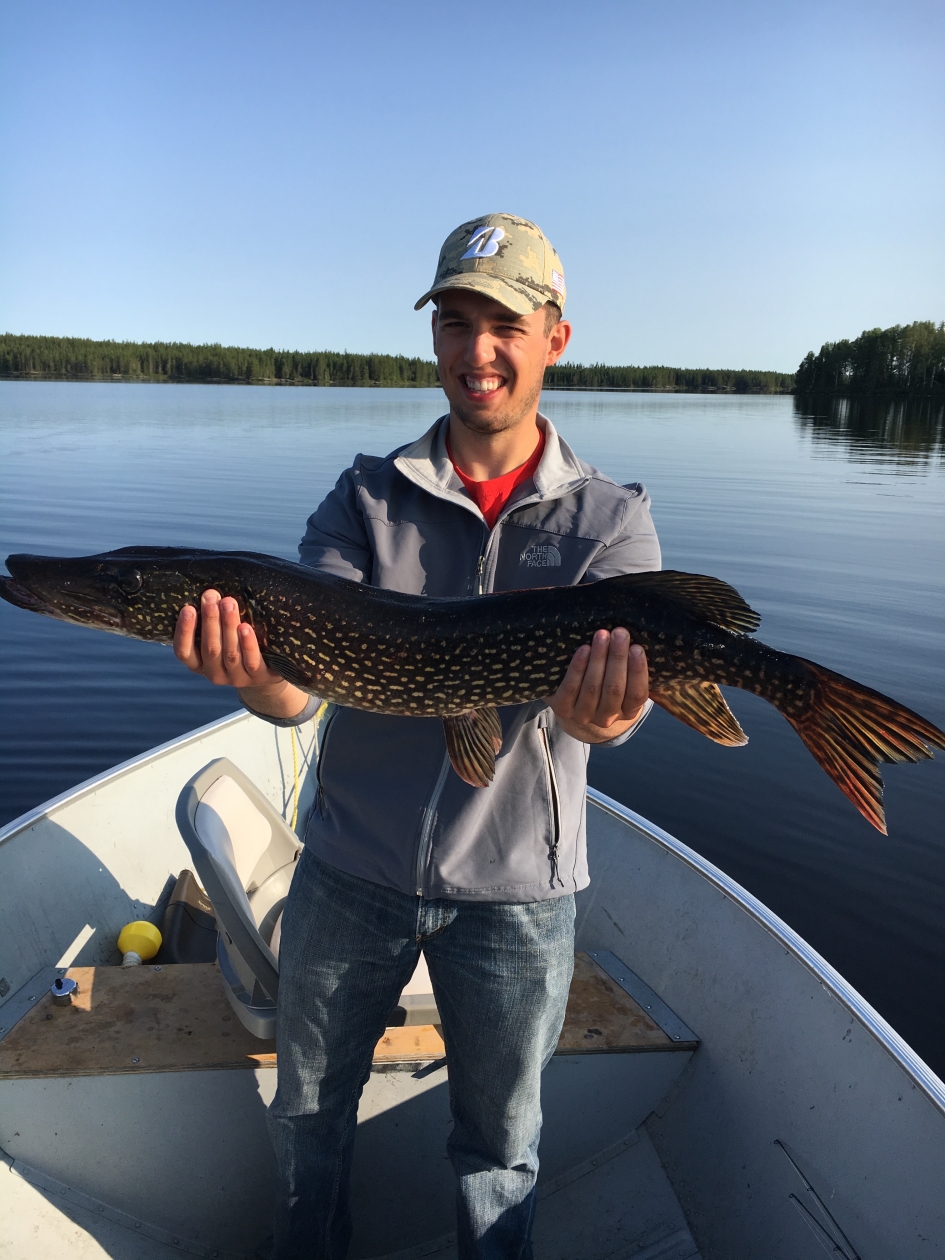 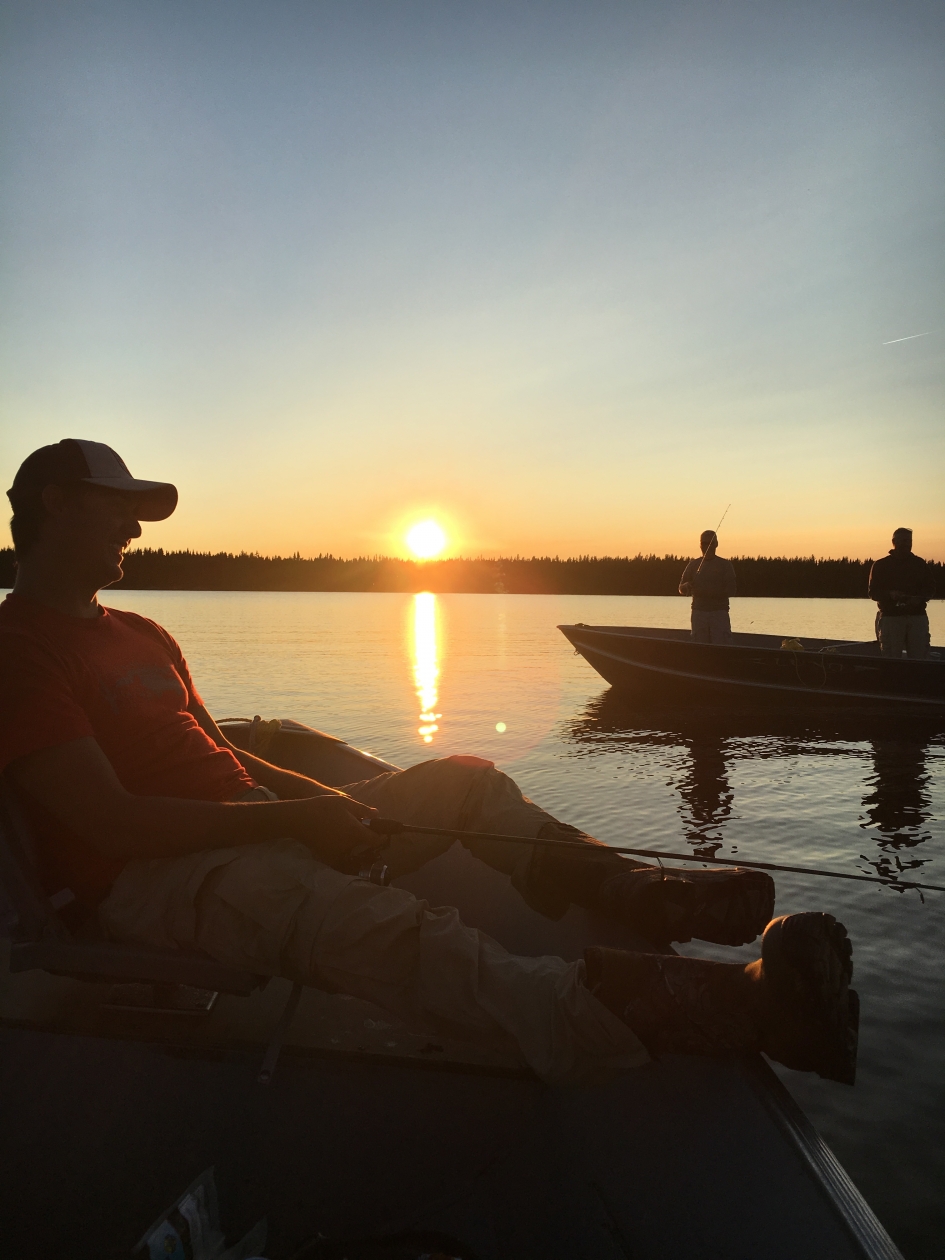 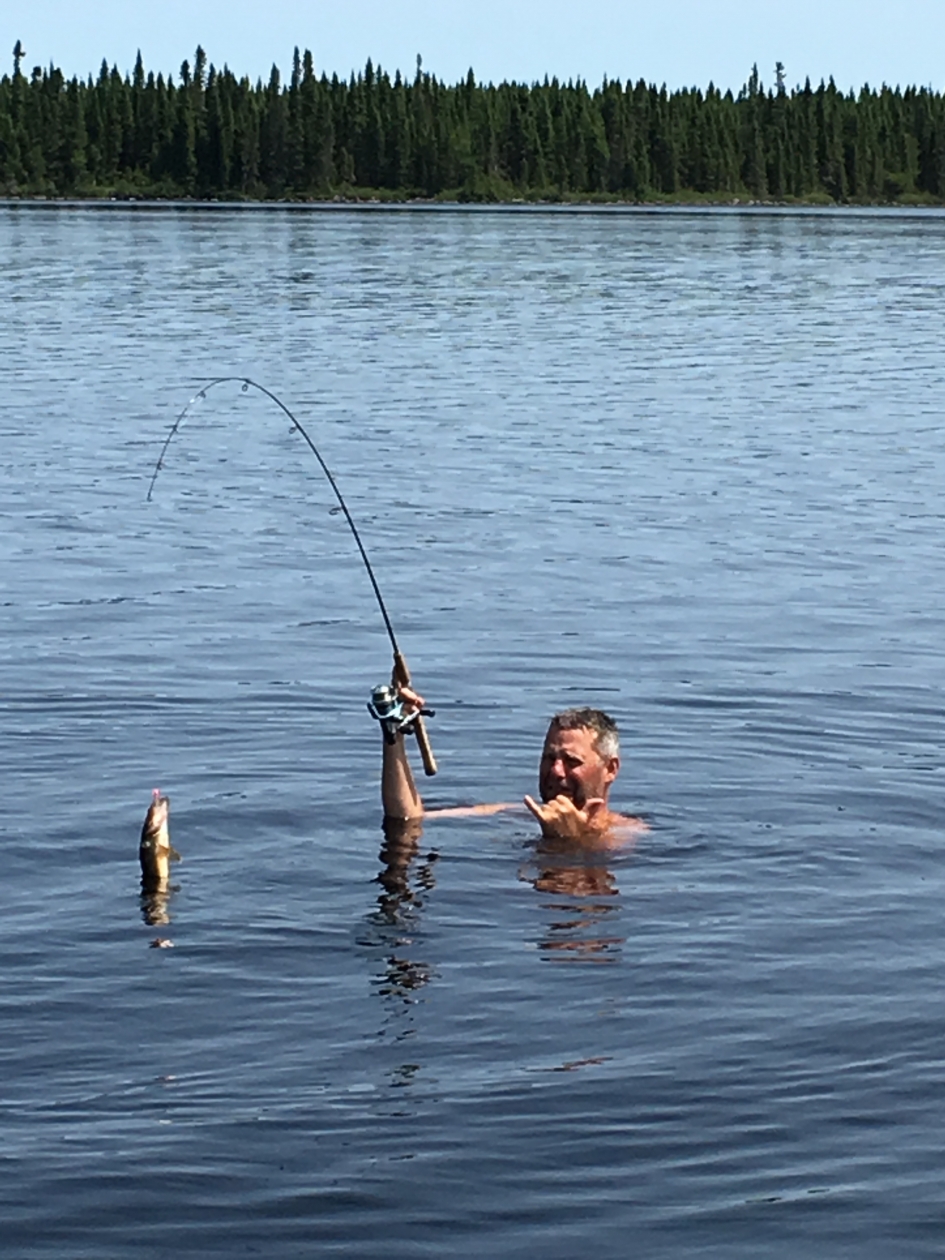 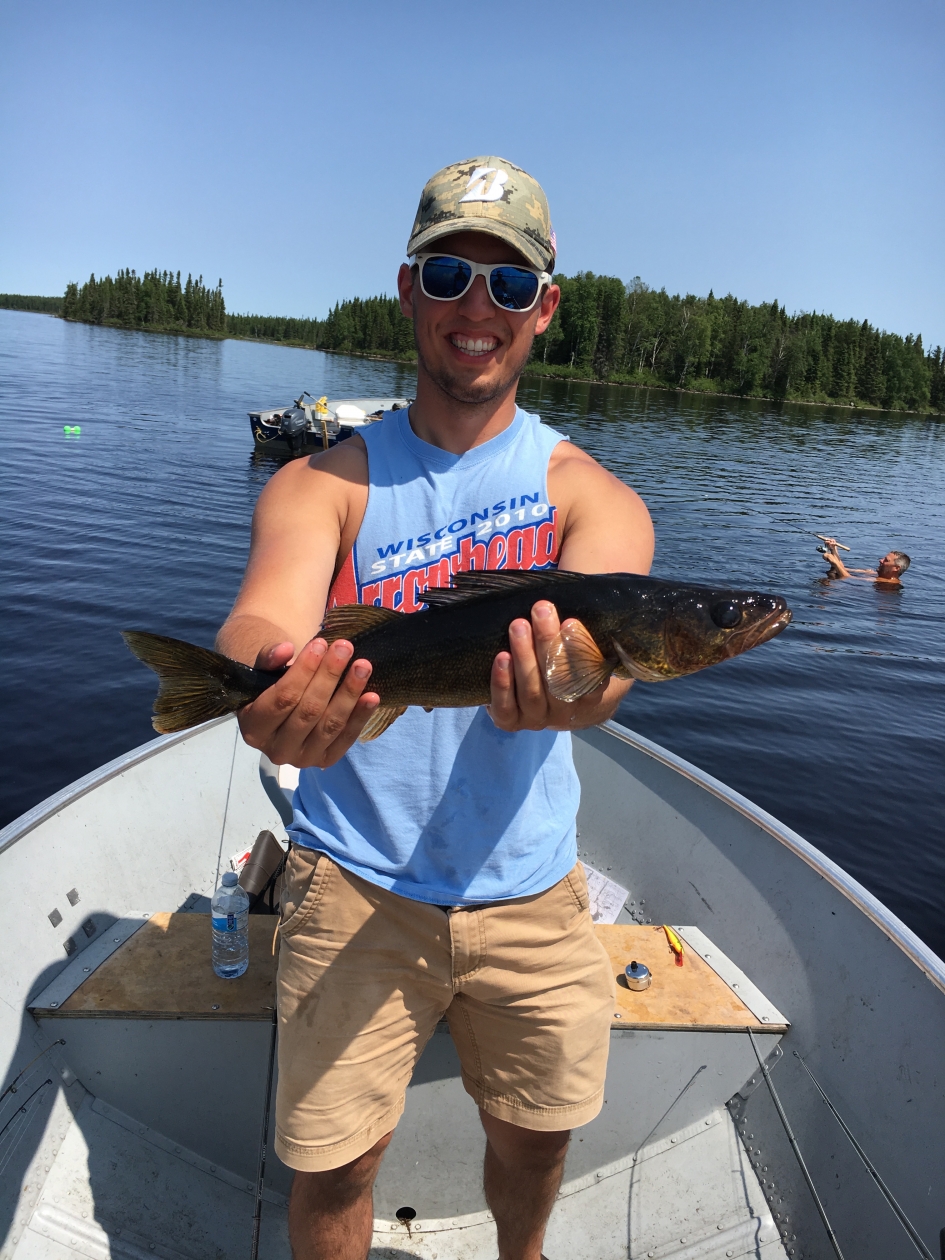 This week at Wright had a late mayfly hatch which made the fishing more challenging. The largest walleye came to 21 inches, and were caught on jigs and minnows, trolling the shoreline in 10 feet of water. The walleye bit better in the mornings while the northern were pretty consistent throughout the day. The largest Northern came to 32 inches, and were caught using mepps and jigs in about 5-12 feet of water.

This week was a busy one at McVicar. There were over 2000 walleyes caught with the largest being 26 inches long. Walleye were biting all day on jigs and minnows for this group as they trolled around points and reefs on both Lang and McVicar lake. The northern were also biting this week on McVicar. This group brought in 100 northern with the largest reaching 39 inches long, primarily using jigs. The highlights of the trip for this group were 2-26 inch walleyes, 2-25 inch walleyes and 9-24 inch walleyes.

This was a great week for both welleye and northern fishing. There were 2100 walleye caught with the biggest sitting at 24.5 inches. This group used 1/8 ounce jigs as well as lindy rigs trolling both shorelines and reefs. Some of the hot spots were north of the cabin, bottle reef and below the rapids. They fished in about 20 feet of water and the walleye bit all day long! Northerns were also lingering around these spots. This group caught 50 northern this week with the largest reaching to 40 inches. They also bit any time of day, but these anglers found that spinners and spoons were helpful.

Although the walleyes were still feeding on mayflies, both walleyes and northern were hungry. This group caught thousands of walleye with the biggest sitting at 24 ½ inches long. Jigs and Minnows, blue and silver traps twister tails and doctor spoons were best to use for walleyes this week. The fish moved around the lake throughout the week. On day 1 & 2 they sat in shallow water about 5 inches. On day 3-7 they were swimming around reefs in anywhere between 8-15 feet of water. Early afternoons were best for walleyes. As for northern, this group noted that they caught hundreds of northern with the biggest being 39 inches long. They used big doctor spoons and large buzz baits. The fish were hanging around the weed beds and big rock structures in shallow water. Mornings and afternoons where there was low light was the best time of day to catch northern. The upper lake rapids were good early in the week and some big pike were caught in the south end later on. SPRO traps worked great for both walleye and northern. Vertical jigging with ¼ oz- 3/8 oz jigs tipped with minnows and/ or plastics worked well. 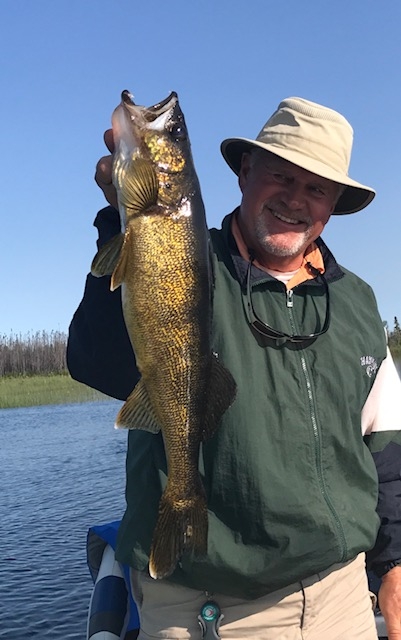 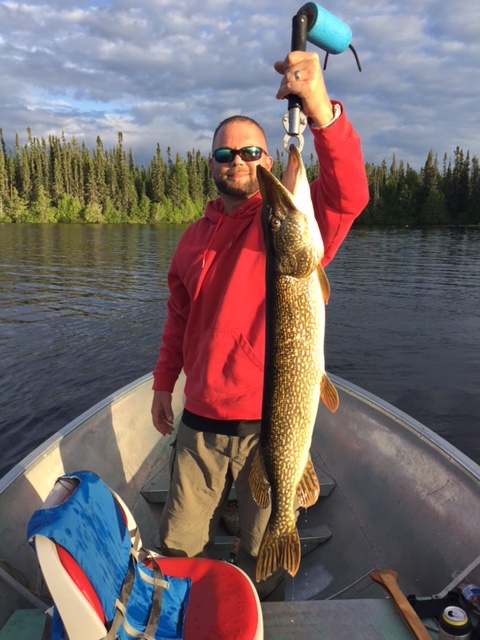 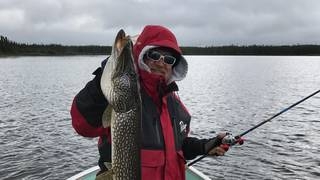 Click this picture to watch an awesome video of their trip!

A Father, son, and two kids had a great 6 days at Grace Lake. They caught well over 1,000 Walleye. Most were in 6-8 feet of water even with a 70 degree water temperature. The best time of day was in the evening right before dark. They were very impressed with the facilities and the service they received.