What a fantastic week on Cedar!! The weather warmed up and the fishing REALLY warmed up. Although the BEST fishing was still further down the lake, our guests said it was well worth the 20-minute boat ride. They reeled in one after another… Walleye, Smallmouth, Northern, Crappie, and some Jumbo Perch. The Walleye were in about 7-10 feet of water and were biting like crazy on 1/8 oz. jigs with live minnows. The Smallmouth action was outstanding… the lure of choice was an 1/8 oz. jig with a salt & pepper grub with a spinner. The Walleye were also biting on that same set up. They also used #3 Mepps Foxtails for Bass and had a good time throwing Hula Poppers into the rocks and brush along the shore. They also threw some chartreuse spinning blades and everything was biting on those including Northern. What a great week! Hopefully this warm weather carries through into next week and the fishing keeps up like this. Lots of fun! 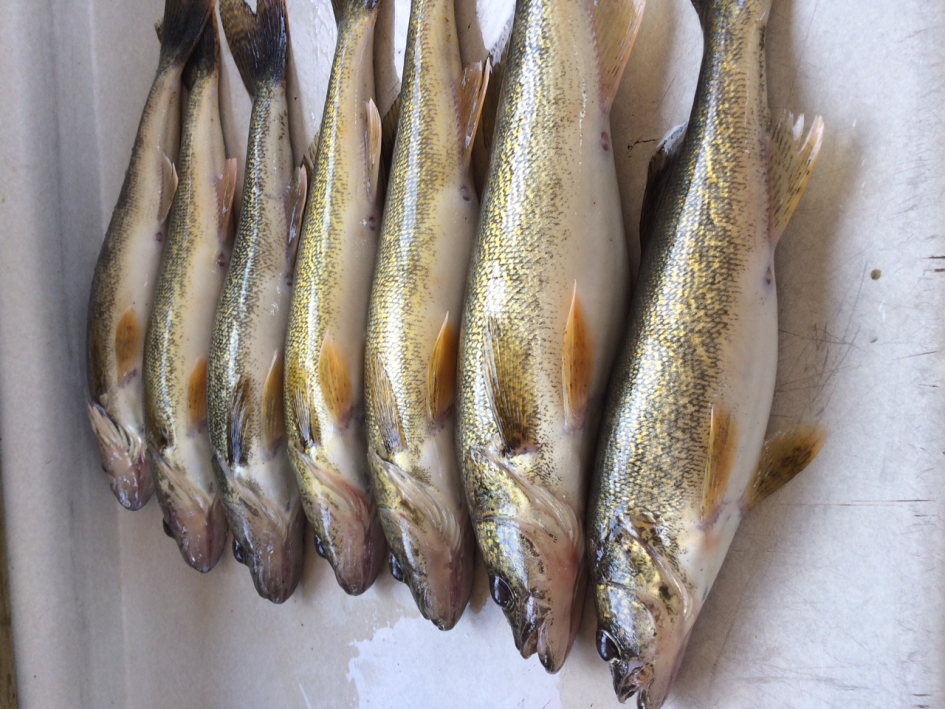 Overall, the Walleye fishing was a little slower on the Chain this week, however they had some good action using Rapala’s on Cobble Lake. There was an incredible 32-inch Walleye caught along with many other “nice eaters”. Smallmouth fishing was good and the Muskies are getting more and more active chasing after the Walleye. 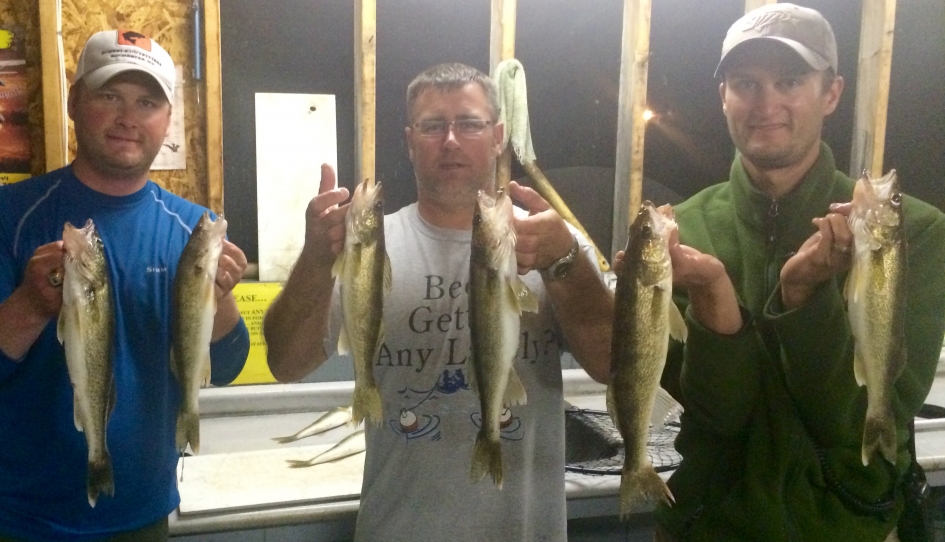 These 4 had a relaxing week at Grace Lake. They caught lots of Walleye and Northern and their biggest was a 42-inch Northern caught on a fly rod!

This group of three caught 440 Walleye and 79 Northern on Upper Wapesi. Their biggest Walleye was 26 inches and their biggest Northern was 30 inches. The fishing started out a little slow, but as the weather warmed up the fishing really picked up. They had one after another… nonstop action! They fished with leeches and minnows with Little Joe’s and the fishing was best on the shoreline across from the cabin and to the North. The fish were in 6-10 feet of water and the bite was good all day long. They said the scenery was beautiful, the seclusion fantastic, the accommodations were comfortable and cozy, and the fishing was the best they have ever seen.

This group caught hundreds of Walleye using jigs and minnows in 6-7 feet of water. They caught 120 Northern on Craklin Raps and the biggest was 37-inches. Their biggest Walleye was 24-inches.

This group had slower Walleye fishing this week. It sounds like the fish are still scattered as they found them in anywhere from 8 to 30 feet of water! They didn’t start using minnows until later in the week and once they made the switch they found the fishing to be much better. They started out with yellow and black spinners, but minnows on yellow or white jigs proved to be the best. Their biggest was 22 inches. They had some pretty great Northern action while fishing with any colour of spinners in the weedbeds. Their biggest Northern was 37.5 inches and it sounded like they caught quite a few around that size.

Antenna Lake experienced a pretty significant May Fly hatch this week. Regardless of that, this group still boated over 500 Walleye and the biggest one was 25 inches. They fished with lead head jigs and minnows and also floating jigs with minnows (Lindy Rigs). They found the Walleye mostly off of points and flats in 7-9 feet of water. They caught Northern on Rapala stick baits along shorelines and points in 3-4 feet of water. The biggest Northern was 38 inches. They said Antenna was the best Outpost they’ve ever been to and they loved the free minnows!

This couple had a great week at Pusher Lake. They caught lots of Walleye and some Northern with the biggest being 23 inches (Walleye) and 27 inches (Northern). They used Lindy Rigs with minnows, but noted that the Walleyes would bite on anything. The best spots were along the shorelines in 8-12 feet of water.

This group of 4 caught 925 Walleye on Meen Lake this week! They didn’t catch any real big ones, but said the fishing was outstanding. They used yellow jigs with minnows and fished in 8-15 feet of water along the shorelines. They caught 327 Northern on spinners and spoons. They had a wonderful time; loved the accommodations, the plane rides, and the fast-action fishing!

Using white grub on a white jig, this group caught lots of Walleye this week at Wright. Their biggest Walleye was 19.5 inches and they found the fish in 10-12 feet of water. They used top water Rapalas for Northern fishing and their biggest Northern was 35 inches.

This week we had a group of 4 with father, son and 2 grandkids. It was the kids first time to Canada. They caught all of the fish they could handle with some of the best fishing right off of the dock!!! The kids learned all about tying a jig on, baiting their hooks, and catching, landing and releasing Walleyes. They are definitely coming back in the future. All fish were caught on 1/8 oz. jigs with Clark's minnows!!!  Most fish were in 8-12 ft. of water. Any color of jig worked.

This group of adults and children had a fun week at McVicar Lake. They caught lots of fish and had a great time. The Walleye and Northern were quite shallow… anywhere from 3-8 feet. The best spots were the areas/bays going into portages. They fished with minnows, Husky Jerks, and Power Grubs. The biggest Walleye was 26 inches and the biggest Northern was 40 inches.

This group of 8 guys caught a total of 5934 fish this week at Kapikik. This broke down to 5361 Walleyes, 497 Northern, and the balance being Sauger, Perch and even a few clams.  They were fishing primarily with jigs and minnows targeting Walleyes.  The best spots were in 6-10 feet of water, primarily near the running water.  They were catching them anytime during the day, but 8-10pm was especially a hot bite.  They had numerous Northerns hit Walleyes while reeling them in, and some aggressively coming out of the water trying to hit them.  Their big Walleyes were 28", 27-1/2", 26-1/2", and their big Northerns were 42", 38", 37", 36" and 35".  They had a Northern break off a lure at the dock one evening and then they caught that same Northern with that lure it's mouth 1-1/2 miles away from the dock the following evening, which proved that they can travel fairly far in a day! 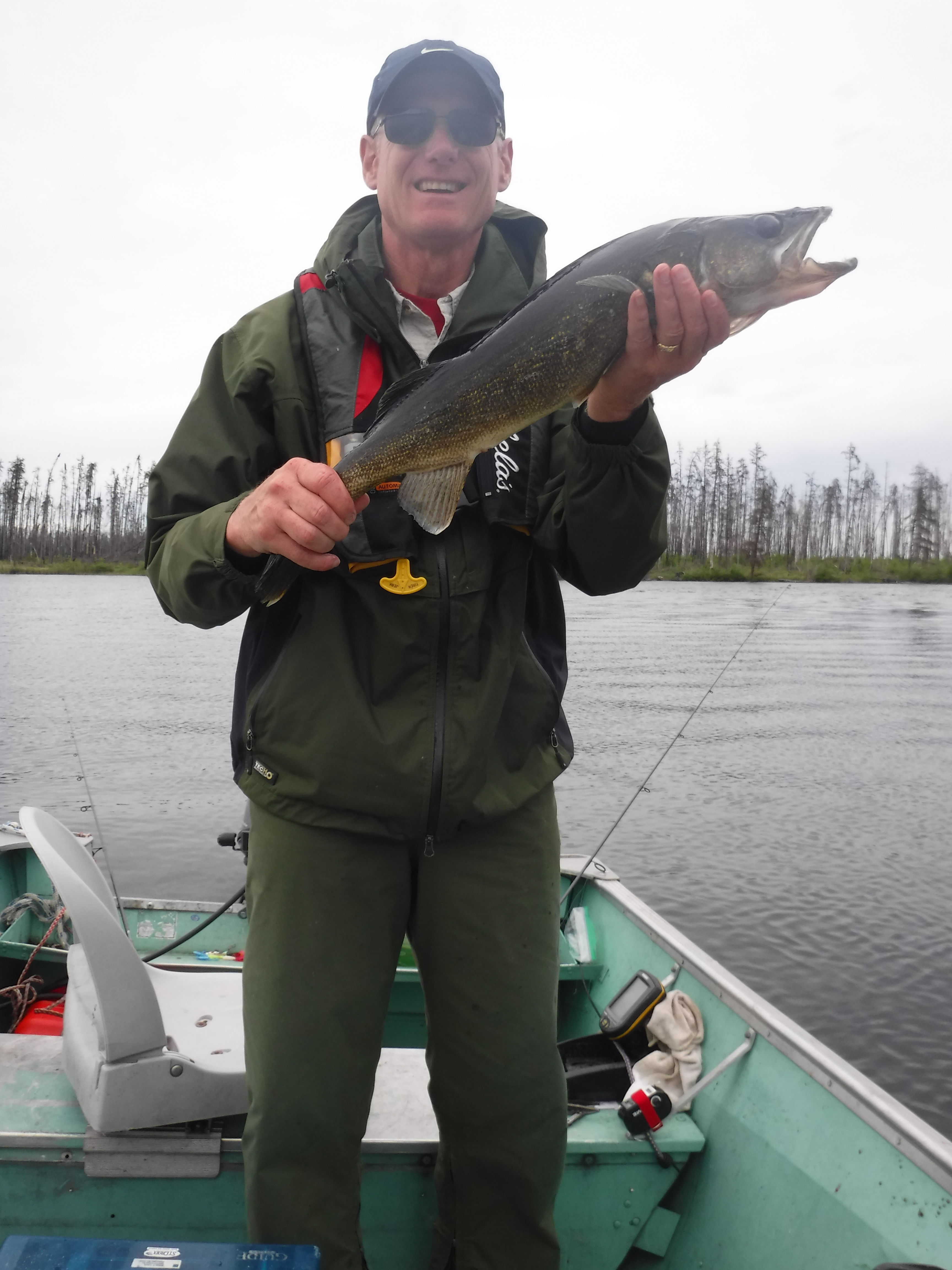 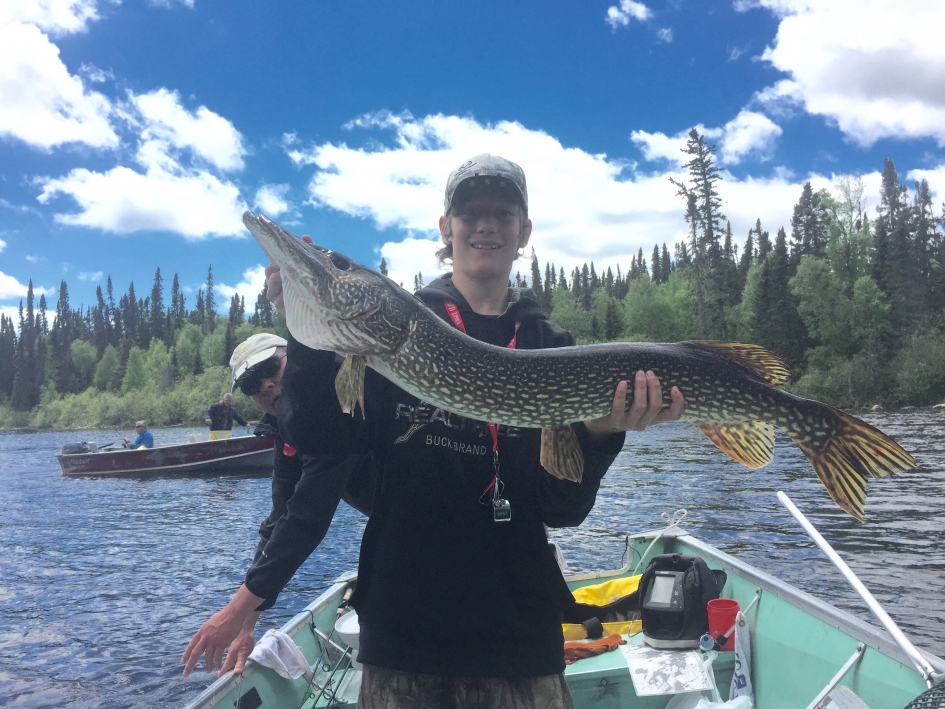 This was their tenth trip to Fawcett and it didn't disappoint! Hundreds of Walleye and Northern Pike! Largest Walleye was 28" and Largest Northern was 40". Many Walleyes over 20". Most fish were caught in 2-10ft of water. Caught most of their Walleyes on Jigs and Minnows and Northerns on Spoons and hand tied jigs. The new Party Deck is awesome! 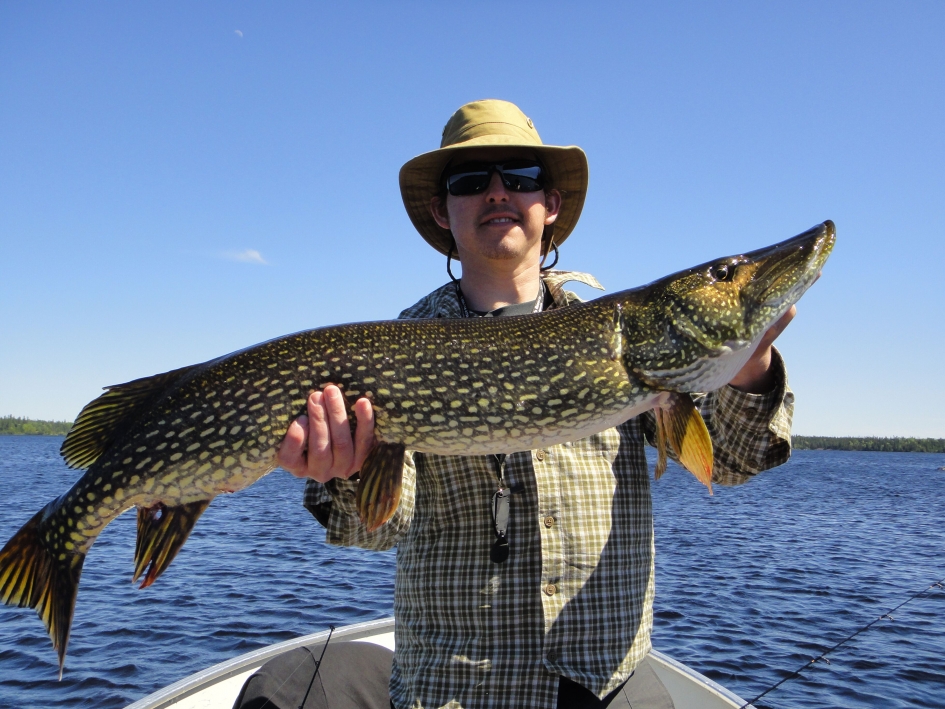 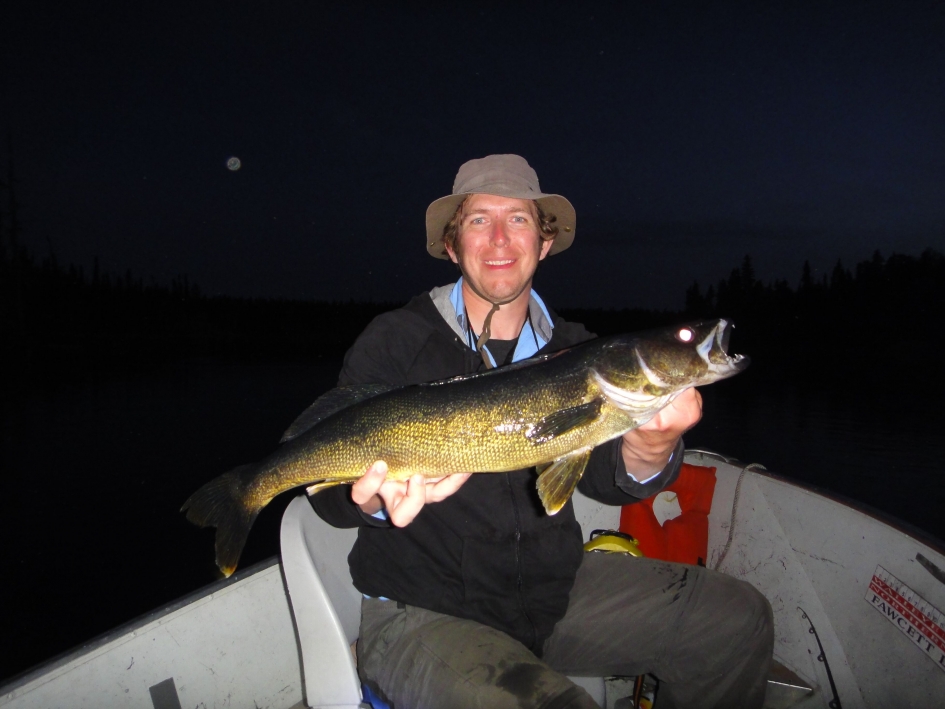