After speaking with some guests at the end of the week, it sounds like for Walleye fishing, quantity was better than quality. They caught LOTS between 15 and 18 inches. One group caught a 26.5-inch and one group on the very last night caught a 29 inch Walleye! (Picture below.) She caught that on a jig with a worm. Most people that I spoke with fished with either minnows or leeches. I was told that the BEST fishing was between 7 and 9:30 p.m. and that the Walleye are just starting to move onto the reefs. Most were caught in 10-15 feet of water. The Crappie fishing was outstanding once again this week. And one group that I spoke with caught between 30 and 40 Bass. 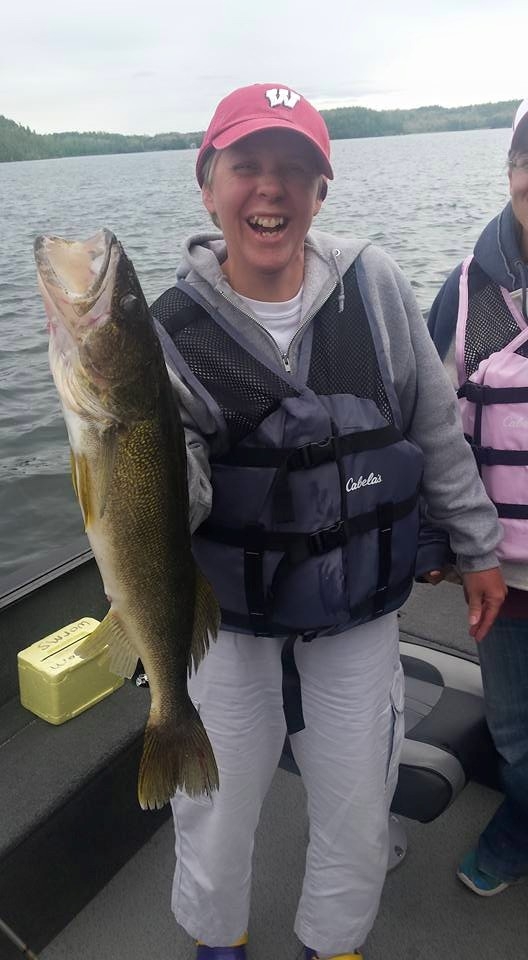 Fishing was great this week! Lots of Walleye action on the entire chain, even with the mayfly hatch. Lake Trout fishing has been excellent on Augite (a portage lake). It is living up to its awesome reputation for its good Trout fishing – even to the novice! Trout fishing has also been good on the chain. All in all, a great week. We had lots of new people in camp who are excited to come back next year.

This group of 4 guys caught 2,780 Walleye! In one day they caught a total of 588!! They fished with a jig and a minnow in 8 feet of water. The water temperature is still at about 62-degrees across the board. The largest Walleye they caught was 27 inches. They said the best fishing was always in moving water and typically between 7:00 p.m. and 10:00 p.m. As for Northern they caught about 290 mostly on jigs and minnows, some on weedless spoons. They caught 3 that were 36 inches and those were their biggest. The Northern were mostly caught while Walleye fishing. They noted that the cabin was absolutely awesome and they really appreciated the upgrade to 15 HP motors.

This group caught about 2,000 Walleye in anywhere from 3 to 12 feet of water. They fished rapids and shorelines and the fishing was the best almost anytime of day. Their favorite bait was Gulp minnows and the biggest Walleye they caught was 28 inches (8.2 pounds). The caught about 200 Northerns while fishing with jigs. The biggest Northern was 34 inches. They said the weather was beautiful and the equipment was all good.

This group of 3 caught 666 Walleyes. They fished shorelines in anywhere from 4 to 17 feet of water using a jig and a minnow. Their biggest one was 26 inches. They caught 221 Northern fishing weedbeds and shorelines. They used spinner baits and the biggest one caught was 31 inches. They said the weather was great, cabin was great, and they had an awesome time!

This group of 4 caught about 1,200 Walleye. They fished using a jig and a minnow on reefs and drop-offs in about 5-12 feet of water. The water temperature was warmer here – about 67 degrees. Their biggest Walleye was 26 inches and 6.7 pounds. They caught 225 Northern using silver spoons in 5-7 feet of water. The best fishing was morning and evening and on shorelines and weedbeds. The largest Northern was 36.5 inches. The weather was between 60 and 68 degrees all week. They said the equipment worked great, the cabin was great, and they had a great time. 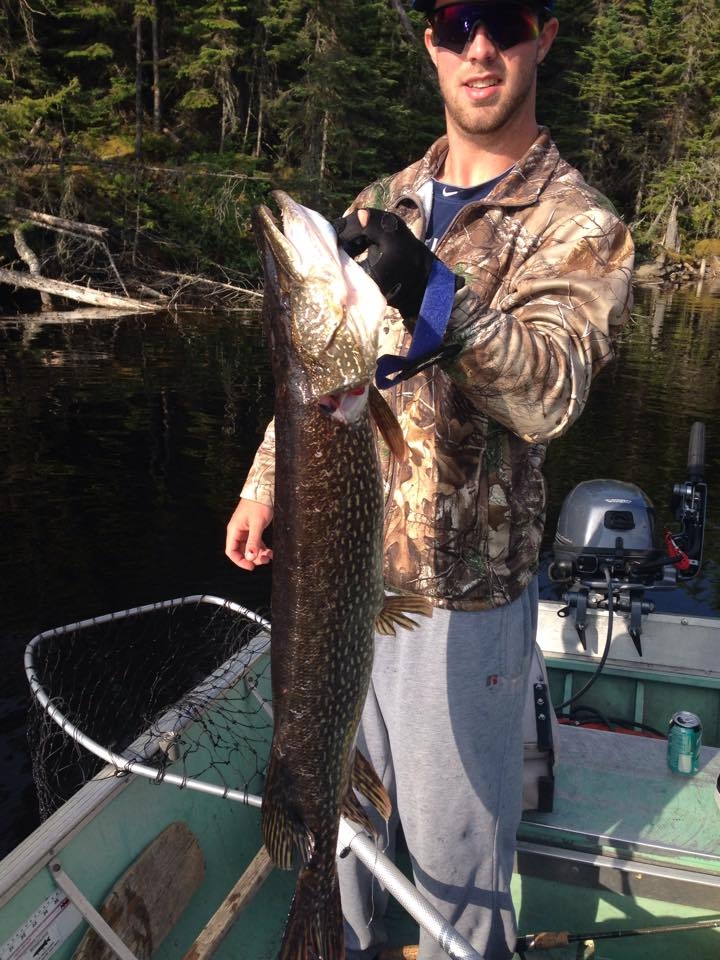 Fishing at Kam was tougher this week. The fish were scattered and the water temperature was still very low resulting in a slower bite. This group of 4 caught about 425 fish. The largest Walleye was 21 inches and the largest Northern was 31 inches. They fished using jigs with minnows or worms. The best time of day was in the evenings.

This group of 4 caught 2,001 Walleye. They fished with jigs and minnows in 9 feet of water. The largest Walleye was 24 inches. The best fishing was between 1:00 p.m. and 4:00 p.m. with wind and on reefs and points. They caught only 36 Northern, but they were caught by accident while fishing for Walleye. The largest Northern was 32.5 inches. They said they had a great time!

This group of 4 caught 819 Walleye. They fished on shorelines and off the docks. Best fishing was in 8-10 feet of water and between 10:00 a.m. and 6:00 p.m. They said the fish seemed to be scattered. Their biggest Walleyes were two 27 inch and one 28 inch. They fished using storm thundersticks. They caught 597 Northerns also using Storm Thundersticks and jigs with minnows. They caught 10 Northern 40 inches and over (three 40’s, 41, three 42’s, 43, and two 44-inches.) They had sunny and windy weather most of the week. They said the cabin was fantastic and the staff were friendly! They also noted that they saw 2 moose and some eagles and beavers. 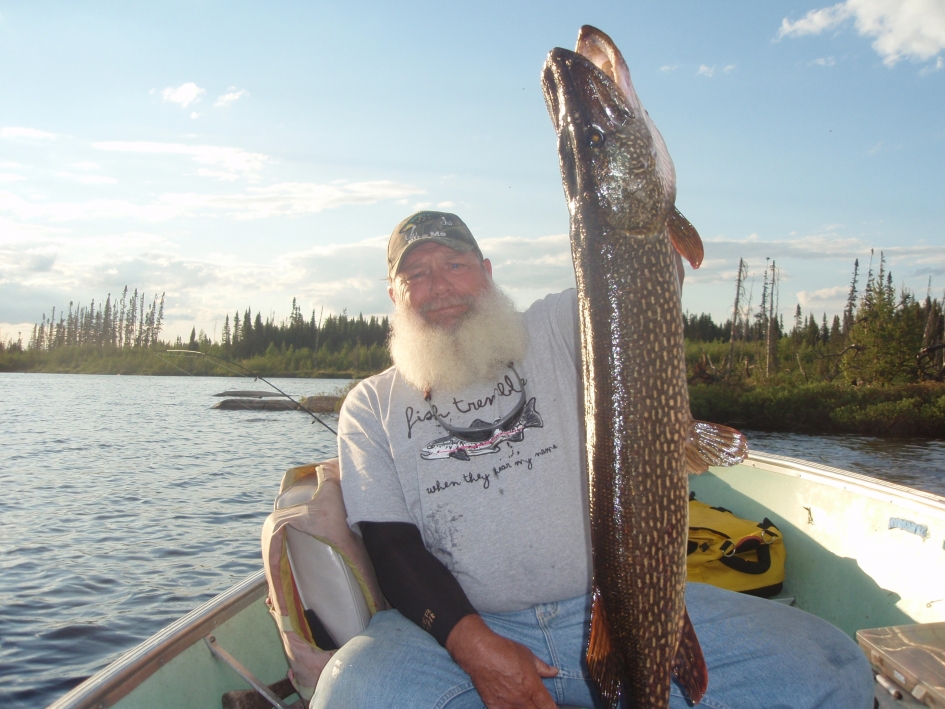 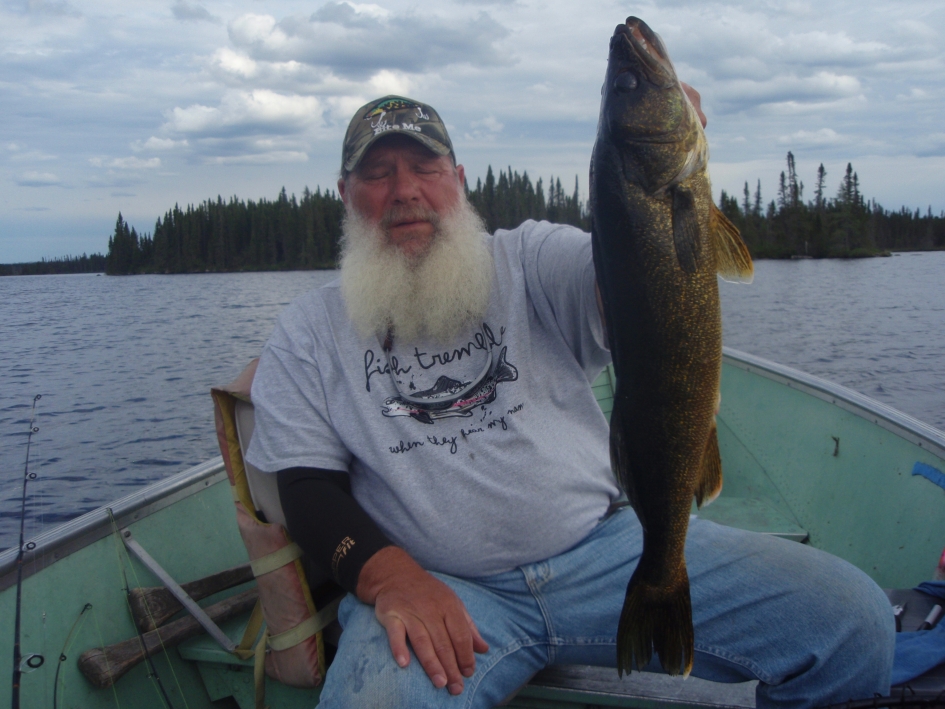 This group caught too many Walleye to count! They said definitely over 3,000. THey used 1/4 oz jigs with curly tail grub (not live bait!) They fished in 4-12 feet of water anywhere on the lake including off the dock. Their largest Walleye was 29 inches. They said they caught over 1,000 Northern and the biggest was 44 inches! They used 1/4 oz jigs with curl tail grub and also spinner baits and crank baits. They found Northern all over the lake. They had rain only one night and great weather the rest of the week. This was their 16th trip to Wright Lake!