The beginning of the week starting out strong! Everyone was limiting out on Walleyes and Perch and even boating some really nice Muskies! There was a 49” caught on one of the first days and a few other nice ones throughout the week. The Perch were schooled up in Sawmill Bay and Hatfield Bay. The Walleye were super easy to find and were biting really good at the beginning of the week, but the bite slowed right down towards the end. We may be in for a major May fly hatch because it sounds like the Walleyes must have full bellies.

It was a really good week on the Chain! The opening of Muskie was very good. The biggest Muskie caught was 47 inches. Jimmy and his wife caught 4 Muskie while Walleye fishing with spinners. The Walleye fishing was good overall, but the may flies were in full hatch towards the end of the week. The nice thing about the chain is that not all of the lake get hit at the same time. People have been doing very well with crank baits on the rocky drop offs lately.

This couple caught too many fish to count! Their biggest Walleye was 23 inches and their biggest Northern was 35 inches. They said anything worked for Walleye including trolling with Rapalas when the high winds made the fishing difficult. One day they had light winds and used slip bobbers… they caught over 150 Walleye without moving the boat. The best spots were shorelines and points in 7-10 feet of water and they were biting all day long. The average Walleye was 17-20 inches. 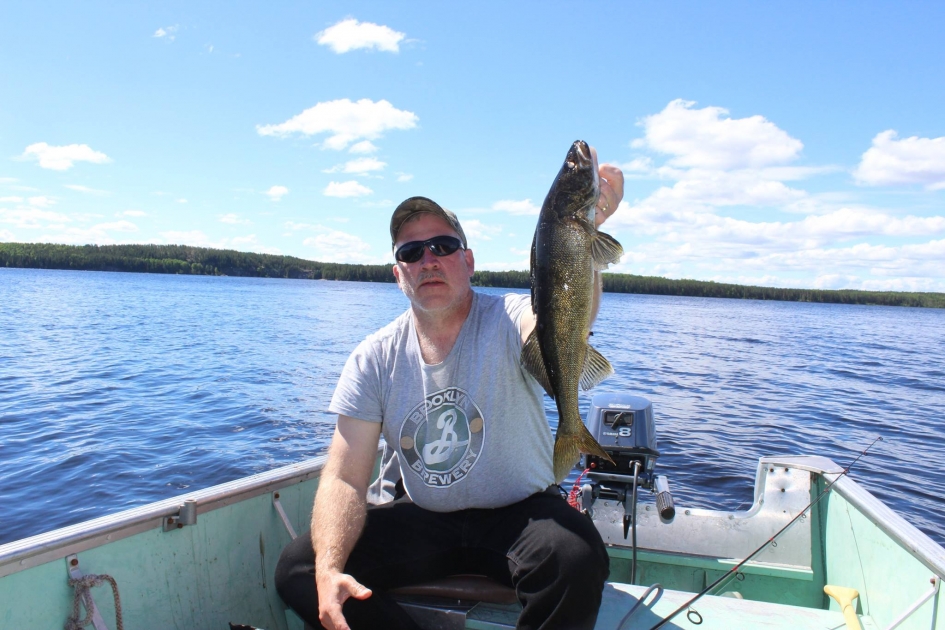 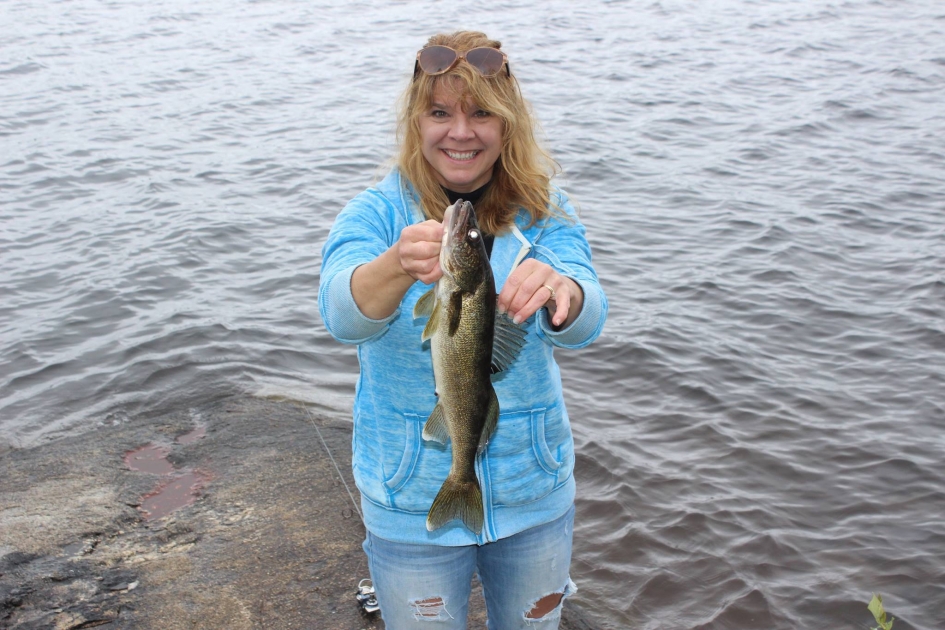 This was their second trip to Austin (last one was in 2012) and they said the fishing is still as good! Their biggest Walleye was 22 inches and their biggest Northern was 35 inches. They said the caught fish on almost every cast. The fished Walleye with swimbaits, chartreuse jigs with spinners, and minnows. They fished Northern with swimbaits and 6” chartrues ringtail worms. The best spots for Walleye were the portages and rock points in 5-6 feet of water. They had their best luck fishing 50-75 yards from the mouth of the portage, throwing a swimbait in natural colours towards the portage, and slowly retrieving it back to the boat. The best spots for Northern were in the weedbeds in 1-4 feet of water.

These four had great fishing on Dobie Lake. They caught lots of Walleye, Northern, and Perch too! They had tons of Walleye in the 22-23-inch range and a few 24 inch Walleyes. The one youngster caught a 36-inch Northern right off the dock!

This couple caught lots of fish including some big Walleye and Northern! Their biggest Walleye was 24 inches and their biggest Northern was 44 inches! They fished with jigs and minnows and sounds like the best spot was right off the dock! They also fished around the islands in 4-6 feet of water. The fish were biting all day, but just before dark was always best.

This trio caught 834 Walleye despite the TERRIBLE weather! Their biggest was 23 inches. They did not fish for Northern, but caught some accidentally and the biggest was 36 inches. The Walleye were in 8-13 feet of water and best spots were along the shorelines. Best bait was minnows on jigs.

These guys caught over 3,500 Walleye and 250 Northern. The biggest Walleye was 23 inches and the average size was 18-21 inches. The best bait was jig and minnow and the best spots were wind blown shores and along edges of weedbeds in 5-8 feet of water. The best lure for Northern was silver doctor spoons and they were in the weedbeds in 4-6 feet of water. The biggest Northern was 40 inches. They also had a 39-inch and lots of 35-38 inch Northerns. They said their best fishing was actually in Granite Boss where they caught a lot of Perch. They back trolled with 1/8 oz jigs along the weed edges. There was a deep hole off a point where the lake narrows and they caught fish every cast.

They had great Walleye fishing at Upper Wapesi Lake! The fish were biting all day and on anything with a minnow. Their biggest Walleye was 23 inches. The best spots were along shorelines and reefs in 8-14 feet of water.

This group caught over 1,500 Walleye fishing with a jig and minnow 90% of the time. They said the free minnow supply really made the fishing experience excellent. They caught 5 25-inch Walleyes! They said the portage lakes were good and McVicar itself was even better than previous years. The Walleye were about 12-18 feet deep and although they bit all dya, the evening was best. They didn’t fish for Northern, but caught about 100 while jigging for Walleyes.

The Walleye fishing was fantastic this week. They were biting all over the lake and on any bait/lures. They used a lot of bottom bouncers with minnows. The Walleye were in 12-15 feet of water and they caught 3 over 26 inches! The Northern fishing was slower. They were not found in the Bays. They managed to catch 3 over 40 inches though.

Despite the crappy weather, this group caught thousands of Walleye and hundreds of Northern. The Walleye were still in the moving water and the windblown bays were also good. They noted that they are starting to spread out from the moving water as they were actually finding them everywhere. The Walleye were biting on anything. They used a lot of artificial baits including twisters. The caught some 24’s and lots of nice healthy ones. They used spoons for Northern and caught about 50 over 30 inches. They said they were all very fat and healthy. Their biggest Northern was 40 inches. To top it all off they saw the camp caribou 3-4 times a day wandering around in the yard.