One group of 8 caught and released 235 Trout! They broke their lats record of 129. It’s safe to say the bite is still hot! The Trout have started to move deeper and are now being caught jigging with heavier spoons in 30-60 feet of water. The portage lakes are continuing to produce large numbers of Walleye and guests have been commenting that the size of the fish are getting bigger. Many Walleye caught and released in the 18-22” range.

It was a good week on the Chain… everyone was catching plenty of Walleye every day and the smell of fish frying filled the air every evening! There were even some entries on the “brag board” with some Walleyes over 22 inches. Bass fishing was also good this week with some nice sized ones caught and released.

Cedar seems to be off to a strong start this year! There were a few slower days this week due to some weather changes, but overall it was a great week of fishing. Guests are catching them in 8-10 feet of water and quite a few over 22 inches have been caught and released. On the days when the Walleye bite was a little slow, nobody went hungry as the Crappie bite was consistently on fire.

As always, Grace Lake produced incredible numbers for Walleye. This group caught thousands… between just two of the guys, they had 1,502 for the week. They fished for Walleye with jigs and minnows in 6-8 feet of water along the shorelines and preferred jig colour was white. Their biggest Walleye was 23.5 inches. Most Northerns were caught on jigs & minnows, including the biggest one which was 35 inches. They also threw spoons for Northern and caught lots.

The best fishing this week took place in the river closest to the cabin… they were catching Walleye in such shallow water that could actually watch them bite the jig! The biggest fish were caught by the bridge, including a 24 inch Walleye and a 38 inch Pike. They did fish the portage lakes, but the best fishing was on the main lake. They even caught two white fish! All in all it was an exciting week on Wright Lake.

This group described the fishing as “excellent”. After a late start on day one due to fog delays, this group started their trip off right by catching dinner right off the dock. They spent most of the remainder of the week at the bottom of the falls and above the rapids. They literally caught a Walleye every cast! The used a slip bobber and minnow and their biggest Walleye was 24 inches. They caught their biggest Northern (35 inches) while fly fishing. The Northern were very active and they said you could catch hundreds a day if you wanted to. The Pike were hanging out in shallow water in the mud flats.

This group had an outstanding week of Walleye fishing! The fish were in 4-12 feet of water and could be found anywhere with current. Jigs and minnows were the main baits used, but they also caught lots of fish on various plastics. The Berkley power minnows and paddle tail type of plastics worked great. One member of the group fished exclusively with plastic bait (smaller Crappie baits on 1/16 oz and 1/8 oz jigs) and had great success. This group also hammered the Pike… they caught 31 over 32” and the largest were 42 inches, 40 inches, and 4 Northern at 38 inches. They had the best luck with Doctor spoons, Johnson Silver Minnows, and various Rapalas. They also had several visits from the camp mascot (Bob the Caribou, as they call him). The caribou would actually walk right up to the front of the cabin when the guys were sitting out on the deck… amazing!

Walleye and Northern fishing were both great this week.  They caught too many Walleye to count with the biggest being 20 inches. They fished with a jigs and a minnows along shorelines, reefs and weed beds in about 6 to 10 feet deep.  Best times for the bite were between 5:00 and 10:00 am and from 4:00 to 10:30 pm.  About 100 Northerns were caught with 24 over 30 inches and 10 between 38 – 40 inches, and 5 over 40 inches!  The biggest was 43 inches.  Northern were caught mainly on shorelines and weed beds using spinners, crank baits, Johnson silver minnows, spoons and suckers in 4 to 10 feet of water and all day long.

It was awesome walleye fishing on Otatakan this week with hundreds caught using minnows on Chartreuse jigs. They fished along shorelines and around the reefs in 8 to 30 feet of water in early am and later pm.  The largest was 24 inches.  They caught dozens of Northerns using spinners, buck tails and minnows on jigs. The Northern were along shorelines and reefs in 6 to 12 feet of water and best time of day was late afternoon.  Largest was 37 inches.

Unbelievable Walleye fishing this week… over 800 caught! The action was non-stop.  They caught Walleye using jig heads with a tail on… they didn’t even need minnows! They fished the shorelines on west side mostly. Walleye were 6 – 14 feet deep and fishing was good all day. The largest was 26 inches. They also caught about 20 Northerns while walleye fishing with the largest being 36 inches.  This group quoted “Awesome Lake – fishing was non stop”.

They caught lots of Walleye bobber fishing and some while trolling as well. One of the best spots was off the dock. The Walleye were about 5 feet deep and best time of day was in the evenings. They caught lots of smaller Northerns and only a few trophies. The biggest was 44 inches. Their biggest Walleye was 19.5 inches.

Wow!  Over 2,500 Walleye caught with the largest being 25 inches… lots over 20 inches. This group used 1/8 oz. chartreuse jigs with minnows, No.5 shad rap, black and white 4” grubs, swimming minnows, and power baits. They fished in the river and along shorelines in 4 – 8 feet of water.  Fishing best all day if overcast, and early and late if clear.  They also caught 200 Northerns with the biggest 39 inches. For Northern they used black single spins, yellow/red daredevil spoons and they fished on the deeper points and reefs in 8 feet of water.  Best time was early in the morning and late in the day.  The weather was cool and  it rained often which helped the fish bite all day.

This group had great Walleye fishing with too many to count.  They used white jig heads with minnows. The best fishing was along shorelines and in the river mouth in 5 to 15 feet of water.  Their largest Walleye was 22 inches.  They also caught about 30 – 40 Northerns using spoons in river mouths in 1 to 5 feet of water. The largest was 33 inches.  Best time for fishing was early in the mornings.

This group of 10 had a great time fishing! The weather wasn’t the best at the beginning, but they still caught a lot of fish.  As the week went on, the fishing got better as did the weather.  Their largest Walleye was 24 inches and their largest Northern was 42 inches. They used jigs and minnows and red Dare Devils. They trolled around points and drop-offs, but found fish almost anywhere from 4 to 25 feet deep.  Mornings were better than evenings.  They caught about 200 Northerns using red Dare Devils in weeds. They were in 1 to 25 feet of water and mornings and late evenings were best. They also caught some big perch while Walleye fishing.

Great week of fishing with 710 Walleye caught!  The largest was 28 inches.  For Walleye they used jigs and minnows, jig/minnow/plastic combo, or spinner baits. The best spots were along shorelines, reefs and weedbeds in 6 - 12 feet of water. Mid afternoon to dusk was the best time of day. They also caught 246 Northerns with the largest being 40 inches!  They used spoons, spinner baits and jigs with plastic in 6 feet of water or less. These guys also caught some big Perch while Walleye fishing!

This group caught 750 Walleye with the biggest being 22 inches using jigs, minnows and crank baits.  The best fishing was in the evening on shorelines, reefs, and weedbeds in 3-8 feet of water. They also did well on the portages. They did best in moving water, and in narrows.  The best spot was down below the falls on the portage lake.  They caught 300 Northerns using crank baits – best in weed beds.  Largest was 30 inches.

This group was new to McVicar, but they liked it so much that they are coming back next year! They caught over 1,000 Walleye with the biggest being 26 inches. They caught lots between 20 and 26 inches. They raised a few Northern while fishing for Walleyes and saw one that was between 40 and 45 inches. The biggest Northern they got in a boat was 32 inches. McVicar is always good for quality and quantity! 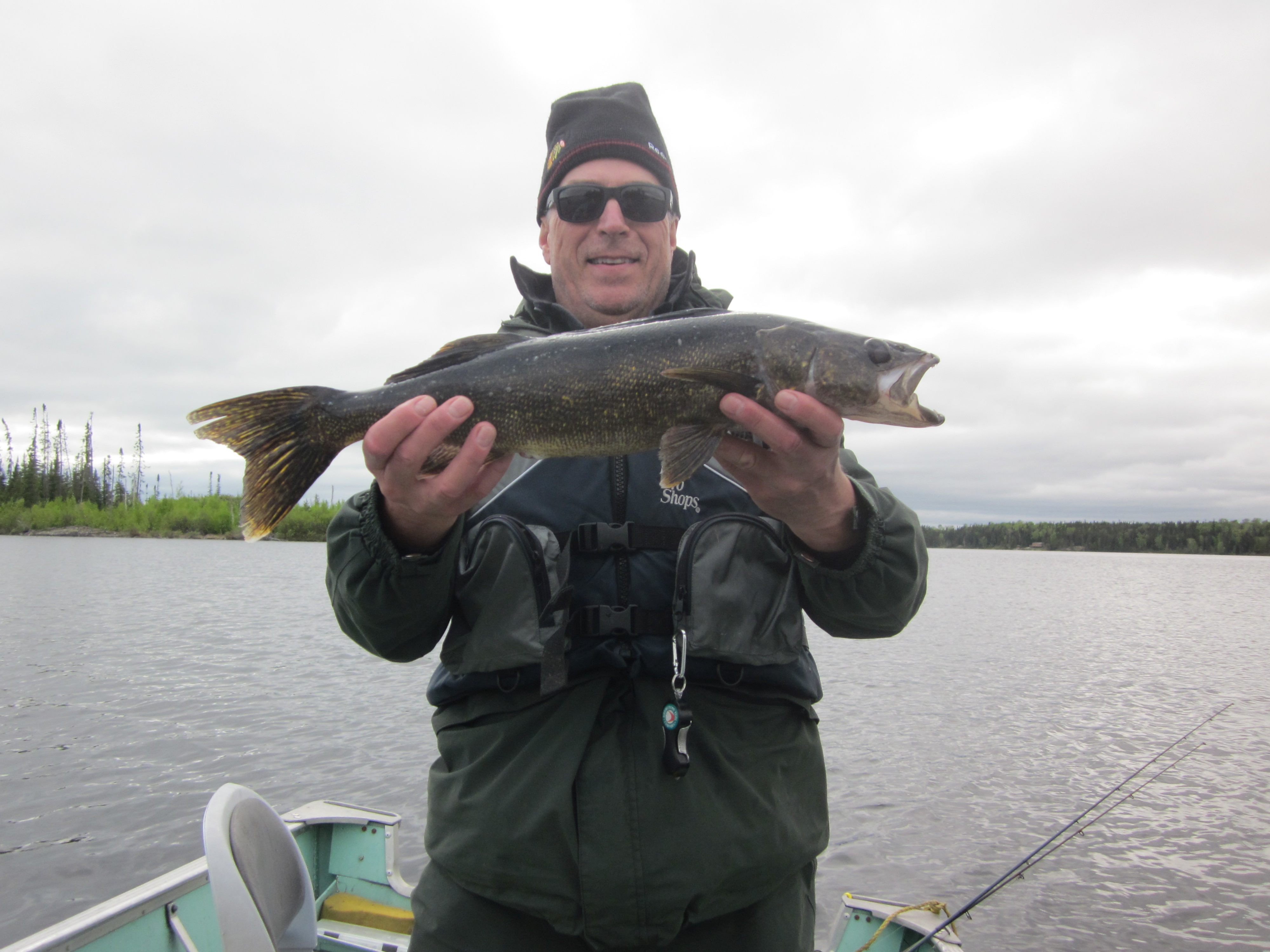 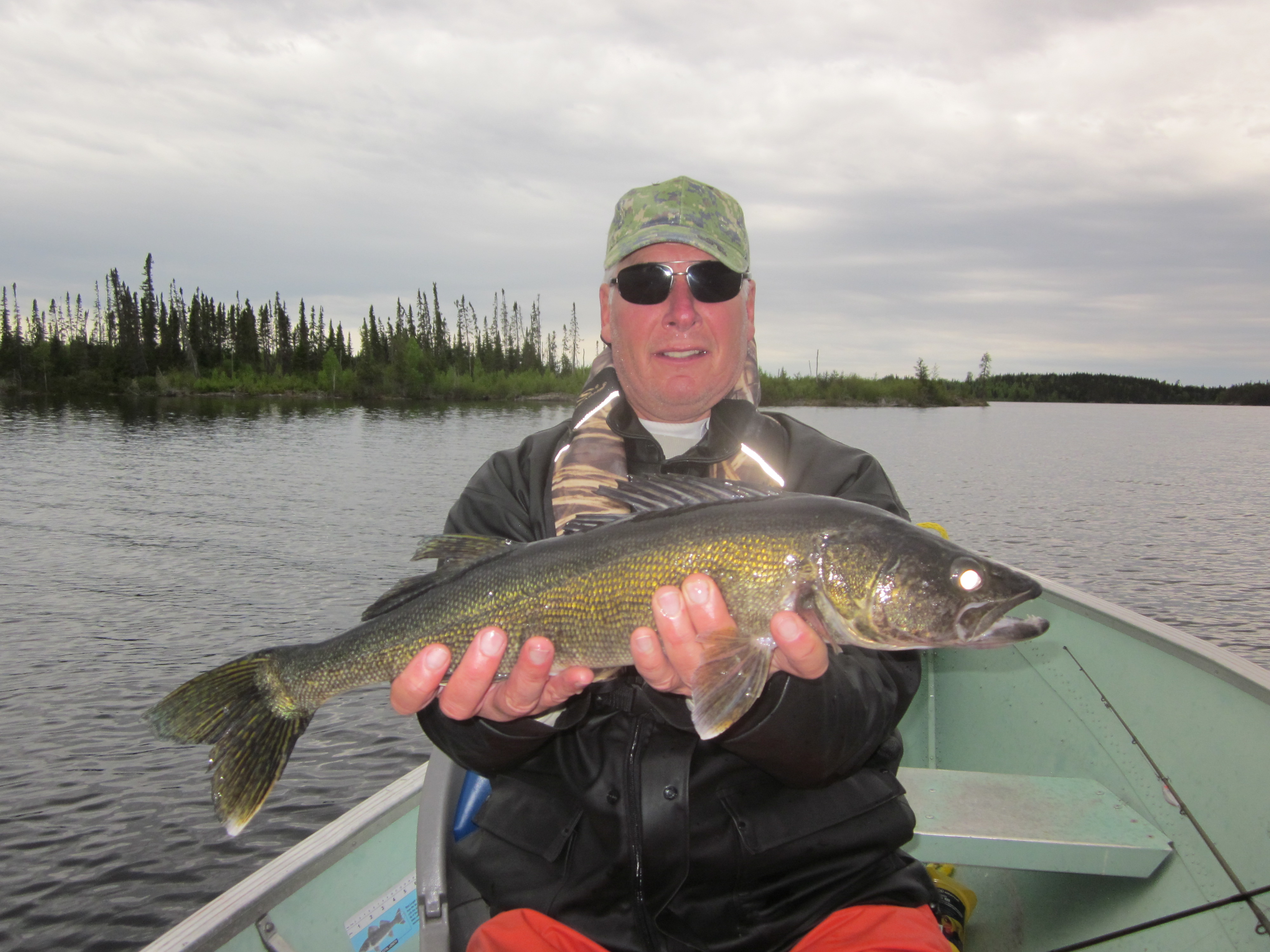 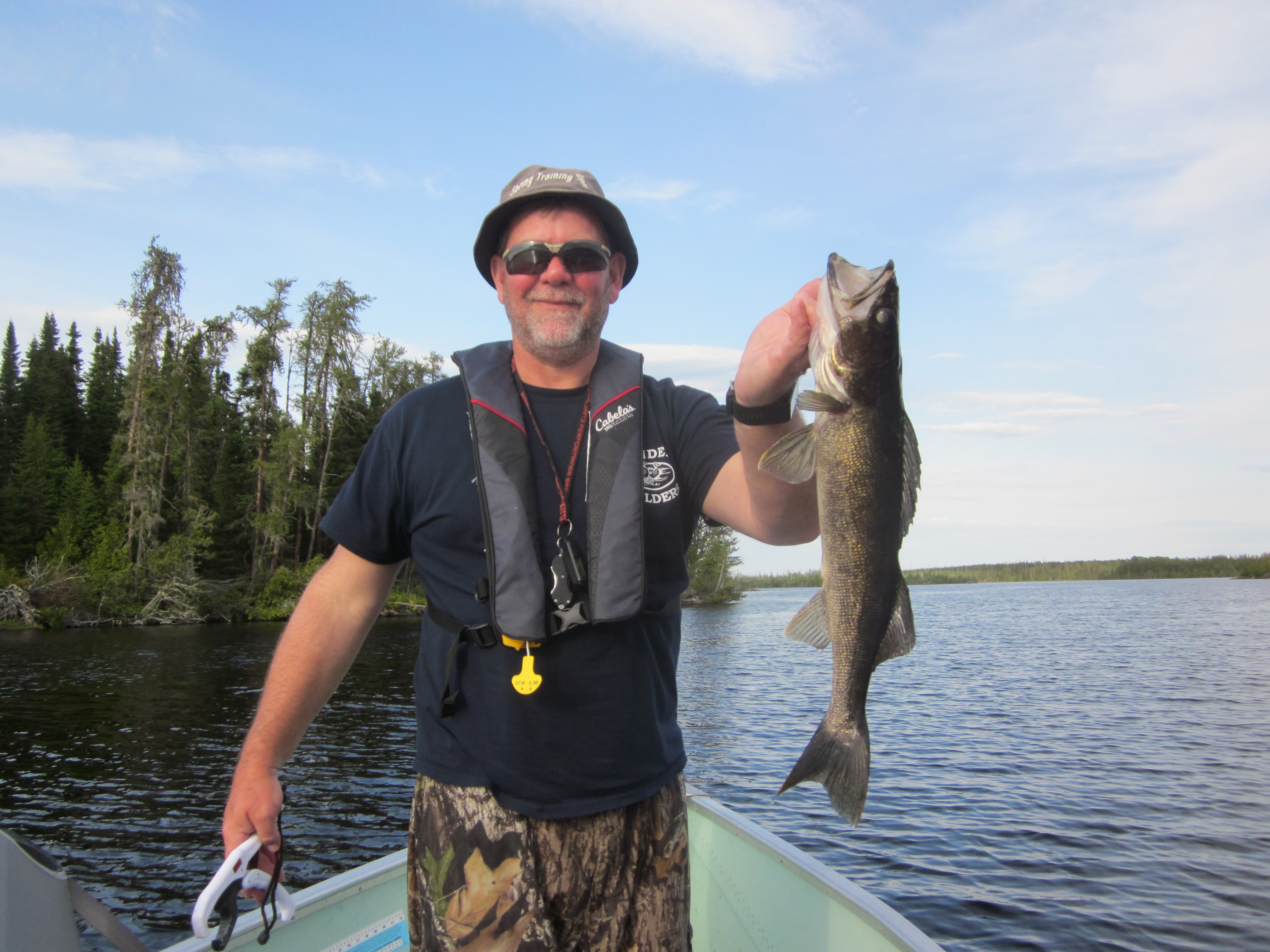 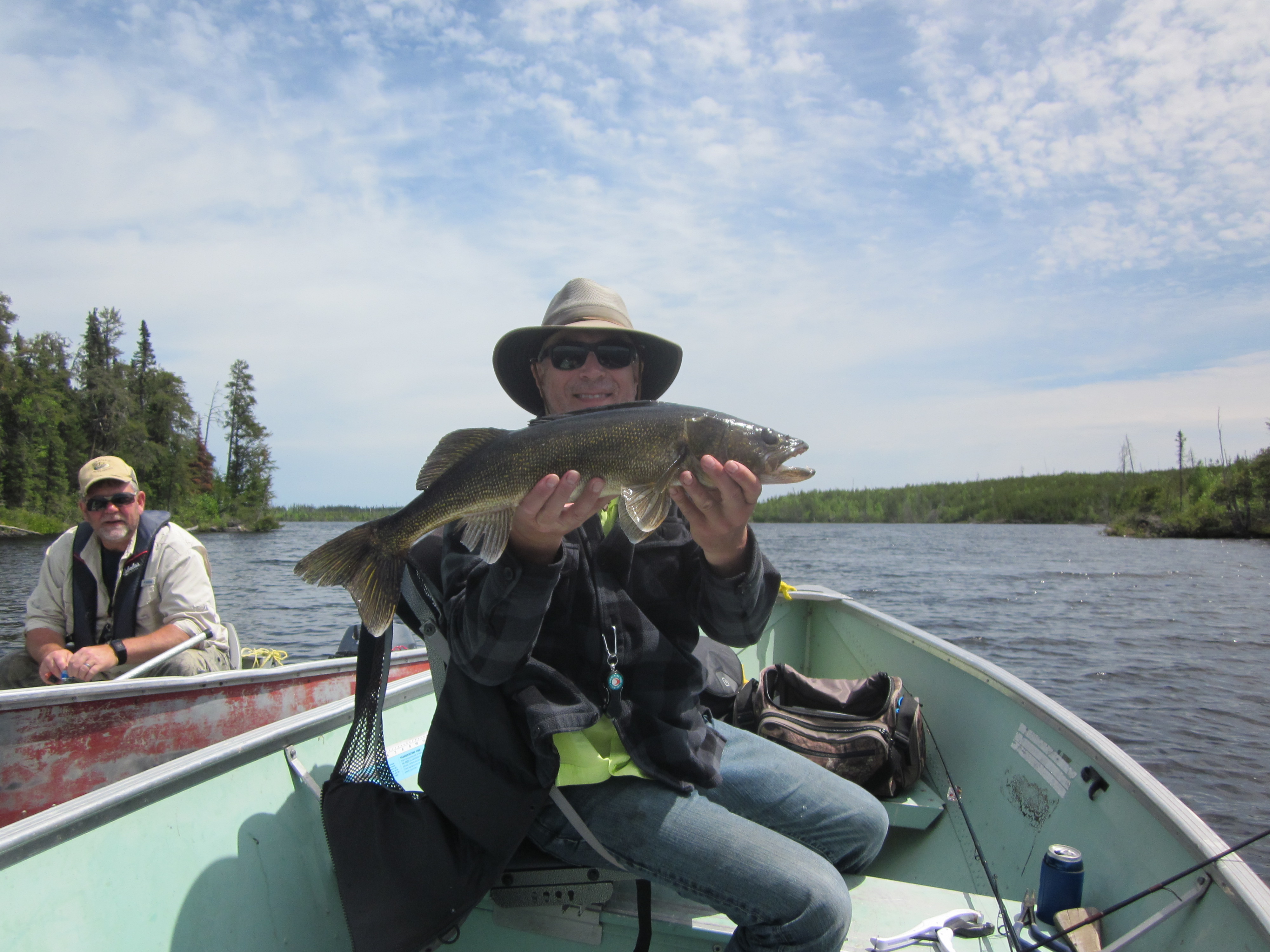