I spoke to one of our regular guests on Cedar Lake and he said this has been the best year of fishing for him so far! He said there were a few days this week where he was catching Walleye as fast as he could get his lure in the water. He found the Walleye in 7-8 feet of water on reefs, island points, and weedbeds. He mainly fished with a jig and a minnow. He had lots of Muskies chasing his Walleye and he caught more Walleye over 22 inches than previous years. As for Bass he caught more quality Bass and less quantity than usual. He even caught some Walleye when casting with crank baits for Bass. Our Muskie fishermen raised LOTS of Muskie this week. They seem to be VERY active right now. They said the Muskie weren’t too interested in biting on their lures, they would more just follow them to the boat and then swim away. Their biggest in the boat was 47 inches and they had a 41 incher as well. One guy in their group said he had one on the line and he reeled it in to the boat and swore it was upwards of 60 inches. He was not able to net it however and so it is the classic “one that got away”.

The mayflies hatched on the Indian Lake Chain this week. The fishing started out slow, but started to pick up towards the end of the week. The mayfly hatch really slowed down the Walleye fishing, but the Musky action was still good and the Bass fishing was good. The Walleyes are “reefing up” and the mayfly hatch is pretty well over. Here is a picture of a beautiful Muskie caught on the Chain this week: 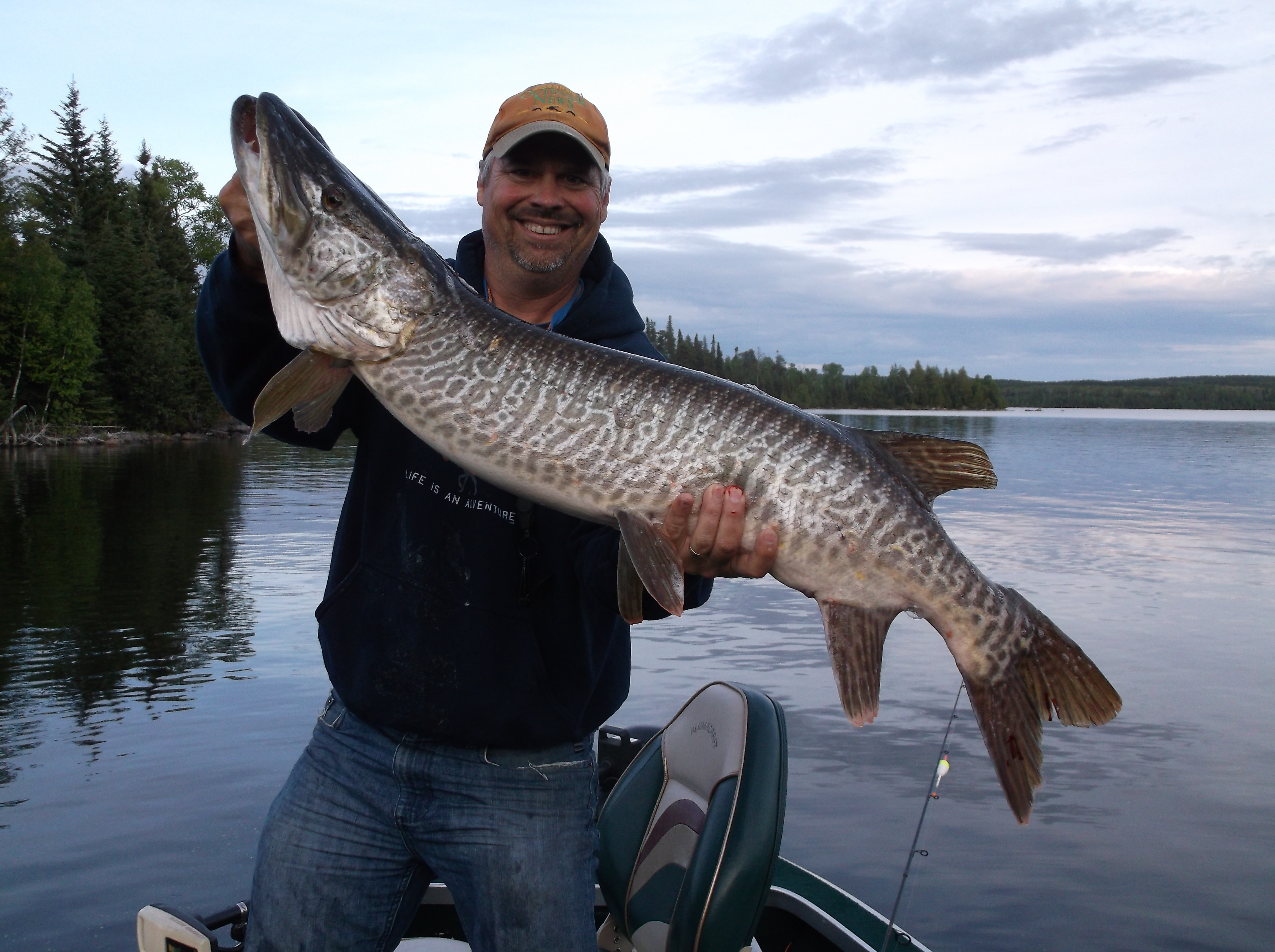 This group had a great week Walleye fishing. They caught 1,560 Walleye and 40 Northern (by accident). Their biggest Walleye was 29 inches, which was the biggest they caught on Fawcett Lake in 8 years! The biggest Northern they caught was 37 inches. They fished with minnows and night crawlers in 12 feet of water by the rivers and on humps. They had great weather, with only the occasional rain shower.

This group caught thousands of Walleyes using jigs with twister tails. Their largest Walleye was 25 inches. The best fishing was in areas of moving water. They caught hundreds of Northern using jigs and spoons. The Northern were in shallow, along shorelines and in moving water. They caught over 20 fish over 30” – four 37 inchers, one 38” and one 39”. They had great fishing at every “hot spot”. The Walleye were aggressive and plentiful. One in their group had 15 casts in a row with a Walleye every time. They saw the biggest and most aggressive Northern bite in 20 years. They didn’t get any in the boat that were over 40 inches, but they said that they are in there. They were all fat and healthy. They said that Kapikik was the best fishing of any lakes they’ve tried in the area in over 20 years. They had a fantastic week of weather and fishing and they enjoyed the cabin.

This group of 4 caught about 1,450 Walleye using jigs with minnows or twister tails. They fished in 8-10 feet and 15-20 feet of water. The largest Walleye was 25 inches, 5 lbs. The fishing was good all day long and best along shorelines and on reefs. They caught about 100 Northern, but no real big ones. The biggest was 28 inches.

This group of 2 saw the mayfly hatch at Upper Wapesi. Fishing was still good. They caught about 300 Walleye in 6-12 feet of water. The biggest was 25 inches. Any time of day was good the best spots were the weeds, shorelines, and the under water bar. They caught over 100 Northern and the biggest was 32 inches. They had thunderstorms the first 3 days, but then the weather was great. They had a wonderful time.

This group had only a 4-day stay. They caught plenty of Walleye to eat and the largest was 22 inches. They fished with jigs and minnows for Walleye and spoons and jerk baits for Northern. The largest Northern was 41 inches and 17.6 lbs.