Luckily, the May Fly hatch did not affect the fishing too much on Cedar Lake. The fishing stayed pretty consistent and we had all kinds of great reports from the guests. Some people really got into the Perch, while others targeted the Walleyes, and a few Muskies over 40-inches were caught and released as well. The dock fishing was also fantastic with lots of Walleye and Perch and one big Muskie! 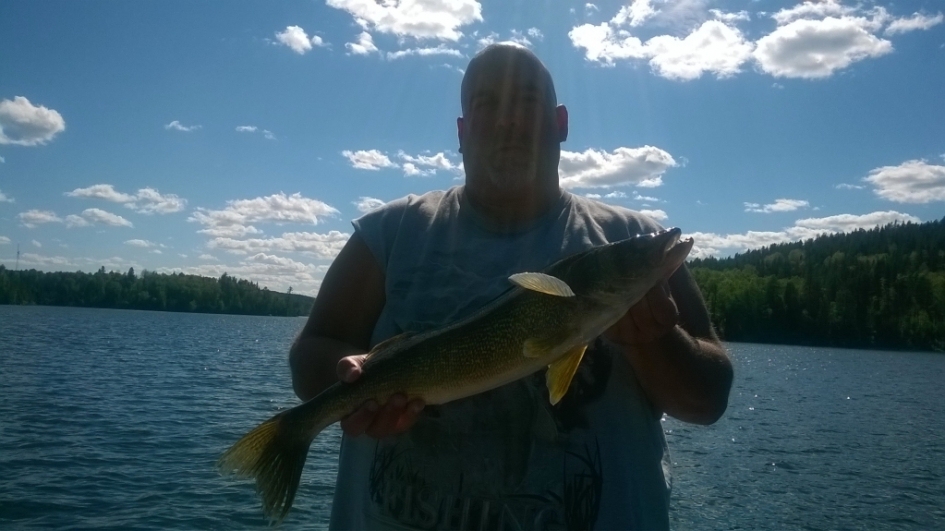 The fishing was very sporadic this week. Some days were good and some were bad. The ever-changing weather and crazy cold fronts have really made fishing a challenge! This has been a very interesting summer as far as weather goes. Hopefully things will straighten out now that we are into July. On a good note, the Trout fishing on Augite is hot! This always makes for a fun day portaging into that beautiful lake. Little Boulder is also hot for both Lake Trout and Walleye.

This group had fantastic fishing on Bertrand this week. They caught 2,431 fish!! Their biggest Northern was 43 inches and their biggest Walleye was 30 inches! The Walleye were in 4-8 feet of water along shorelines and islands. They fished using jigs with white grubs. The Northern were found in the same places and were caught using Storm Thundersticks and Rapalas. They had two 40-inch Pike, three 41-inch Pike, and three 43-inch Pike! They said this was by far their best fly out trip. They also saw a caribou and a black bear.

The fishing on Wright Lake was a little challenging and inconsistent this week. They had numerous rain storms come through and lots of wind. Their biggest Walleye was 24 inches and they fished using red and white spoons, Mepps with minnows, and silicone. For Northern they used spoons and minnows. Their biggest Northern was 48-inches!! The best places to fish were along shorelines, reefs, weedbeds, portages, inflows and outflows. The best fishing was in the evening.

This group has been to Fawcett many times and noted the fishing was slower than previous years. They did catch a 28-inch Walleye and a 34-inch Northern. They fished for Walleye with worms and crawler haulers (orange, silver, gold, yellow) along shorelines, reefs, and rivers. They Walleye were 15-25 feet deep and most active in the mornings and evenings. They used worm rigs and leeches for the Northern fishing and found them in deeper water along the shorelines as well.

These guys noted the fishing to be a bit slow due to the odd weather patterns, but they had a fantastic trip. They caught lots of Walleyes and the biggest was 24-inches. They used Tinsel Tail Jigs and Beetle Spins. They Walleye were mostly in the streams and rocky ledges in 3-10 feet of water. They also caught hundreds of Northern and the biggest was 41-inches. They used spinner baits and crank baits for Northern fishing and found them along shorelines, weedbeds, and in the inflows and outflows.

This group described the fishing on Kapikik to be EXCELLENT! They figured they caught a couple thousand fish and said they had a fantastic time. The fish were everywhere and were biting at any time of day. The biggest Northern was 38-inches and the biggest Walleye was 28-inches.