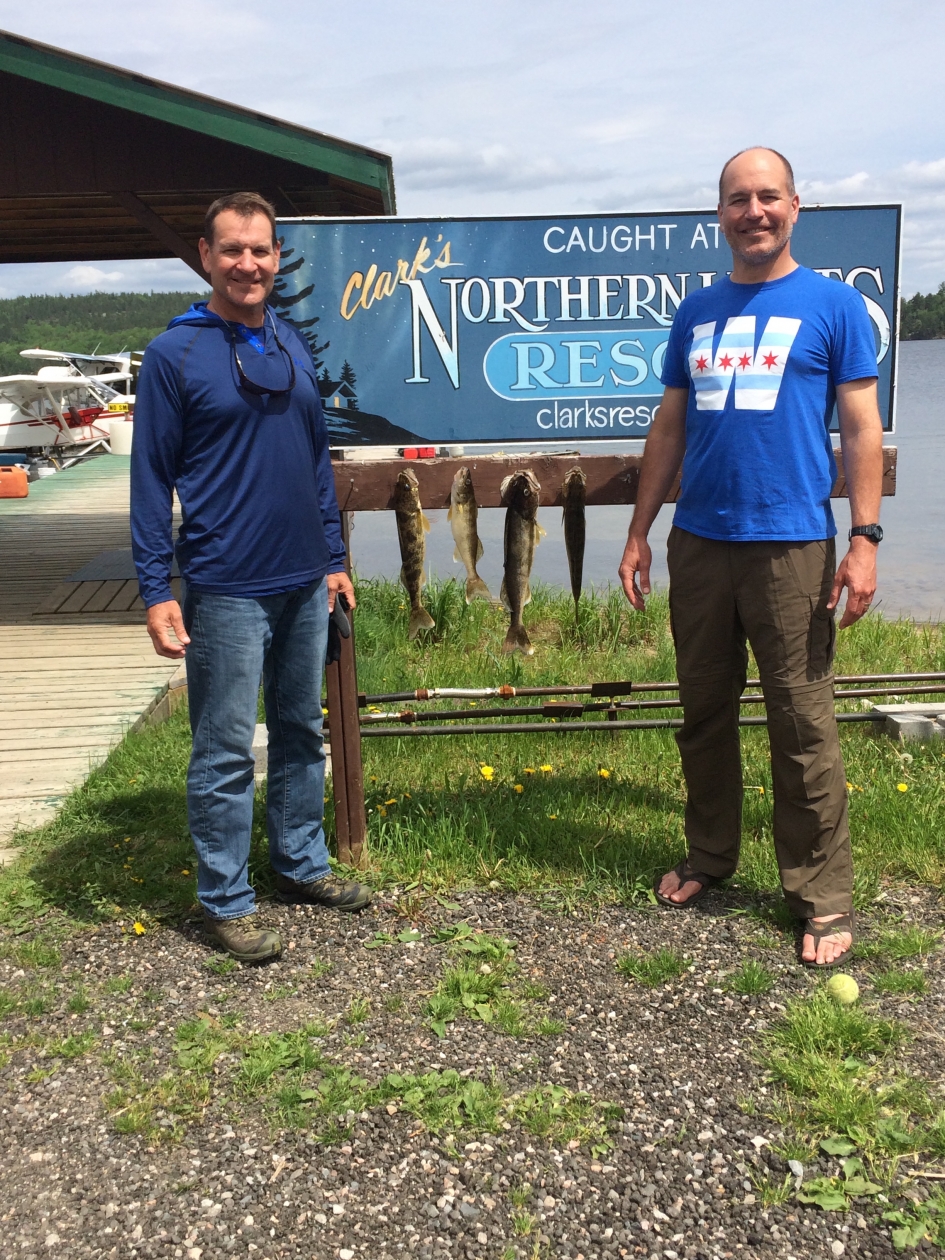 The fishing on the chain slowed down due to the beginning of the May fly hatch. There were still plenty caught for dinner. The Lake Trout were caught on Boulder, Augite, and Gordon Lake. They were al stuffed with many flies, but were still active! The Smallmouth were plentiful, but the Northern Pike were slower. There were some bigger Walleye caught and released on the Chain as well. The Muskies seem to be extremely active, so should be exciting once Muskie season opens!

This group has been at Wright Lake MANY times and they said the fishing was the best it’s been in years! They fished for Walleye with white lead head jigs with minnows and white twister tails. They also use 4” leaders. The Walleye were also biting on silver spoons or 2” floating rapalas. The biggest Northern was 34” and the biggest Walleye was 24”. They had a great trip and ate tons of fish.

The Walleye fishing was fantastic, even better than previous years! They did well with deap running plugs, minnows, and jigs. In some spots the Walleye were in 15’ of water and in others they were 8’ deep. The dock fishing was outstanding. The biggest Northern of the week was caught of the dock using a jig and minnow. The biggest Walleye caught was 24”.

The hot spots on Austin were mainly the points and the rock shelf out in front of the cabin. The backside of the main island was good as well. They caught lots of Walleye in the 18-20” range. They fished with jigs, plastics, and minnows. They had to portage into other lakes for the bigger fish. They said the Walleye were stacked in the outlet flowing out of Austin. The biggest Northern caught was 39”. 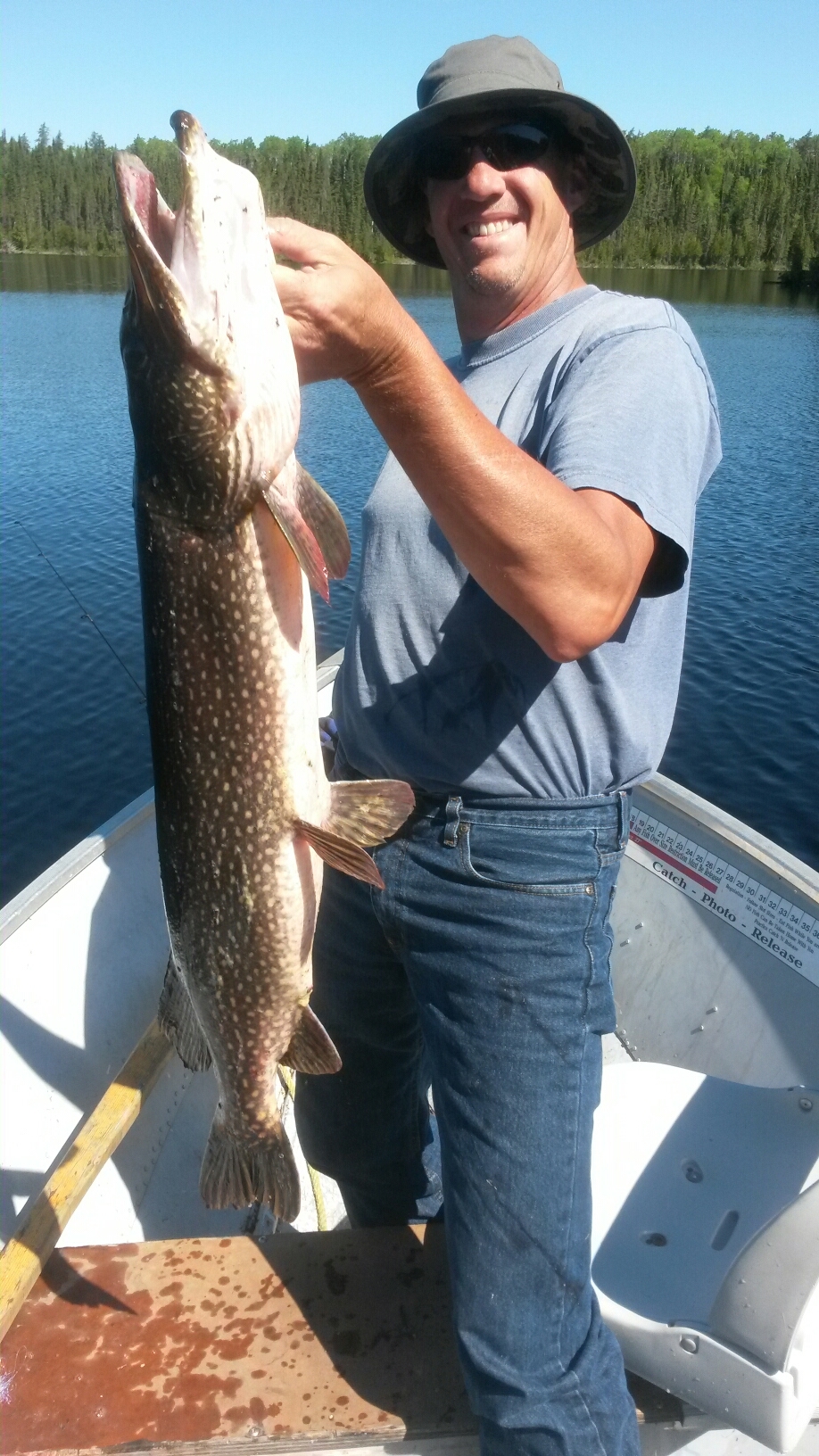 This group described the fishing on Kapikik as AWESOME! They caught Walleyes all over the lake, but they were really stacked up wherever there was current. They mainly fished with jigs and minnows, but did catch fair numbers with various Gulp and other plastic baits. They caught fish in 3-12’ of water and even had great fishing right off the dock. They ended up with 2 Walleyes that were 25” and several others in the 22-24” range. They said even the 17-21” Walleye were some of the thickest/heaviest Walleye they have ever caught in all their trips to Canada. They ended up with 12 Northern over 30” and the biggest was 39”. The Northerns were caught on various spoons and some on suckers. They saw two bears, the caribou (at the cabin!), and mink, beaver, and lots of eagles. 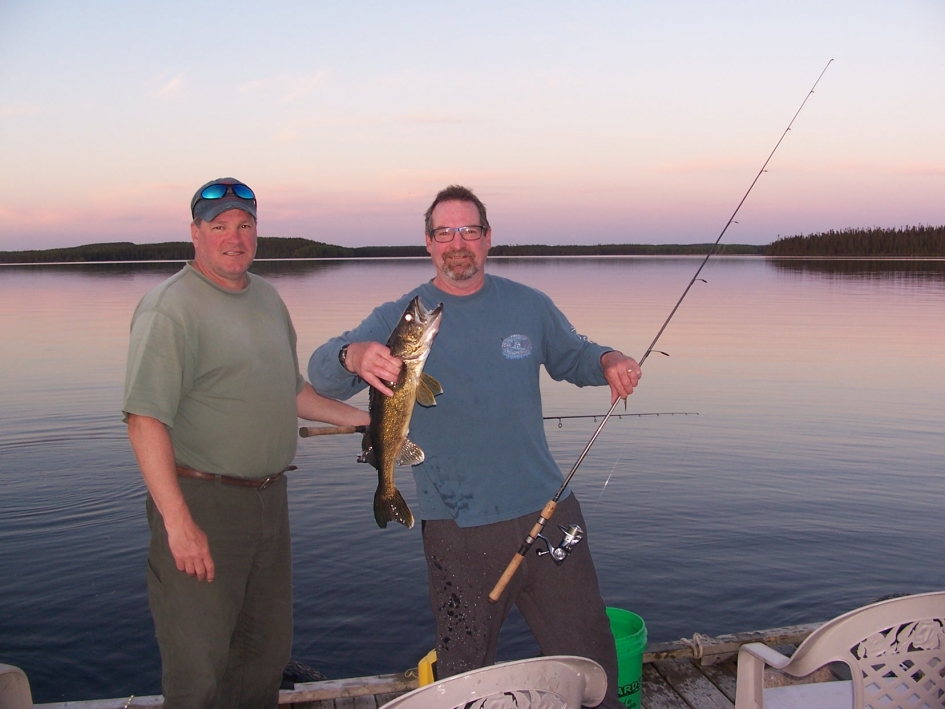 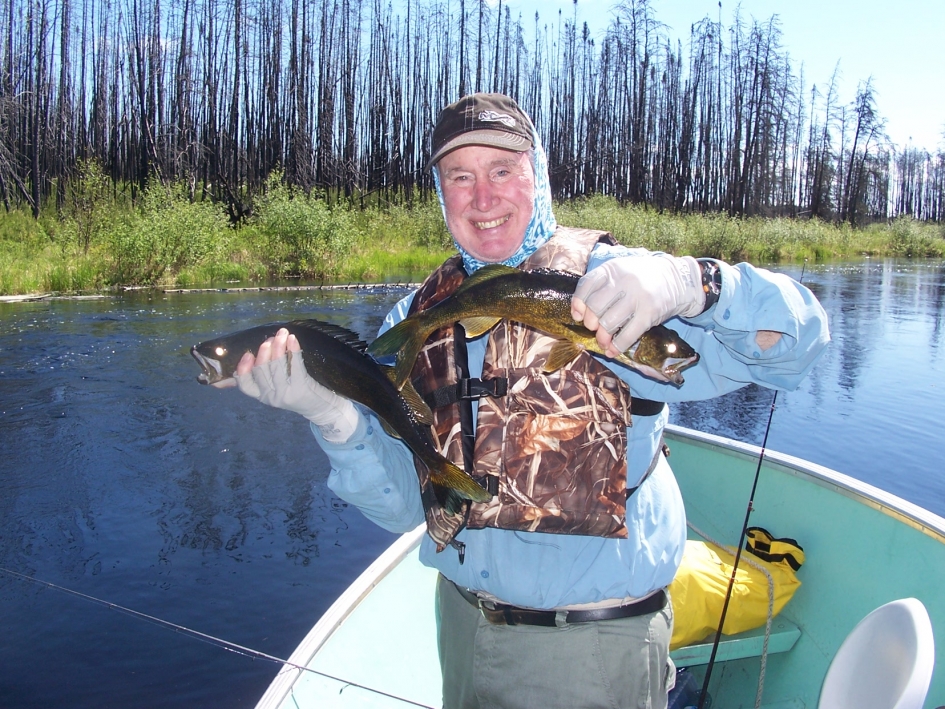 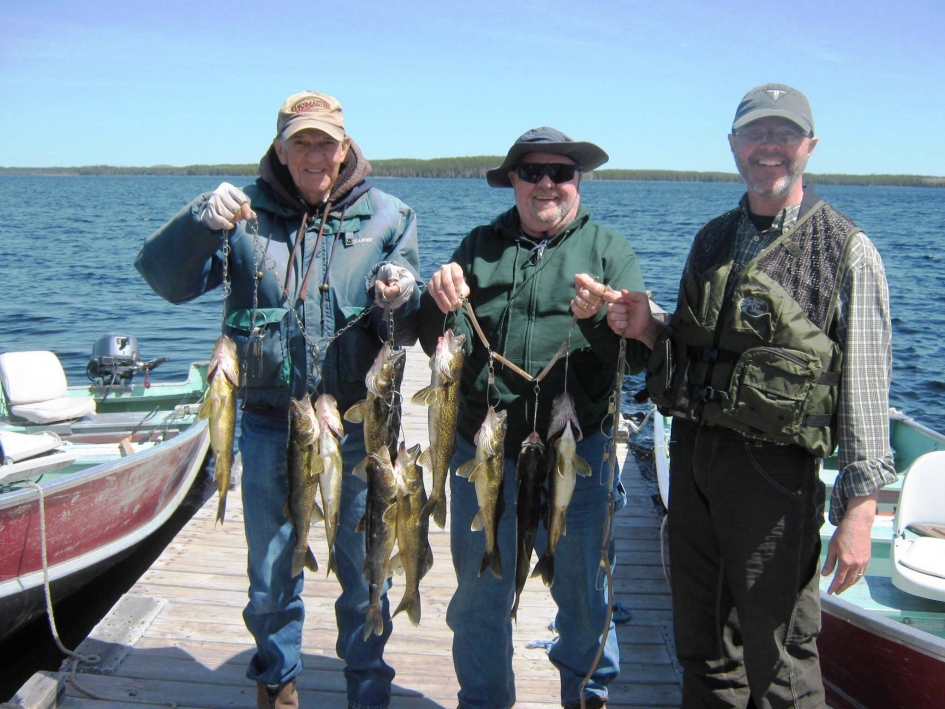 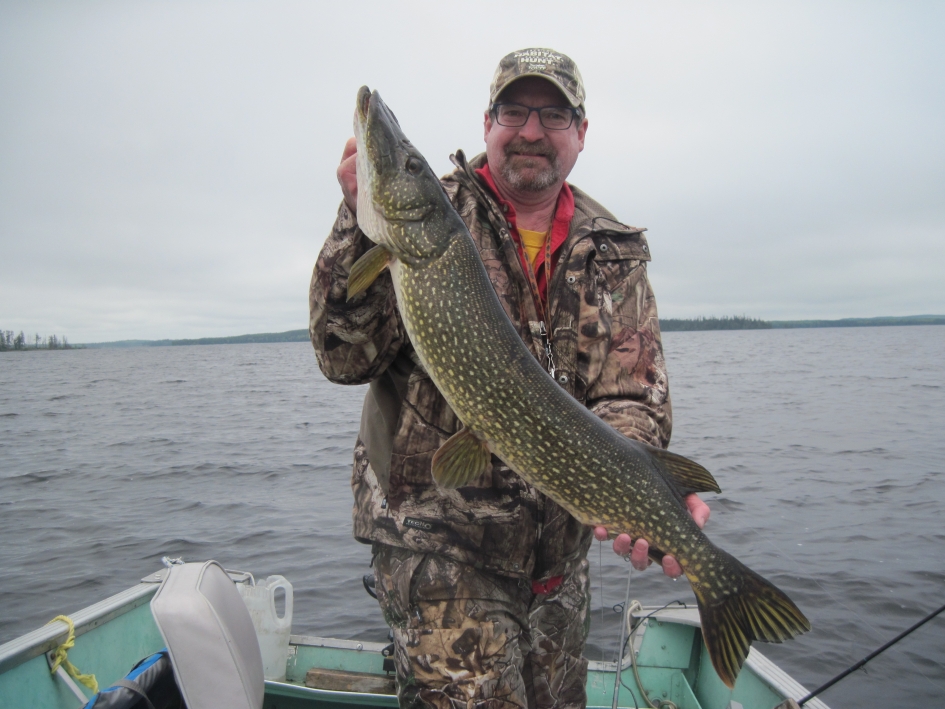 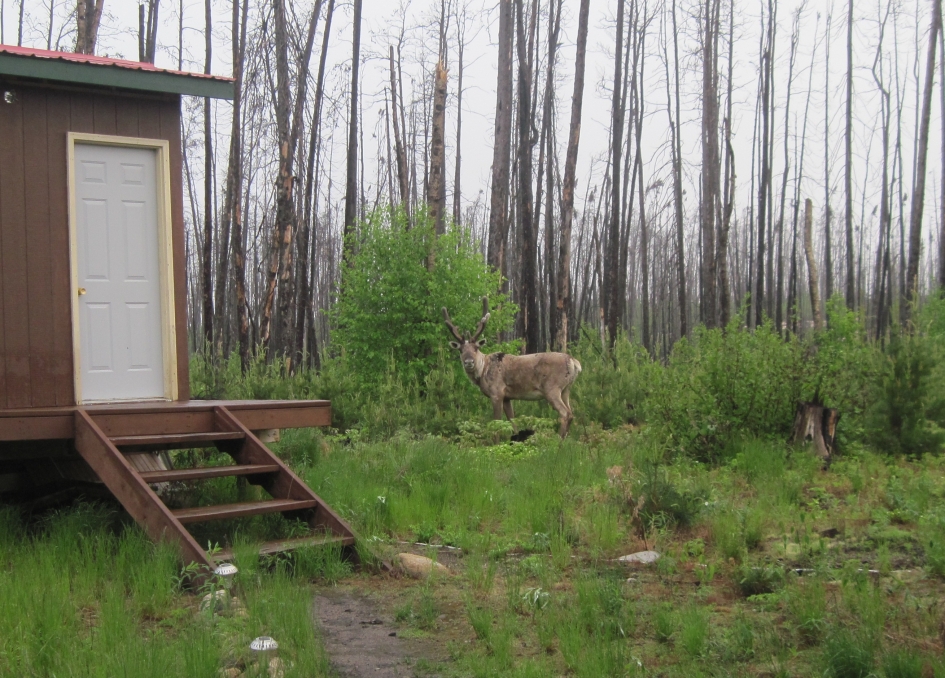 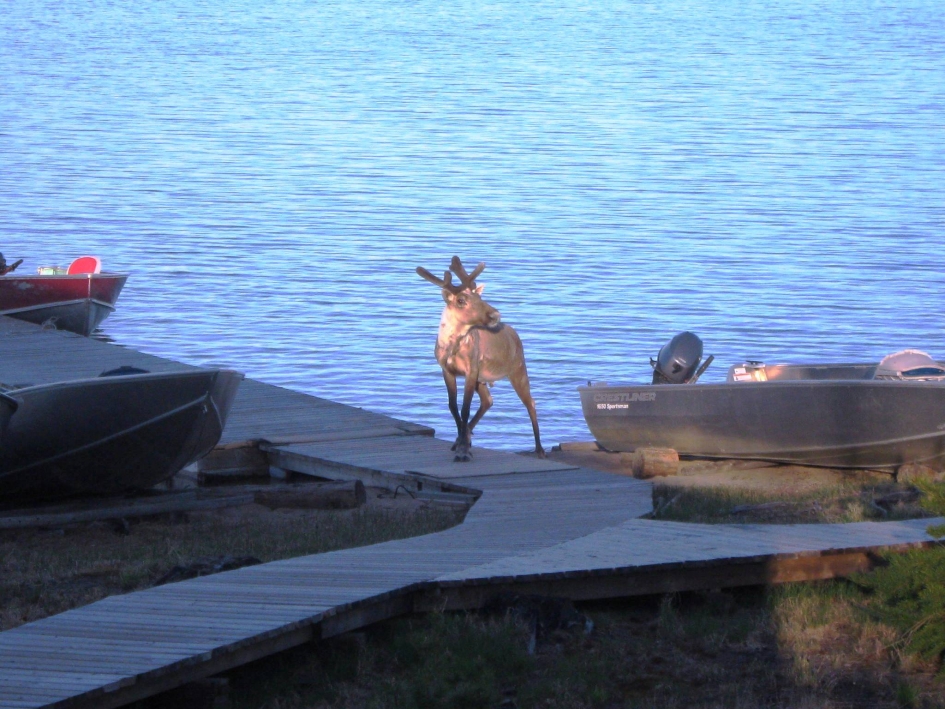 These guys caught over 1,000 Walleye with the biggest being 24.5”. They fished with jigs and minnows. The best spots were the mouth, inlet, narrows, and points. The Walleye were in 4-8’ of water and best time of day was midday – evening. They also caught lots of Northern with the biggest being 38 inches. The Northern were biting in the same places as Walleye and on spoons.

These two caught 873 Walleye during their stay at Pusher Lake! The biggest was 24.5 inches. They fished with 1/8 oz. jigs and minnows or white twister tails. #12 gold and black husky jerk was also good and same with #5 shad rap (bluegill colour). At the beginning of the week the Walleye were in 4-8’ of water and moved to 6-12’ later in the week. The biggest Northern was 38 inches. The best lures for Northern were #12 gold and black husky jerks and ¾ oz. gold Johnson silver minnows. They Walleye and Northern were both along shorelines, reefs, and weedbeds. The best spot for Northern was in 3-6’ of water near weeds or 6’ near rocks. They described the fishing as amazing and even got to see a moose!

These guys caught 950-1000 Walleye on Upper this week. The biggest Walleye was 25 inches. They caught over 50 Northern and the biggest was 36 inches. For Walleye they used 1/8 oz. chartreuse or white jigs with minnows. The #5 shadrap (black and white) or the #5 (fire tiger) were also good lures. The Walleye were in 4-8’ of water on shorelines and reefs. The best time of day was early morning or evening, unless it was overcast, then the fishing was good all day. Northerns were found in the same places and depths and the best lures were black single spins and jointed rapalas. They had a great time, saw moose and eagles, and said they caught lots of Walleye over 20 inches.

They caught too many Walleye to count… the biggest was 26 inches! The best bait was jigs and minnows and they found Walleye all over the lake all day long! The Walleye were in 3-8 feet of water. They did great Northern fishing as well. They caught 31 Northern over 30 inches and 15 of them were over 38 inches!! Their biggest Northern was 43 inches!! The best lures were spoons and spinners. The Northern were along the shorelines in 2-10 feet of water and the best time of day was anytime before noon.

This group liked how easy the lake was to fish. They caught all the Walleye they could ever want. The biggest was 20.5 inches and the best bait was jigs and minnows. The best spots to fish were those that were marked on the map given at check-in. They Walleye were in 7-10 feet of water and were biting all day long. They did fish for Northern, but caught a few while Walleye fishing.

These guys caught about 430 Walleye with the biggest being 25 inches. They fished with jigs and minnows and the best spots were along the shorelines in 3-6 feet of water. The mornings were not very productive, but afternoons and evenings were good. They caught some Northern while Walleye fishing as well, but nothing over 30 inches. They found that using bobbers was helpful to avoid snagging jigs on the rocky bottom.

This group caught 2,174 Walleye and the biggest was 24.5 inches. The best baits were 1/8 – 1/4 oz jigs and the FREE minnows! The best spots were the points along the main river anywhere from 8-20 feet of water. The best bites were during early morning and late evening. They caught 628 Northern and the biggest was 42 inches! The best lures were silver or orange crocks. They basically found Northern all over the lake and they were shallow. Wind blown bays were best.

They caught hundredes of Walleyes PER DAY and dozens of Northern per day! They caught several Walleye in the 22-inch range and their biggest Northern was 35 inches. Best lures for Walleye were minnows, spoons, little joes, and jigs. The Northerns hit on everything. The Walleye were in the drop-offs, on points, and the rivers flowing into the lake. They ranged from depths of 4 feet to 20 feet. The Northern were in similar area.