This trio did not fish hard by any means, but they still caught over 700 Walleye! The biggest on Cook Lake was 17 inches and the biggest on Bumpy was 18.5 inches. They were not fishing for Northern, but boated a 43 incher! They fished mainly with jigs and minnows and also Sassy Shads. They said the fishing was best in afternoon, but that is because they didn’t get out in a boat until after lunch! This group had a good time and really enjoyed Cook Lake Outpost.

This group caught 486 Walleye and about 500 Northern. The biggest Walleye was 24 inches and the biggest Northern was 39 inches. For Walleye the best bait was jigs with minnows or plastics. The best lures for Northern were spinner baits and Rapalas. The fish were 3-10 feet deep and mostly found along shorelines and islands, and Northerns in the bays. They said the Blue Walleyes were beautiful! 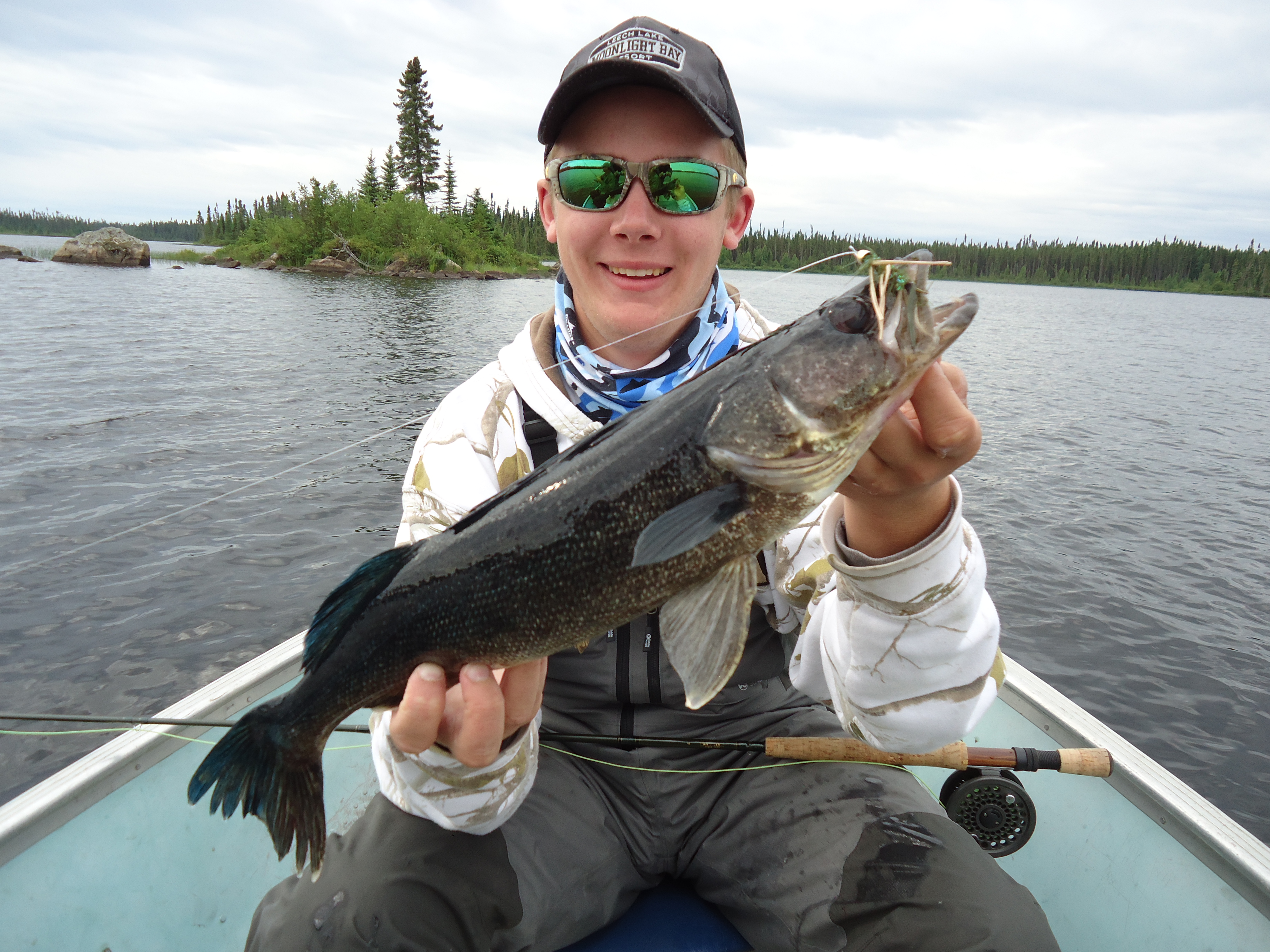 These two had a blast on Snelgrove Lake! You can watch a video of their trip on our Facebook page. They caught over 600 Walleye, many in the 17-22-inch range and the biggest was 26 inches. The best bait for Walleye was lead head jigs and minnows and the best colour jig was whichever one you could tie on the fastest! The fished along the shoreline of the big island, the small island to the West of the big island, and they also found a good reef a few hundred yards North of the small island. The fish were 8-10 feet deep in the evening and 10-14 feet deep in the morning. They said the bite was strong and fast during the evening as the Walleyes moved into the shallows. The Walleye are stout and strong and they fight like each one is a trophy! They liked Snelgrove because it’s a big enough lake with lots of areas to catch fish no matter which way the wind is blowing. They also caught blue Walleyes and saw a caribou! They said that from the second they arrived to the time they left, the crew at Clark’s was outstanding and made us feel like they were a part of their family! So nice! 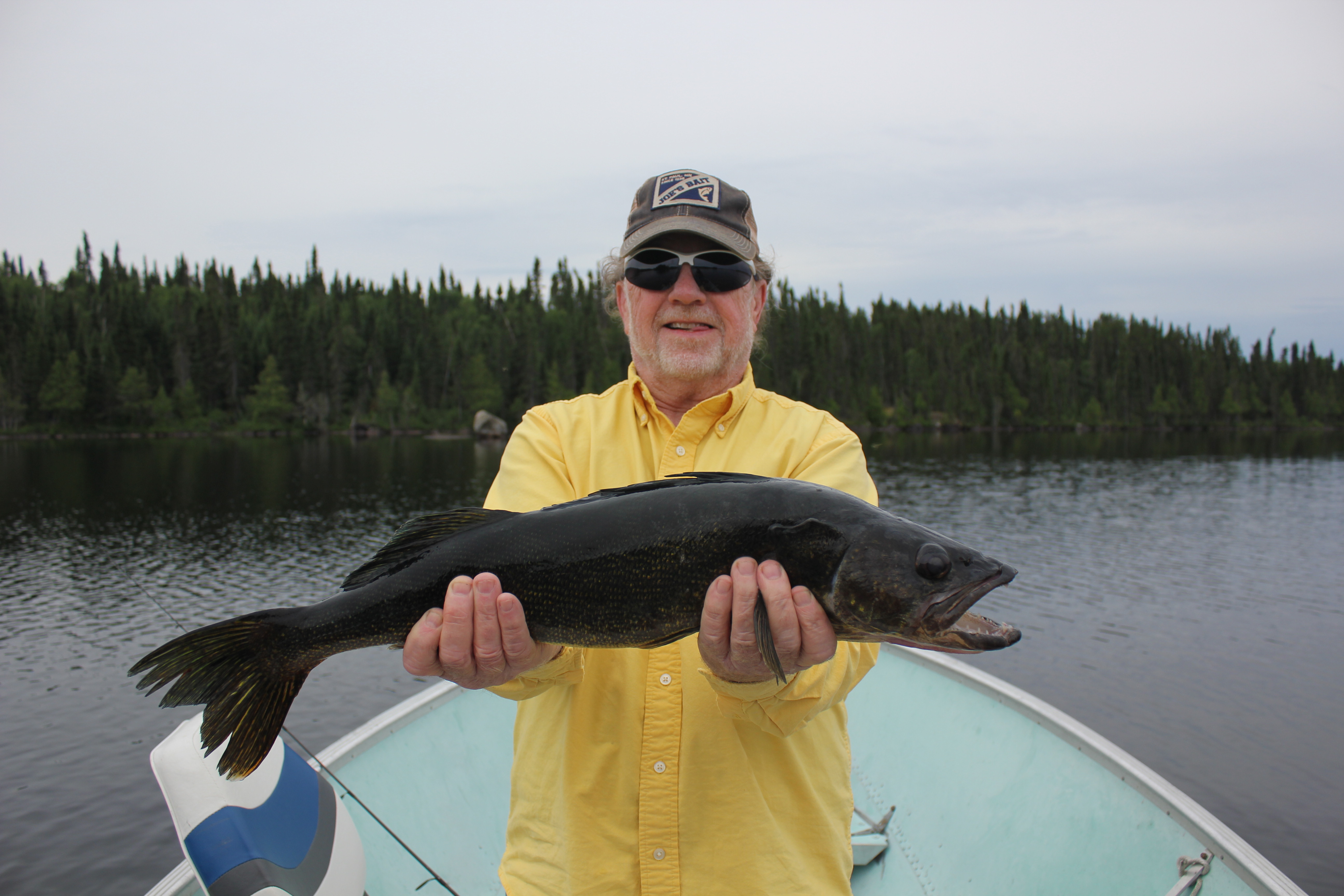 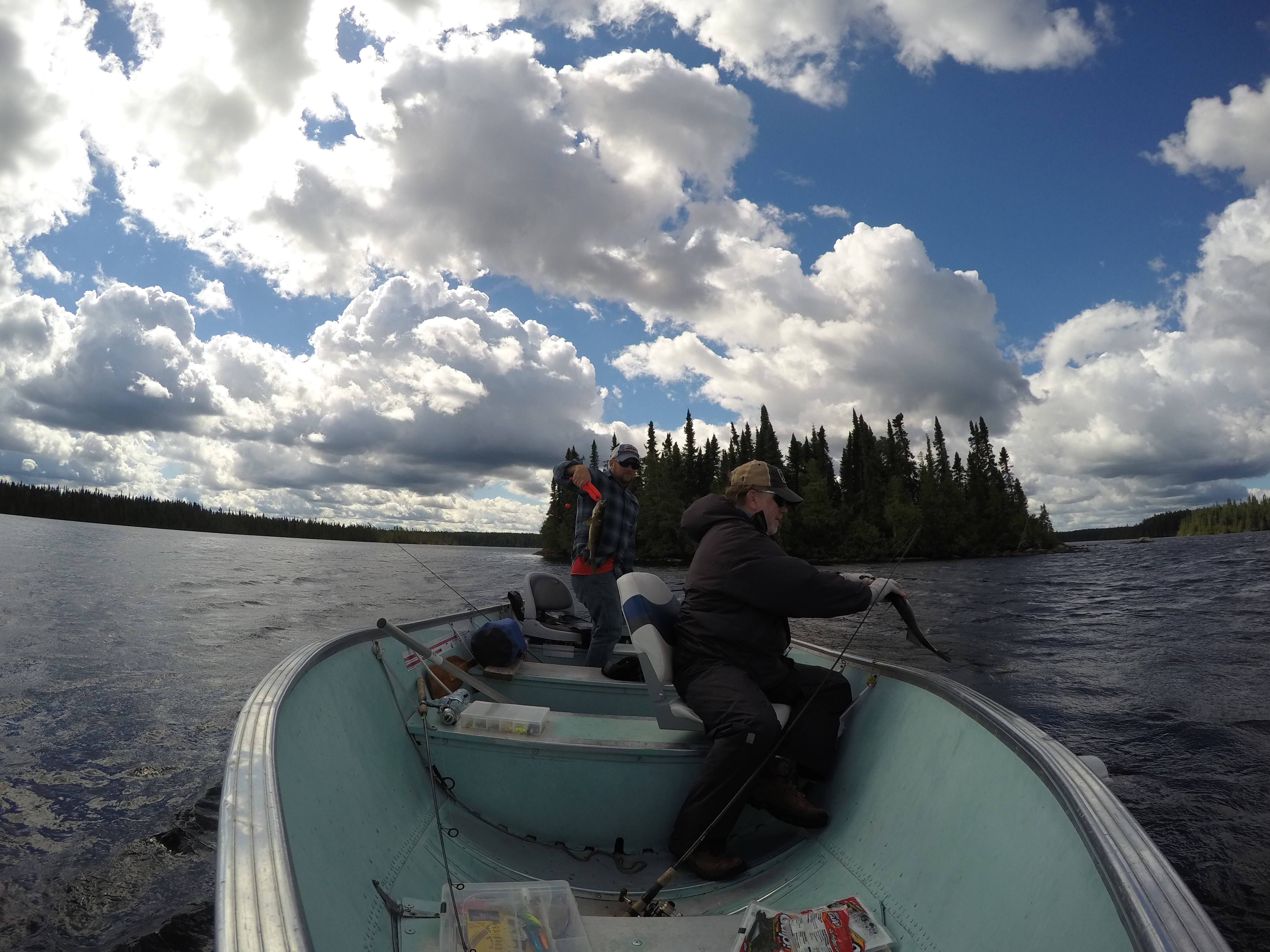 These two had a great time on Una. They caught as many Walleye as they could have ever wanted with lots in the 15-18-inch range. Their biggest Walleye was 22 inches long. They had very good luck with jigs and minnows and crankbaits. They did not do as well with Northern as they had hoped… they were casting Doctor Spoons and Spinner baits, but they said the Walleye fishing made up for it! The best fishing spots were shallow points with smaller rocks and the fish were in 2-6 feet of water. They didn’t try the portage lake (Currie) because it was too hard to leave the Walleye fishing on Una! They saw moose, bald eagles, a fisher, and a one-eyed squirrel!

This family who has been to Wright many times had a great trip catching hundreds of Walleye and lots of Northern! Their biggest Walleye was 26 inches and they had two Northerns that were 35! They had the best luck fishing Walleye with jigs and minnows and the best lure for Northern was the 5 of Diamonds. The found most fish in 8 feet of water around islands and reefs.

These folks were new to Otatakan Lake, but had no issue finding the fish! They caught over 1,000 Walleye with the biggest being a 29-inch Blue Walleye!!  They caught Walleye anywhere from 6-10 feet of water and then deeper towards the end of the week. They did well using 2” black twister tails with nightcrawlers and also with jigs and minnows. Jigs worked 3 times better than spinners, especially vertical jigging.  The best Walleye spots were reefs, shorelines on the East end, and points. The fish bit all day long… sounded like a great trip! 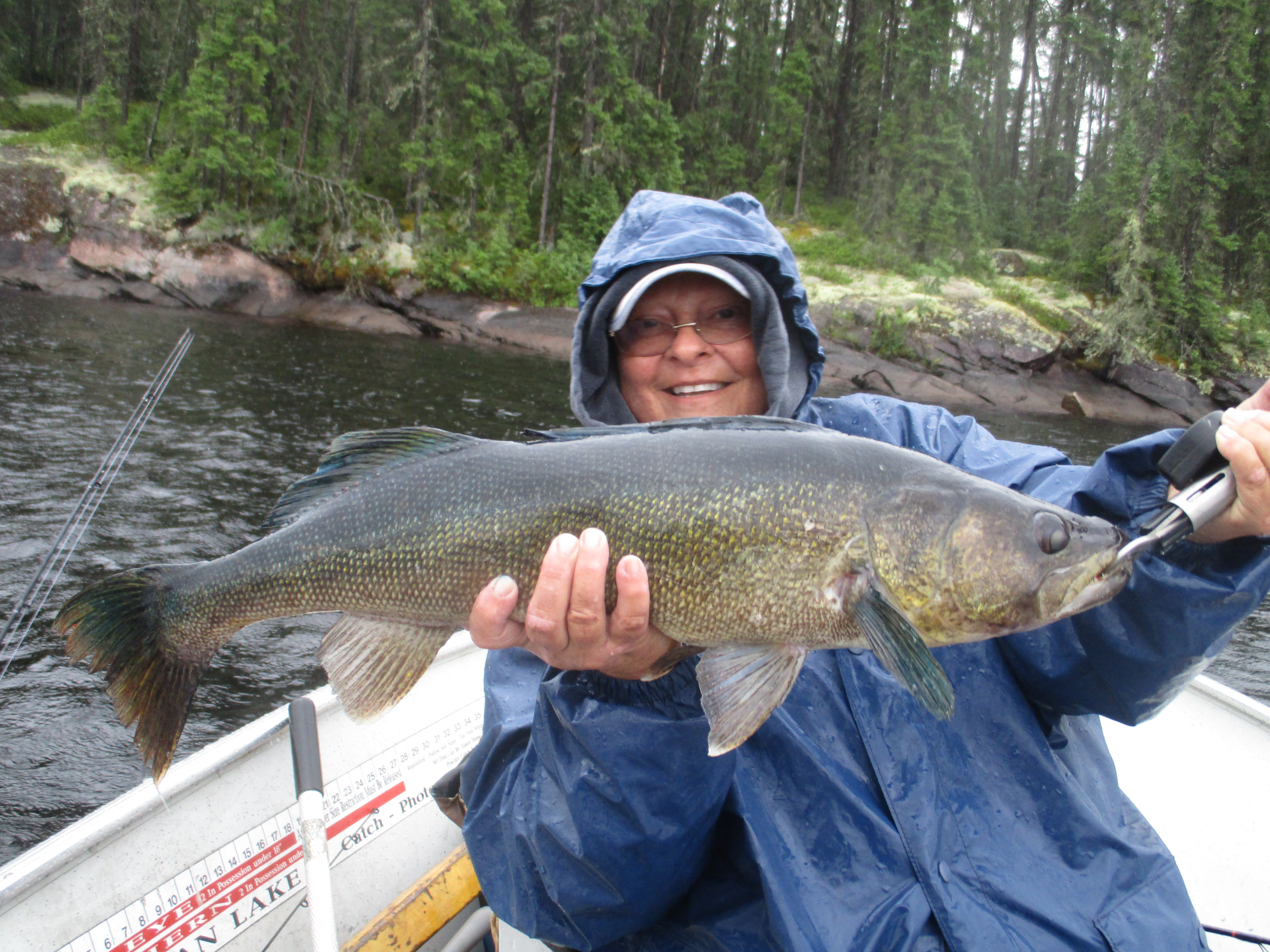 The fish’s bellies were full of May flies, which is never a good thing for our fisherpeople! The Walleye fishing was slow… They did okay using yellow twister tails on jig heads and the biggest Walleye caught was 20 inches. They were about 6 feet deep and the best time of day was in the mornings.  They caught a few Northern with the biggest being 30 inches, also caught on twister tails. They really enjoyed the cabin and the grounds and the boats were great… last comment was “damn may flies”. What can you do!

Fishing was slower on Kam as well… seems like the lakes further North got hit the hardest with May flies. They managed to catch a few hundred Walleyes with the biggest being 24 inches. They fished off the dock a lot due to high winds! The best bait was jigs and minnows. Someone in the group caught a 40-inch Northern! They liked the cabin a lot and had a nice stay. 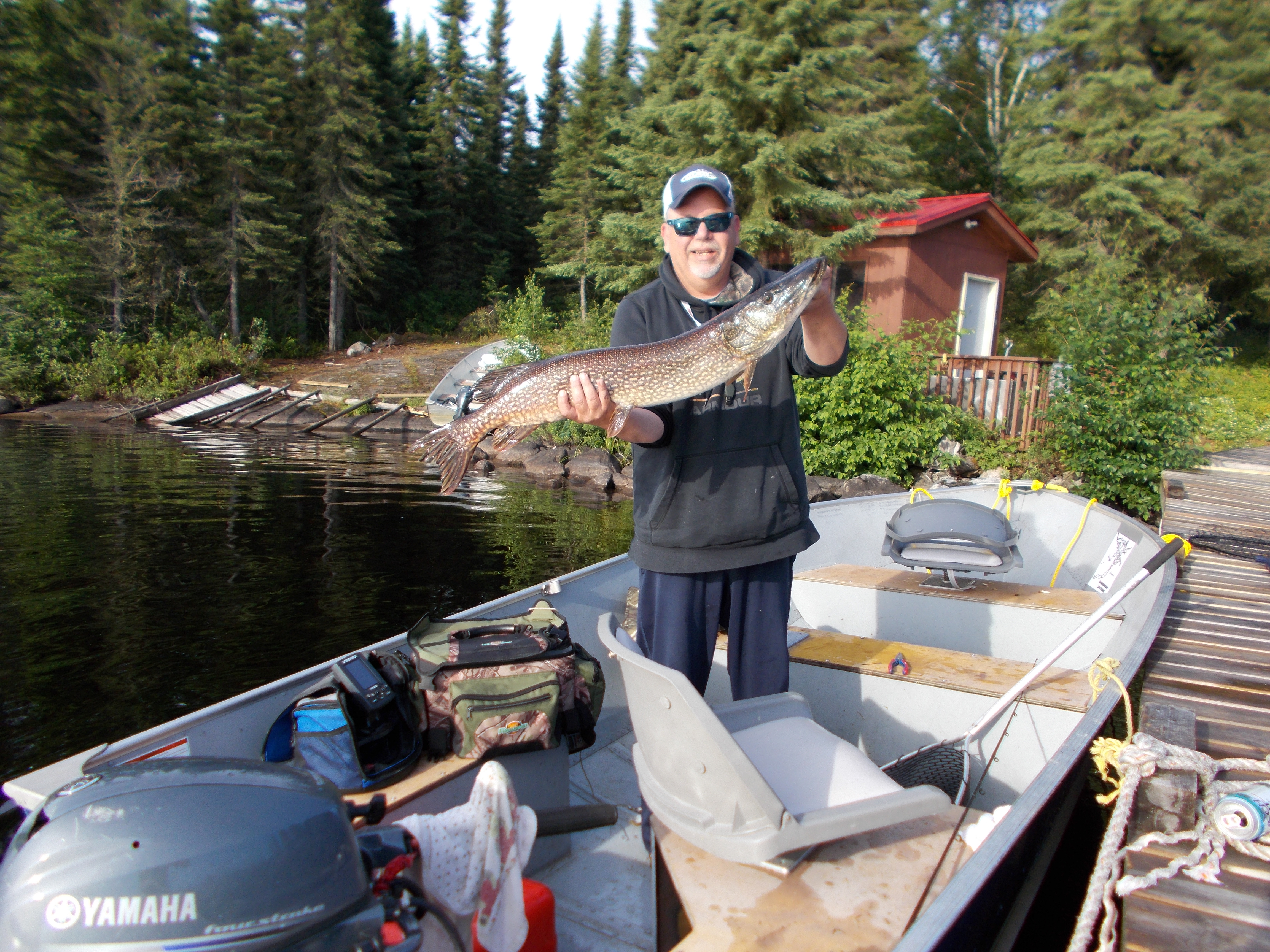 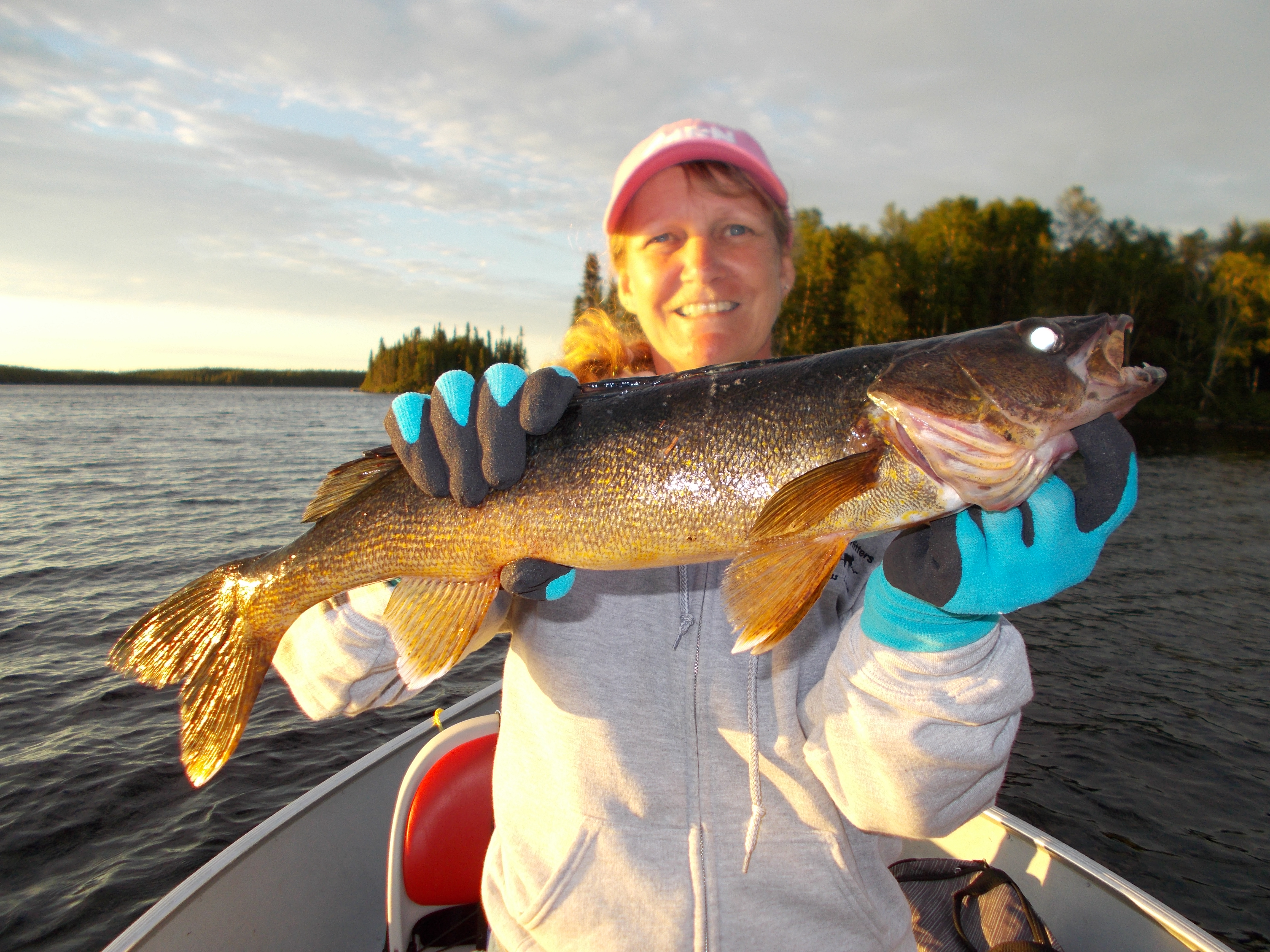 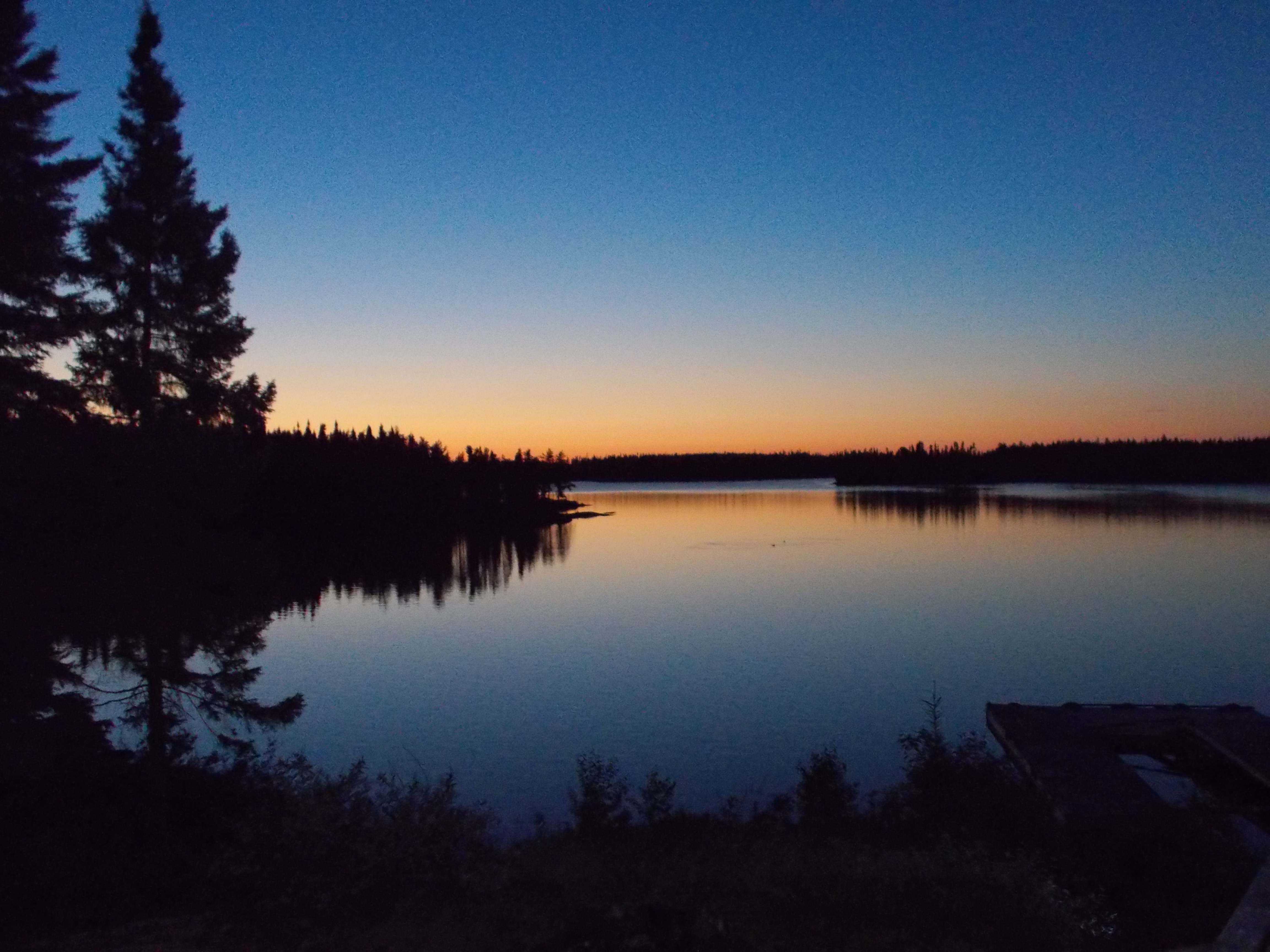 Fishing was pretty hot on Kapikik… these 4 caught LOTS of Walleye and LOTS of Northern and some nice-sized ones too! The biggest Walleye was 28 inches and the biggest Northern was 40 inches. The best bait for Walleye was jigs and minnows and the best for Northern were Mepps Spinners. The best fishing was right near the cabin in the S-curve and the inflow/outflow behind the island.

Aside from the high winds, these guys had a great time fishing Fawcett Lake. One guy fished off the shore below the rapids almost the entire week! You can go wrong with fishing Fawcett Lake… even though it’s a huge body of water, the best fishing is right by the cabin in that river! They used jigs and tails, minnows, worms, and also rattle traps (Fire Tiger). Northerns were caught on Rattle traps and Dare Devils. The depth of the fish really varied from 4-14 feet, but the bite was steady all day long. Shorelines, reefs, and rapids were the hotspots.