The Walleye fishing was a bit slower than usual due to the cold front that we experienced last week. There were still plenty caught and nobody went hungry! The weather has improved and the Walleye action is back to where it should be. Crank baits are turning on nicely now. The guests did really well on Cobble and of course, of the dock at K.C.’s. The Bass are getting active, there were several in the 18-21-inch range caught and released. 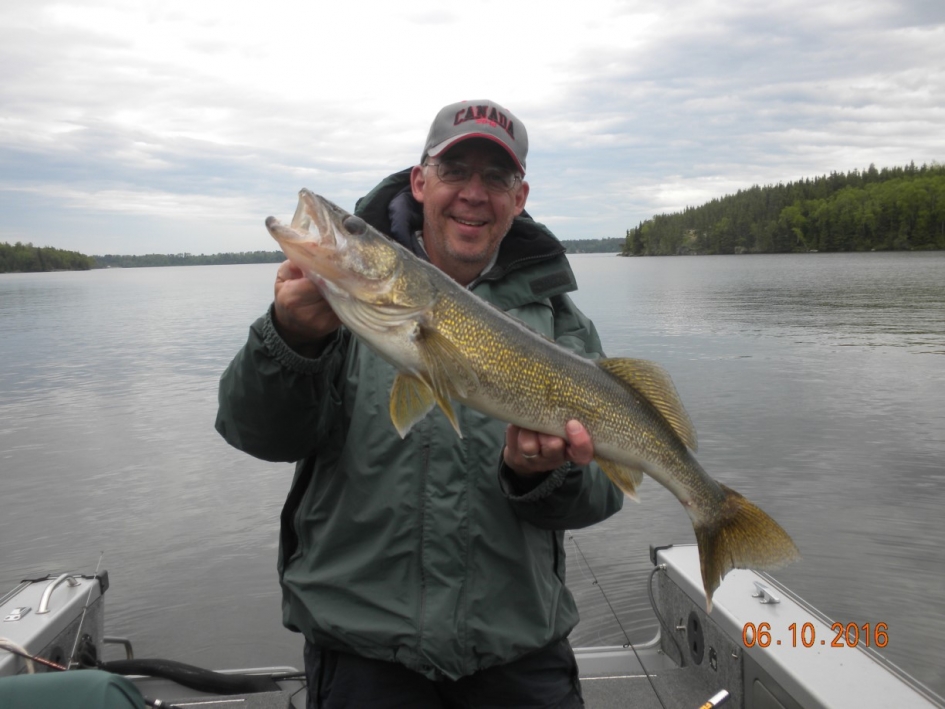 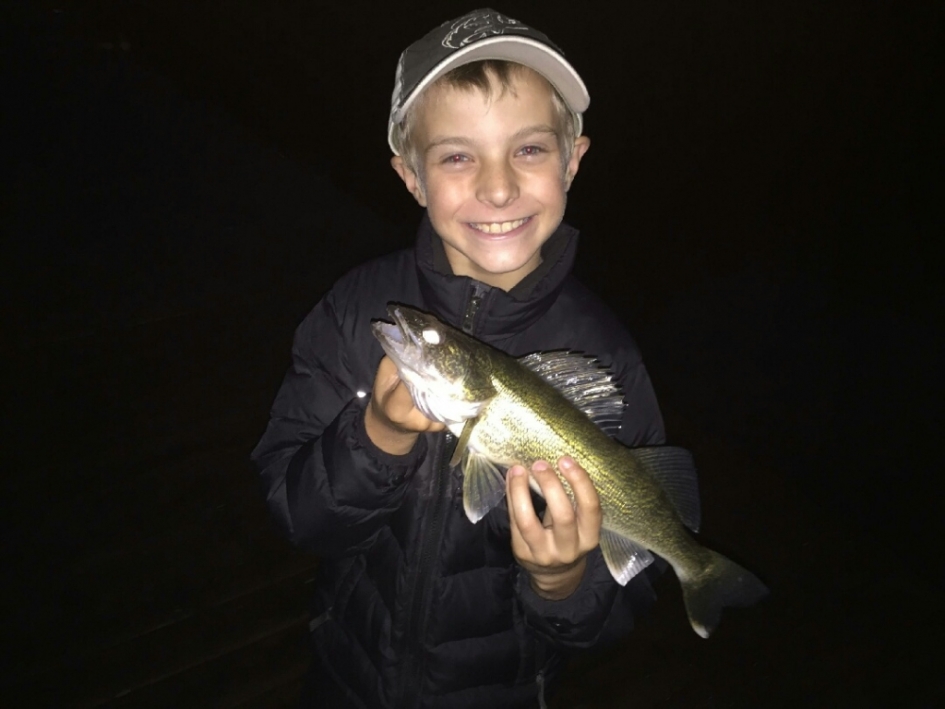 We've had some warmer days bringing the water temperature up and the weeds are starting to grow. The fishing still seemed better on the East end of the lake, which is a little bit unusual. Typically our groups don't travel very far down the lake to find fish. The fish were still found shallow, but with this warm weather coming they will soon move down to the rocks. The Walleye bite was hot some days and a little slower others. It could have had something to do with our extremely inconsistent weather! The Crappie spawn is now over and they will be moving deeper as well. The Bass and Northern are VERY active along the shorelines so that's added some excitement for the guests.

This group had awesome Walleye fishing topping out with a 28-inch Walleye. Their only challenge was the constantly changing weather… it seemed as though it couldn’t make up its mind! They fished for Walleye in 6-10 feet of water and the best spots were the inlets. They said the best bait was jigs and minnows… orange in the morning and green in the afternoon. This group also saw 5 moose during their stay!

This group of four caught 3,334 Walleye in a week. They had four 27-inch Walleye, one 26.5 inches, and one at 26 inches. They fished with a jig and a minnow and a few crawlers. One day they caught 354 Walleye between two guys and one day two guys caught 352!

These Northern fishermen kept track of every Northern over 34 inches and this year they boated 35! Seven of the fish were over 40 inches and their largest was 42 inches. The main lures they used were various Mepps #5 Spinners, Dr. Spoons, and Johnson Silver Minnows. The Walleye fishing started out slow and then really picked up mid-week. They caught hundreds right across from the cabin. They said the strange thing was that their best Walleye fishing was in the deepest part of the lake (25-30 feet of water). The preferred presentation was a jig and a minnow or white plastics. Two of the guys caught dozens of Walleyes trolling with Dr. Spoons at pretty high speeds. They also caught several Blue Walleyes and 12-15 Jumbo Perch. They really enjoyed the use of the sauna for the cold/windy/rainy days. 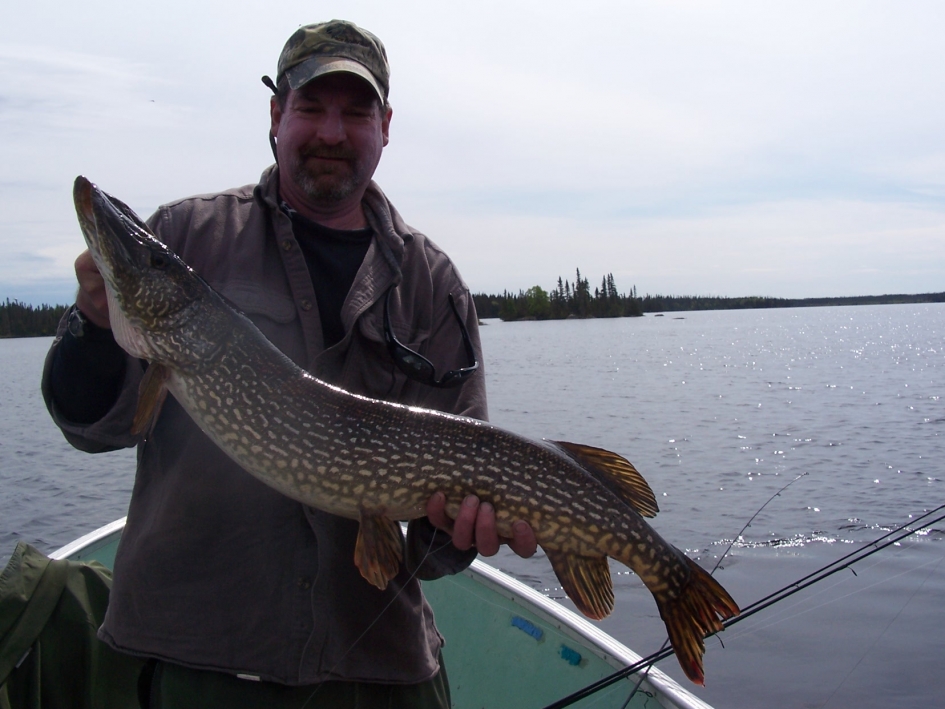 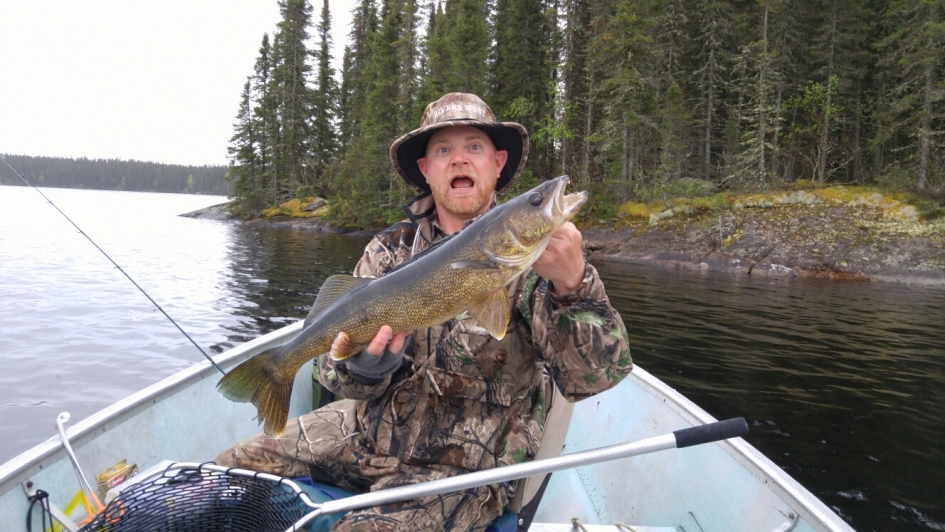 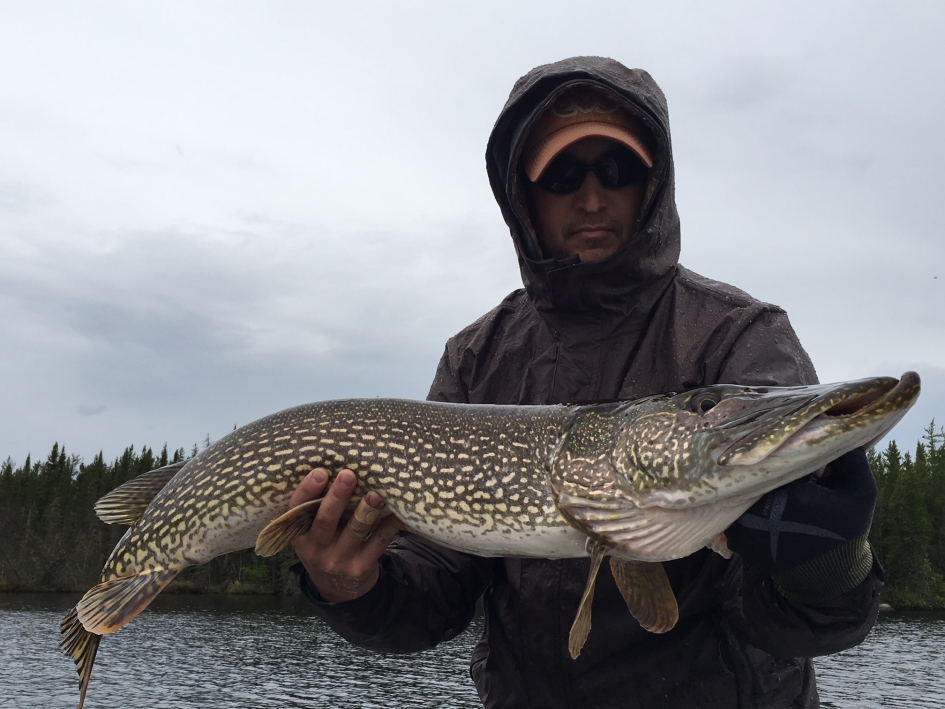 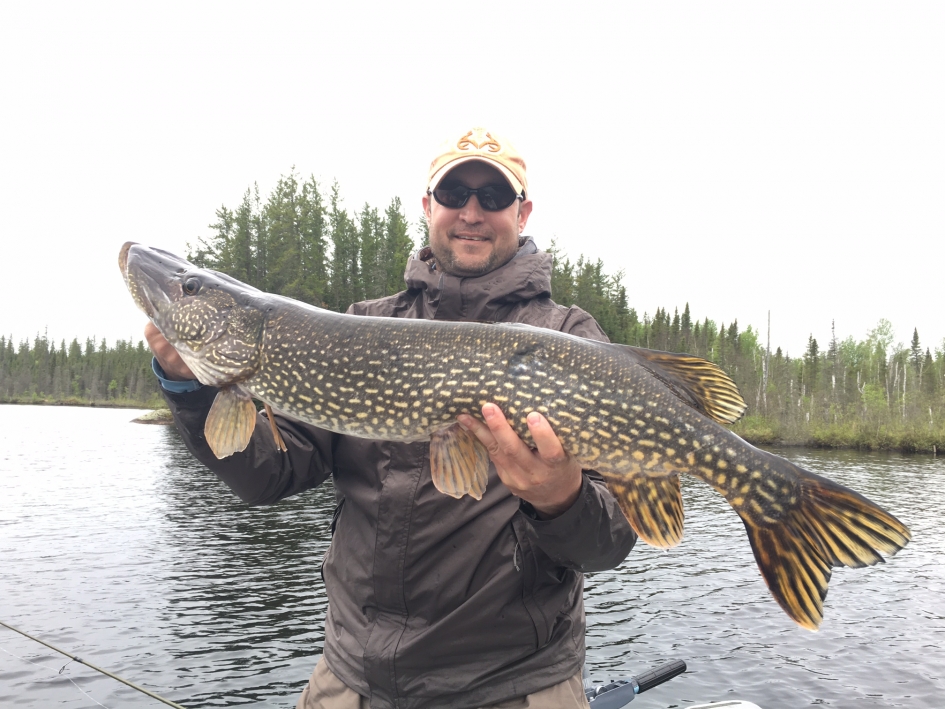 This group was not targeting Walleye, but they still caught lots to eat! The biggest Walleye was 22 inches and they were all caught on jigs & minnows. The best spots for Walleye were rockbeds in about 8 feet of water, any time of day. They had great Northern fishing with 36 over 30 inches and two of those were 43 inches. The best lures were Dr. Spoons and they found Northern anywhere on the lake. The Northern were anywhere from 5 to 12 feet deep and the best time to catch them was between 10:00 a.m. and 2 p.m. 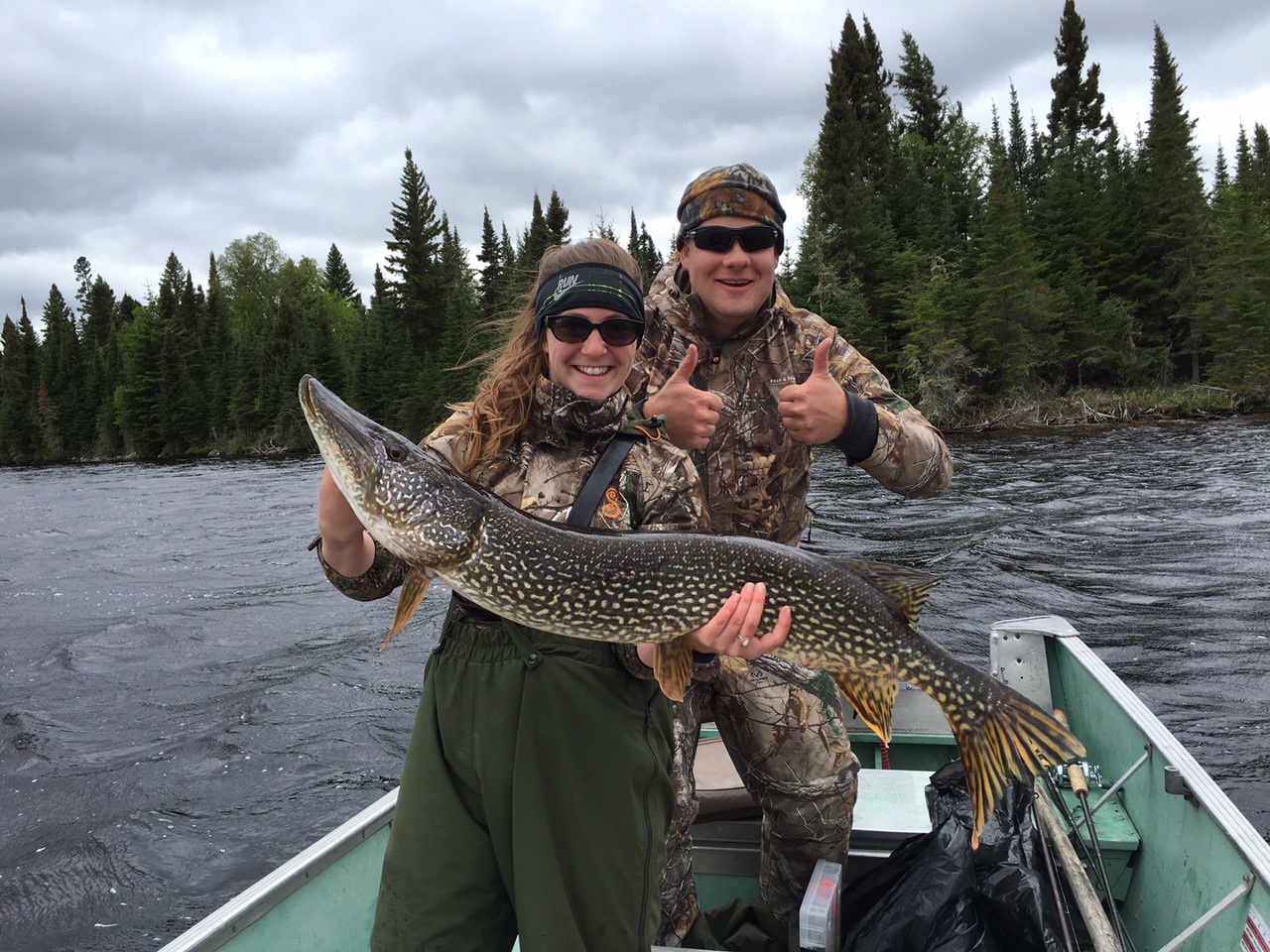 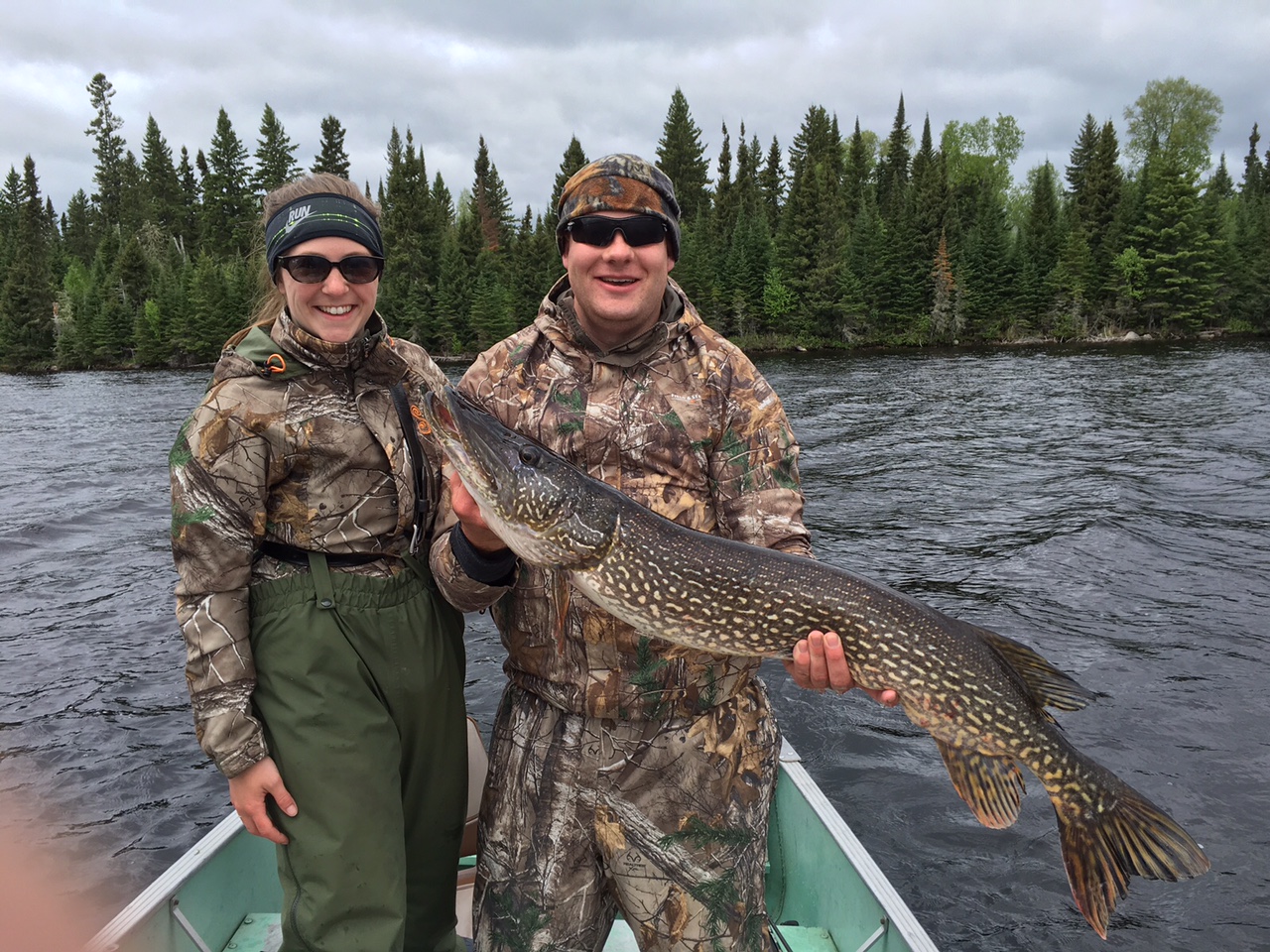 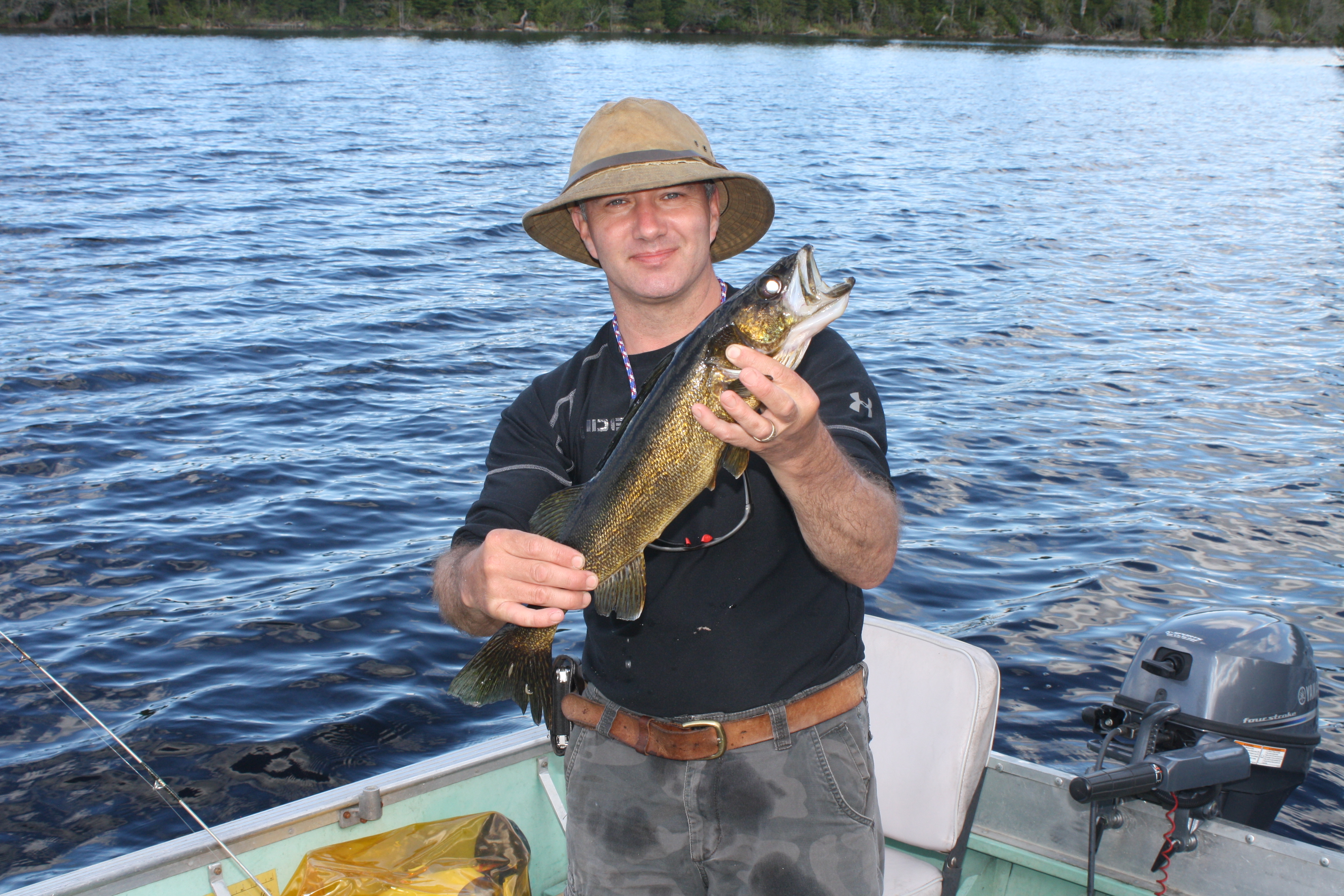 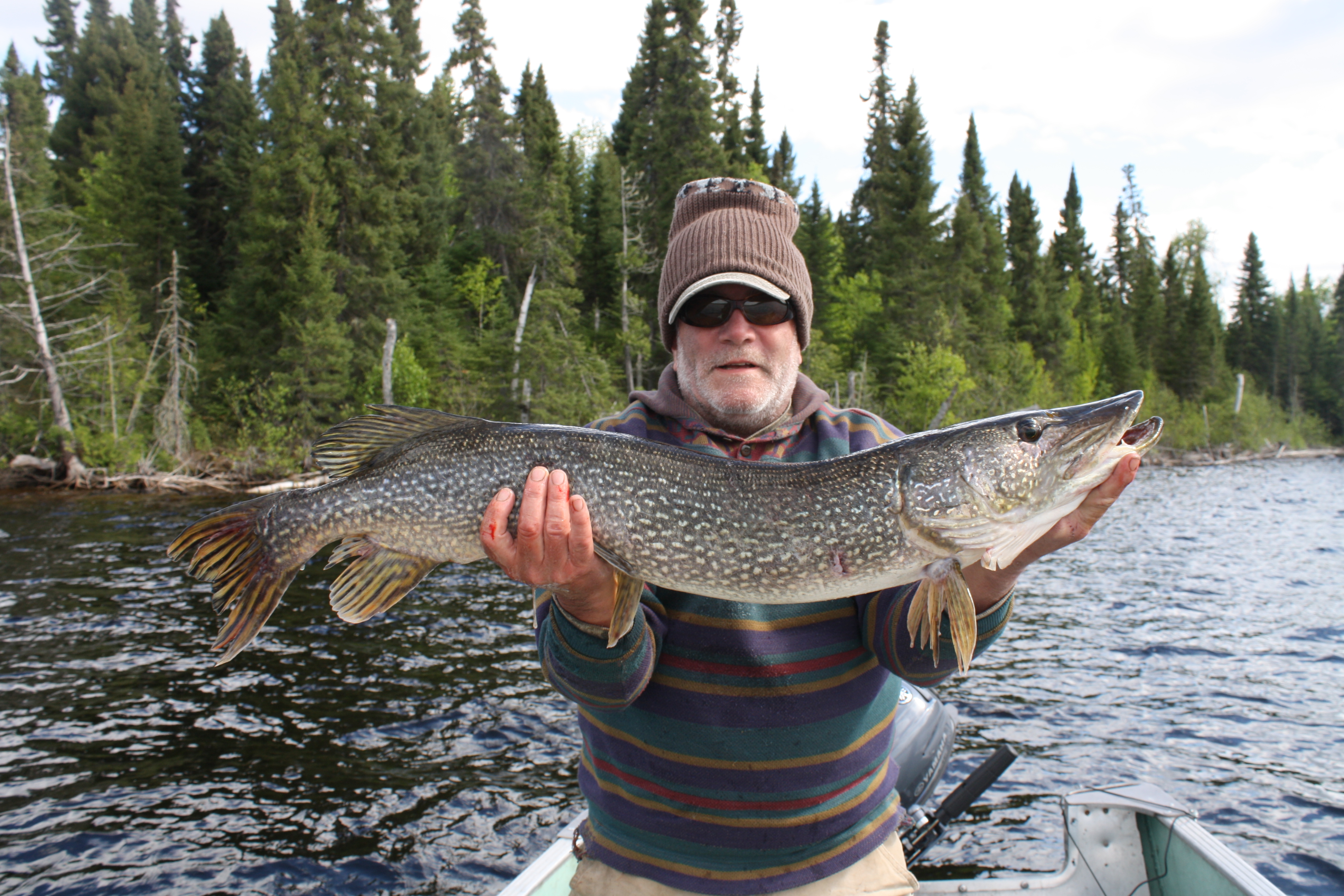 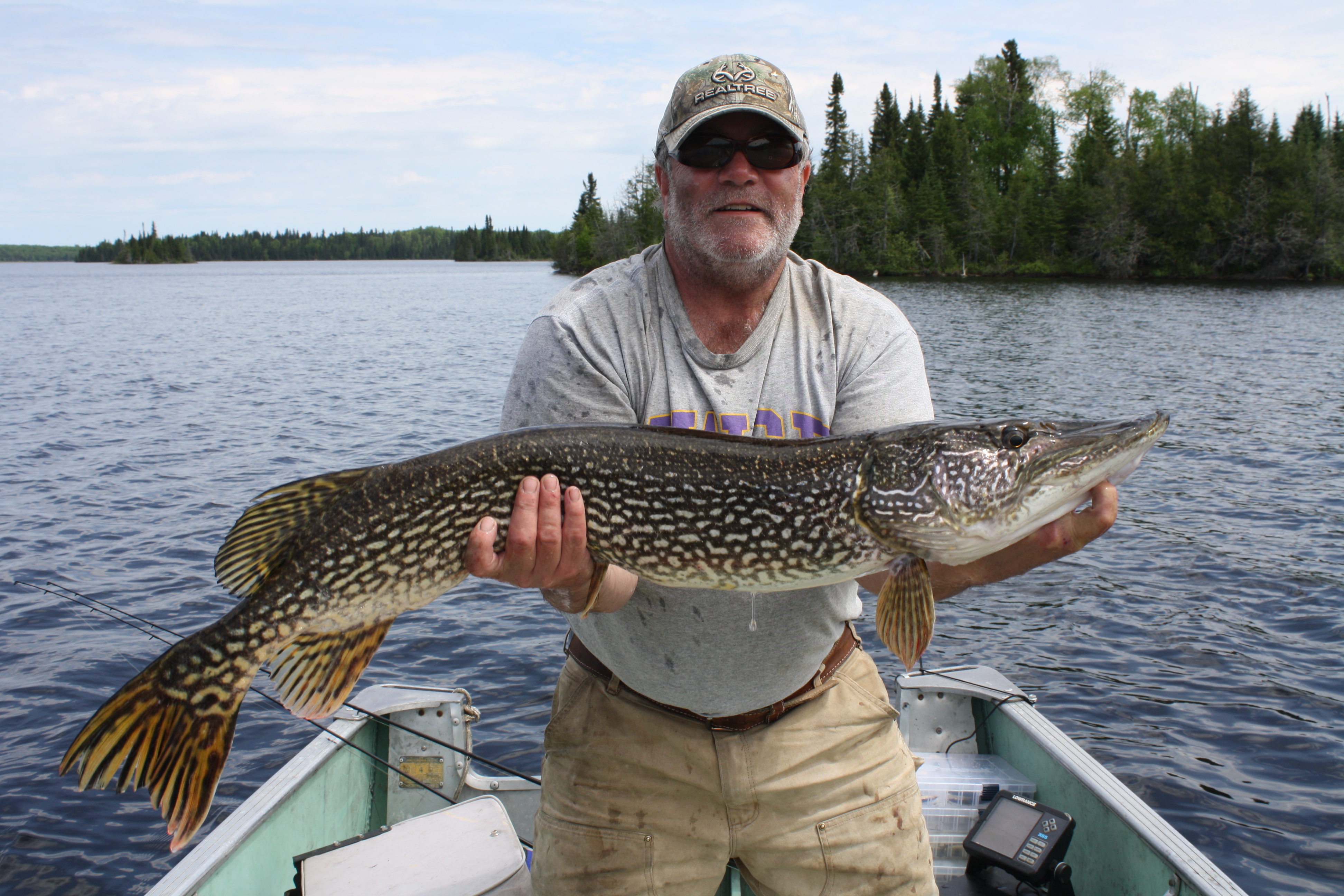 This group said the weather was changing constantly and it made it hard for them to get some good fishing in. It rained every day at different times and the wind and temperature were constantly changing. They still caught just shy of 1,000 Walleye and the biggest one was 26 ¼ inches. The best lures were green jigs with minnows. The Walleye were from 5-8 feet on points and below running water. They caught 483 Northern and the largest was 37 ¾ inches. They fished with spoons and green jigs and in running water. They noted that the Walleye seemed bigger overall compared to past years.

These two guys figured they caught about 500 Walleye on Meen Lake. They fished with a jig and a minnow and one of the best fishing spots was right off the dock! They found Walleye in 4 to 8 feet of water and the fishing was consistent thoughout the whole day. Another good spot was the North shoreline of the river about 400 yards from the portage to the little lake. They fished for Northerns with spoons along shorelines and weedbeds. They were shallow; in about 2 to 8 feet of water. No trophies caught this week on Meen, but sounds like they caught more than enough fish!

This group noted that the fishing was a little slower than usual and perhaps it was due to the water not being warmed up enough yet. They figured the Walleye were about 7 feet deep and the biggest they caught was 24 inches. The fished with jigs and minnows and enjoyed fishing the portage lakes. The Northern were found very shallow... in only about 3 feet of water. They fished using spoons in the weedbeds and the biggest Northern was 40 inches.

These two guys caught “many” Walleyes and “many” Northerns on Shabumeni this week. Their biggest Walleye was 23.5 inches and they also had four at 23 inches. Their biggest Northern was 40 inches and they had two at 37 inches. For Walleye the best bait was live minnows and the best spots were the falls inlet, the outlets, and they also had luck trolling with hardbody lures. The best lures for Northern were white hardbody lures and minnows. The fish were found shallow and deep and any time of day. They said the lake was great – lots of structure. 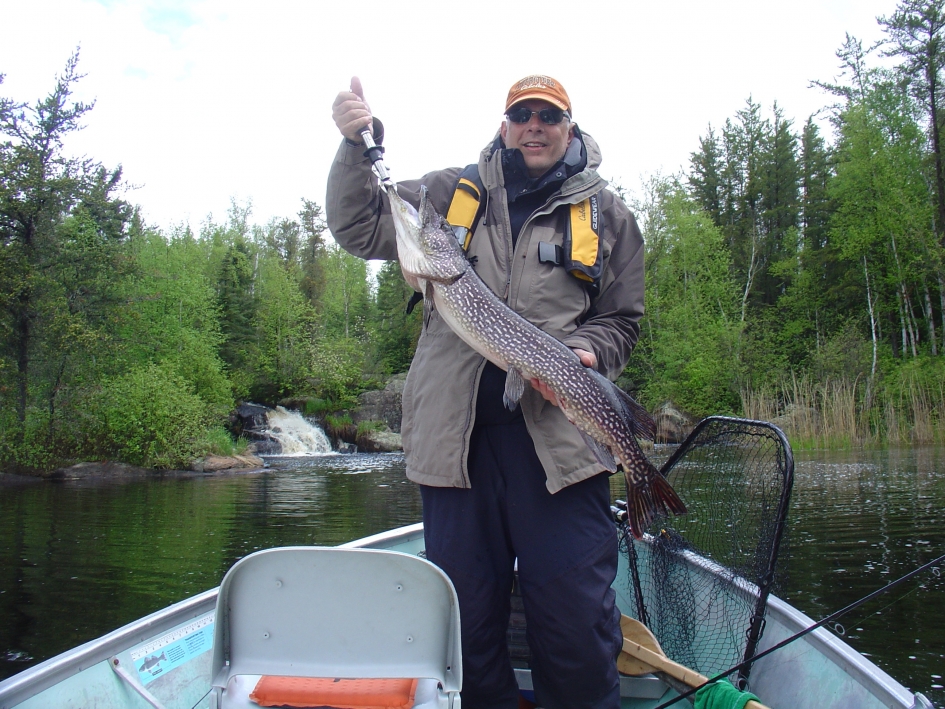 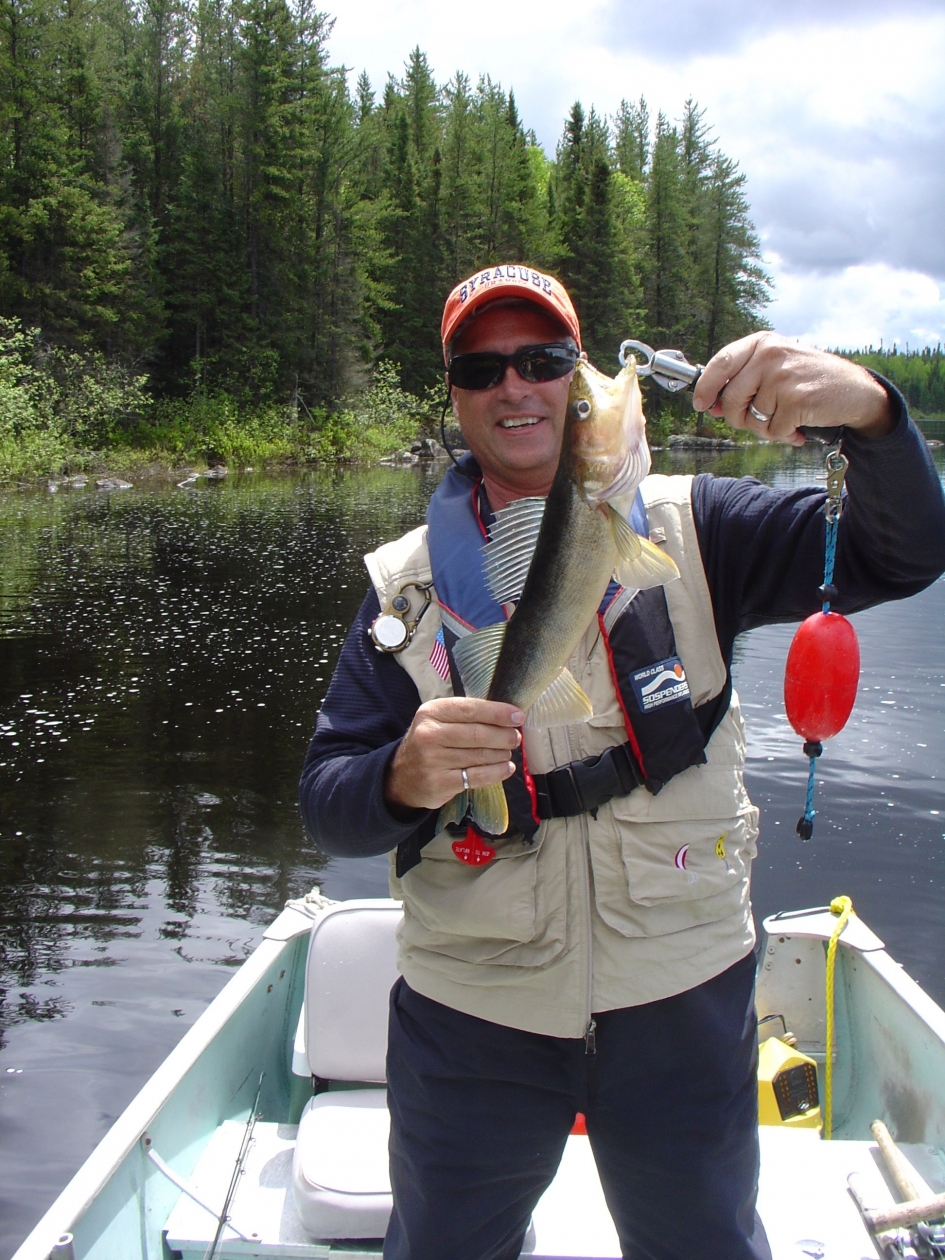 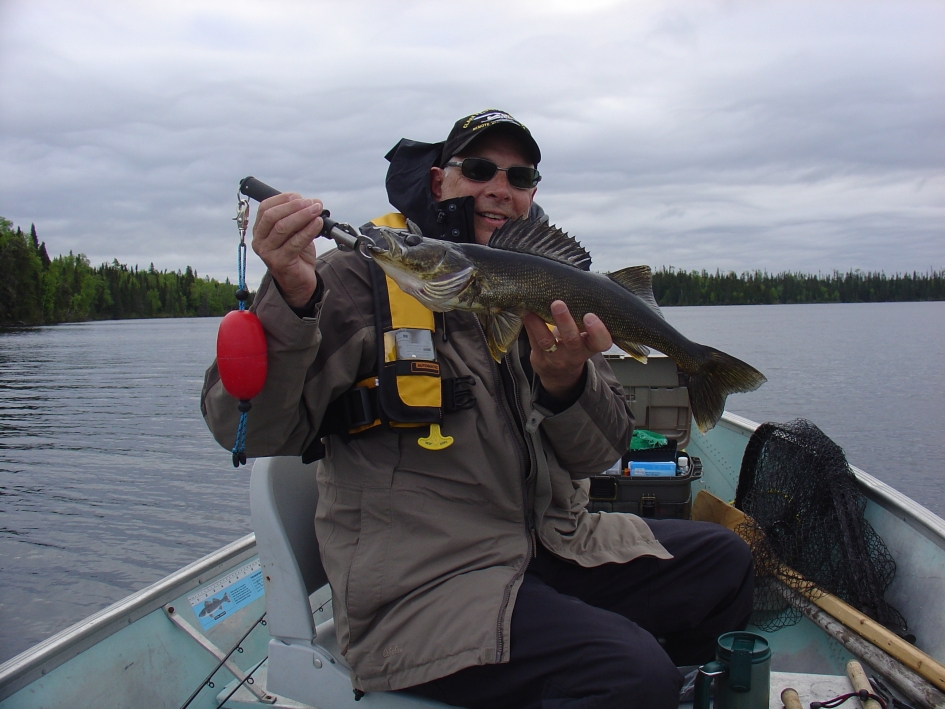