The fishing has still been good on Cedar – the guests are getting plenty of Walleye to eat. The fishing spots were not been consistent this week. Some guests were doing well in shallow, weedy areas while others were doing well in 25-feet of water. The Crappies are still biting real good and the Perch fishing has been good as well. The fish will soon be moving onto reefs and so guests will be finding more numbers in one spot. Here is a 28-inch Walleye caught this week and also a 19-inch Smallmouth. 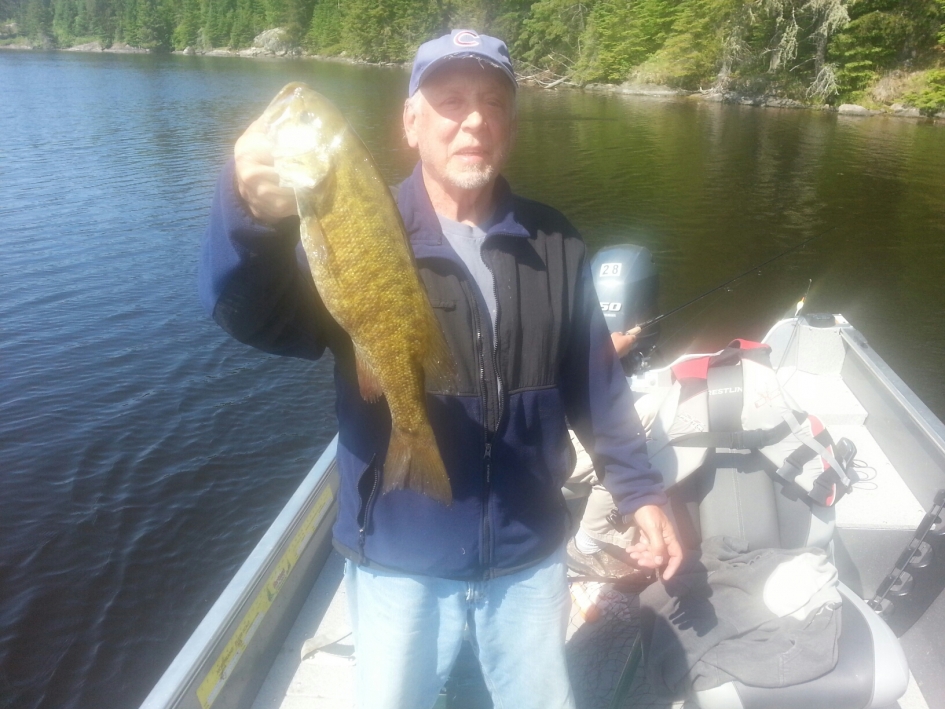 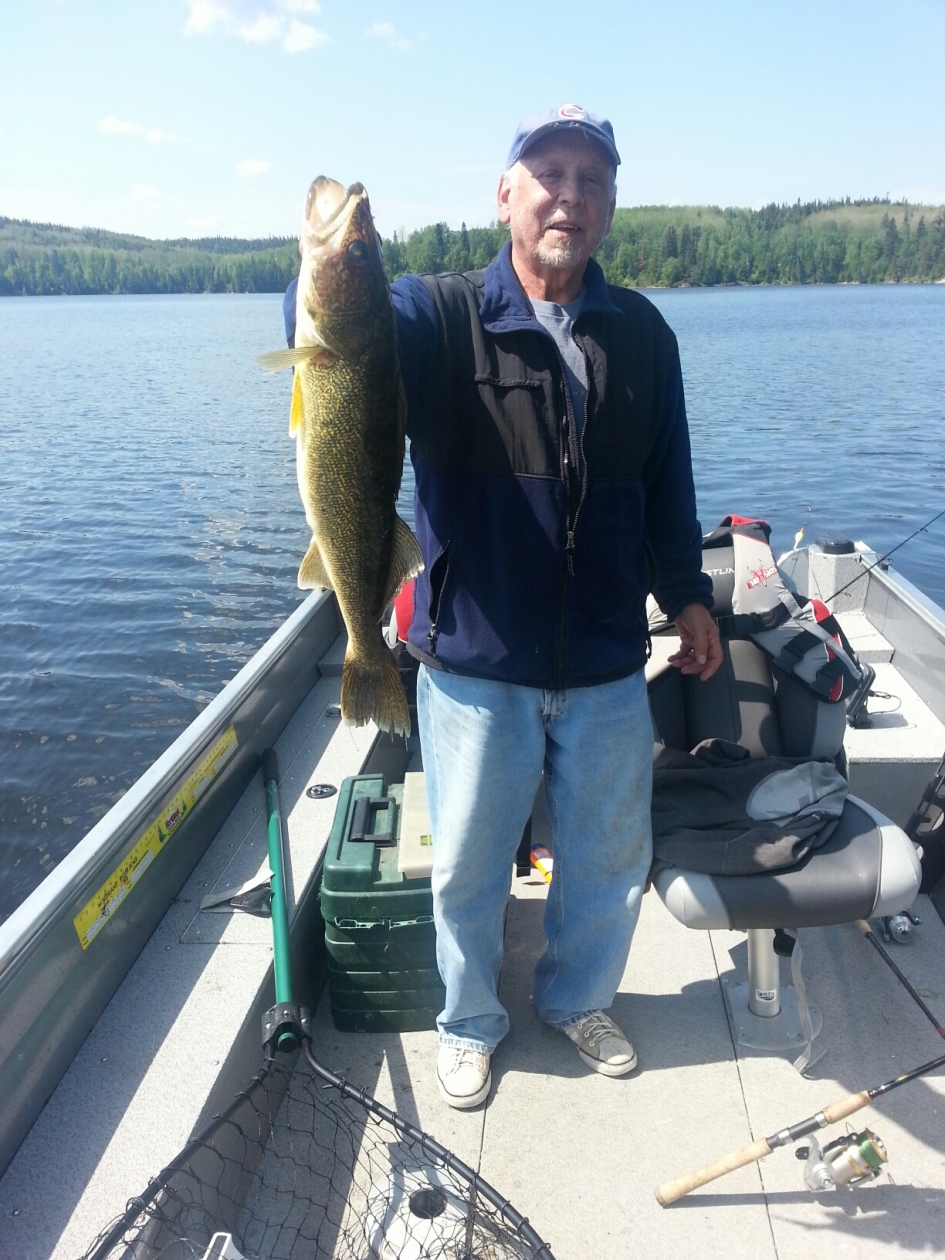 Fishing on the Chain was fair. Everyone got plenty of fish, but the quality seemed better than the quantity. There were a lot of big Walleye caught. Jimmy says the fishing is really picking up on Cobble Lake. The Walleye are not on the reefs yet, but will be in the next week or so. The water temperatures are rising nicely, so we should be seeing big improvements in this coming week.

This group totaled 1,133 Walleye and 217 Northern. The Northern were caught by accident and the biggest was 39-inches. Not bad numbers for fair weather and late rising fishermen! They said they didn’t wet a line before 10:00 a.m. and largely avoided the harder rain and colder weather that they had for a day or two of their trip. The moving water was consistently productive – particularly during the “night bite”, starting at about 7:30 p.m. They found that the most productive depth was areas of 6-12 feet. The deeper water didn’t seem to be holding any fish. They fished primarily with jigs with leeches, minnows, and worms – minnows and leeches mostly. The orange and yellow combinations were good with overcast skies and the neon pink and white were better when the sun was out. The largest Walleye was 25-inches caught off the point near the South end of the lake. There were 24-inch Walleyes caught many times all over the lakes.

Here is a report written by the group at Antenna Lake this week:

We keep track of any Northern's over 34" and this year we ended up with 24. 6 of them were over 40", which topped our total of 20 Northern's over 34" from last year.  Caught them with a variety of spoons, Mepps and Johnson Silver minnows in various depths.

We also caught more walleye's this year and a few more over the 20" mark. Biggest fish was 27" ad 25" and a couple of guys in our group fish mainly for walleye's and they averaged 100-200 fish per day. Jig/minnow combination (how can you beat free minnows!!) is the main presentation. We did catch some on Gulp/Berkley plastics.

The deck expansion and addition of electricity and the larger fridge/freezer unit were great updates to the Antenna Camp.. Almost forgot the new motors.. Another great week with the Clark's and we will be back with two groups next year... (pictures from their trip below). 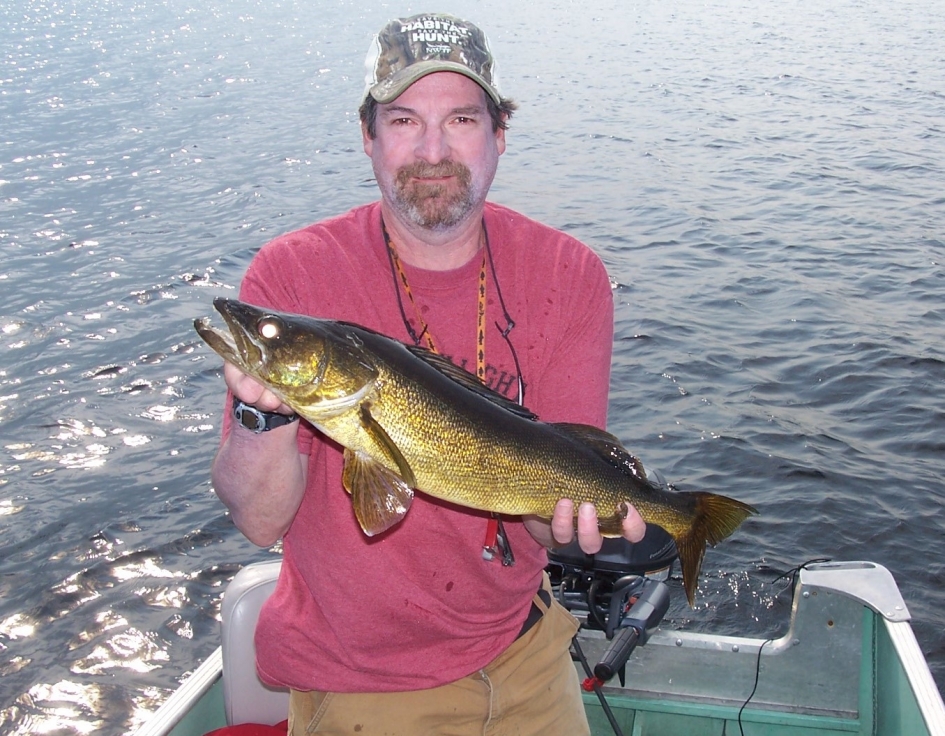 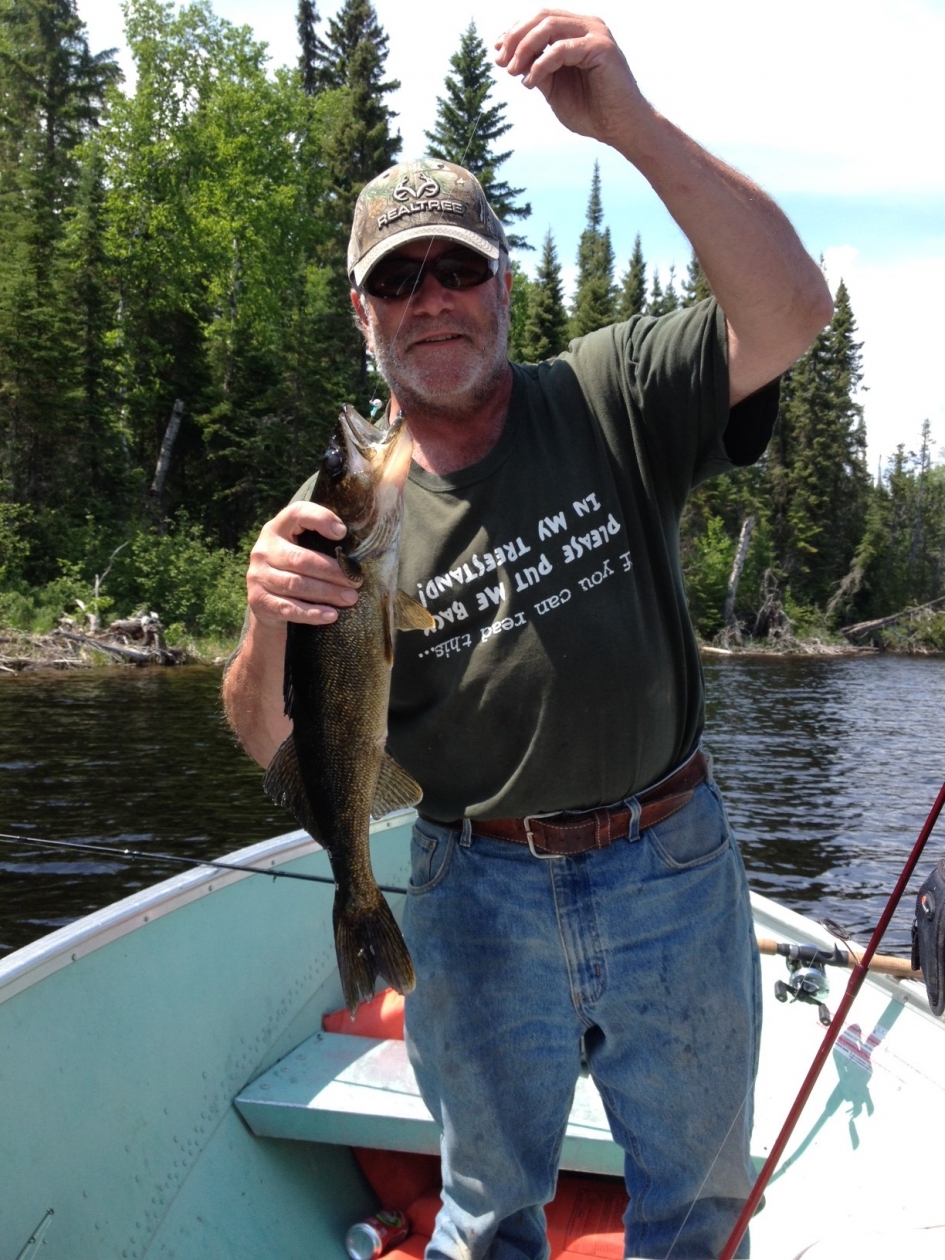 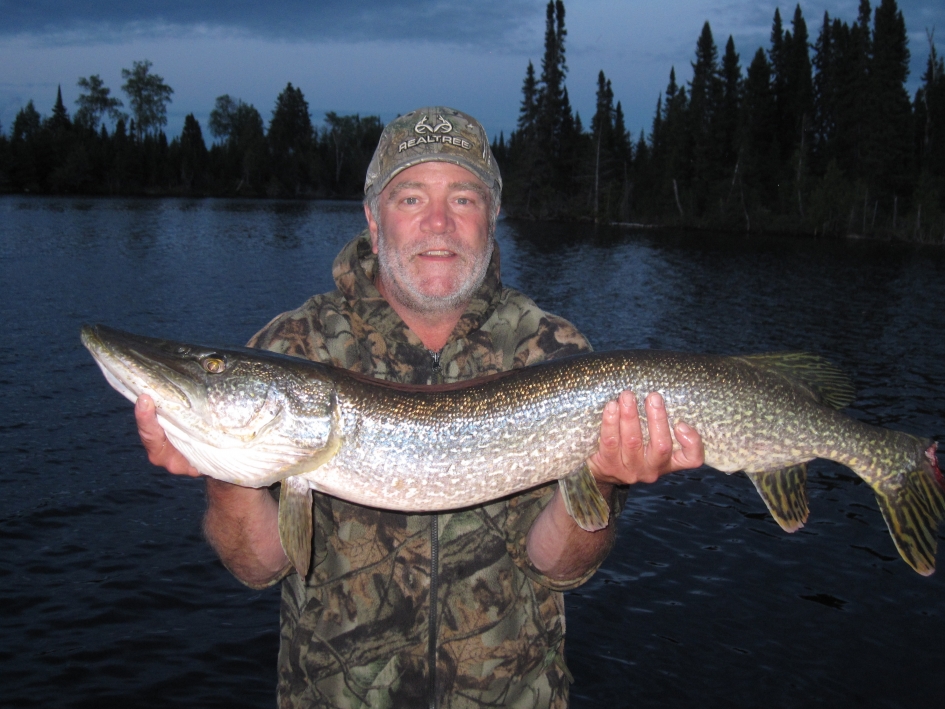 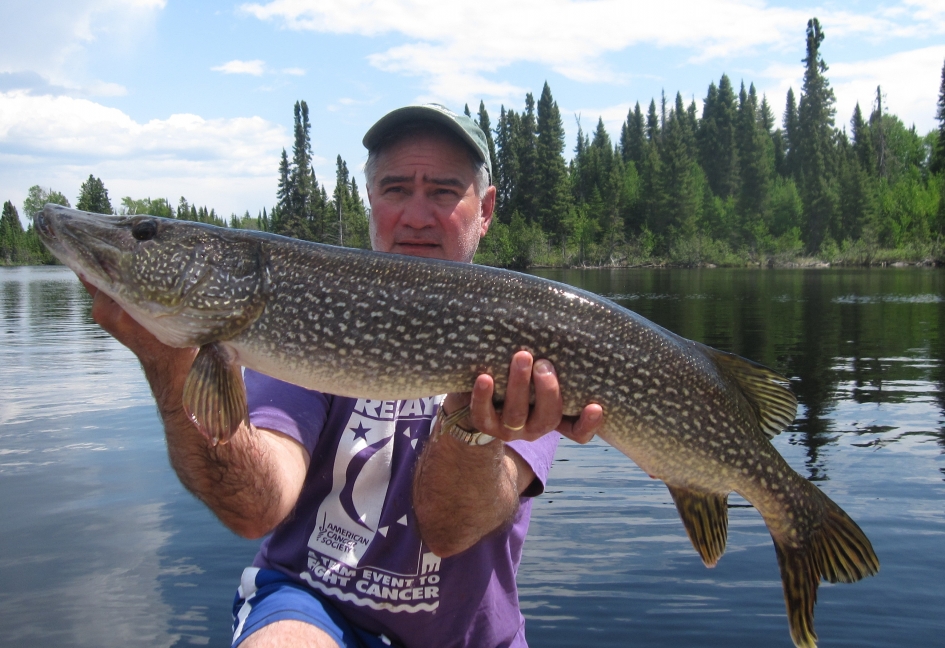 This group of 4 caught lots of fish. Their biggest Walleye was 20-inches and their biggest Northern was 35-inches. For Walleye they used minnows on jigs – the best colors were hot pink tipped and red/white. They fished shorelines and reefs. The best lure for Northern was a silver and red eye spoon – “five of diamonds”. They found Northern in the weedbeds. The best fishing was from 10:00 a.m. – 2:00 p.m. and they said fishing off the dock was great especially on the windy days when it was too windy for a boat. Oh and they also noted that it was sure cold skinny-dipping! Haha.

This group caught around 1500 Walleye and 300 Northern. For Walleye they used green and chartreuse jigs with either tails or minnows. They fished in 5-7 feet of water and mostly in areas of moving water. The fishing was good all day long. The biggest Walleye was 23-inches and the biggest Northern was 36-inches. All Northern were caught while Walleye fishing. They had wind and rain for a couple of days and did not fish much those days. The rest of the weather was good. These guys used to fish 10+ hours per day, but noted they have become more of “leisure fishermen” these days fishing only about 6 hours per day.

This week’s group caught THOUSANDS of Walleye! They fished with jigs & minnows in anywhere from 8-20 feet of water. They fished shorelines, reefs, and weedbeds and caught fish any time of the day! They said there were fish everywhere. The largest Walleye they caught was 27-inches.

They did some Northern fishing as well along shorelines, reefs, rivers, and drop-offs. They found Northerns at any time of the day and in anywhere from 7-20 feet of water. They caught this BEAUTIFUL 43-inch Northern (picture below). This group had a fantastic week. 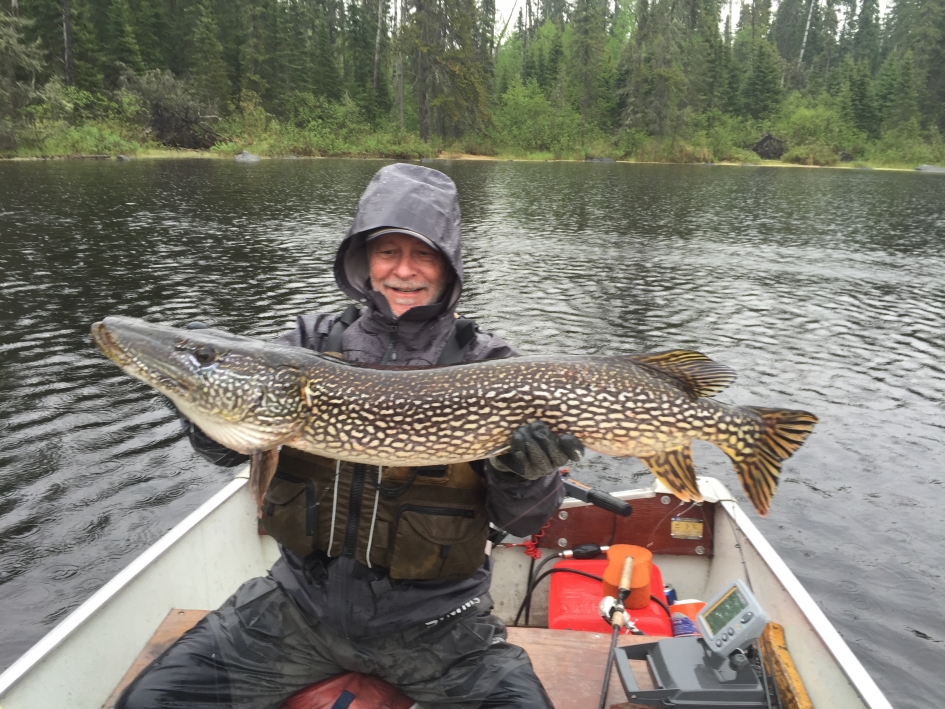 The guys that were in Wright Lake this week are “veterans” to this lake. They’ve been going for about 15 years. They are mainly Walleye fishermen and they said the fishing was consistently good at all the “hot spots” that they know are always productive. The biggest Walleye they caught was 25-inches and the fish was great at any time of the day. They did not have any Northern over 40-inches, but they said they weren’t targeting Northern. If they were to fish Northern, they said they know of some spots where there are bigger ones to be caught.

This group caught some very nice size fish! Their biggest Walleye was 27.5 inches and 5.5 pounds and their biggest Northern was 43 inches and 30 pounds! They fished using 1/8 oz and 1/4 oz yellow and chartruese jigs for both Walleye and Northern. They caught very few Northern using actualy Pike lures. They fished in 10-12 feet of water and the best fishing was anywhere there was moving water. They said the fishing was good any time of the day or evening. This group also caught many 25 & 26 inch Walleye along with another 43 inch Northern and a 38 inch Northern. The first 4 days were rainy & windy with cold fronts moving through. They had nice weather for the last 4 days.

Excellent fishing - Walleye were shallow (3-5 feet of water). The largest Walleye was 23 inches. Late afternoon was best and along shorelines. They fished with minnows and plastic jigs. The biggest Northern was 39 inches also in shallow water along shorelines.