The first two days (Sunday and Monday) were slow, however this was when we were hit with a winter weather storm. It was very cold, windy, and snowing. Not only was it hard for the fishermen to get out on the lake, but lows like that always slow the fishing down. As the week progressed, the fishing got back to normal. Between the early ice out and low water level, the fish weren’t in their traditional “hot spots”. Once the guests figured out the new “hot spots” then fishing was back on track and everyone was catching plenty to eat! There was even a monster Trout caught, which became the talk of the camp.

This is a report from one of our guests, Ken Gatzke. He has been fishing this lake for many years…

We spent the opener once again at Northern Lights Resort on Cedar Lake. Six of us go up every year for the opener, results are generally pretty good. We fish for nothing but walleye, using a jig and minnow all of the time. White and chartreuse were the best colors, 1/4 ounce most of the time.

The opening day was gorgeous, just the right temperature, and sunny. Love clouds and a little wind, but that was to come later. We hunted for the fish on the first day. We did not find them in our normal spots. We did ok, but not well. The fish that we ate for dinner had empty stomachs, so we thought that the feed would start. We hoped for a change in weather, so fish would start to hit.

We woke up the next morning to a pretty good rain, with the wind picking up. We went out for 3 hours, and called it a day, the winds were getting real bad. We took the boat that we brought up, out of the water, just to be safe. It turned out to be a very smart move. We got our change of weather, but to an extreme.

The following day we woke up to a snow storm. We did not go out, but fished off of the new dock. We caught a few fish, but it was real nasty outside. The wind was strong and cold. We hung around in the cabin until late afternoon. Three of us got cabin fever and had to go out fishing, The wind slowed down a little bit. We actually caught a good number of fish, for the short time that we went out. We fished about 2 1/2 hours, that was enough.

The next morning, we woke up to clear skies, no wind or waves. We headed north to find fish. We did pretty well in Times Square and southeast from there. We put on a lot of miles, but caught fish. I did catch a 30 1/2" walleye, took photos, and released it.

We repeated the same thing the rest of the week, doing pretty good. Found a few new spots, that are worth going to in the future. Cedar Lake has so much water that never gets touched, there has to be a lot of searching over the years to find new areas.

Fish numbers were down from last year, but we did not fish for a day and a half, that hurt. We caught most fish between 6'-15' of water. We did not catch the percentage of fish over 22" that we normally do, but that is fishing. 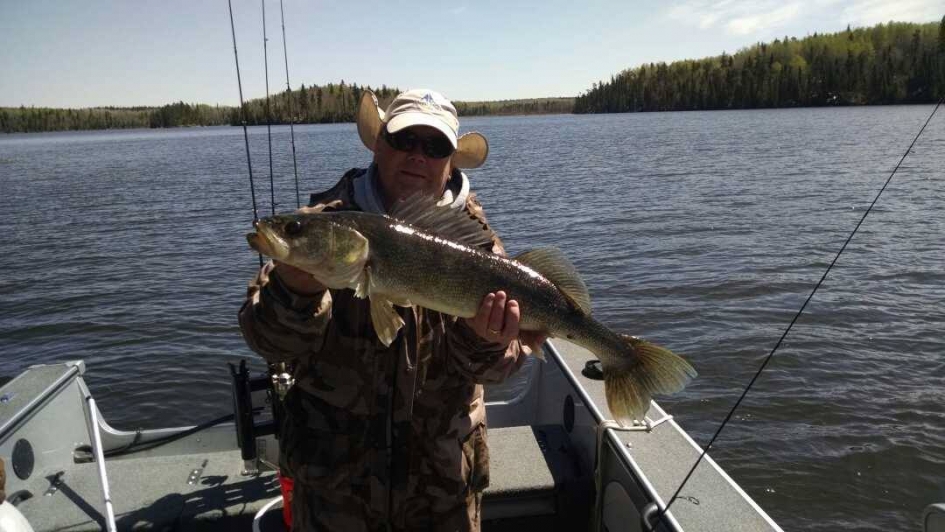