Walleye fishing was great on Cedar this week! The first couple of days when the weather was hot, this fishing was okay, but it really picked up when the temperatures dropped mid week! Walleye were about 10-12 feet deep and most were caught with a jig and minnow. Some people had good luck trolling the shorelines with plugs as well. The fish were found almost anywhere… shorelines, points, bays, etc. The Crappie fishing was on fire once again… you could catch as many as you wanted. Despite the cold and windy days, it was a great week at Northern Lights Resort!

The surface temps climbed into the low 60’s now, but the Trout remain in shallower waters. The guests have been catching them in 20-40 feet of water. The 7 portage lakes off of Anishinabi have been on fire… big number and big fish! Some daily totals reported are: Duck Lake – 105, Lakes 1, 2, and 3 – 150, and Burden Lake – 63. There were two anglers on Kahuna Lake and they couldn’t bring home their limit because of all the Walleye the caught, only 2 were under 18 inches!

This group averaged about 1,000 Walleye per person for the week! That’s pretty impressive! The biggest Walleye caught and released was 25 inches. They found wind-blown points to be the best and in about 4-8 feet of water (any time of day!) Best bait was jig and minnow or powerbaits. This group caught over 100 Northern and the biggest was 36.5 inches. The best lure for Northern was the Lucky Strike Pearl. The Northern were also in 4-8 feet of water and the best spots were the bay adjacent to deeper water.

What a great week at Antenna Lake!! This group simply caught too many Walleye to count and the biggest was 26.5 inches! The Walleye were found along shorelines, reefs, and weedbeds in about 4-8 feet of water. These guys used brightly coloured jigs with minnows. The Northern fishing was a little on the slow side, however they caught two 40-inchers and a 42-incher! They found some of the bigger Northern in deeper water up to 20 feet. They were hitting the same bait as the Walleyes. 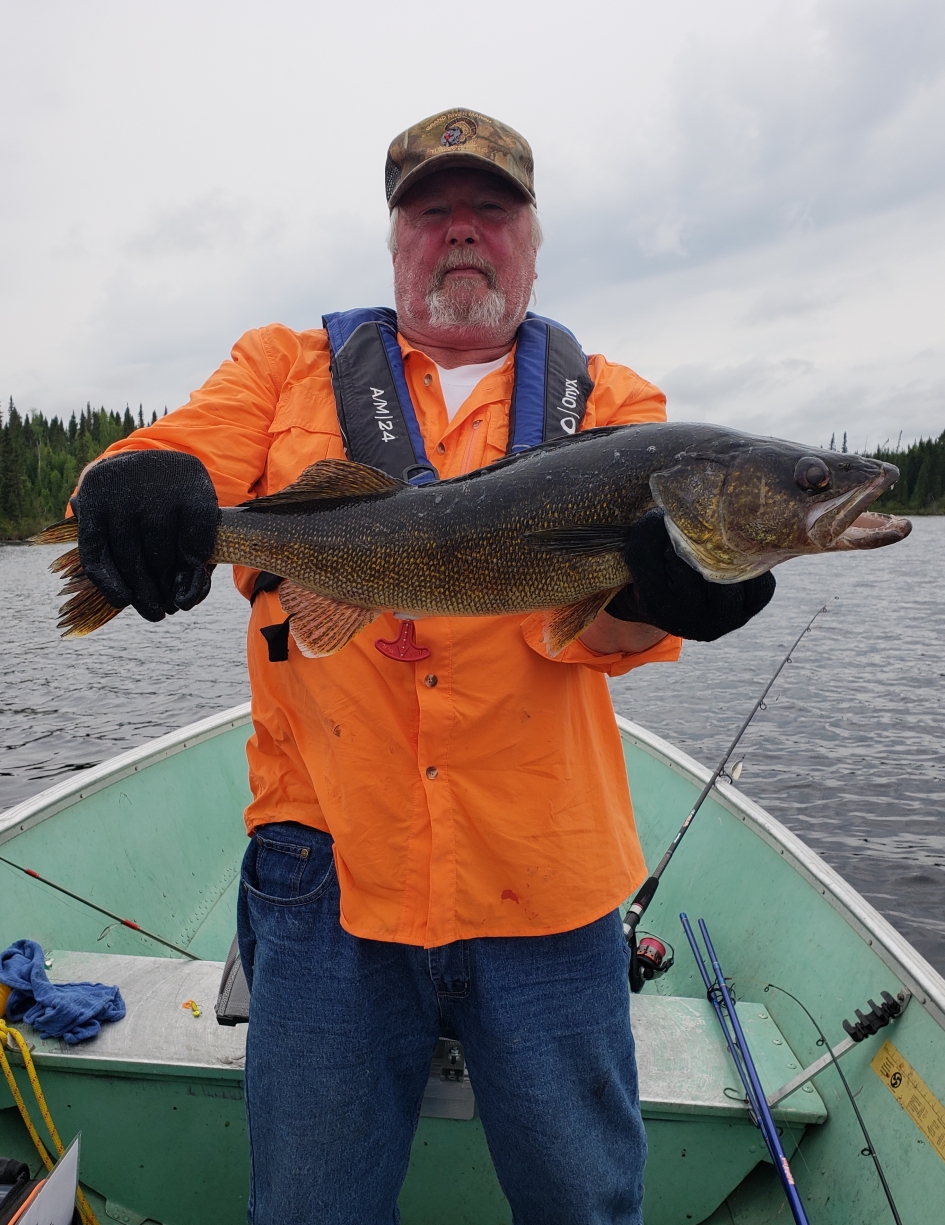 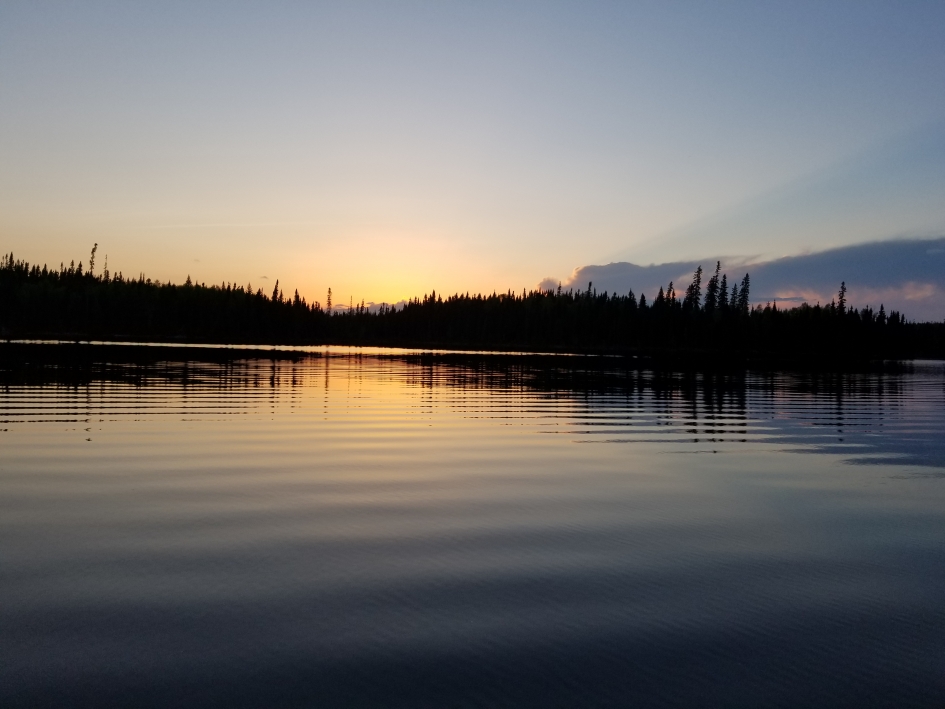 This group had tremendous Walleye fishing and also boated lots of trophy Northern! Their biggest Walleye was 27 inches and their biggest Northern was 42 inches. They caught hundreds of Walleye mostly along the shorelines and off the dock. They used jigs and minnows and fished 4-8 feet of water. They threw spoons and topwater baits for Northern in the weedbeds and along points in 4-8 feet of water. They caught 28 Northern over 30 inches and 6 Northern over 40 inches!

This group fished shorelines, reefs, weedbeds, and the rivers for Walleye. The best bait was a jig and minnow and they found Walleye anywhere from 5-20 feet deep. It seemed that the fish were biting just about any time of day. Their biggest Walleye was 23 inches. They found Northern just about anywhere while Walleye fishing or casting spoons. The biggest Northern caught was 36 inches long.

These two fishermen caught hundreds of Walleye and hundreds of Northern on Pusher Lake. The biggest Walleye was 23.5 inches and the biggest Northern was 39 inches. For Walleye they used jigs and minnows and for Northern they used blades and plastics. The fishe were all over the lake and in 5-10 feet of water.

This group had such a great trip to Fawcett! They even got almost a whole extra day of fishing as their flight home was delayed due to weather. They got at least 50 Walleye per boat per day and about 30 Northern per boat per day. The biggest Walleye was 25 inches and the biggest Northern was 43 inches. For Walleye they fished the shorelines in 10 feet of water and used all different sorts of rigs including Gitzit, Lindey, and worm rigs. The caught the Northern on the same types of bait.

This group did a lot of Walleye fishing at the lake’s Northwest inflow. The biggest caught was 26.5”. Live minnows on a 1/8 or 1/4 oz. jig was the preferred method. While trolling a different area of the lake, a 25” Walleye was caught on a 1 oz. spoon. As far as Northern Pike fishing, the biggest caught were 39” and 41.5”, each in front of the cabin off of the rocky point. They were both caught on a daredevle imp (5 of Diamonds and Red/White, respectively). The group also caught a couple 33” and a 36” pike while jigging for walleye at the Northwest inflow. The Southwest inflow produced pike, but in the low 20-inch range. 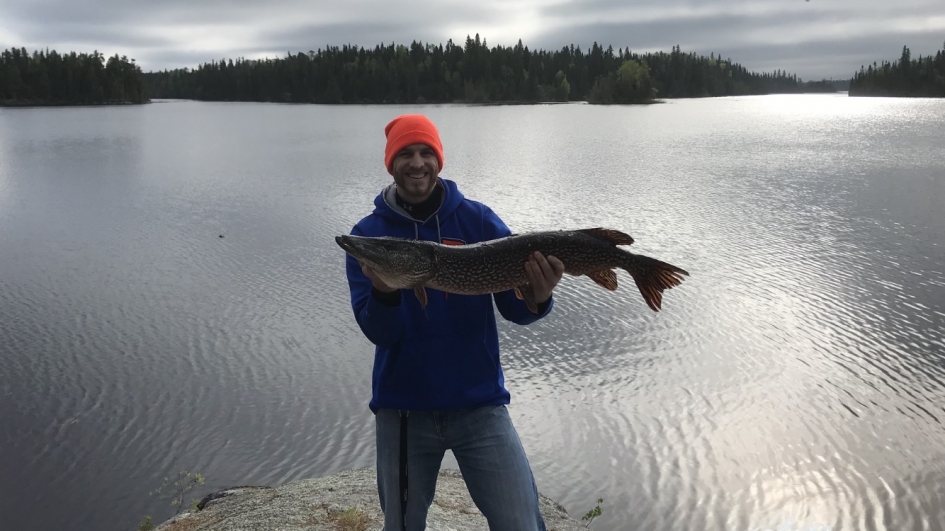 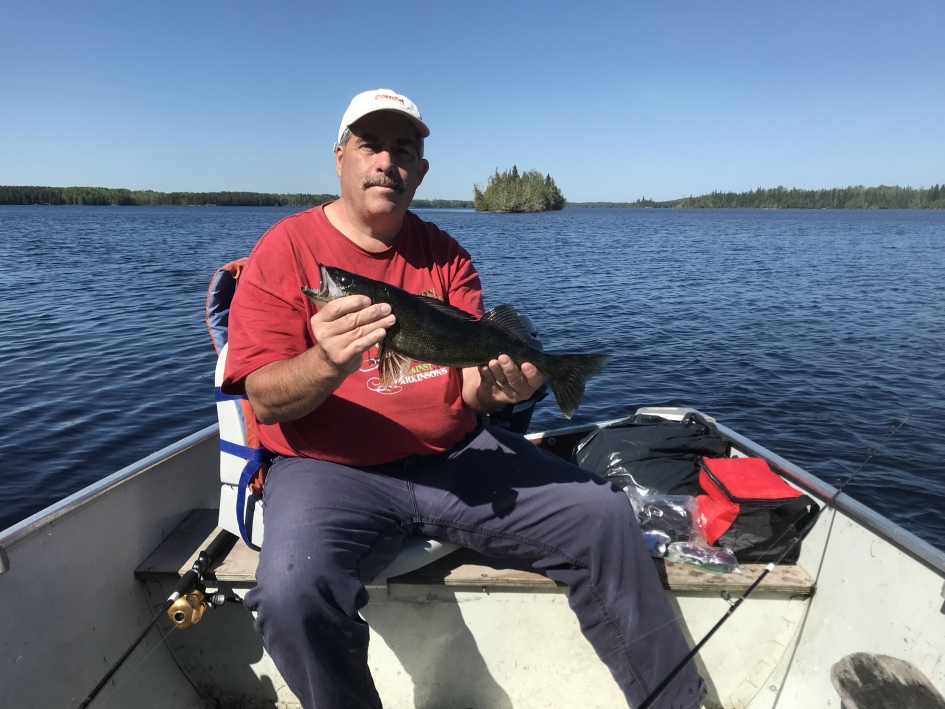 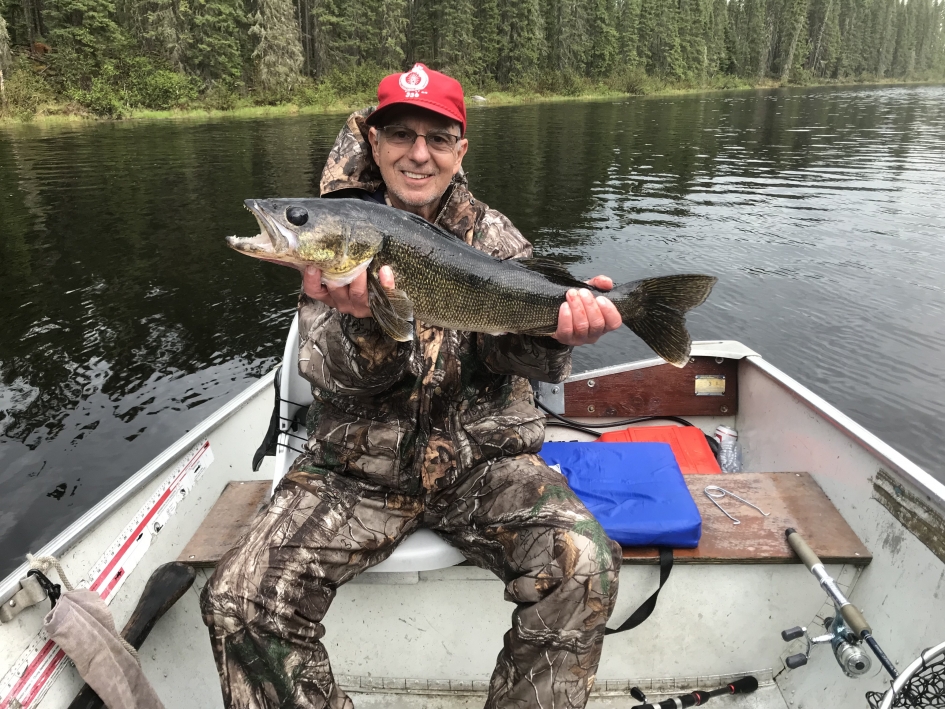 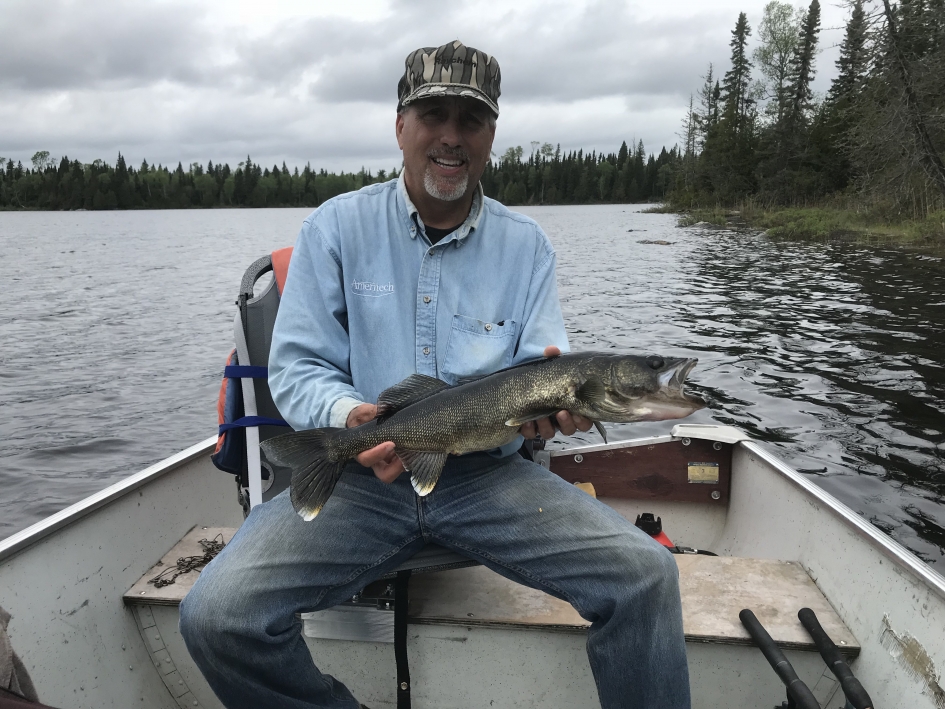 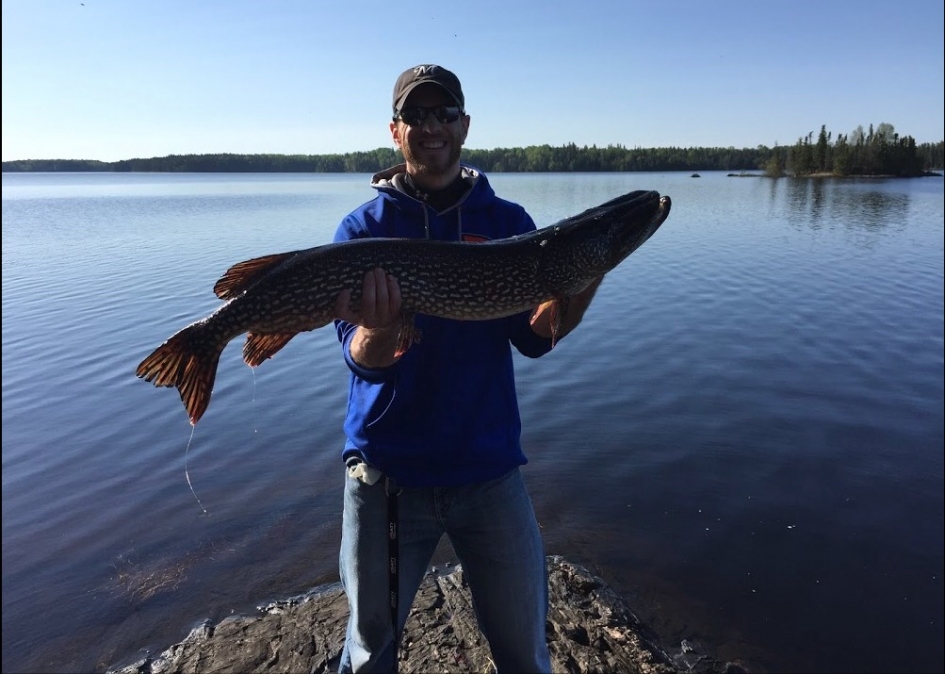 These two found that the fish were noticeably bigger on Bumpy Lake than Cook and super easy to find! However, they did good on both lakes for Walleye fishing and Northern. The biggest Northern was actually caught right off the dock! 41 inches long! The best spots overall for Walleye were rocky points in 8-15 feet of water and the rivermouth on Cook for Northern in about 4 feet of water. For Walleye they used blue and white or gold jigs and for Northern they used jigs and jointed shads. 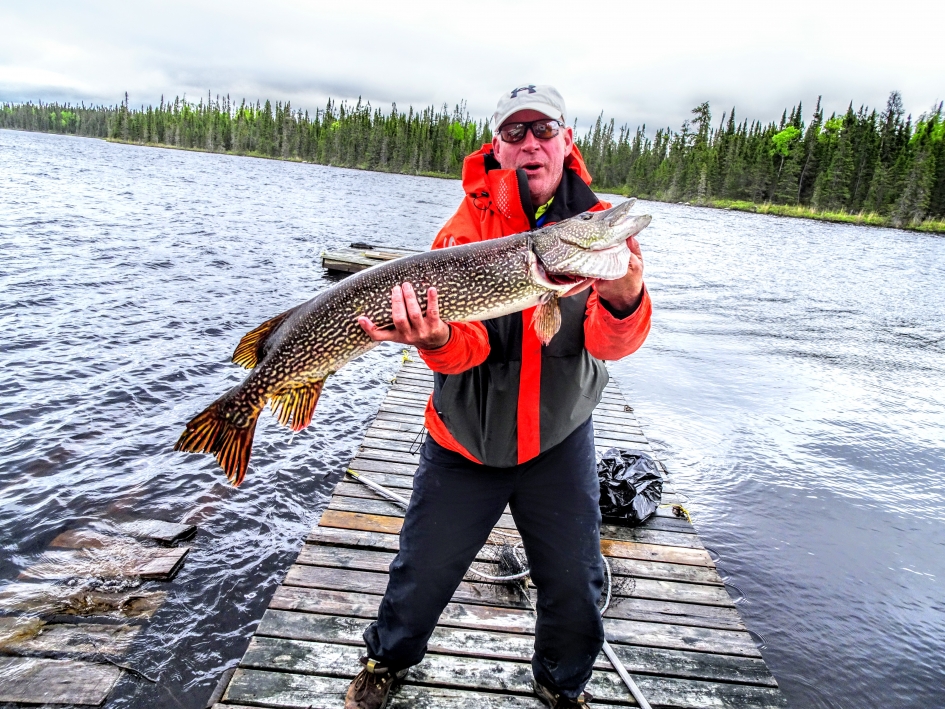 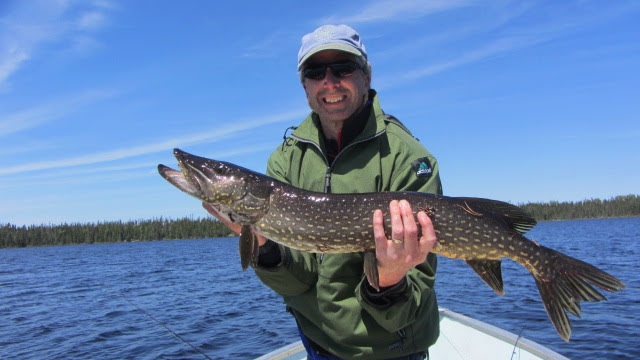 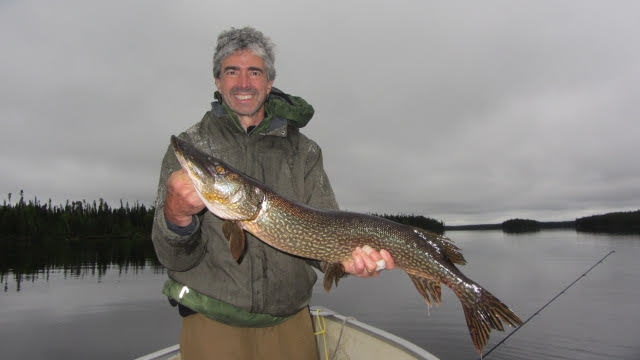 This couple caught about 400 or 500 Walleye and the biggest was 27 inches!! They used deep-diving rogues and roadrunners tipped with minnows. They found fish almost everywhere on the lake and the best time of day was early in the morning and later in the evening. They did good with Northern fishing as well using the same baits as Walleye and also spinner baits. The best spots were the inlets. They had a great time on Austin Lake... they enjoyed the cabin very much and even saw a bear swimming across the lake! 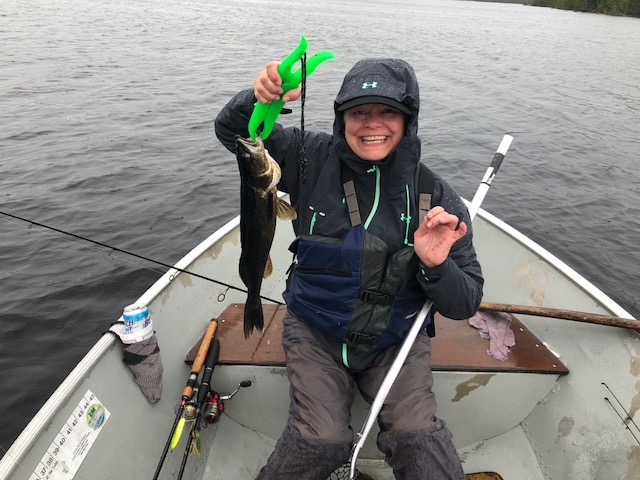 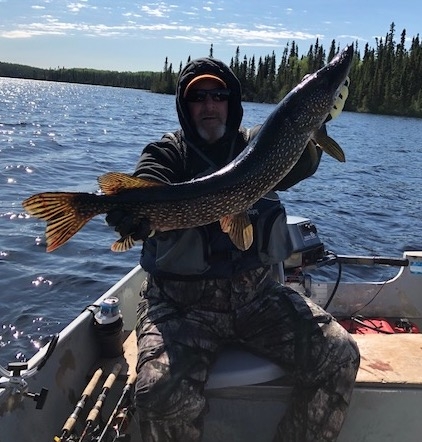