Once again the Crappie fishing was on fire! The Walleye fishing picked up from last week, but the guests are finding a hard time finding those “hot spot”. They seem to still be scattered. Perch fishing was good and there were some Northern caught as well.

It was another great week on the chain. Lots of Walleye action and the evenings were especially hot. They are moving onto the rock piles and feeding of the crayfish (a bit early). Lake Trout are on their way down on Boulder Lake. Smallmouth action was crazy! The Pike action on the river was awesome as usual. The only bad news is that the May flies have had an early hatch due to the warm water temperatures.

They fished a lot in the river South of the cabin where the Walleye were stacked up. Most of the guys used 1/8 oz and 1/4 oz jigs with live minnows… one used a PowerBait minnow and had equal success. The biggest Walleye caught was 23” and lots in the 20-22” range. For Northern fishing, Doctor and Daredevel spoons worked well. Mepps #5 spinners and Rapala jointed minnows were good too. They had success around a rocky island East of the point North of the cabin and in the river where the Walleye were. The bays North and South of the cabin were a bit stingy at producing Northerns. On the last day they caught some bigger Northerns while jigging for Walleye and some Northerns even attacked the hooked Walleyes as they were being reeled in. The biggest Northern was 16 lbs and about 38”. They lost a 40”+ Northern at the boat, which they hooked trolling with a doctor spoon. 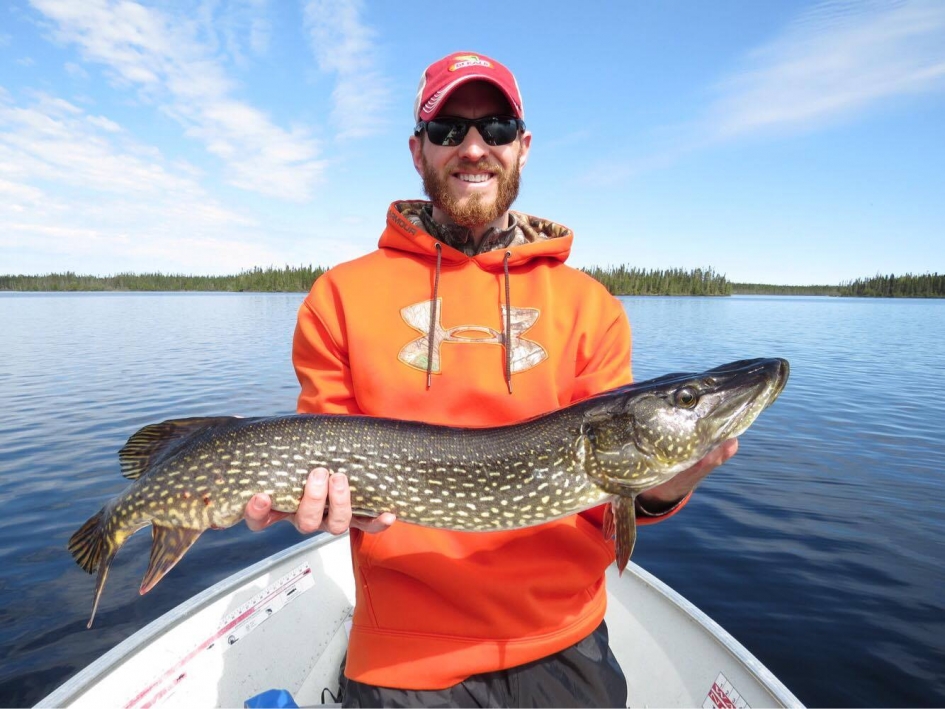 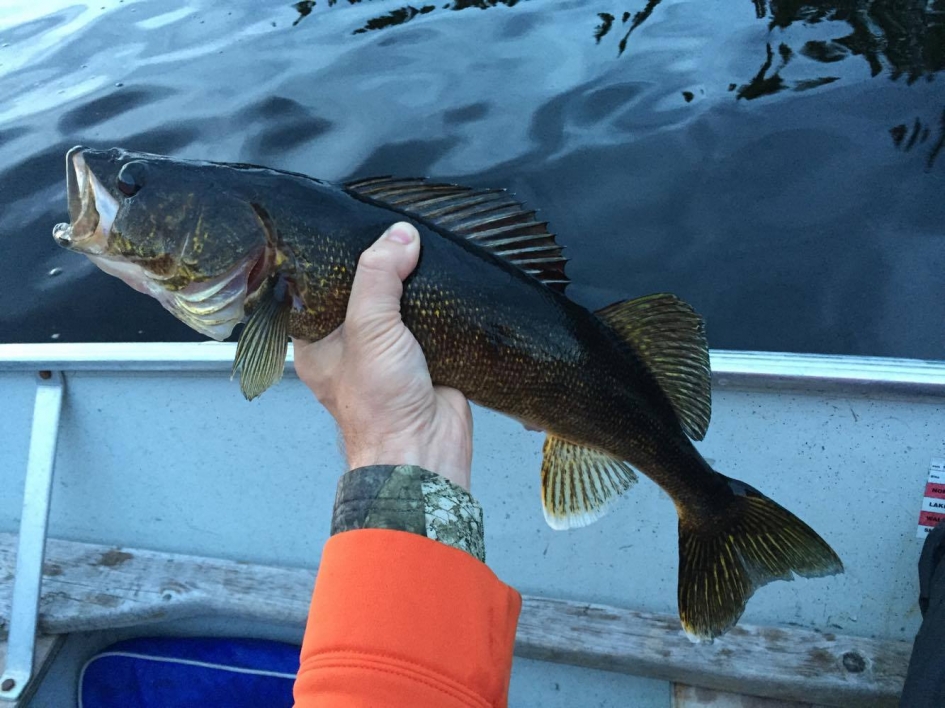 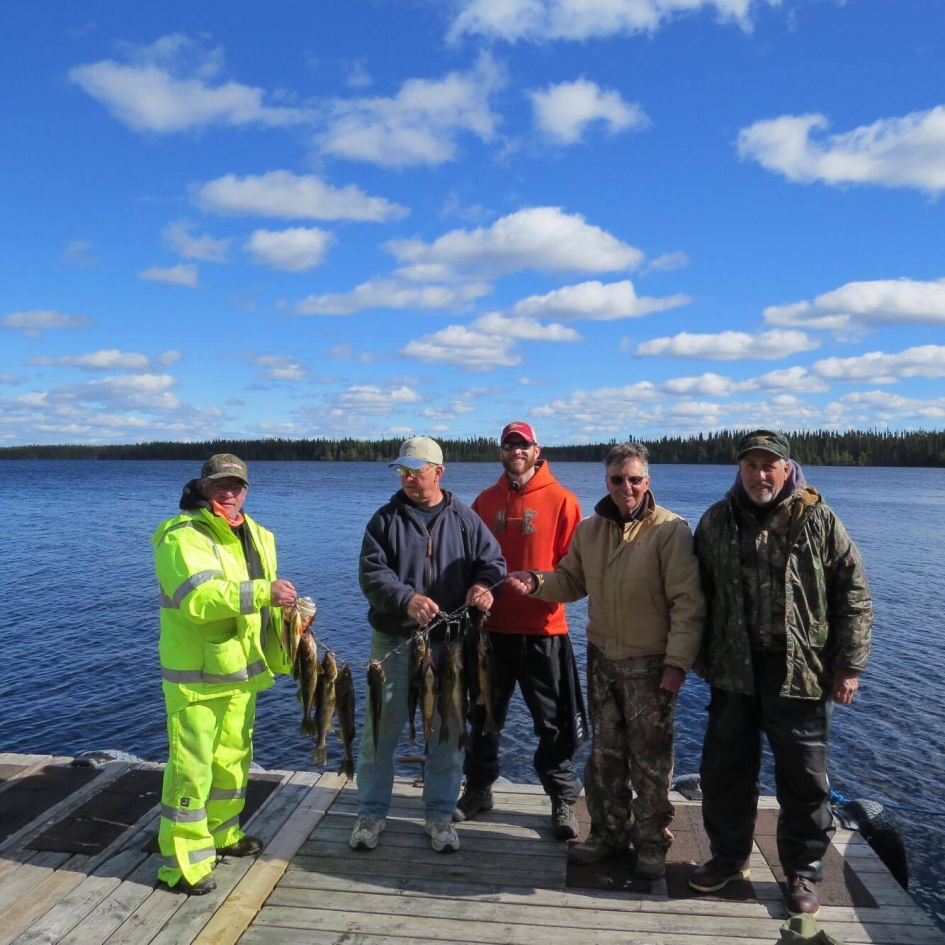 This group caught too many Walleyes to count! The biggest one was 24”. They used minnows and leeches. The best fishing spots were the inflows in about 8 feet of water. The biggest Northern caught was 37 inches. They had a great week of fast-paced fishing and really enjoyed this scenic lake.

These four guys caught over 750 Walleye. Most were under 18”, but the fishing on Cook Lake was fast-paced. They fished with jigs and minnows and also had great luck with fly rods. The Walleye were in about 4 feet of water. They said that Cavano Lake had nice Walleye in it, but Bumpy was slow this week. They also did great Northern fishing and caught 12 over 36” and 4 over 40”!! They also noted that the dock fishing was great for Northern.

The Walleye fishing was really good especially when there was a nice chop on the water. They caught two 24” Walleyes. They fished mainly with jigs and minnows. They caught about 1,000 Walleye off of one shoreline alone. They threw metals in the bays for Northern and the biggest they caught was 36”.

The weather was mostly cold and rainy except for the last couple of days. The water temperatures were 58 degrees to start and warmed up to 64 by the end of the trip. The Pike were slow… they caught a 38”, 35”, and 34” and lots of smaller ones. They could catch all the Walleye they wanted for dinner, but they were mainly targeting Pike.

This group caught about 500 fish. They had some younger kids that weren't as experienced and figured if they had a group of all experienced people they would've easily caught 1000 to 1500 fish. The kids had a blast fishing off the dock! The fishing was as fast as they've have ever experienced. The largest Walleye was 26 inches long. The same person also caught several 23 inch and a 22 inch within the same 15 to 20 minute time frame! They fished mostly with jigs and minnows and the Walleyes were shallow between 2 to 12 feet of water. The weather got cool and rainy and the Walleye seemed to go deeper but they still caught them in 12 to 15 feet of water. Anywhere the wind was blowing, there were fish. They caught around 50 Northerns mostly on top water or Jig and a minnow. They did catch several Northerns on spoons and top water baits as well. Fishing for Walleye seemed to be better during the evening hours, but they caught fish all day.

Their biggest Walleye was 28 inches and their biggest Pike 39 inches off the dock!! They did good casting spoons into shorelines and trolling (for Walleye). The Walleye were in 6-10 feet of water. They also did good on the portage lakes. Spoons and Rapalas were best for Northern and they were also in 6-10 feet of water along shorelines and in the portages. They explored all the portage lakes and had luck on all of them. They said the cabin was the nicest they've ever had on a fly-out!