It was a fantastic Walleye opening week on the Indian lake Chain. The walleye are about 2 weeks ahead, They are starting already on making there move from there spawning ground area's to their mid June shore line spots. Lots of large Walleye caught and released this week. Of course, the dock fishing doesn't come any better then here at KCs Landing!

Northern Pike is just starting to pick up, some pretty respectable ones caught & released this past week. Lake trout are on there way down already, which is well ahead of normal. There were still plenty of Trout caught and yet another huge Trout caught and released on Boulder Lake by our regular customer, Vito, from Wisconsin, Every year he gets a big daddy, takes a picture and releases it giving another lucky fisherperson the chance at it! It's nice to see so many catching and releasing all of the species.

Many of our guests arrived Friday night to get settled in their cabins and prep their fishing gear for the morning. It was a very hot and dry weekend much like the majority of our spring thus far. We had some new people on the lake as well as some veterans. For the first day or so, the guests were having a hard time finding the fish as they were not in their “usual” spots. The water temperature is exceptionally high and the Walleye are moving to where they should be mid-June. Once our “veteran” groups figured out their new locations, they shared some spots with the other guests and by day two the results were coming in MUCH better. One group of 5 ended up with over 700 Walleye catches for the week and one of our new guests ended the week with a monster 29-inch Walleye caught and released. The Crappie bite was hot this week down on the other end of Cedar and the Bass fishing was great as well. There were some nice Northern caught as well, but no monsters reported. Most everyone fished with a jig and a minnow and some reports were that the fish were very shallow (unusual for the high water temperature), but some people found them a little deeper as well. 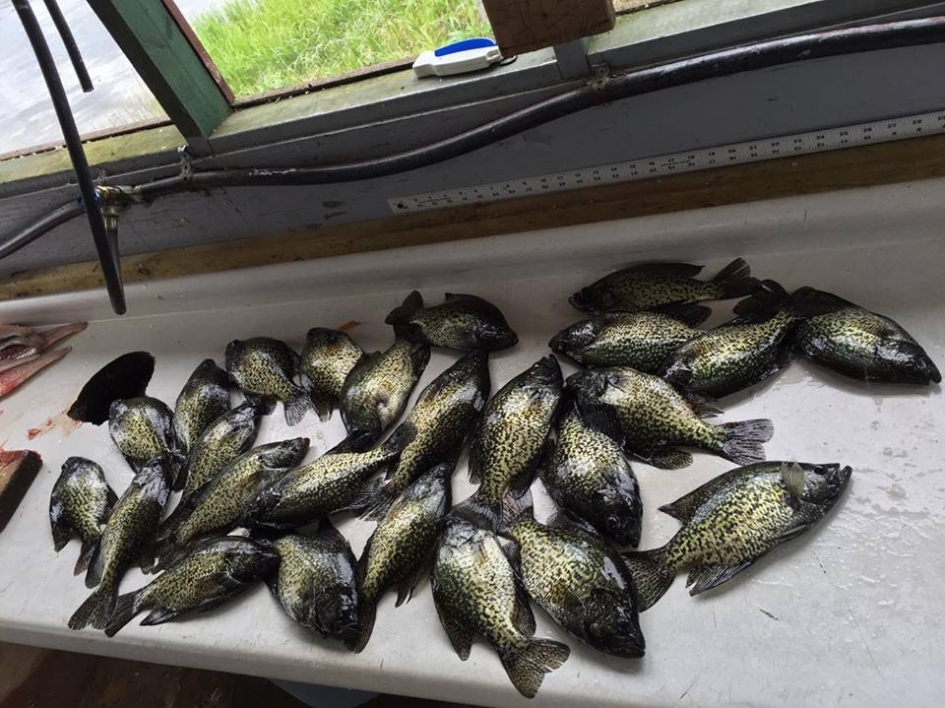 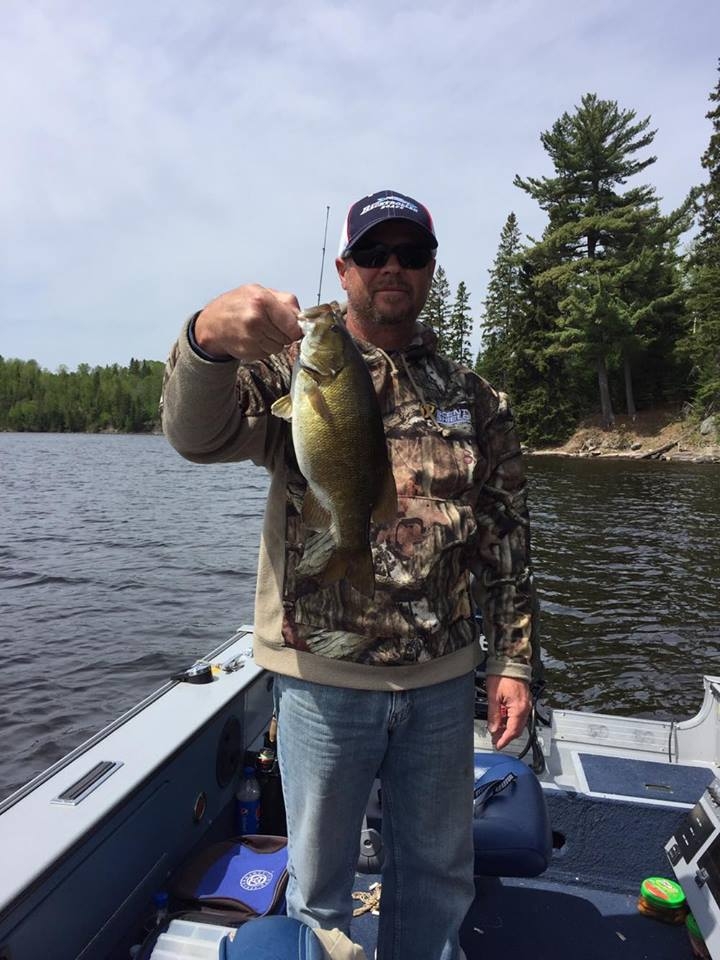 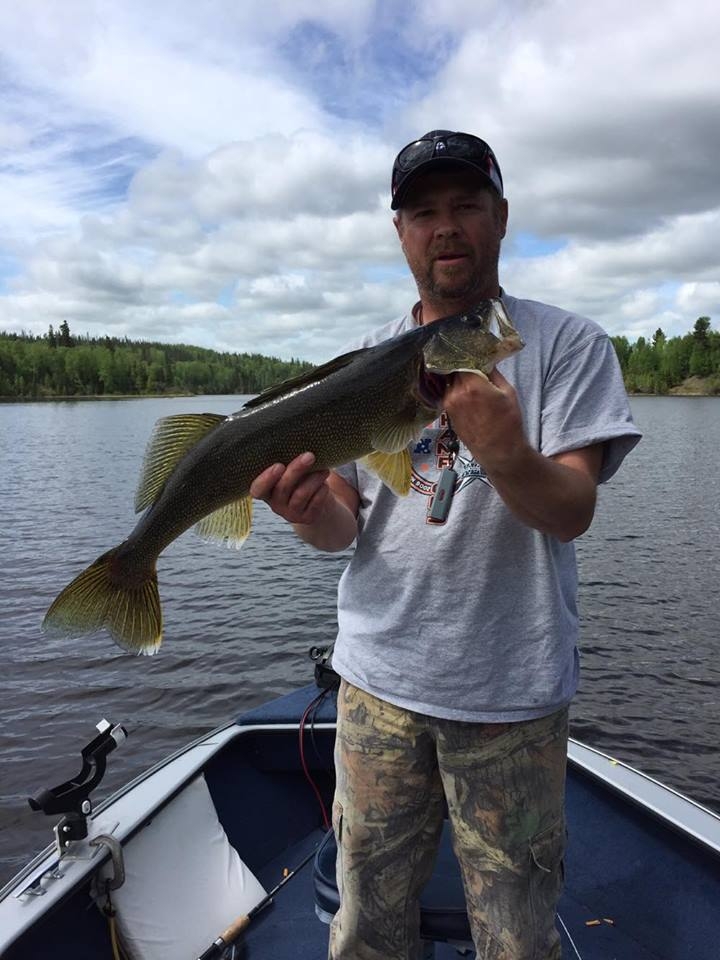 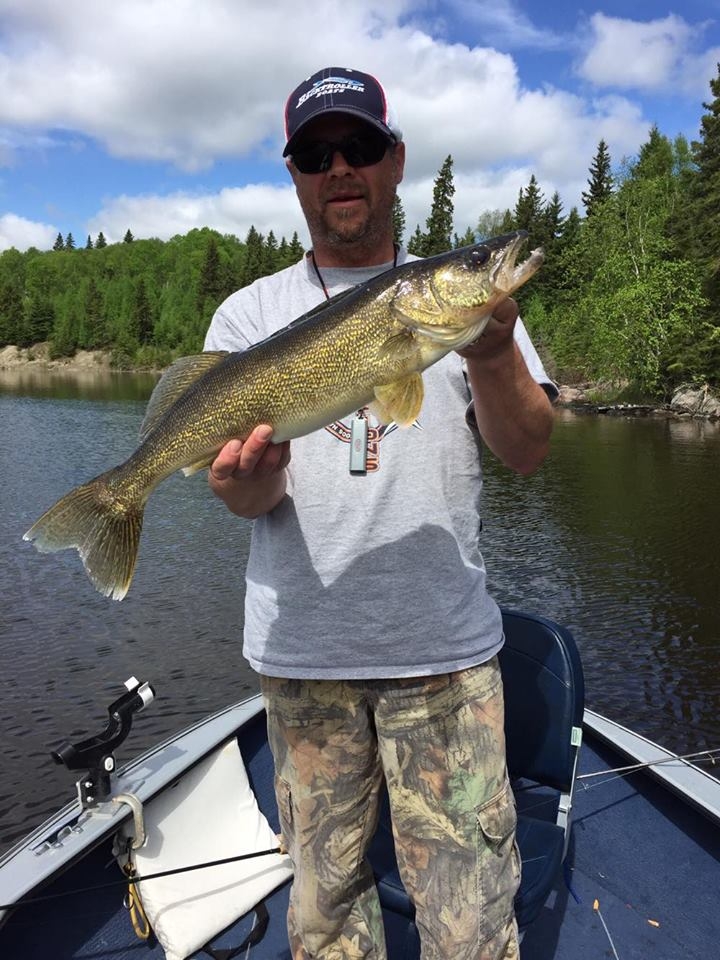 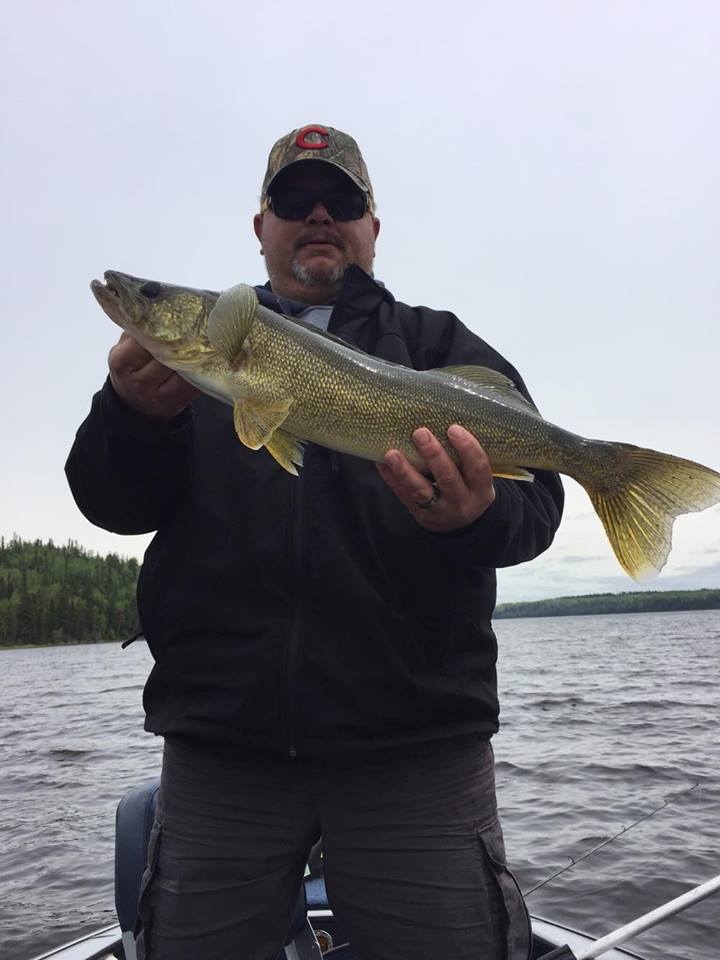 This group caught over 2,000 Walleyes during their week at Kapikik. The biggest Walleye was 25 inches. Their bait of choice was florescent orange jigs with minnows. They fished in 6-12 feet of water and anytime of day (except for mornings because they liked to sleep in). The best places to fish were anywhere there was moving water. They caught 34 Northern over 30-inches, including 4 at 38-inches. For Northerns they used spoons, crank baits, silver minnows and Walleye jigs. 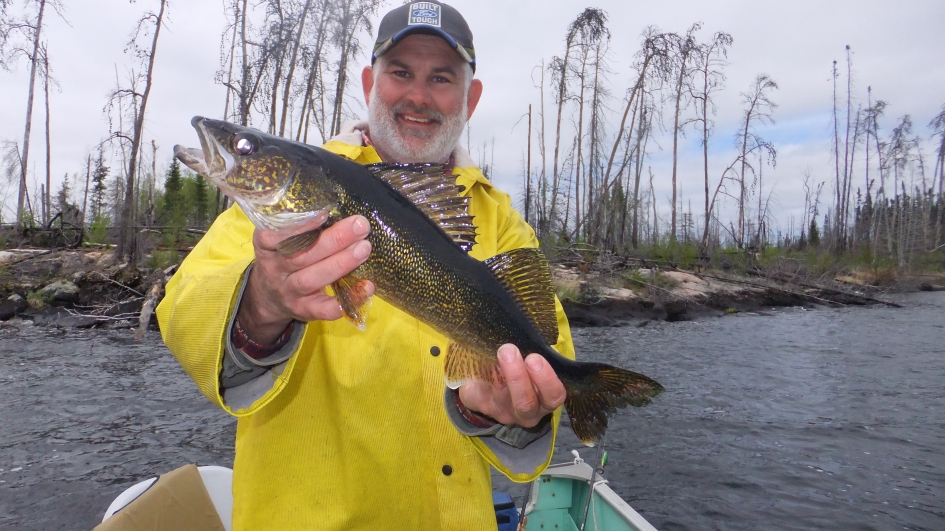 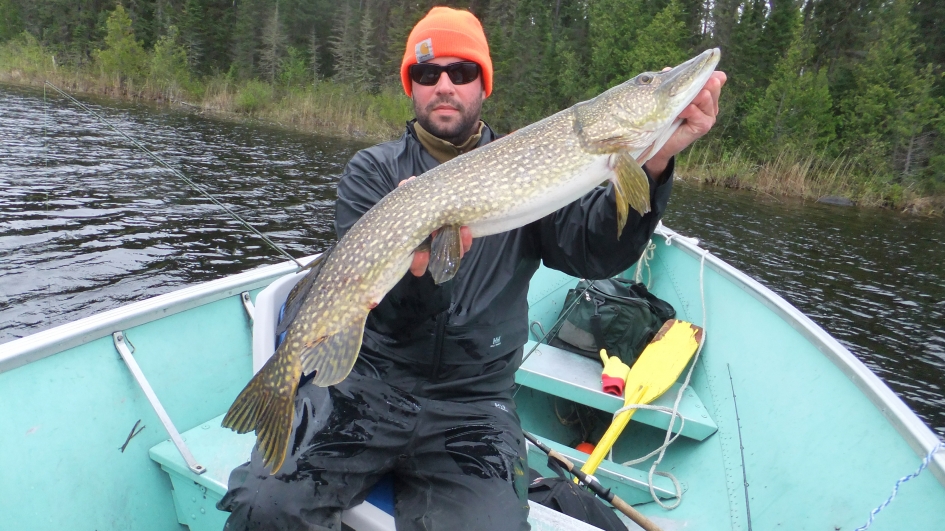 Our Fawcett group caught over 2,000 Walleyes in one week. They fished with jigs and minnows and their favourite colours to use were black, orange, black chartreuse, chartreuse orange, and pink. The Walleye were in 8-12 feet of water and along rocky shorelines and rock shelves. The best time to fish was morning and evening. They caught two 26-inch Walleye! The group caught about 400 Northern using Rapalas (chartreuse & black/Walleye). The morning was the best time and the best spots were rocky shorelines, rock shelves, and the river channel. Their biggest Northern was 40 inches.

Our group on Dobie reported a good week with LOTS of Walleye caught. They didn’t boat any real big ones this week, but got some in the 20 to 23-inch range. They found that the best time of day was in the morning and their favourite spot was at the river mouth near the cabin. The water temperature was in the 60’s and the Walleye were anywhere from 10-15 feet. They fished with jigs and (free!) minnows. It sounds like they caught a few Northern while fishing for Walleye and one was 35 inches. They were really impressed with the new outboard motors and the abundant supply of minnows. They all had a blast.

This small group of 4 caught 1,261 Walleye during their stay at McVicar. Their bait of choise was a 1/4 oz jig and a minnow and also a sassy shad. They found the fish shallower in 4-6 feet of water and they mostly fished the portages. They found the best time of day to be in the evening for Walleye and afternoon for Northern. They caught about 240 Northern and the best lure was curly tails. The largest Walleye caught was 24 inches and the largest Northern was 39 inches. It was a first time fly-in for one of the guys and he said that he caught more fish in a week that he would in several years back home.

Despit the long weather delay on their way home, this group had a great trip with good fishing as always. They are regulars at Wright Lake. Their biggest Walleye was 26 inches and they had two Northerns over 40 inches. They said that Wright Lake is a great fishery and the facilities are top notch.

This group found the Walleye bite to be a bit slow and they had to do some searching to find the fish. They had the best success with a minnow and jig in 5-12 feet of water. Tails and spinners on jigs helped to get more action. Even though the fish were soft biting, they ate fish every night for dinner. They mostly fished shorelines and the best time of day was in the morning. They had great success with Northern fishing. They boated 49 over 30 inches and 11 “Master Angler” fish over 40 inches. The largest was 43-inches. The found them in the shallows, shorelines, and reefs and the best time of day was in the evening. They enjoyed a great week of weather except for the last day resulting in a late pick-up. They said the improvements made at the Outpost are fabulous. The outhouse was the best they’ve experienced on a fly-in, they loved the new fish cleaning house and new walkways, and the new 4 stroke motors are excellent. 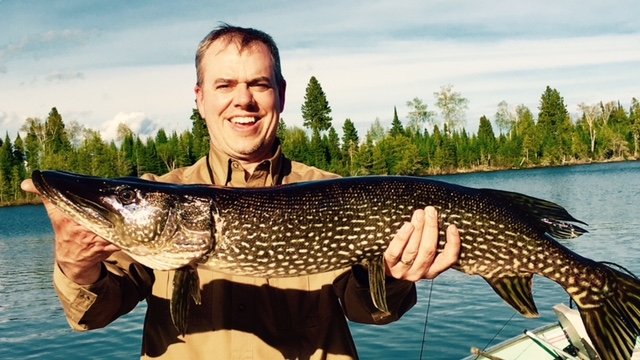 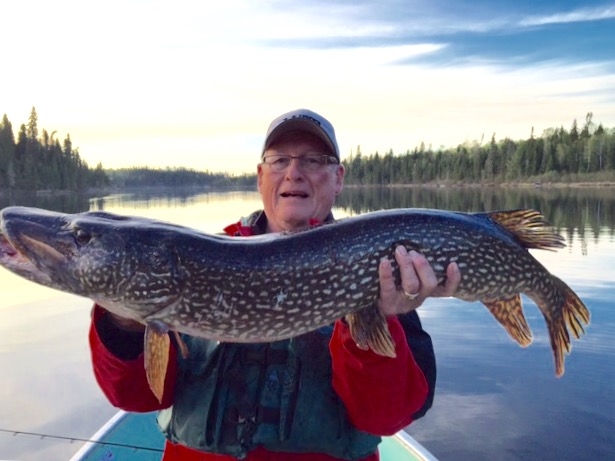 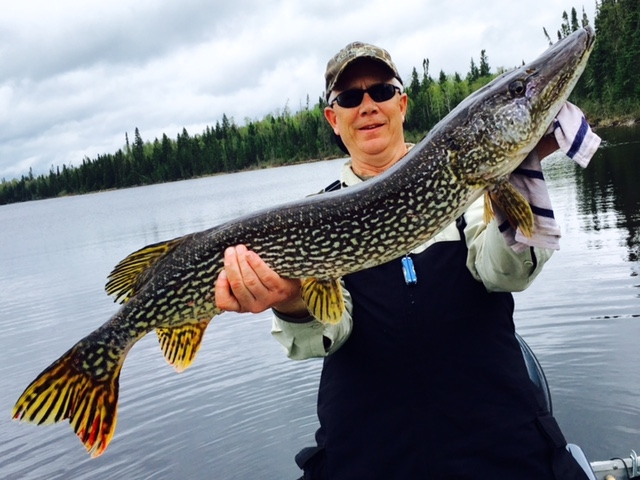 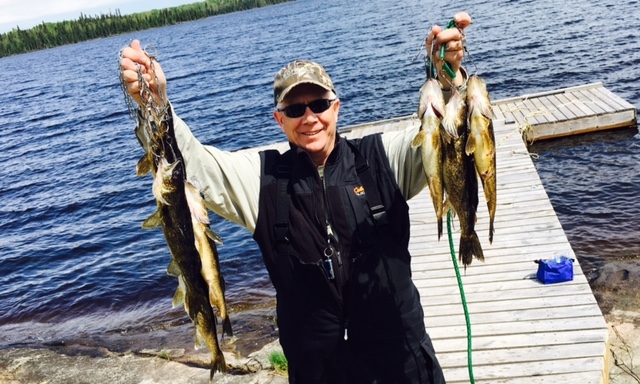