It was definitely a slower week for fishing on Cedar Lake! We fought with some nasty weather most of the week with a major cold front moving through. Rain, cold temperatures, and high winds were the theme for this week. The last two days were nicer, but very windy… after seeing hardly ANY Muskie, the one group finally boated a 51.25 incher on Friday night! Everyone did okay with Walleye and Crappie, but definitely not great! Hoping next week will be better with some stable weather in the forecast. 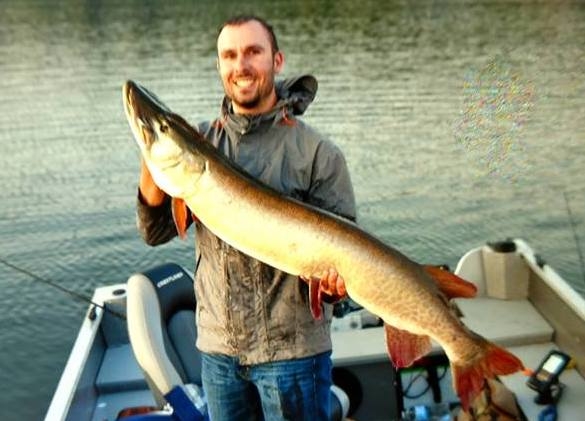 It was a quiet week at camp this week so there isn’t a whole lot to report. The Walleye were caught in the shallow reefs along with the Northern. There was no one Muskie or Trout fishing so nothing to report there. Next week is a busy one at camp so it should be a good report! Stay tuned!

This crew caught over 2,000 Walleye and 300 Northern! The fish were anywhere from 6 to 26 feet deep and could be found along shorelines, reefs, weedbeds, and of course in the moving water. The Walleye were biting on jigs with plastics, minnows, and night crawlers and the Northerns were biting on Dr. Spoons, jigs with minnows, Jake baits, and tails. The biggest Walleye in the boat was 27.5 inches and the biggest Northern was 39.5 inches. They said it was an excellent adventure with great fishing and accommodations!

This couple had a blast on Una Lake… they said it was a very relaxing and rejuvenating trip! They caught 127 Walleye with the biggest being 22 inches and 21 Northern with the biggest being 36 inches. The bigger Northern were found in Currie Lake along with some nice Smallmouth Bass! They threw just about anything for Walleye and as long as the baits were copper and brown tones… they worked!! From jigs and minnows/worms, to Jerkbaits, Rattletraps, and Crankbaits… the Walleyes hit just about anything. The Northern were hitting most of the same baits along with some Buzzbaits and Torpedos. The Walleye were along shorelines and reefs in 12-18 feet of water and the Northern were along shorelines and weedbeds in 5-15 feet of water.

These guys caught between 400 and 500 Walleye on Pusher Lake! They caught just about as many Northern with the biggest being 42 inches!! That’s definitely one of the bigger Northerns we’ve seen in Pusher Lake. Awesome! Their biggest Walleye was 21.5 inches long. They used jigs and minnows for Walleye and Rattletraps worked best for Northern. The Walleye were all over the place in 6-10 feet of water and the Northern were mainly along the shorelines and real shallow. They even got to see a moose swimming across the lake! Good time had by all!