The Hanson couple had an amazing week. Lots of fishing and wildlife! They saw a caribou and her calf swim across the lake. As for fishing, the mayfly hatch did slow it down a bit but these two still pulled out 532 walleyes and 27 northerns even though they were not being targeted. The best lure and bait was a jig and minnow. The hot spots were along shorelines in 5-8 feet of water during the morning and evening.

Due to weird weather and a mayfly hatch the fishing was a little slow, however these two still managed to reel in over 300 walleyes. Northerns were only caught on Curry Lake. The walleye seemed to bite better on an orange jig head with burn orange tail and minnow. The biggest walleye caught was 24.5 inches. Other big fish were a 23”, 22.5” and a few 21” walleye. The best spots to fish were the reefs in about 8-12 feet. The shorelines were not active. The biggest northern caught was a big 31 inches! 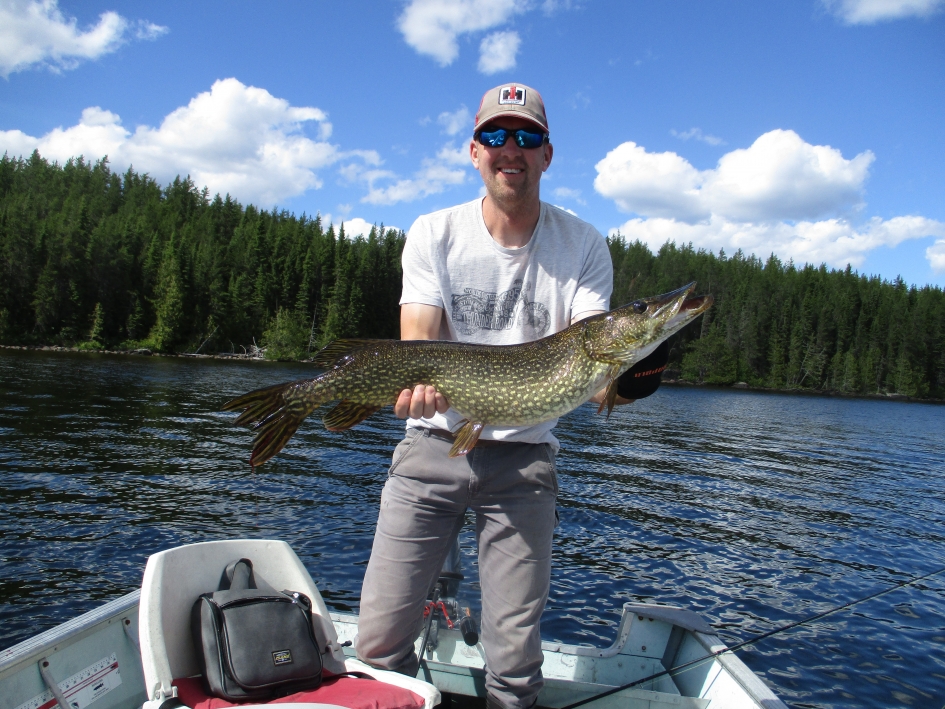 This group had fantastic fishing. They caught lots of Walleye and lots of Northern (by mistake!) They found several spots where all of the Walleye were quite large… they had lots around 17 inches and some over 20 inches, including a 24”. They said all the Walleye and Northern caught were quite healthy looking! They had two Northern over 40 inhces. They fished using jigs and minnows or grubs. They found white and orange jigs worked best on the bright days.

This group had fantastic fishing every day of their trip. They caught many Blue Walleye with the biggest being 26 inches. They caught numerous Walleye around 24 inches as well… a great time was had this week on Richardson!

Overall the group caught 320 fish, most of them were Walleye. The biggest walleye was 22 inches and the largest northern was 28”. Jigs with live minnows were the best bait and lures to use, jigging in around 9-12 feet of water along the shorelines and reefs during midmorning produced the best fishing. This group had a very good trip!

This Father & Son duo was pretty "blown away" by the fishing on Meen Lake. They've fished some of our other lakes in the past, but this one seemed to stand out! Between the two of them, they caught 708 fish! The biggest walleye was 22” and the biggest northern was 33”. A simple jig and minnow did the trick. Working the shorelines on the east end of the lake was the hot spot throughout the week. All in all a very good trip!

The Antenna group had lots of fun this week chasing Pike. They missed a 40 incher right at the boat! Overall the guys hauled in about 500 walleyes and 150 northerns using jigs & minnows as well as spoons. The best fishing was found to be in 8-10ft of water in either the morning or evening off the reefs and points. The group also saw 3 moose during the week! 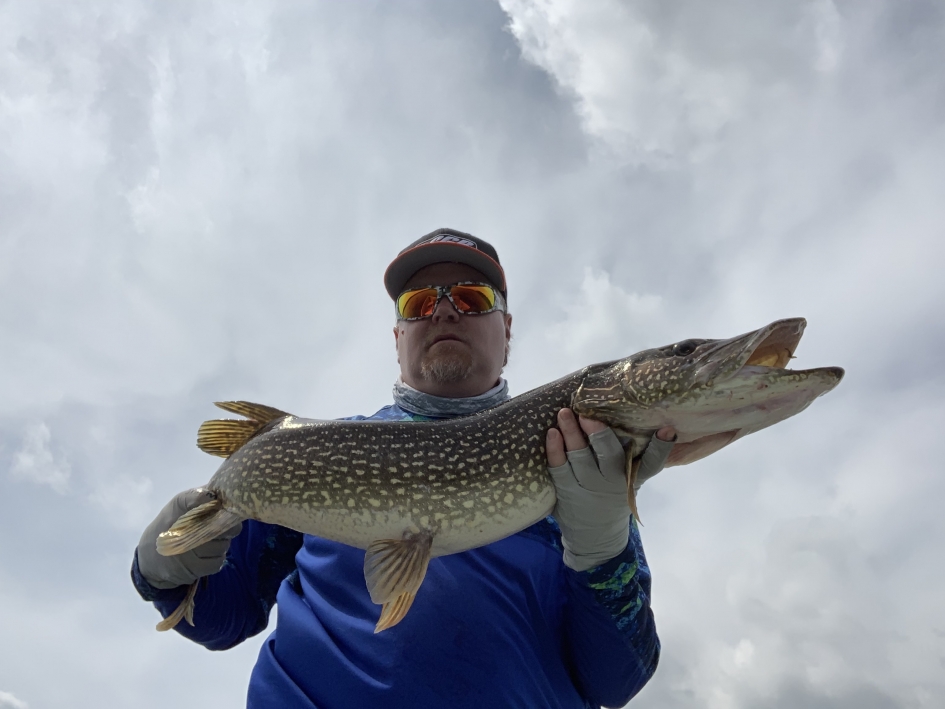 A rough start for the Kap group with the mayfly hatch and a few fronts, making it hard to find fish. However, the group still caught 700 walleyes and 35 northerns! The biggest walleye caught was 24”. The best lures were jigs and spoons. Walleye were found in the S-curve, outflow, and the channel behind the island. Northerns were found everywhere but mostly in the weed beds. Fishing was best in 8-11 feet of water in the early morning and late afternoon. Overall a very fun trip!

7 people out of the 8 in this group were “first-timers” to Canada and they had an outstanding trip! They said they will definitely be back! They caught hundreds of Walleye including the biggest one at 25 inches. Most of the Walleye were caught jigs and minnows, above the rocks jigging in 6-8 ft water. They caught around 300 Pike with the biggest being 42 inches! They had a few in the 40-inch range and a handful in the high 30's. Most of the Pike were caught in 6ft of water with weeds 2ft below surface. They trolled using spoons. Fishing seemed a little slow in the mornings and picked up in the afternoons.  They saw a ton of May flies, so the fishing was quite good considering! 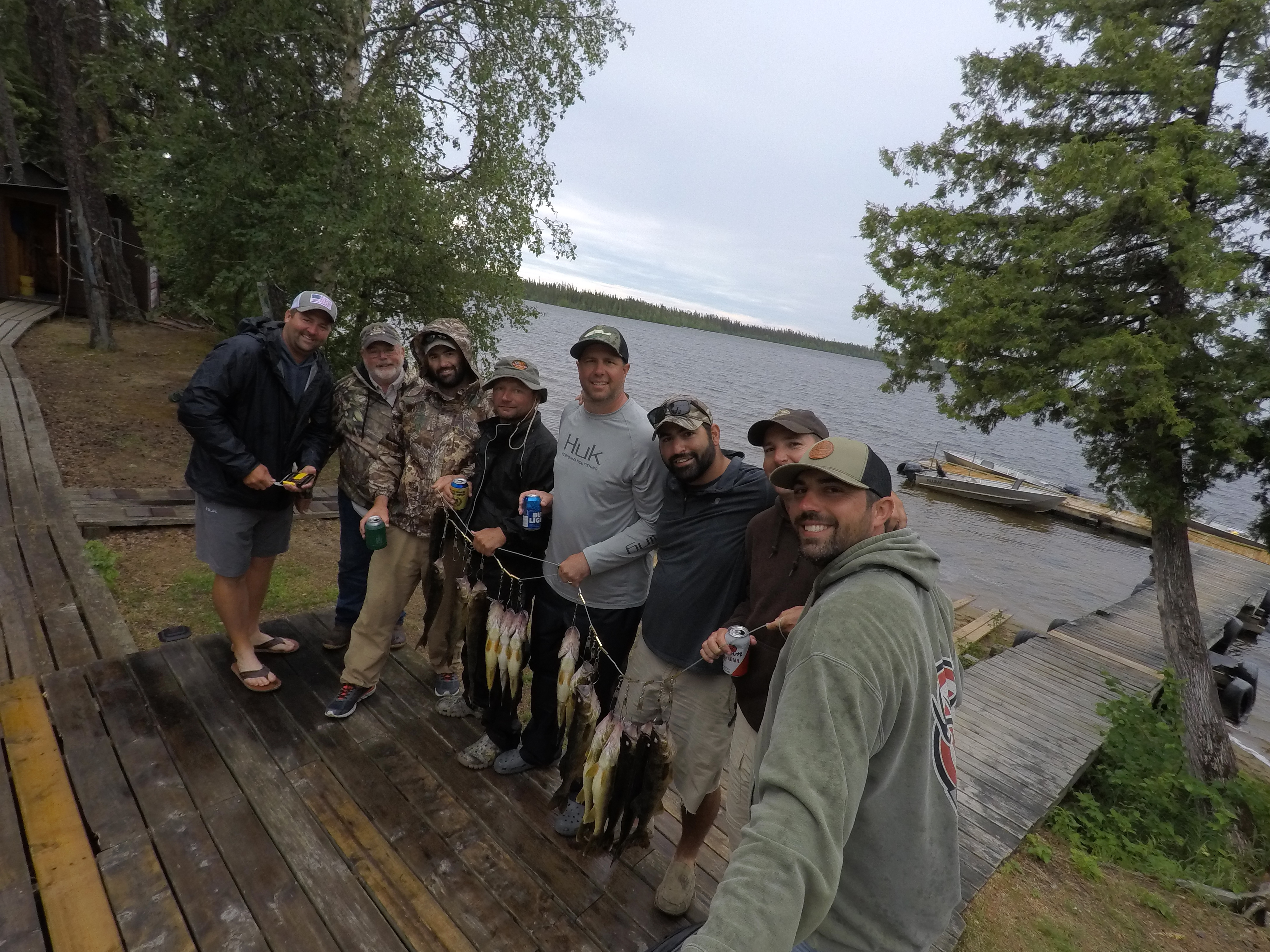 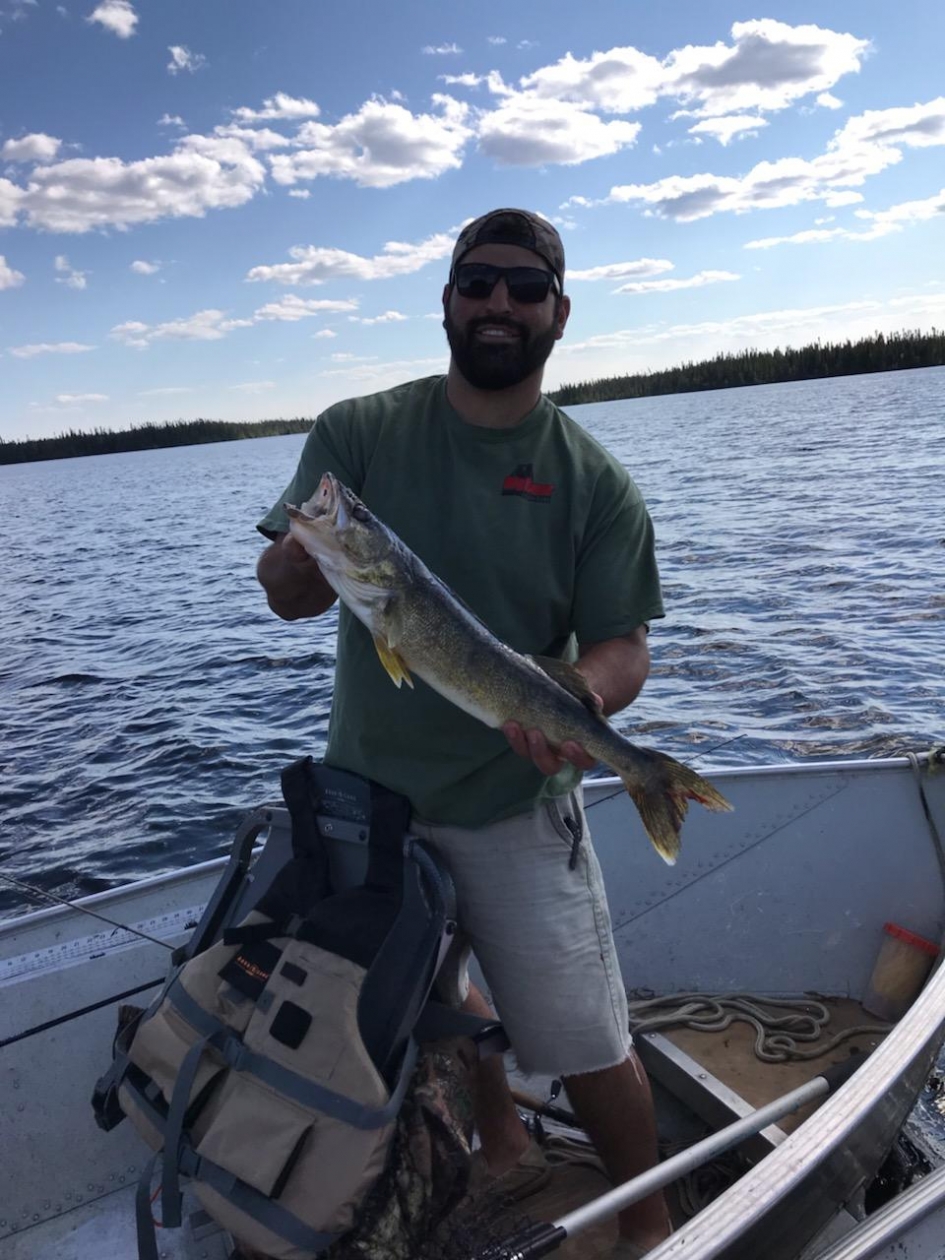 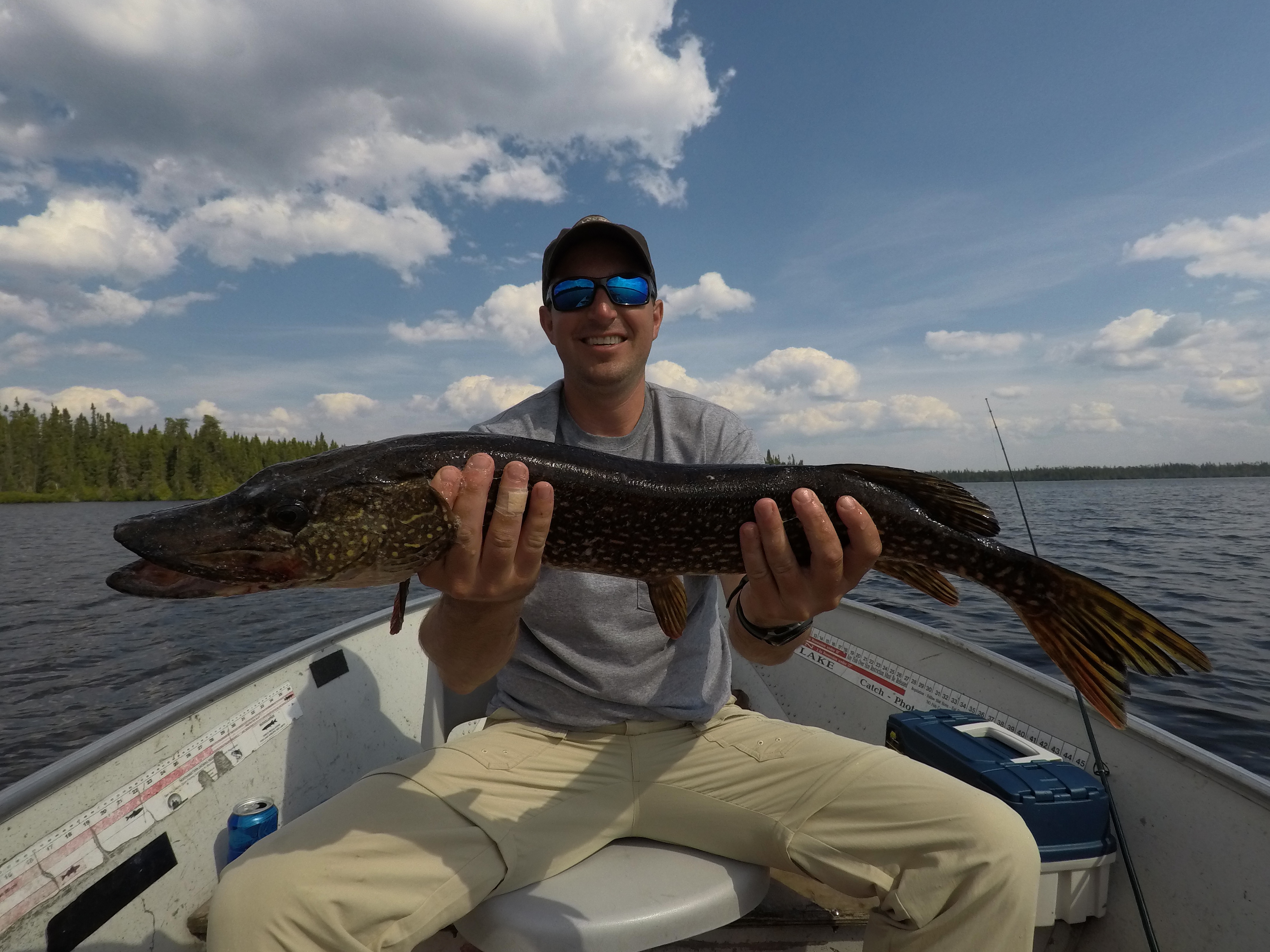 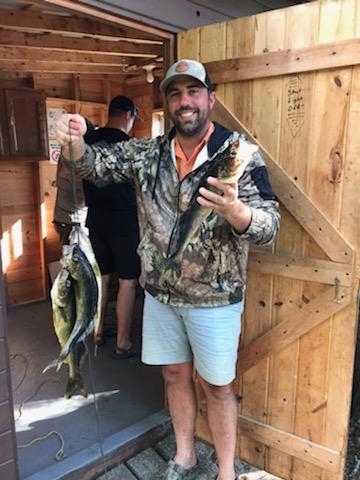 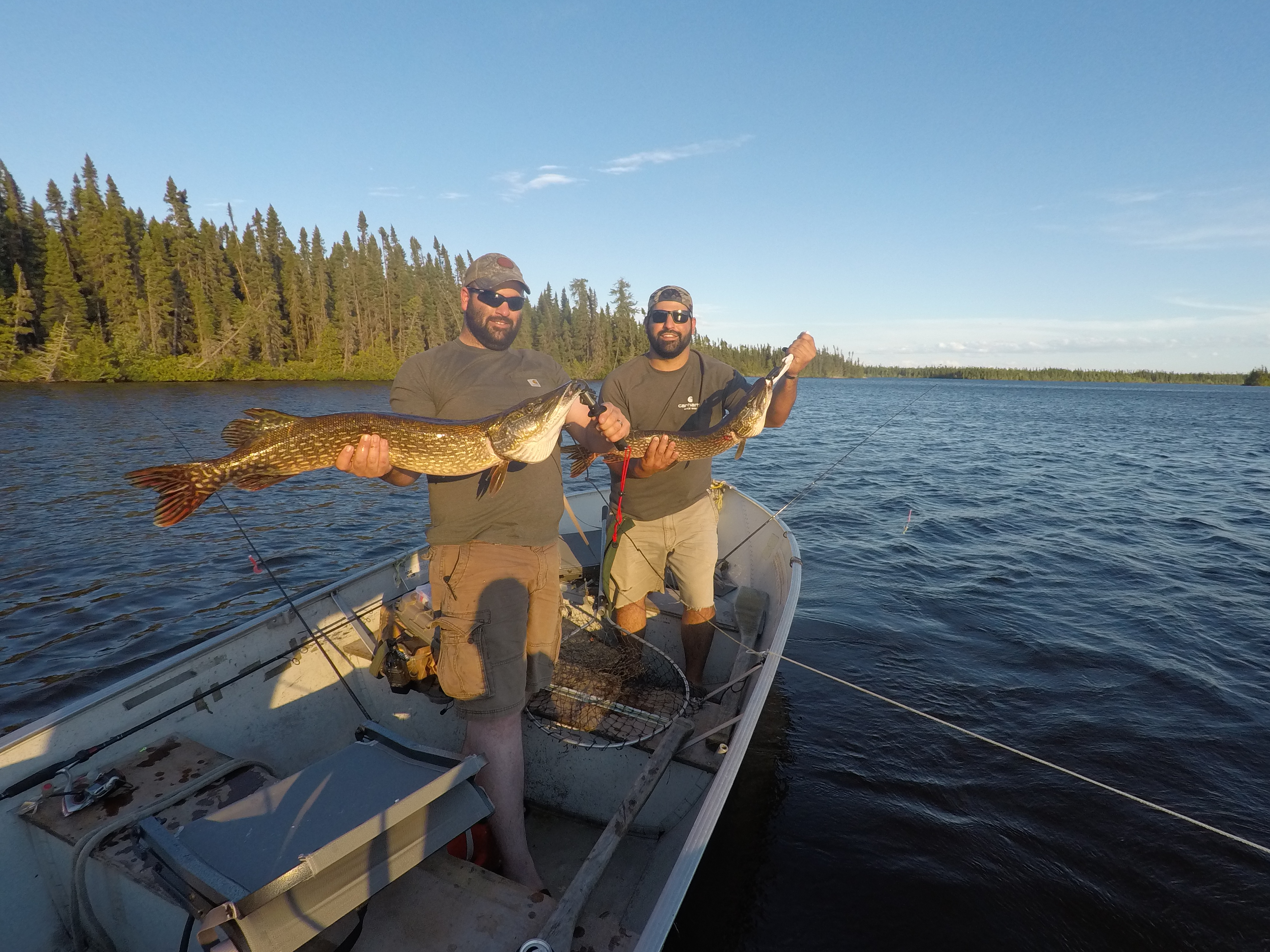 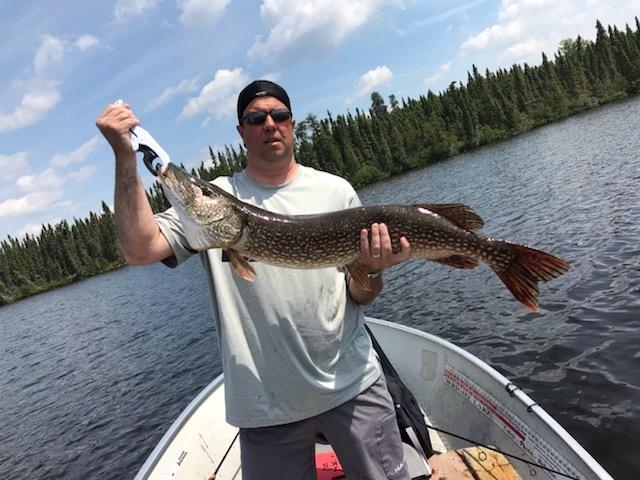 This couple had a nice stay at Okanse Lake and caught 262 walleyes and 39 northerns! They caught lots of walleye and northern off the dock in the morning using jig/minnow and twister tail. They said this lake is a walleye fish factory! They most definitely did NOT go hungry and really enjoyed their trip.

A lot of fun was had this week on Una Lake with about 300 walleyes caught and about 20 northern. The big fish were a 23” walleye and a 38” northern. Jigs and minnows were the best lure to use. Fishing was best in 4-15 feet of water and the best time of day was around 5:00pm or as the group said, “Happy Hour!”. The group also tried out Curry Lake and caught 30 bass. Overall a very successful trip.

The Richardson group did very well and caught 500 walleye with the big one measuring at 25 inches. As for northerns they were caught while walleye fishing. The best lures were green/pink jigs and minnows. The best fishing spots were along the points and shorelines in 5-12 ft of water. The group had a walleye on the end of their line and a northern attacked it part way through reeling it in. They ended up netting them both!

The group in Dorothy this week were finding northern and walleye on shorelines, reefs and weed beds! They caught 225 walleyes in total and 75 northerns total. The largest walleye was 19 inches and northern was 36 inches. Any time of day was good fishing and both northerns and walleyes were up shallow. Overall the group says they had awesome weather and a successful trip! 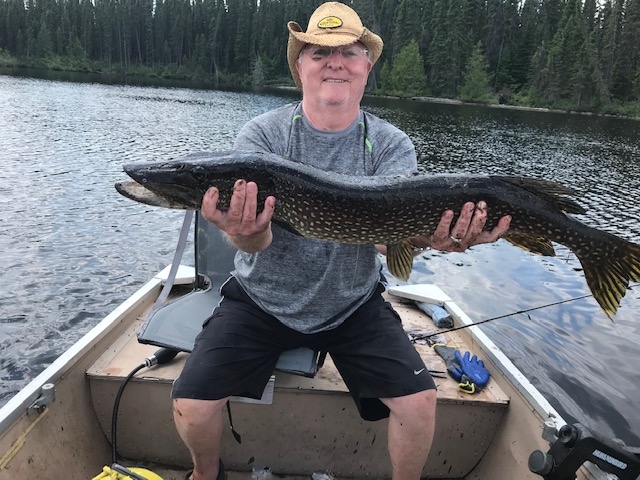 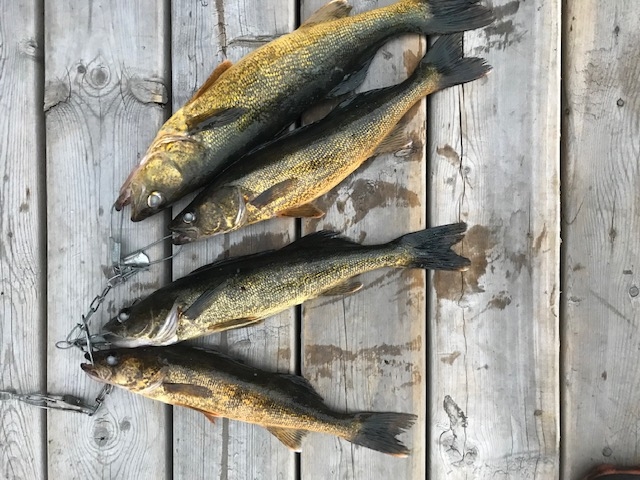 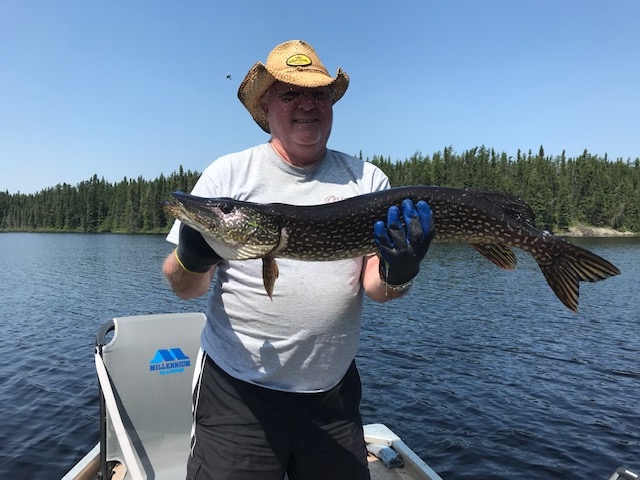 What a week for the Kam guys! Over 500 walleyes caught and the biggest was 25 inches. A jig and minnow were the best lures to use. Walleyes were found on the reefs mostly in 7-8 ft of water during the evening. The northern fishing was good as well with around 40 being caught and the largest measuring at 33 inches. They were in shallow in about 5 ft of water. Best time of day to fish them was in morning.

The Antenna group this week caught 700-800 walleyes using bright coloured jigs with minnows. The biggest was measured to be 22 inches. The group found that the map provided by Clark’s was very accurate for this time of year. Walleye were also found in 7-11 feet of water. As for northerns they caught about 100 and the largest was 37 inches. The best lures and bait were a jig in minnow, similar to walleye fishing. They were also being caught in 7-11 feet. For both northerns and walleyes the fishing was good all day, every day. All in all a great trip for the Antenna Lake group!

The group of 5 caught approximately 500 walleyes each with the largest being 25.5 inches. A minnow and jig was the best bait and lure to use. The group says that the walleyes were everywhere but mostly behind the island across from the cabin. The mornings and late afternoon were the best times of day to fish. The group caught some northern too with some measuring in at 40.5, 39, 36, 35.5 inches. Overall an awesome trip for these guys!

Another "slower" week for Kapikik Lake (again, due to the May flies). The group did still manage to bring in 500 walleyes and 75 northern. Both were in about 4-6 feet of water and were caught on any type of structure. A jig and minnow worked best for walleye and daredevil spinners for northerns. Even though the fishing was slow the group says the cabin and accommodations were great and still had a fun time!

This group had been to McVicar a few times in the past, but noted the fishing was slower this time around. A jig and minnow were the ticket to catching walleyes in 12-35’. For northerns, a daredevil lure worked best in 10-20’. Fishing was best off of the rocky shorelines for walleye but the northerns were found in the weed beds.  The big fish of the week were a 24.5inch walleye and a 31 ¼ northern.

These guys had a great time on Cook Lake! They said it was a very relaxing trip and they saw lots of wildlife including a moose, caribou, and a bear! They caught about 200 Pike with the biggest being 35 inches… they even lost a fishing rod to one of the Pikes! The best lures were pikey minnows, rattle traps, mepps, shad raps, and minnows with jigs. They caught about 600 Walleye and the biggest was 20 inches. They used minnows with buddy rigs, jigs, rattle traps, and shad raps. All fish were found 4 to 11 feet deep on shorelines, reefs, weedbeds, and on the portage lake.

This is probably the first time the fishing was reported to be “slow” on Pusher Lake! The conditions must not have been right or the fish just weren’t hungry. This couple had a good trip, but only caught about 154 Walleye and 58 Northern. The fish were scattered and caught in all different spots anywhere from 6 to 15 feet deep. They were biting consistently throughout the day, but not very “fast-paced”. They mainly used leeches rather than minnows.

The group at Grace Lake this week caught 155 walleyes using crankbaits and minnows on jigs. The big walleye of the week was 22.5 inches. The group also caught 219 northerns using crank baits and bucktails. The biggest was 37 inches. Both walleye and northern were being caught in 4-12 feet. The walleye were sometimes found a little deeper in 16 feet. Majority of fish were found on the shorelines.