It was an awesome week at Snelgrove for these two… they caught so many walleye they lost count! The biggest was a 24.5 inches! They didn’t target northerns. The walleyes were on the reefs and rock piles. The best lure and bait was a jig and minnow. They loved their trip and had a great time!

An awesome week at Otatakan Lake! This group of 4 caught a total of 926 walleyes using leeches and minnows, jigs, and crankbaits. The best depth for fishing was 5-20 ft. The biggest walleye caught was a 22 incher. The fish were biting when trolling the shorelines, reefs, weed beds and root river. For northern fishing they caught 96 with the biggest being 30 inches. They were biting on pretty much anything at any depth. The guys say that they spent a lot of time trolling with shallow and deep crankbaits and jigging on points/reefs.

This group mainly focused on walleye fishing and managed to catch about 500 with a big 28 incher being the largest! The best bait and lure were a ¼ oz jig and minnow or worm. The hot spots for the trip were the southern reef and right off the dock! The best time of day to fish was in the morning or the evening.

Both the walleye and northern fishing was beyond expectation for this group! They averaged 50 walleye a day and 20 northern pike per day. They used mostly lindy-rigs and jigs/minnows to catch all their fish with the exception of using musky baits to fish for northern.  The fish seemed to be on the shorelines, reefs and weed beds. The biggest fish caught on this trip was a big 23 inch walleye and a massive 41 inch northern! By the end of the week the guys had eaten fish for supper every night and look forward to coming back! 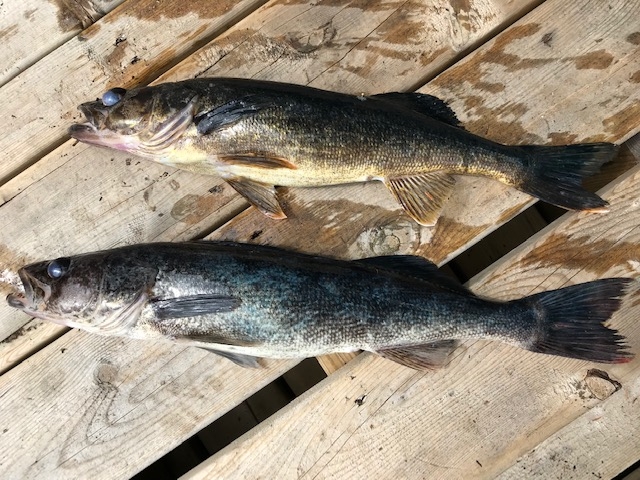 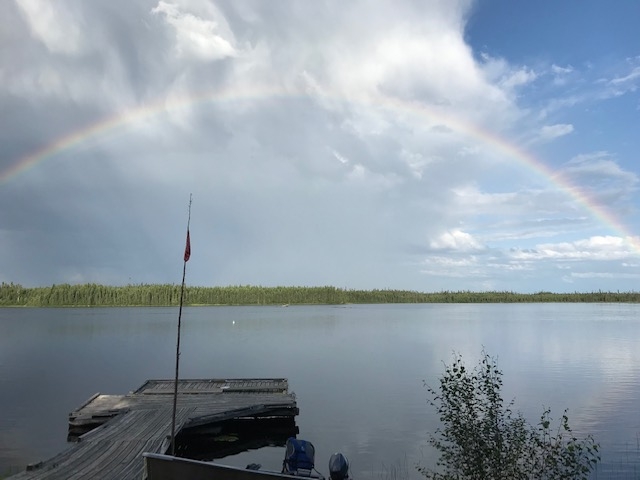 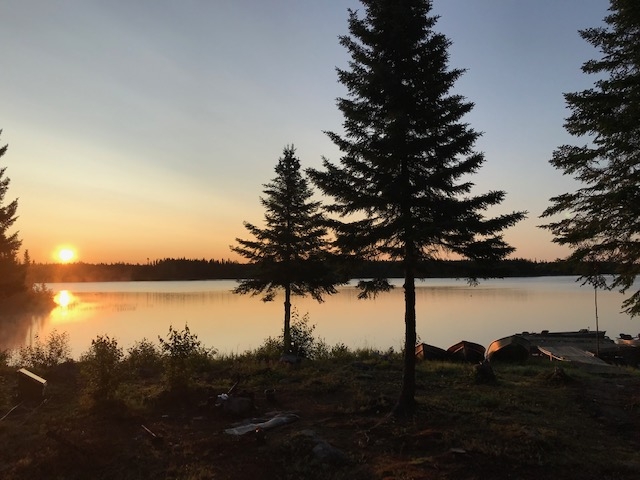 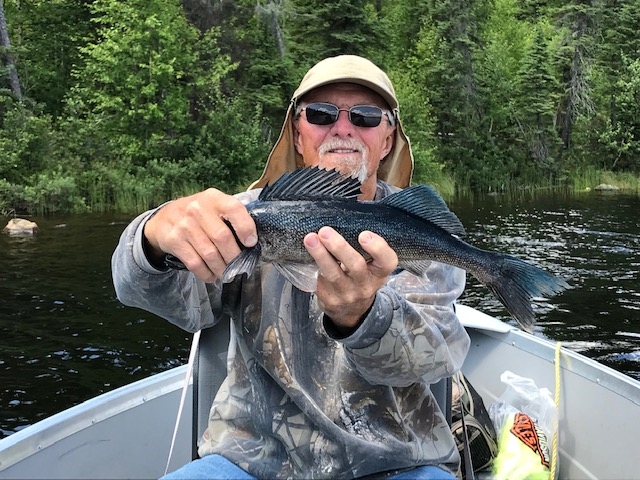 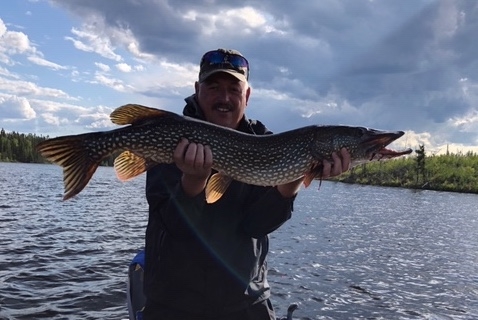 This week at Una it rained 5 out of 7 days for this group. However, in spite of unfavorable weather conditions the group still caught lots of fish and had a great week. They caught tons of walleyes and pike. Fishing for walleye they used a ¼ oz jig with a minnow as bait. Spoons were used to northern fish. Most of the walleyes were caught on the points where as the northerns were in the weed beds and some shorelines. The group says they had a great week!

First trip to Kapikik for this group of six. They caught about 800 walleye and 200 northerns. The biggest walleye was 23 inches and the biggest northern was 36 inches. Walleyes were on windy points, bars and shorelines. Very few walleyes were caught in “moving water” locations. Most fish were caught on jigs and minnows. Fishing was good in 4-25 feet. A very good trip overall!

These two caught about 70 fish on Dorothy Lake. Their biggest Walleye was 17 inches and their biggest Northern was 25 inches. They caught fish everywhere on the lake and the best bait was a jig & minnow combo.

This week at Upper Wapesi the group caught “lots and lots” of walleyes and had their limit within 10 minutes! They say there were lots of 20-22 inch walleyes. They used mainly jigs with minnows as well as some homemade rigs that they made last winter. They fished in 12-18 feet, mostly on the west shoreline. Northern fishing was awesome for them as well with many 26-30 inch northerns caught! Spoons and crankbaits were used along shorelines and weed beds. Also, these guys got some incredible pictures of Eagles that we just had to share! 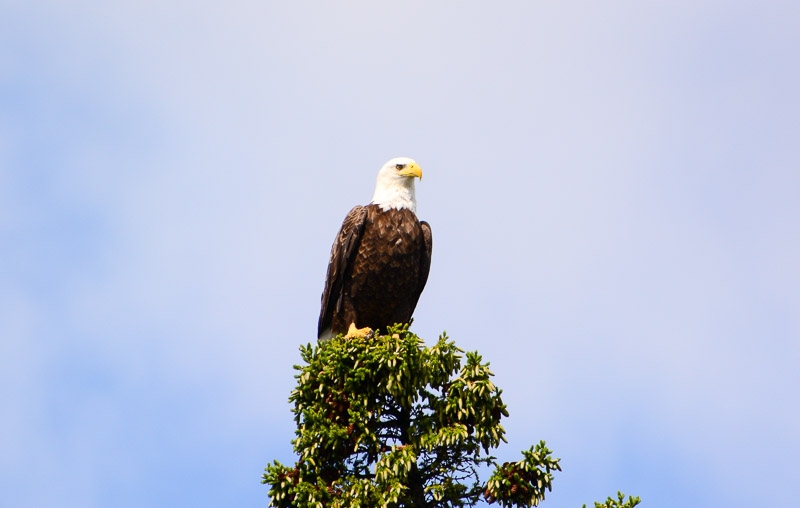 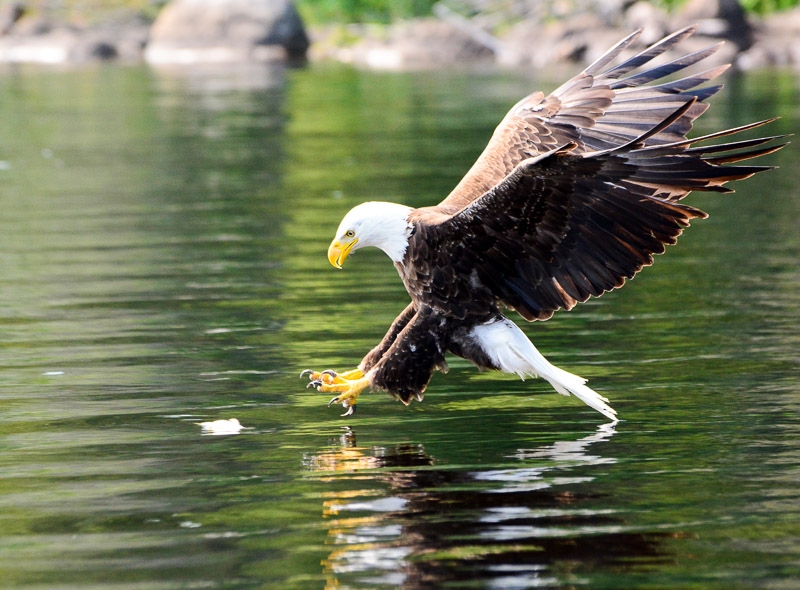 These 4 had a great trip to Fawcett Lake. The first day of fishing, they caught many Walleye in the 19-24 inch range. After that, the average size was 17-18 inches… that’s a lot of big & healthy fish! They figured they caught around 1,000 Walleye. They even caught & released the 20 pound Northern that was apparently living under the dock! Sounded like a fun and exciting trip to Fawcett Lake.

This week at Upper Wapesi the group caught many fish mostly on reefs, shorelines and lots of BIG walleyes! Especially on the last day, they caught almost 30-40 walleyes over 20 inches! The biggest was 25.5 inches. The depth to fish varied. Overall a very good trip!

The McVicar group caught 692 walleyes this week with a couple 24 inchers and one 25”. The best bait and lure were jigs with minnows. As for the hot fishing spots for the week the guys found the walleye on points and around islands with lots of structure. For northerns the guys caught 62 but were missing the northern fisherman of the group this year! They caught most on a jig and minnow. All fish were caught anywhere from 5-15 feet of water.

It was their third time to Kapikik Lake for this group of 6. In total this year they caught 2009 fish. Of that 1950 were walleyes and the rest were northern. The group mainly targeted walleye with the biggest being 26.5 inches with a couple just under 26” as well. They used jig/minnow and jig/plastics. The best fishing was in 8-14 feet of water on the shorelines and reefs or any moving water.  Northerns caught were mostly when fishing for walleye. The group says every year they find new spots to fish and new areas to explore. Always a great experience!

At Una Lake this week the guys caught 80 walleye on the shorelines/reefs in 6-10 feet of water. As for Northern they caught 15-20 with the largest at 39 inches. These two had a fun week and say it was an awesome adventure!

These guys caught 380 walleyes with the largest being JUST under 26 inches! The guys caught majority of the walleyes in the weed beds at the south end of the lake as well as right off the dock in about 7-10 feet. The northerns were caught in the same areas as walleye on a jig and minnow. The biggest was 25.5 inches. The group overall had a great week!

These two had a fantastic time on Antenna Lake. They said we have a piece of God’s Paradise there and we couldn’t agree more! They caught around 500 Walleye and a number of Pike, although it doesn’t seem like they were targeting them. They fished with Little Joe’s and jigs with minnows mainly along the shorelines in 6-12 feet of water. Their biggest Walleye was 21 inches and their biggest (two) Northerns were 35 inches. The Walleye bite was best in the morning and late afternoon and the Northerns were most active mid-morning.

It was a first time on Upper Wapesi for this trio and they had some incredible Walleye fishing with over 1300 caught and the biggest being 27 inches! They said the minnow supply made all the difference. They also really enjoyed the accommodations at Upper Wapesi. They didn’t fish Northern at all. For Walleye they stuck with jigs & minnows and fished the shorelines and reefs in 12-18 feet of water. They said the best time of day was “morning, noon, and night”! 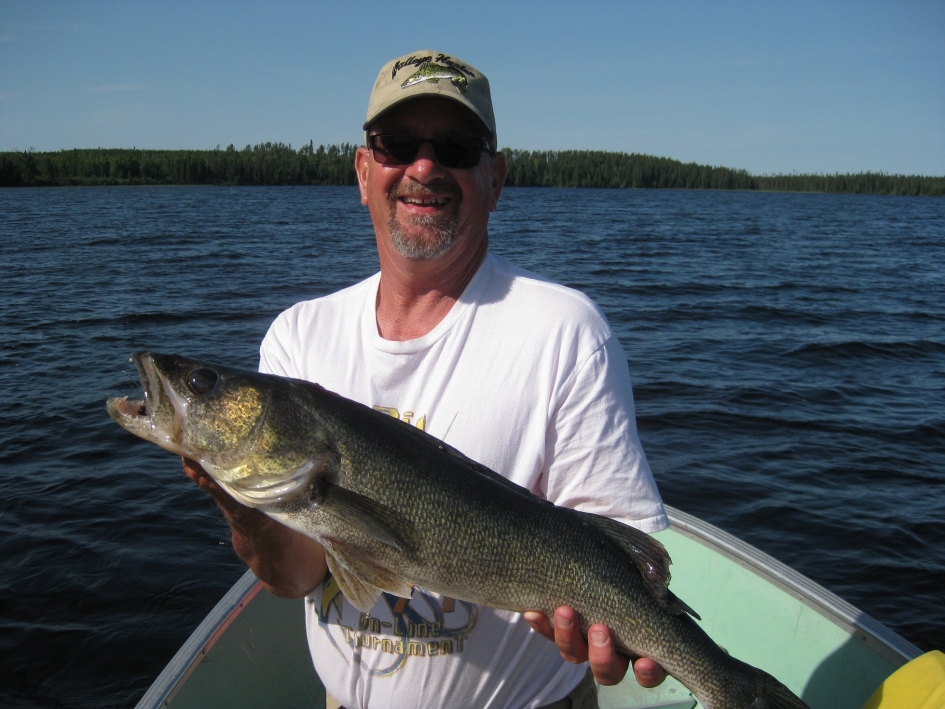 This Father & son duo had a great time together at Pusher Lake… the best part was spending time together! His son caught about 100 Northerns… many small ones, but a few that were in the mid 30’s. They caught at least 60 Walleye per day and the biggest was 23 inches. It sounds like the dock fishing was fantastic as well!