This group consisted of a father, son and 2 teenage grandkids. It was Canadian fishing trip number 81 for the Father and he said it was great!! They caught all the Walleyes they wanted, but mostly smaller ones. They had two 24-inchers, which were the biggest. They had great weather all week once the Monday storm passed through. They noted the upgrades at the cabin and said “Clark’s have some of the best outpost camps in Ontario. They include an upgraded cabin, good appliances, new fish cleaning/storage shed, sauna and large outhouse.” They said they had great fishing off the dock, near the reef to the south, and the falls at the inlet on the far north end. In closing they said, “Camp checks were on time and frequent and the minnows were always available!  Thanks to Wayne, Karla and Meagan for the great trip.”

This group of 4 enjoyed Bertrand Lake. They brought in 150 walleyes and the biggest was 24.5 inches. The best lure and bait was a jig and minnow. They caught 50 northerns and the biggest was 42 inches! Northerns seemed to be biting mostly on crankbaits in 8-15 feet. All in all, it was a great week!

The end of July at Grace lake brought some awesome fishing for our guests. They caught 650 walleyes and 100 northerns. They fished mainly the weed beds and rock piles in 8-16 feet. Fishing for walleye was best in the evening and fishing for northerns was best in the morning. The hot lures of the week were spinners, jigs/minnows and rapalas!

This group of “McVicar Regulars” caught 1750 walleyes total! The biggest was measured at 24 inches using a jig and minnow. The walleye were in about 17-28 feet and the best time of day to fish was in the morning. They did not target northerns.

A great week of fishing at Una for the first week of august. They got 960 walleyes using a jig/minnow and fishing along the shorelines and on reefs. The biggest walleye was 23.5 inches. They pulled in 20 northerns and the biggest was 40 inches also caught along shorelines and on reefs. All fish were found in 6-15 feet of water. Best time of day to fish was in the AM and the PM. Middle of the day got too hot. Overall a very good week!

This couple was blown away at how hot the weather was during their stay on the island. Not a lot of wind and about 90-95 Fahrenheit throughout the week. This slowed the fishing down a bit but they still caught a couple hundred walleyes on the portage lakes the biggest was 24 inches. The best fishing was on rocky points, shorelines and any rocky structure in about 12-20 feet. Fishing stayed consistent all day. As for northern fishing they caught 75 and the biggest was 34 inches. Northerns were hanging out along the weeds and shorelines. They didn’t try for Lake Trout.

These two couples had a great week at Snelgrove. They caught over 500 walleyes and around 33 northerns. Both were being caught somewhat shallow in about 6-15 feet. The best lure was a jig and they found worms and minnows worked well. The best time for fishing was in the morning and evening. The fishing location was dictated by the wind direction as there were many windy days.

Despite the weather challenges, this group of 4 caught a few hundred Walleye including a 26-incher. They had lots of fun and laughs and said the cabin was great. They caught over 100 Northern with the biggest being just shy of 40 inches. The best bait for Walleyes was gold/white jigs with minnows and the best spots were shorelines and weedbeds. 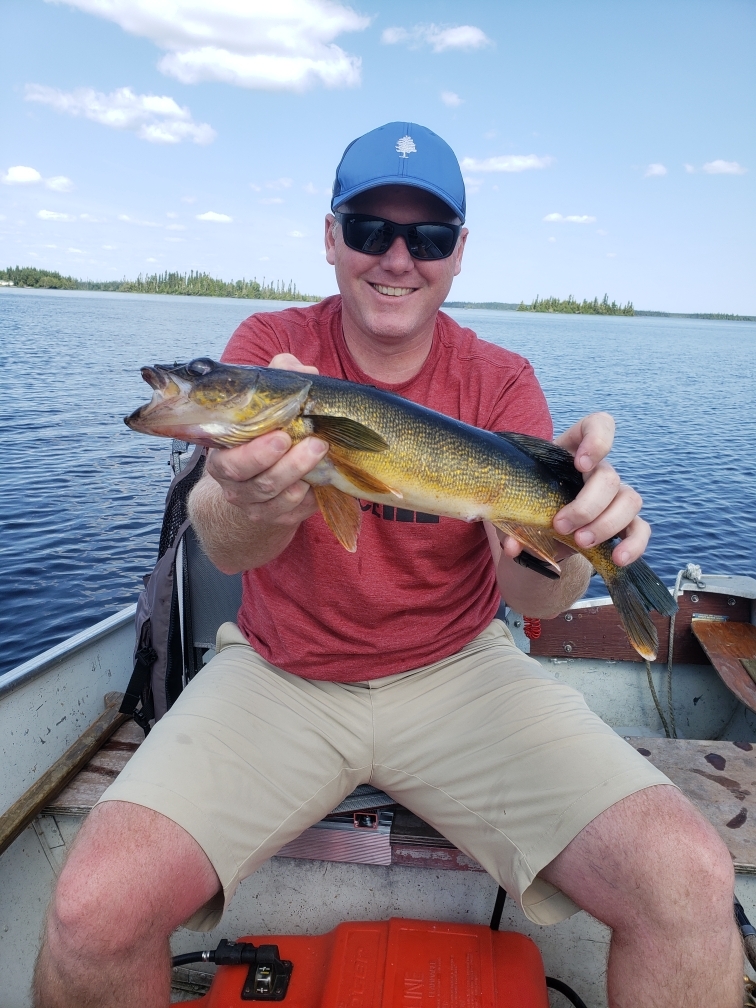 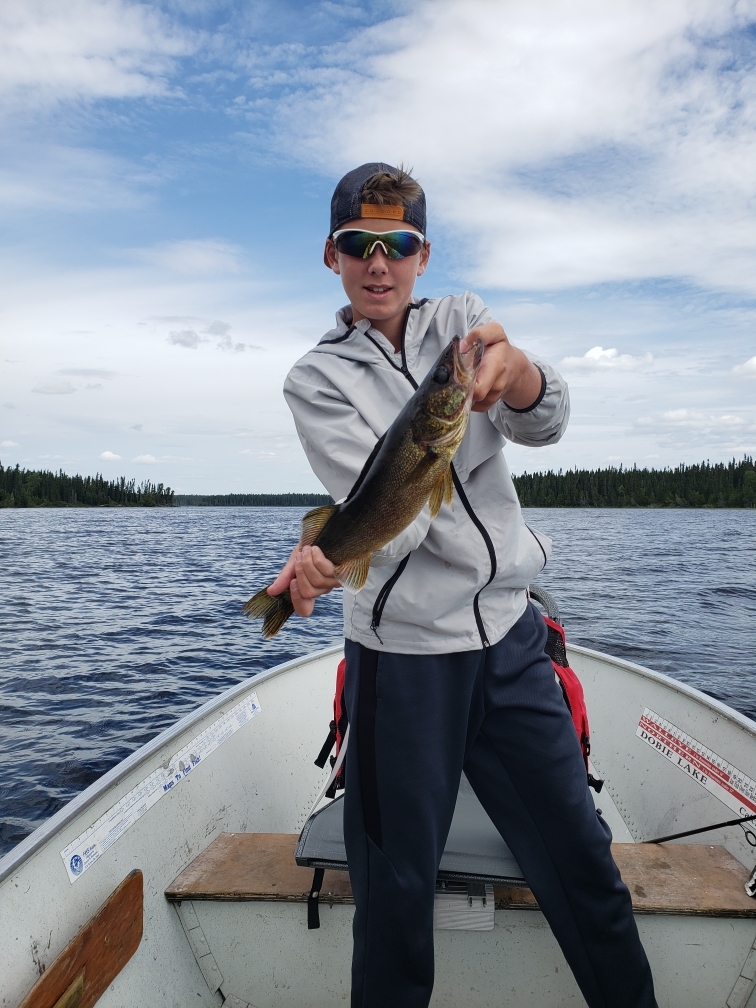 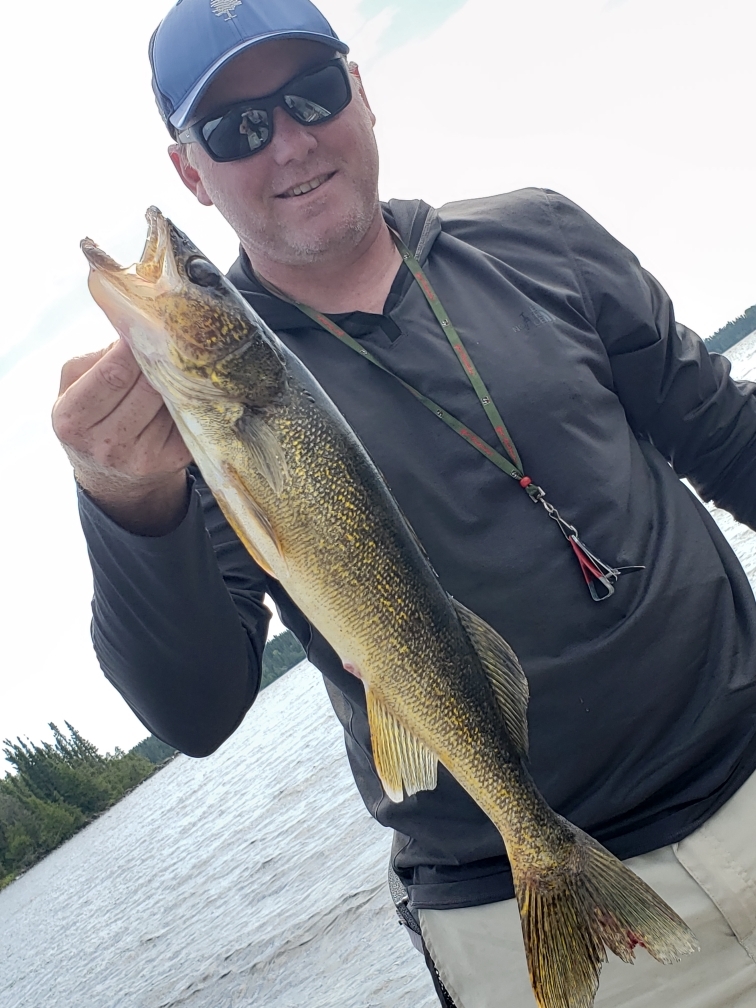 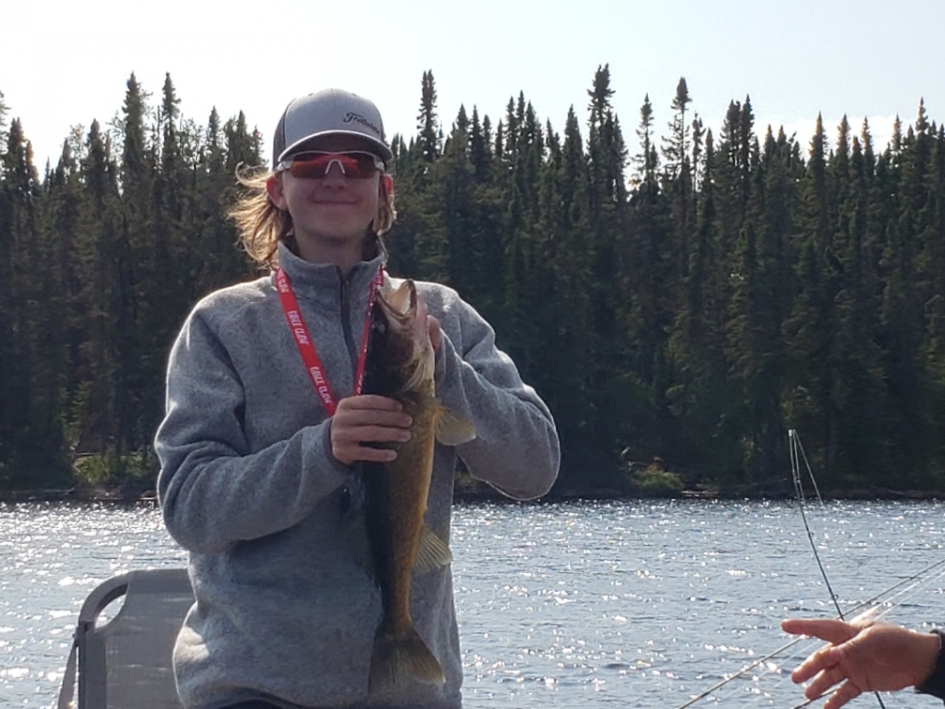 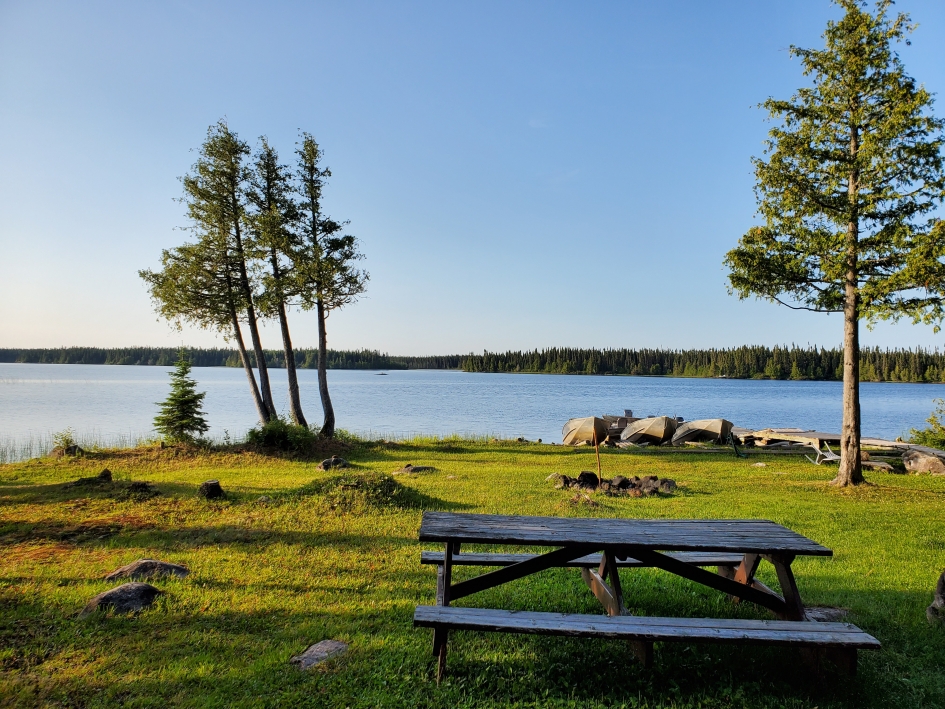 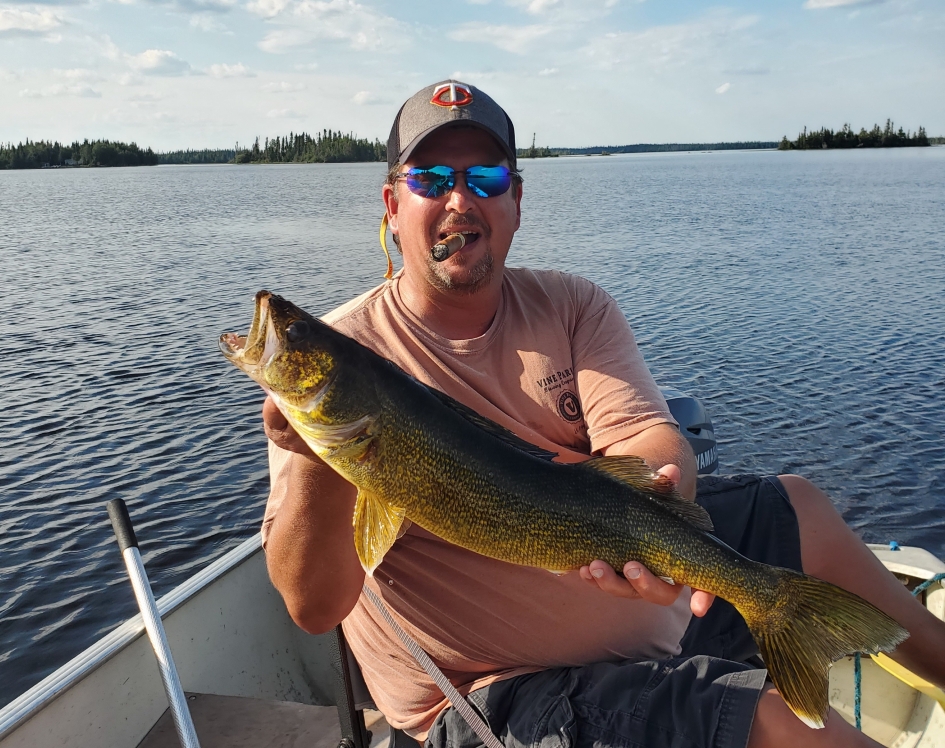 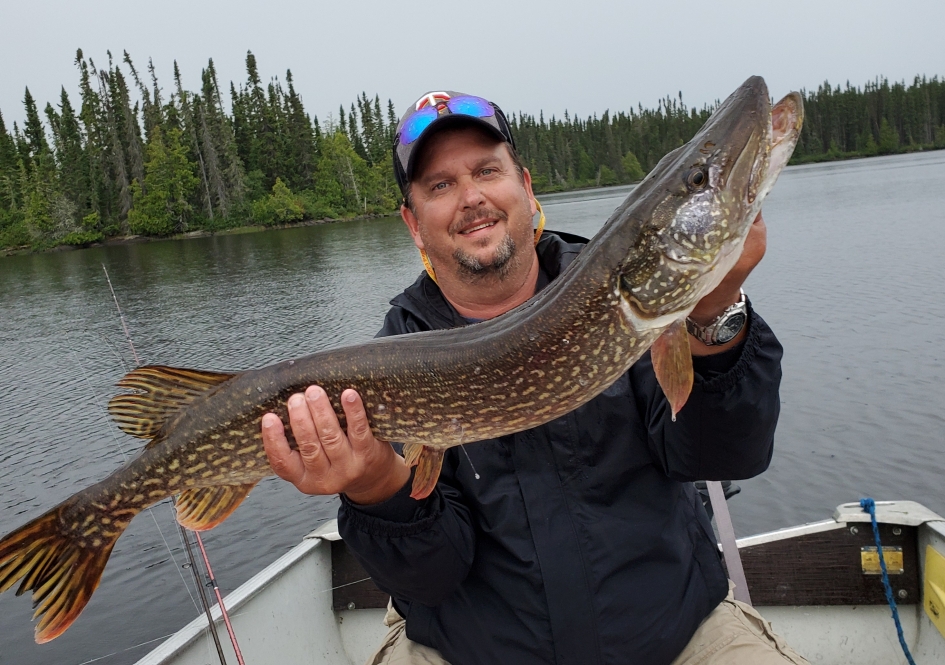 This week at Kam the guys caught approximately 1500 walleyes with a 24 incher being the biggest. Any colour jig worked as long as there was a minnow on it! The guests fished mainly the spots marked on the map and the fishing for walleye was consistent throughout the day. While jigging for walleye they caught 12 northerns. The best depth for fishing this week was 16-20 feet. It was their first time with Clark’s and their closing comments were “outstanding accommodations, outstanding fishing, and outstanding owners and staff!”

This group of 4 had an awesome week at Kapikik. The fishing was unlike any fishing they’ve ever seen in August. The guys pulled in 1295 walleyes with the largest measuring in at 23 inches. They did not target northerns however they caught 28 while jigging for walleyes. The largest was 33 inches. The group found the best bait were minnows/leeches on a jig. Fishing was best in the morning and evening in about 4-10 feet in moving water.

The group at the Narrows this week fished one of the portage lakes for walleyes; Duck Lake. Using an 1/8 oz jig and minnow they did pretty well and their biggest one was 20 inches. They were biting in 6-12 feet in between 10AM-2PM. They also tried for some northern and caught 40 using mainly dark chartreuse deep diver lure along rocky shorelines in about 12 feet. The group also took a shot at Trout fishing on Isabelle Lake. They caught a few nice healthy ones with the largest being 32 inches. They also fished for smallmouth (on Anishinabi) and did amazing! They caught 90 bass and the largest was a massive 21 inches!

Unfortunately, Wright Lake can get rolling in high winds and this happened to be the windiest week of the summer! Along with some really hot weather, this group had some tough fishing conditions. They still caught over 100 Walleye and 40 Northerns. The biggest walleye was 22 inches and the largest northern measured at 38 inches. They were catching both on the weed beds and points in about 3-5 feet of water.