News | Shabumeni Is Getting an Overhaul
Previous Next

Shabumeni has always been a very popular lake. We did not open the Outpost for the last two seasons as the cabin was starting to look a little “shabby”… (pun intended). It was time to give the cabin a complete overhaul. 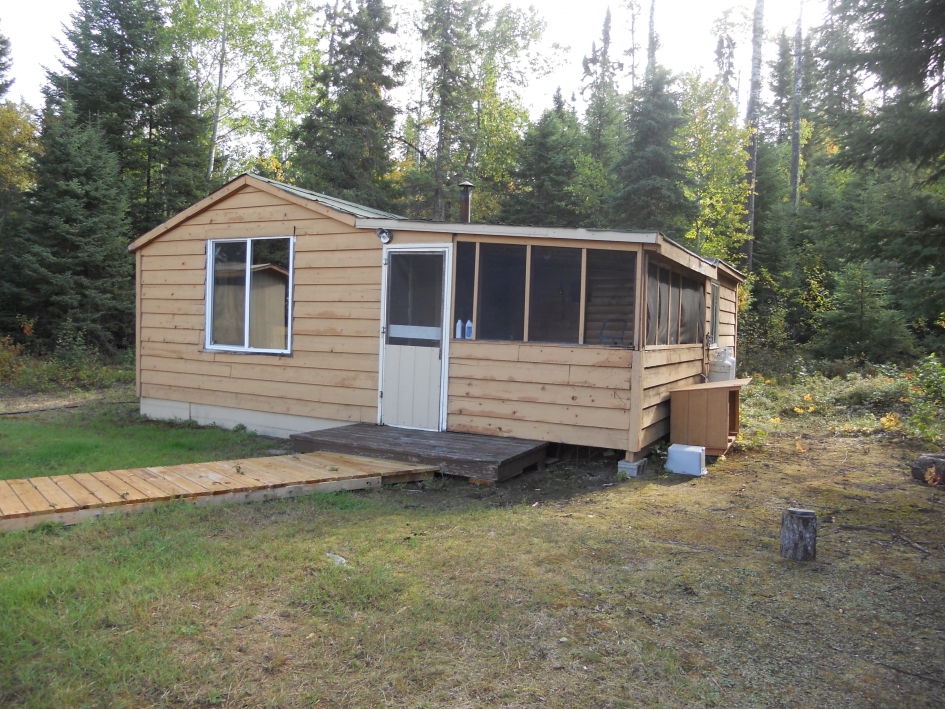 The work began already last winter when Chris and Wayne started hauling lumber and building supplies to the cabin. The conditions were excellent last winter with minimal snow and not a lot of slush, so their trip went exceptionally smooth. You can watch footage of their trip on our YouTube Channel.

By last summer, they had enough material to build the shell of the new 12 x 24-foot addition. They stream-lined the roof making it one big metal roof covering the entire cabin. The new addition will have two couches, an 8-foot bar, and the dining room table will be moved into the new room. The old screened-in porch got closed in and will now be a bedroom. They also built a large deck off the front of the cabin with seating all around it. The old dock and cribs were cleaned up and a brand-new, 100-foot floating dock will be built using our dock pontoons, and we will build new walkways throughout the entire grounds. 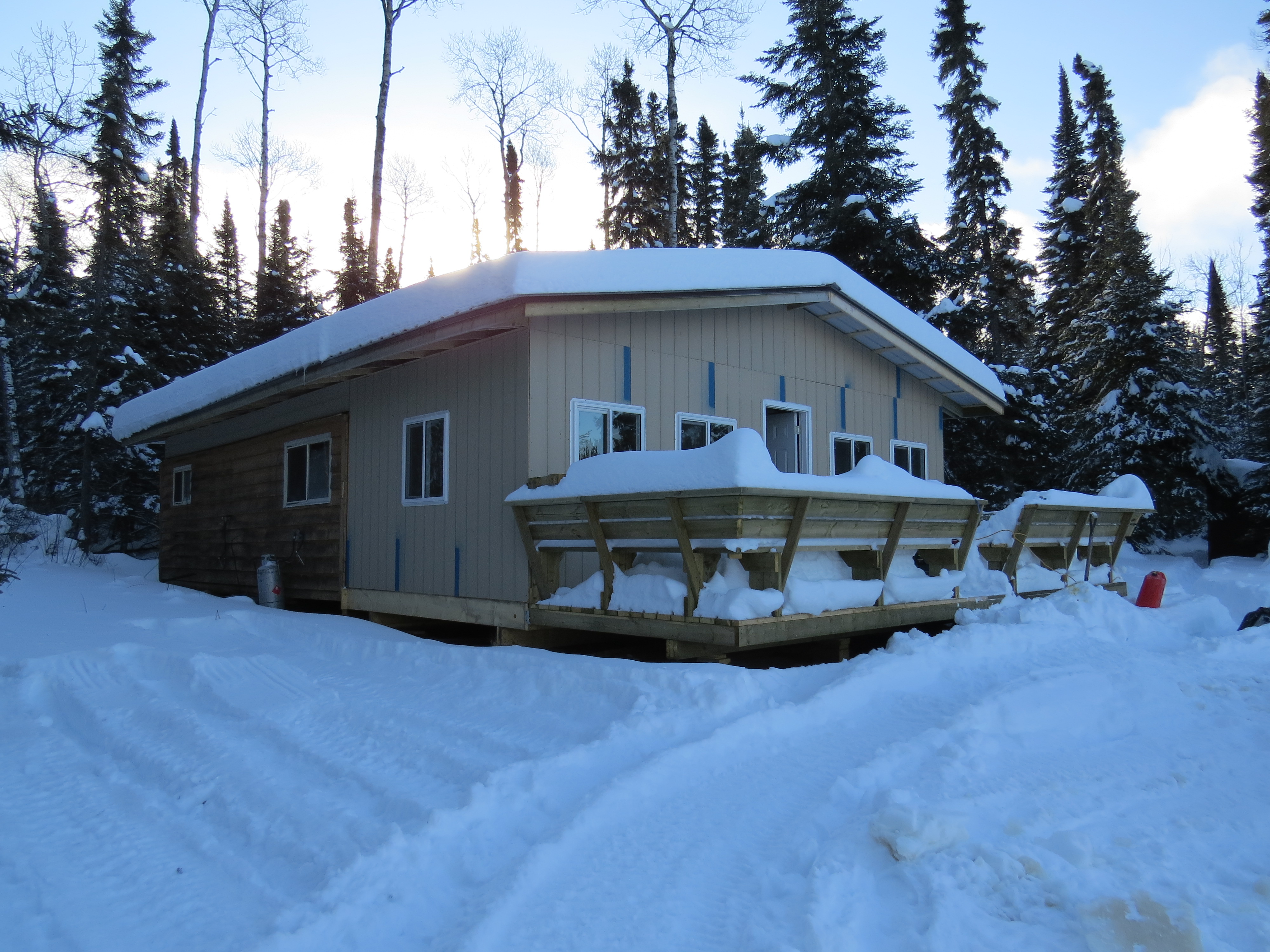 Our mission for this winter was to haul in the rest of the lumber and supplies, including tongue and groove pine, insulation, and treated lumber, and now finish off the cabin and dock before spring. Everything will be completed by opening weekend.

A few weeks ago, Wayne flew up to Shab in the Cessna (on skis) and was quite surprised to see how much more snow there is up North than there is at home. When he landed at the cabin he found himself stuck in the slush… the airplane skis were completely buried. After hours of digging and packing down a runway on foot, he was able to get the airplane going and get it back in the air.

Discovering all of the snow and slush up North gave us a good indication that our winter road excursion was not going to be as easy as last year’s. With two huge enclosed trailers packed to the roofs with lumber, supplies, snowmachines, and survival equipment, we were ready to take on the winter road, lakes, and portages. Wayne, Chris, Hank, myself (Meagan) and camera man, Damien of Epica Pictures, set out on our journey to Shabumeni on February 10th. We drove the trucks and trailers as far as we could down the South Bay Mine Road and then unloaded the Ski-Doos and sleighs. 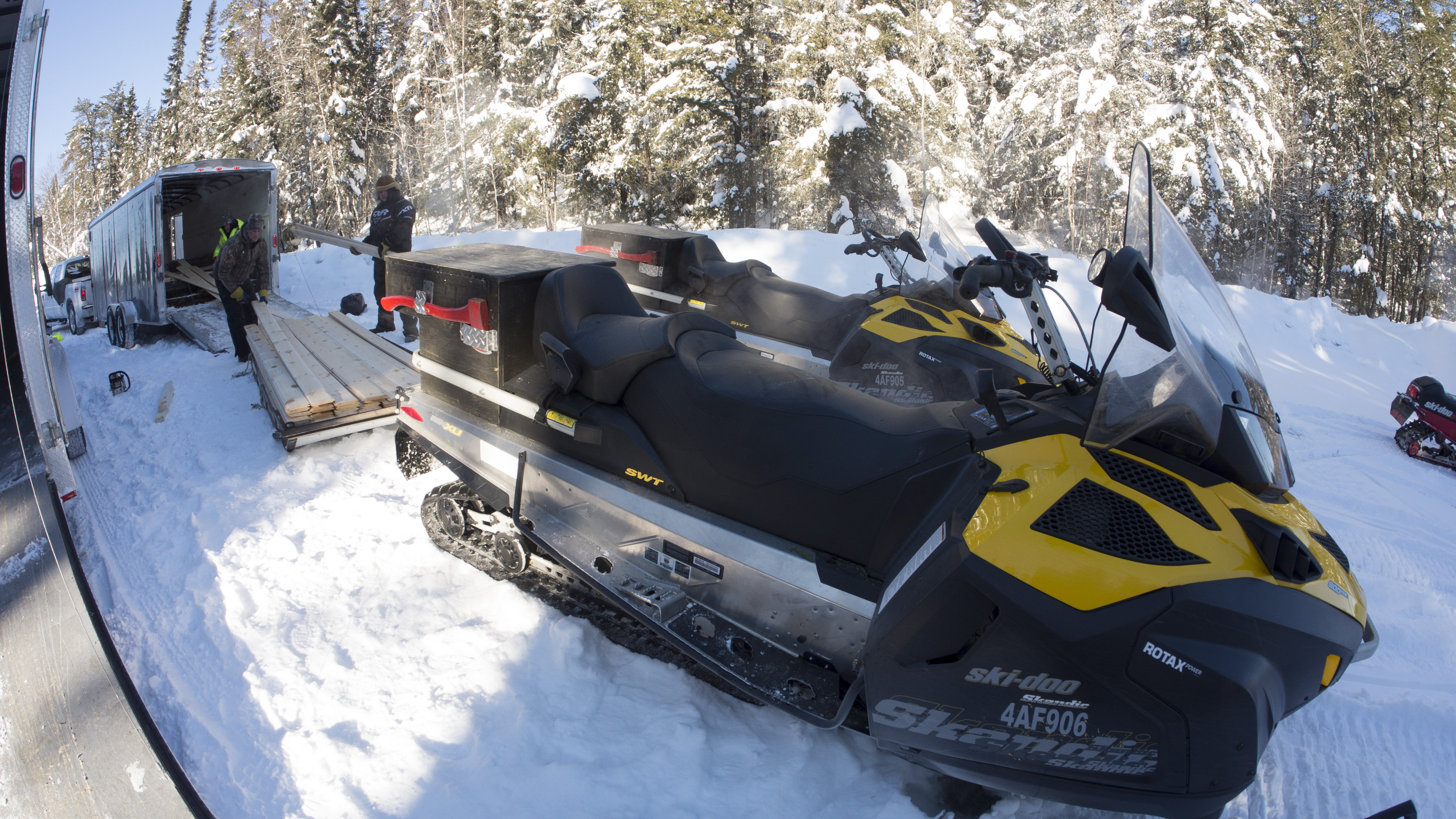 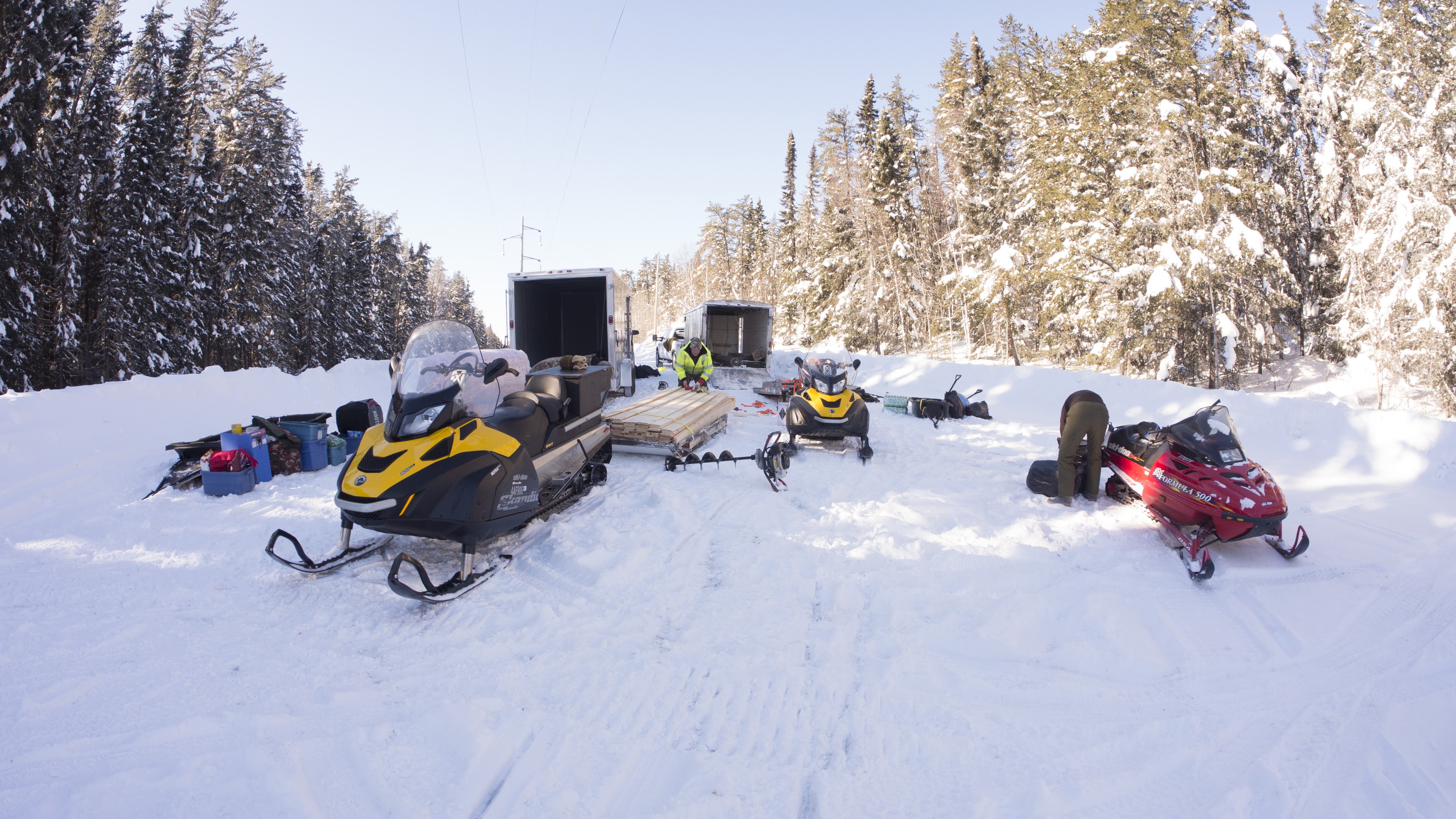 On each sleigh we packed on about 1,500 pounds of treated lumber, tongue and groove pine, insulation, and other supplies that we would need for the day and night. The plan was to come back for the rest of the lumber the next day as the trail would be frozen over and easy for traveling. The first 30 or so miles were a breeze as we were trail riding down the South Bay Mine Road. It wasn’t until we hit the second lake that reality set in. The next 20 miles were going to take us the rest of the day. 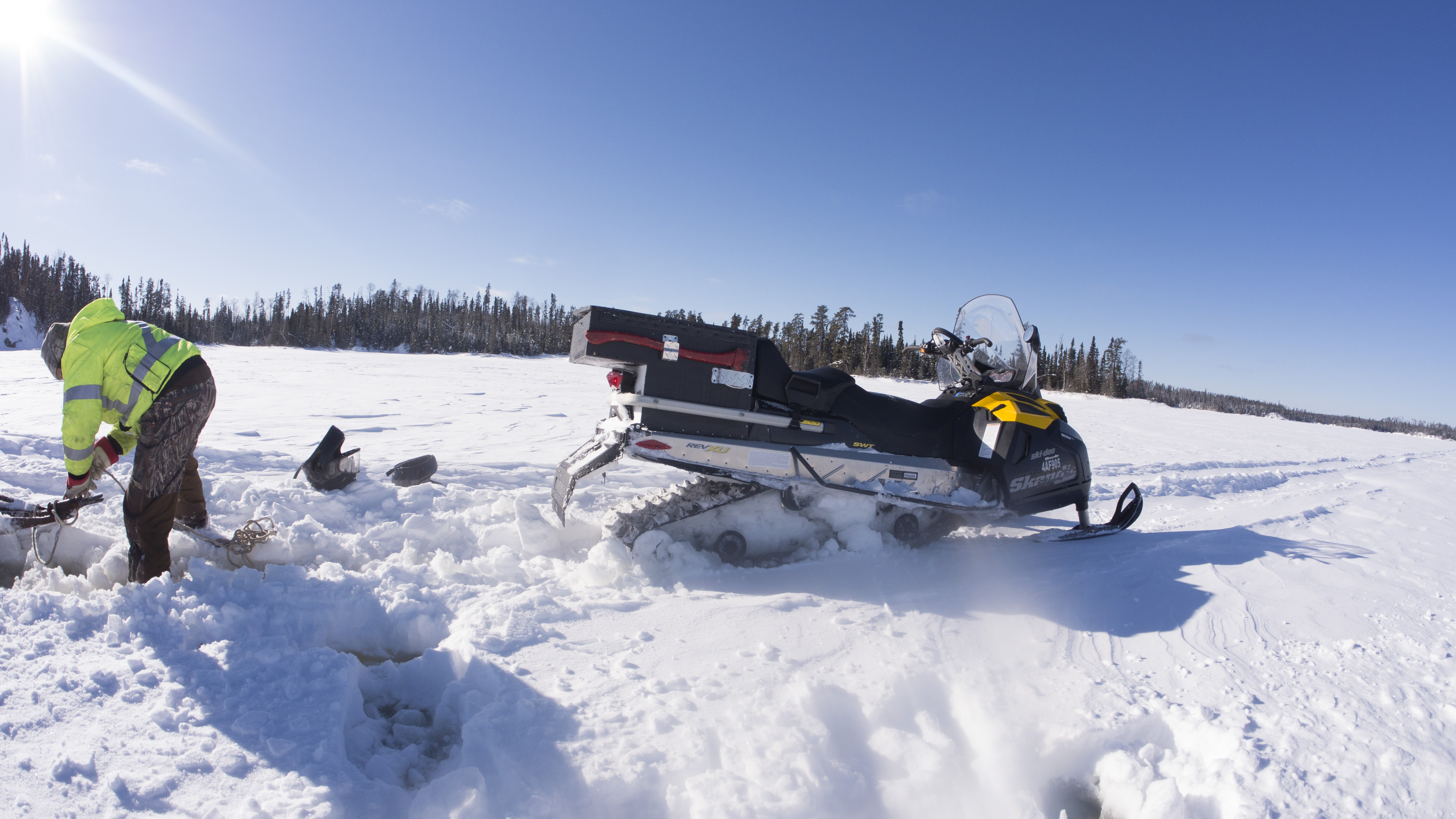 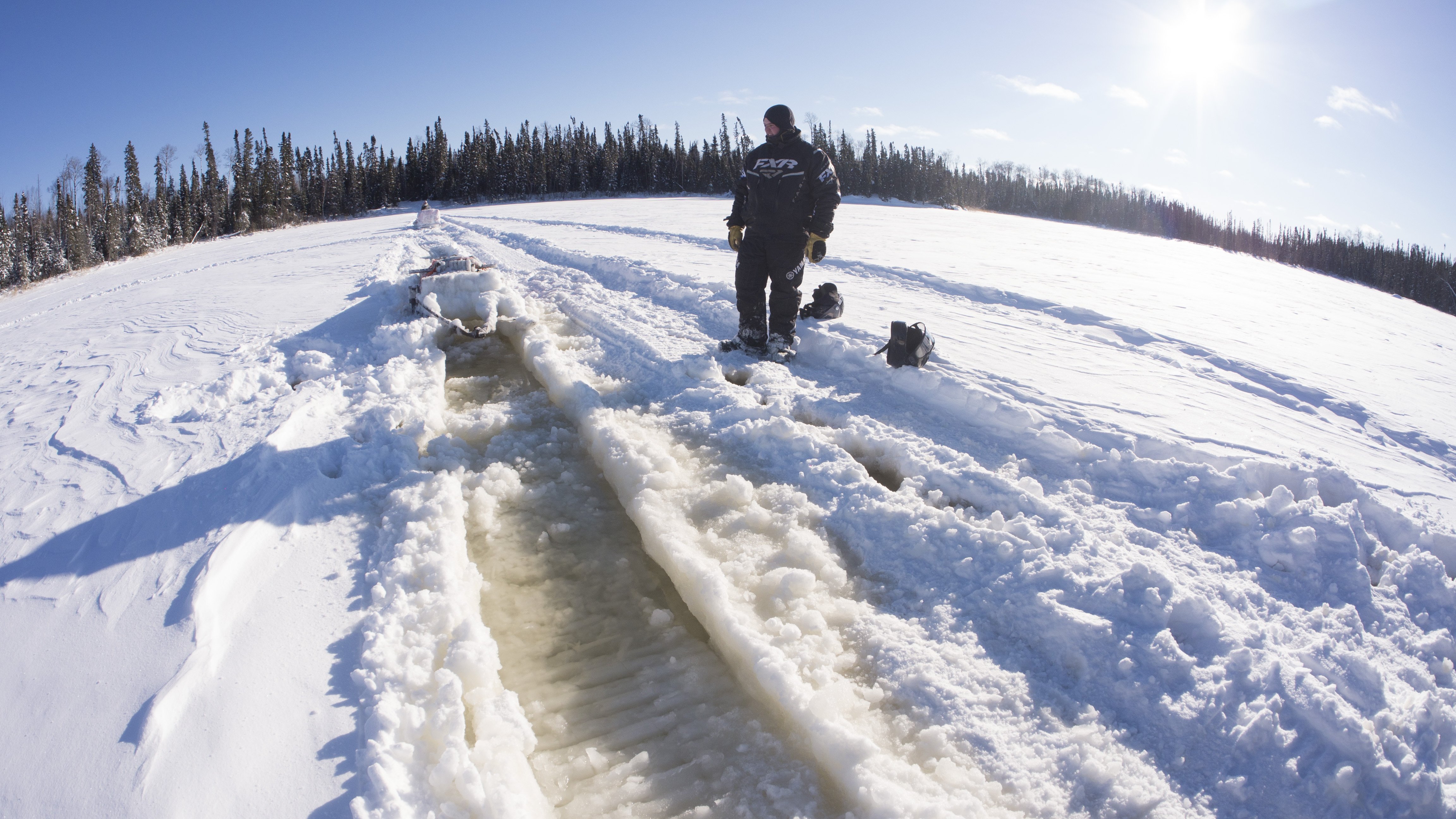 It is hard to imagine, until you find yourself knee-deep in slush, just how difficult it is to dig your machine and thousands of pounds of lumber out of a deep, sticky slush hole. After unhooking the loads countless times and pulling the sleighs across the lakes one by one behind two snowmobiles, we finally made it across the last portage and onto Shabumeni Lake. We decided to leave the sleighs on the portage and make a trail across the long lake with just our snowmobiles and small sleighs with food and survival gear. It was getting close to 5:00 p.m. and it was time to get to the cabin and start warming things up before dark set in.

Without the large loads of lumber, we made it across Shab with no problems. We discovered that Shabumeni Lake had the most slush out of all of the lakes and we crossed our fingers that our trail would freeze over by morning so that we could get the lumber to it’s final destination.

It was about -28 degrees Celcius outside and even colder inside the cabin. It took a long time to thaw out the cabin, warm up the generator, and melt enough snow to have some water to work with. Over a late dinner, we discussed our plan for the next day, which was to haul the big sleighs across Shabumeni and then go all the way back to the trailers for the second load. Despite the challenges faced with the slush and cold weather, this had been a very successful trip so far. 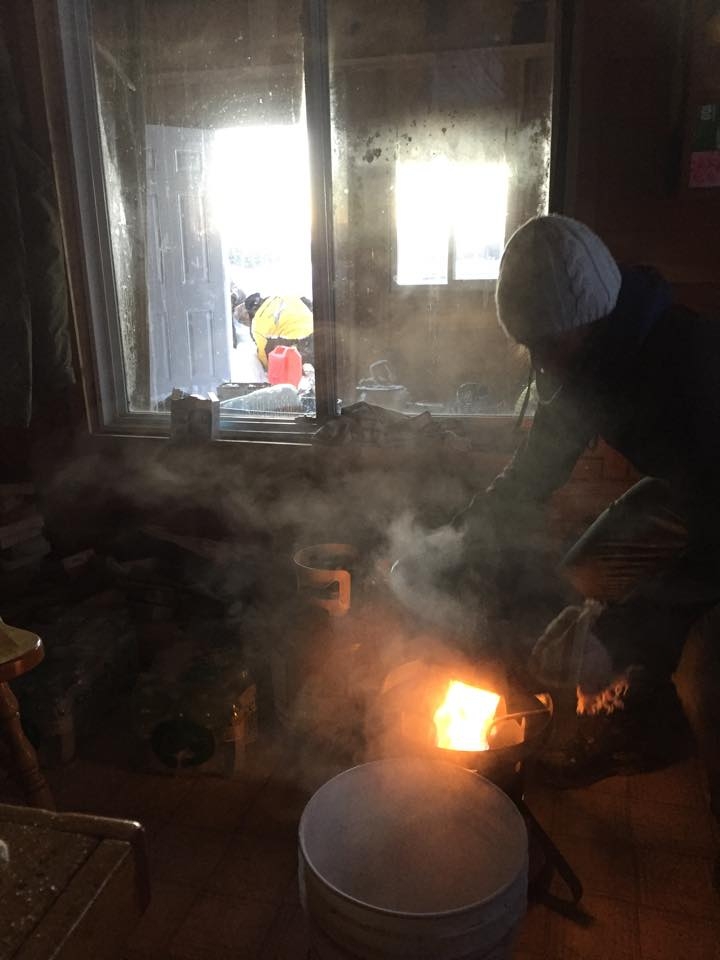 The guys went back for the sleighs that we left on the portage, and didn’t make it very far before the sleigh made with airplane skis finally broke after many trips up North. The axel broke when it hit the frozen trail. They also discovered that our trails hadn’t frozen over solid enough to carry the weight of the sleighs. Between the broken equipment and the slush, they spent most of the day just getting the first load across Shabumeni.  It was too late in the day to head back to the trucks for more so we worked around the cabin insulating, shoveling the roof, and doing other odd jobs. 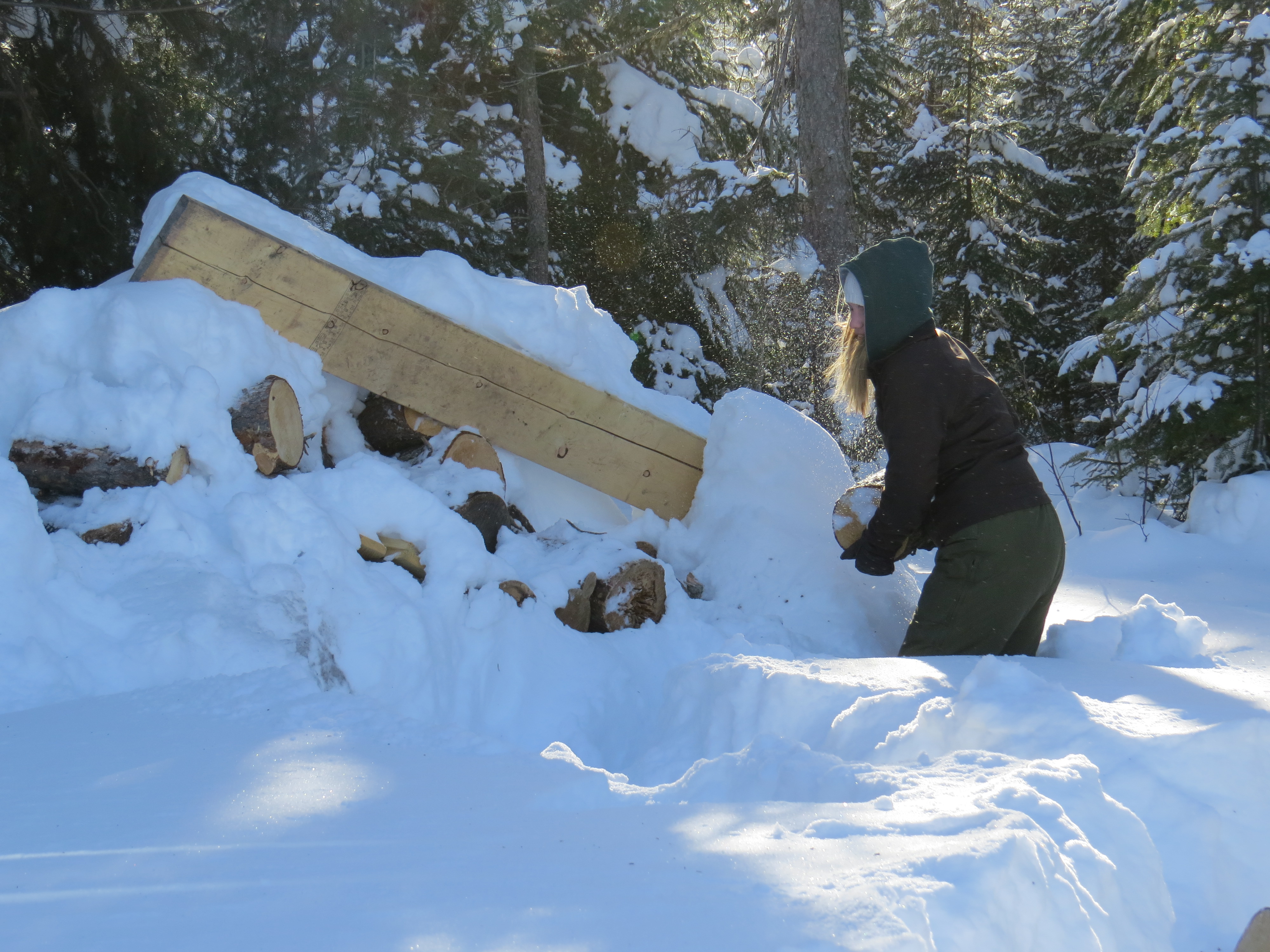 As time went on, the temperature continued to drop and the North wind became stronger. After a very cold night in the cabin, our pillows and sleeping bags frozen to the walls, it was time wake up, put on every layer of clothing we had, and head home. It had to have been the coldest day of the year with the wind chill reaching at least -40 degrees Celcuis.

Wayne gave everyone strict instructions to give a signal if anyone got cold or could feel any body part starting to freeze. We had supplies to build a shelter and a fire to warm up. With temperatures this cold, it only takes a few seconds of skin exposure for your skin to freeze.

Luckily, since we were each hauling a very light load, the way back was a breeze. The hardest part was keeping warm. Once back at the trucks, we quickly built a fire so that we could warm up our hands and feet. We needed to keep warm as it would be a few hours before we would get the trucks running as they were frozen solid. We worked on one truck at a time, heating the oil by building a tent over the truck and lighting a propane fish cooker under the oil pan.

A week later and 30 degrees warmer, Chris and Wayne decided to take one more shot at getting the rest of the material to Shabumeni. With a smaller crew, lighter load, nicer weather, and a well-packed trail ahead, they figured it should be an easy trip in and out. Fortunately, they were right! They were at the cabin by 9:30 a.m. with both loads and back to Ear Falls by lunchtime. 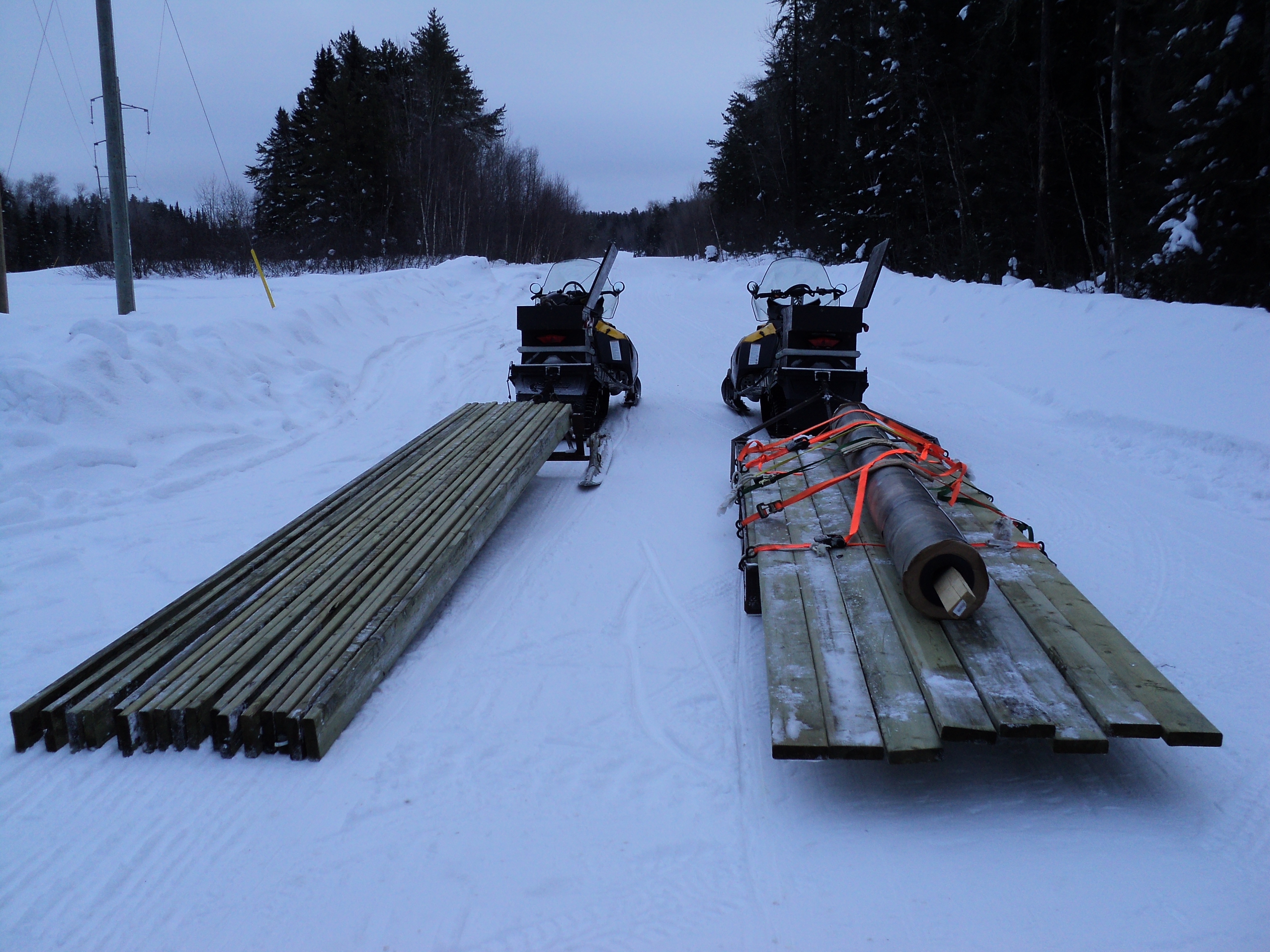 The material is building up at Shabumeni and is ready for assembly… we’d better get to work! 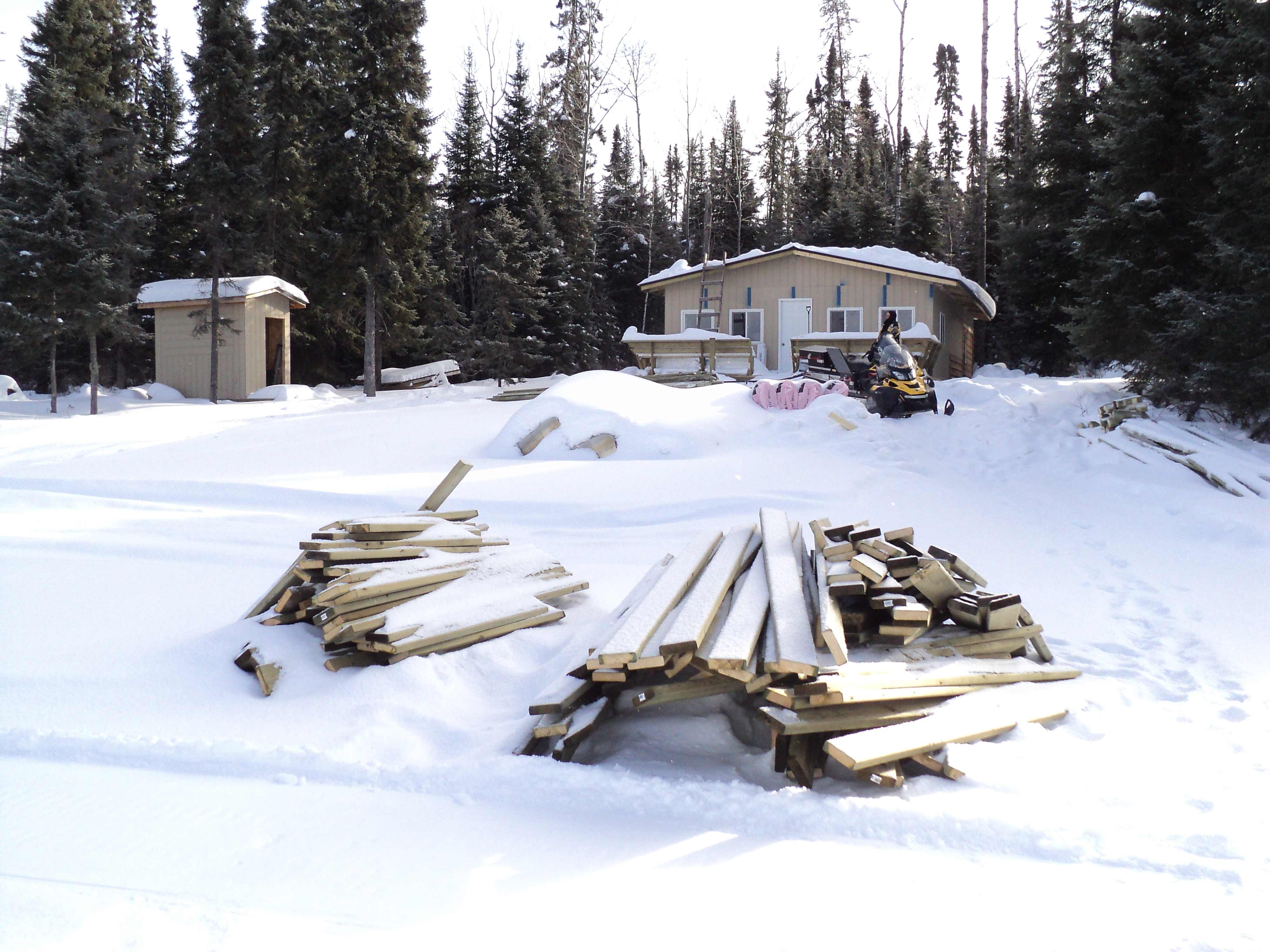 Stay tuned for the professionally filmed and edited video of our adventure by Epica Pictures. Damien got a lot of great footage... it should be a good one! We will post it on our website, Facebook page, and Blog.