Stories | Perseverance Pays Off
Previous Next 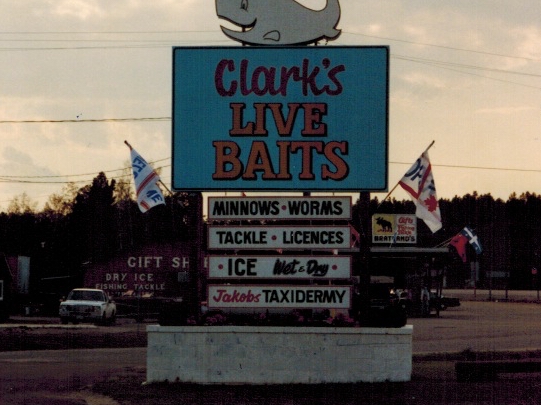 A True Story By: Wayne Clark

I would like to share a story that many people would appreciate, especially those of you who have ever ventured to start your own business, or have sought financing for a business from a bank. As a young couple in the early 80Ê¼s, my wife, Karla and I were trying to get our bait business rolling. Fur trapping had given us a decent start, but it was time to branch out. My parents had given us a minnow block which had only a few baitfish lakes on it. Using all of the lakes to their fullest capacity, we got a little business going and were able to supply a retail store and a couple of tourist camps. We really enjoyed the business and did all we could with the little resources that we had. We knew that in order to reach our fullest potential and expand the way we wanted to, we did not have near enough area to work with.

I wanted so badly to buy more bait blocks. There wasn’t much for sale in our area at that time, and even if there had been, we had VERY little money to work with. One spring, one of our main competitors and one of the larger bait dealers in the area put their business up for sale. It was listed at $120,000 including some bait blocks, a house, and a commercial property in the heart of Vermilion Bay. We had a little talk with my parents, and they agreed it would be a good business for us, even though it was priced fairly high. When you don’t have any money, it may as well have been a million dollars for how “out of reach” it seemed. These were very tough times to be going in to debt, as interest rates were at an all-time high, around 18%!!

After discussing options with my parents, they said that they could loan us some money to go towards a down payment. Combined with our little bit of savings from fur trapping, we still wouldn’t have quite enough, but it was the best we could come up with. It was now time to go to the bank and ask for financing. Picture this, a young man in his mid twenties, with no money and VERY little credit history, approaching the bank to ask for help in financing a business venture worth $120,000. All I had to my credit was a knowledge of the bait business and LOTS of enthusiasm.

My first visit, naturally, was to my current bank where I had been dealing for several years. I went in, asked to speak to the manager, and was told he was busy so I said I would wait. After about 20 minutes, I was invited into the manager’s office. I introduced myself, sat down and proceeded to lay out my “business plan”. He listened and then told me that the books did NOT support the business, and that I did not have enough for a down payment.

I remember feeling extremely let down after being turned away by the bank where I, and also my family, had been dealing for years. I got in my truck and was going to head home when I thought to myself, maybe I should visit the other two banks in town.... after all, what did I have to lose?

I went to the second bank and asked to speak with the manager. They told me he was busy, but that I could meet with a loans officer. I went into his office, introduced myself, and told him a bit about my family history, adding my new plans to expand the business. He looked at my proposal and very politely told me that it wasn’t possible at this time but wished me “good luck”! He actually seemed as if he cared a little, but apparently there was nothing he could do. Here I was walking out of the second bank with yet another rejection!

I was beginning to get the picture that my dreams were not going to be realized, and that I would have to go home and tell my family the disappointing news. I had one bank left to visit… I had very little hope, and even less to lose, so I figured I’d give it a try.

I walked into bank number 3 and asked to meet with the manager. The receptionist asked me what was the purpose for my request, after which she disappeared for a couple of minutes. She came back and said that he could see me right away. She took me over to his office, I walked in and introduced myself. I was going to shake his hand, but he didn’t seem too eager to get up from behind his big desk so I just sat down. He had a bald head, glasses and “beady eyes”. From the moment I walked into his office, I didn’t have a good feeling about this man. He asked what he could do for me, so I gave him my “pitch” along with showing him the books, adding that if I could just get a chance I know that I could make it work. He spoke up and told me that there wasn’t near enough revenue that would be needed to support the payments on a loan of this size. I then told him that if I got the money and was given the chance, I could gross $100,000 in bait in just the first year. I’ll never forget this moment or his response for the rest of my life. He looked at me over the top of his glasses and said “Well, young man, I guess we should ALL get into the minnow business then!”. He followed with a short, “Sorry we can’t help you”. I got up from my chair, my legs feeling like rubber, knowing that this was about all the rejection I could handle for one day!

With my head hanging low, I walked out of his office. There was a young man standing outside the doorway, apparently having heard part of our conversation, he asked if I would step into his office for a moment. I didn’t know his position with the bank at this time, but I went in and sat down. He introduced himself and shook my hand. He then explained that the manager with whom I had just met with was retiring soon and that he would be taking over the position. Next, he asked me to explain more about the minnow business such as how I would catch the minnows, and to whom I would sell them. He was very polite and actually showed interest after listening to the passion in my voice and the longing for a chance to prove what we could do. I explained everything along with our family background in the business. He said I was definitely short of a down payment, but I answered that all I needed was one summer with the new business, and I could make extra payments in the first year to make up the “short-fall” in the down payment. He paused for a bit, and I could see he was thinking of different options. I then told him that if he could give me the chance, I would work 7 days a week as long as necessary, certainly as long as it took to pay off the loan! He then asked me to give him a couple of days and he would see what he could do for me. We shook hands and I thanked him sincerely. I left the bank feeling on top of the world as somebody had actually cared enough to ask some questions and take a closer look at my plans.

It was the longest few days of my life, waiting for that phone call. After about a week, a few more bank appointments, and a mountain of paperwork, the deal was done! The business was ours and our 7-day work weeks began.

As I think back to those few days, over 30 years ago, I realize those were the most important days of our career. It’s amazing to think how fragile one’s destiny really is. If it hadn’t been for my parents loaning us the money for the down payment, and that one banker who actually cared enough to listen to a young man talk about his dreams and give us a chance, we may never have been able to come as far as we have. This banker is long retired from the bank, but hopefully he’ll read this story and will drop me a line to let me know that I can finally back off from working 7 days a week!